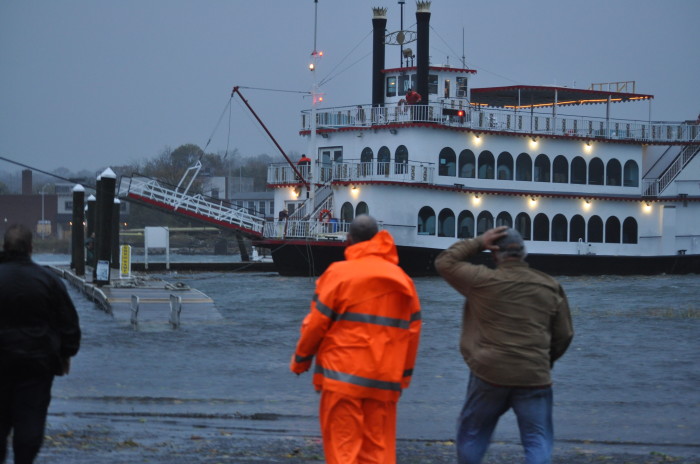 Norwalk’s river boat, The Island Belle, is towed toward shore Oct. 29, 2012. The tow cable broke minutes later and the boat headed across the harbor.

It really has been 10 years for NancyOnNorwalk and to prove it, we’re reposting our first story. (The original version is here.) Note: the story text has not been updated to reflect that it’s historical. So if it says Monday, we mean Monday, Oct. 29, 2012.

NORWALK, Conn. – A controversial river boat smashed its dock at Veterans Memorial Park Monday evening as workers tried to reposition it in high winds, traveling across Norwalk Harbor and hitting the wall on the other side as Hurricane Sandy’s effects were being felt.

Pieces of the Visitor’s Dock stretched across the harbor after The Island Belle broke free. A worker from Nat’s Garage had been trying to tow the massive boat from its mooring in the harbor’s channel to the shallower portion of the dock, nearer land and parallel to the Stroffolino Bridge. As the boat drifted across the channel the worker pulled the cable out to discover that it had snapped.

The Island Belle has been a source of contention between harbor keepers and city officials, as first reported by this reporter. Tony D’Andrea, chairman of the Harbor Management Commission, said the commercial vehicle was there in clear violation of the rules. The boat’s lease ran out on April 30 but it was still at the dock on a month to month basis. The Army Corps of Engineers recommended in June that the 110-foot long, three story high boat leave the dock.

Some observers complained that the Visitor’s Dock was not built for a boat of that size.

A member of the Harbor Commission, who declined to be identified, said workers were trying to position the Island Belle to the safer inland spot to prevent it from breaking free and smashing docks on the other side of the river. A short while later it became apparent that the boat was out of control. Its front gangway hit the dock’s posts and pieces of dock were strewn across the water.

Two workers in red jackets on the boat’s top deck ran about and the boat drifted across the harbor as its rear paddle turned as quickly as possible, seeming to have no effect.

Emergency vehicles arrived on the Water Street side of the harbor as the boat approached, their flashing lights visible through the windows of the Island Belle. There was a loud bang as the boat made it to the other side.

At that point, Deputy Police Chief David Wrinn told this reporter to head for safety.

The Harbor Commissioner present at the scene promised that the matter would be taken care of after the storm. That was before the boat broke free.

The boat was secured to the seawall, Deputy Fire Chief Ed Prescott said.

Hart said at 2 a.m. Tuesday that his boat is moving to Stamford next week, adding that workers involved in the effort were heroes as the boat did not strike the Stroffolino Bridge. “We saved Norwalk,” he said.

Winds were blowing at about 80-90 knots at the time, he said. The boat was undamaged. The safety on the gangway gave way when it hit the pilings, causing it to retract into the boat, he said. He speculated that the Vistor’s Dock pilings that gave way were weakened by age.

Congratulations Nancy! Ten years of objective and timely reporting, always striving for the truth. Many more!