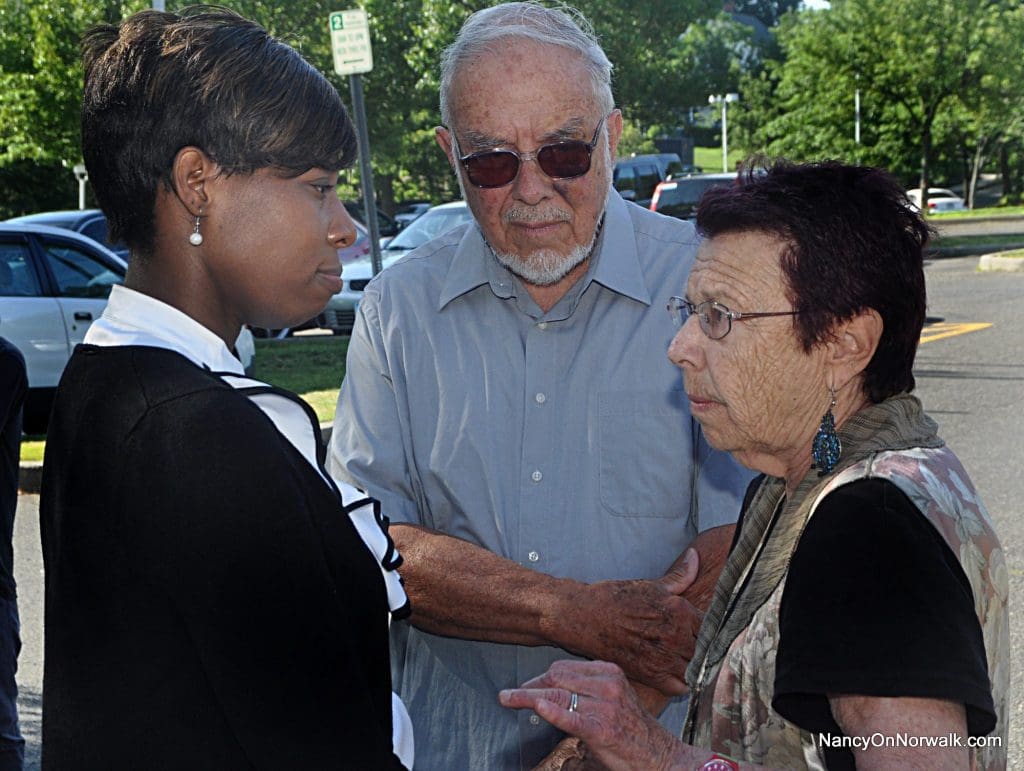 From left, Norwalk Democratic Town Committee Chairwoman Amanda Brown, District E Chairman Bill Krummel and Regina Krummel chat on July 7 at City Hall before announcing that they have worked out their differences and are ready to move on.

NORWALK, Conn. – Today we bring you the final story in our Top 12 countdown – the 12 stories that drew the most page views on this site in in 2013.

Our most-read story of 2013 was “Norwalk Dems battle in City Hall parking lot.”

We have been rehashing our most popular stories, with a links to the original stories. We began Saturday, Dec. 21, with the 12th most popular, and worked our way to No. 1.

Our most-read story of 2013 was posted July 3 after NancyOnNorwalk received a tip about an altercation involving members of the Democratic Town Committee. The story, along with a contributed photo, not only grabbed the attention of Norwalkers, but went nationwide when it was picked up by Wonkette.com.

The incident erupted when a verbal dispute between Democratic Town Committee Chairwoman Amanda Brown and Regina Krummel, who wanted to be put on the ballot as a Board of Education candidate. Somehow, Krummel wound up on the ground, and her octogenarian husband, Bill, the DTC’s District E chairman, confronted Brown, slapping her face. Brown then punched Krummel, cutting his eye.

Calls came fast and furious for Brown’s resignation and arrest. Others rushed to her defense and pointed out the Krummel hit her first. But accounts by the participants differed, and no one witnessed the entire incident. The Krummels and Brown all declined to press charges, and there was a public reconciliation.

To see our coverage of the reconciliation press conference, click here.

Brown wrote a letter to the editor defending her actions. Click here.

7: New Board of Ed gets off to rocky start