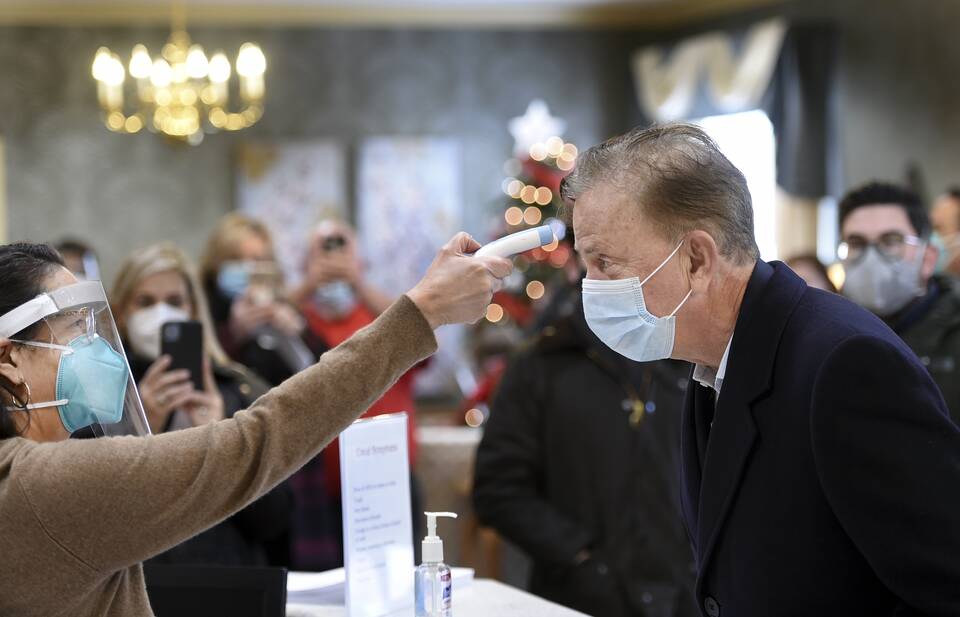 Gov. Ned Lamont gets his temperature checked at The Reservoir nursing home in West Hartford before watching staff and residents get vaccinated against COVID-19. (AP)

To borrow from President-elect Joe Biden’s favorite Irish poet: Things most assuredly fell apart in 2020, and, no, the center did not hold. The jury is still out on whether anarchy was loosed upon the world.

The calendar lost meaning, months marked by cycles of COVID-19 spikes, lockdowns and reopenings. Amid it all, America elected a president and protested racial injustice in the wake of the coldly casual death of George Floyd under a policeman’s knee in Minneapolis.

Connecticut gave its mild-mannered governor unprecedented and near-total emergency powers. The state Capitol closed one day for a “deep cleaning” in March and never reopened to the public, making exceptions for reporters and lawmakers during brief special legislative sessions in July and September.

Graduations, weddings and funerals were shrunk, delayed or canceled. Political nominating conventions were conducted by Zoom. Victories were noted by the moderators informing candidates, “You are unmuted.”

Offices emptied, and white-collar workers were sent to the safety of their homes. Essential workers turned out to be some of the lowest paid. They cared for our infirm and sold us groceries.

It’s hard to remember much before March, when the pitiless virus ravaged metro New York, eventually sneaking up I-684 and I-84 before announcing its presence in Connecticut on a Friday night in Danbury.

But there was a January, the warmest on record, and a February. Things actually happened then — an impeachment trial, for one. Gov. Ned Lamont and President Donald J. Trump each made misjudgments in the year’s first weeks.

Lamont’s would soon be forgotten. Trump’s would prove fateful.

The governor told reporters in January that he was confident that the General Assembly finally was willing to support a 10-year, $19 billion transportation spending plan that would require tolls for tractor trailers on a dozen highway bridges in Connecticut.

Gov. Ned Lamont started off the 2020 legislative session with his State of the State address at the State Capitol. (Joe Amon, Connecticut Public Radio)

It wasn’t resolved. In February, Lamont declared the plan dead, concluding that state Senate Democrats might never say no, but they wouldn’t say yes, either. It was a political setback for a struggling governor — at the time, one that seemed monumental.

Connecticut and Lamont moved on, each consumed by assessing and mitigating a pandemic.

On Jan. 22, the president dismissed concerns about the outbreak of COVID-19 in China and its detection in the U.S.

Eleven months later, 330,000 Americans are dead, the economy is in tatters, and Trump is an aggrieved and angry lame-duck president.

It offered a unified theory of every ill in America: It’s all the Communists, but only the ones in China, not Russia. Two days before Christmas, the president of the United States shared it without comment to his 88.5 million Twitter followers.

In what inevitably will become his legacy, Trump turned on fellow Republicans who acknowledged Biden’s victory. His fury at Senate Majority Leader Mitch McConnell, R-Ky., clearly is an element of his threat to veto a $908 billion relief package  desperately needed by small businesses and the unemployed.

The president hinted Dec. 27 on Twitter that he would sign the measure, which was attached to a bill necessary to avert a government shutdown. About two hours later, the New York Times and others reported that indeed he had.

Lamont, who labored to maintain a constructive relationship with the White House during the pandemic, publicly bemoaned the president’s “erratic behavior” and implored him to sign the relief bill.

“We really need you to be steady and give our small businesses this opportunity,” Lamont said.

It was just another sign that 2020 was ending for the president as it began, in tumult and on Twitter.

In early 2020, the first hints of the extent of the crisis

On Feb. 5, the U.S. Senate acquitted Trump, the impeached president, without calling a single witness. The previous night, the president refused to shake the proffered hand of House Speaker Nancy Pelosi before the State of the Union. At the conclusion of the speech, Pelosi tore up her copy.

In Hartford, the General Assembly opened its annual session on a friendlier note, welcoming a cheerful governor who noted a mildly favorable Wall Street Journal editorial about Connecticut’s finances.

Lamont made much of the rare positive nod to the state’s finances and asserted, “Connecticut, we got out our mojo back.”

Largely overlooked that same week was sad news: A youngster’s death from the flu, the first in a child and the 32nd overall in Connecticut since October.

A month later, no one would be talking about the flu.

Connecticut had only two confirmed cases at the time. Other governors waited before declaring emergencies, and Lamont consulted with some of them, including Jay Inslee, the governor of hard-hit Washington.

Dr. Matthew Cartter, the state epidemiologist, matter-of-factly informed the public during a televised briefing the next day that COVID-19 was here, people would die and the public-health focus was on slowing the disease, not containing it.

“It is only a matter of time before we have widespread community transmission,” Cartter said.

Critics accused him of being alarmist, and worse. 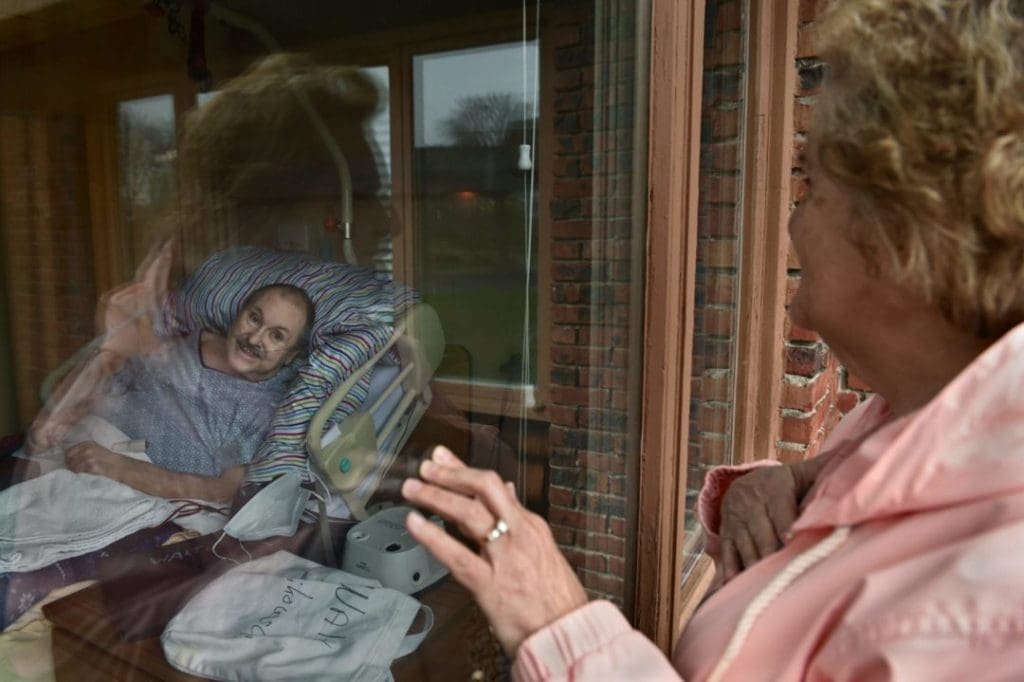 Donna Sullivan visits with her long-time partner, Walter Zbikowski, separated by a window at Parkway Pavilion Health and Rehabilitation Center in Enfield last spring. Sullivan visited often until March 6 when nursing homes across the state were put on lockdown. (Cloe Poisson, CTMirror.org)

On the advice of public health experts, Lamont ordered the closure of restaurants, bars, theaters, barber shops and nail salons and set limits on public gatherings. On St. Patrick’s Day, the two tribal casinos closed for the first time since opening in the early 1990s.

The virus did more than just ravage the elderly and those in congregate settings, like nursing homes; it also exposed fault lines and inequalities in society, killing Blacks and Hispanics at greater rates than whites.

On Sept. 24, Lamont announced that Connecticut would move to a third phase of relaxing COVID restrictions, beginning on Oct. 8.

The General Assembly which had suspended its session in March, but it returned in July, primarily to take up a police accountability bill as thousands of Connecticut residents took to the streets to protest racial injustice and police brutality in the wake of George Floyd’s death. 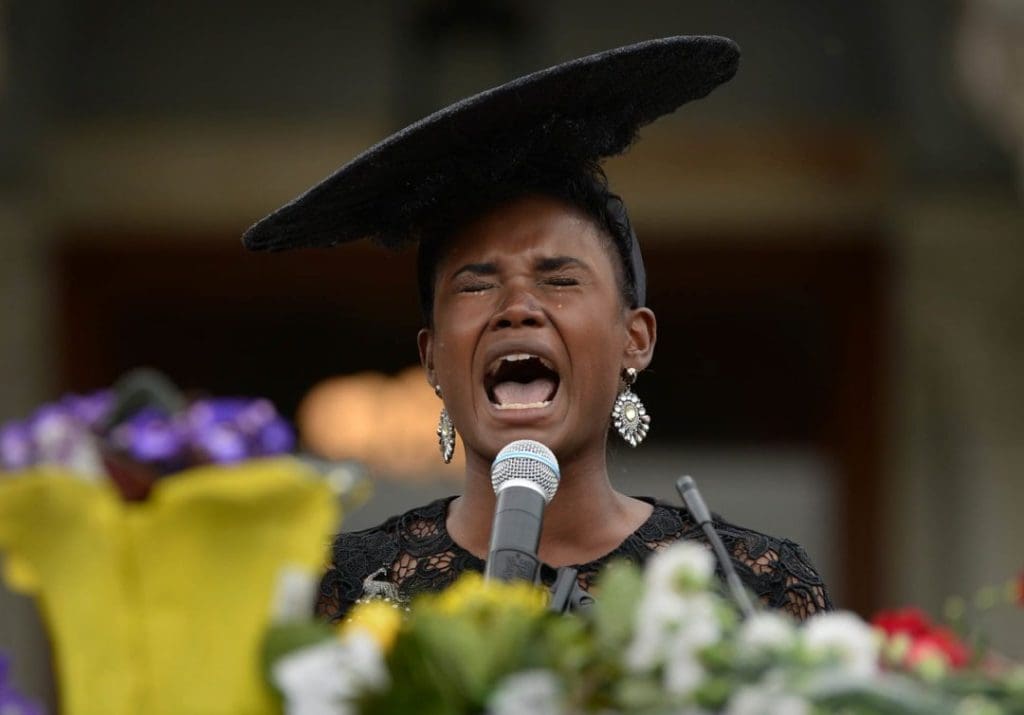 With tears streaming down her face, Melinda Johnson speaks with intense emotion before a casket topped with flowers at a mock funeral at the state Capitol in Hartford for George Floyd, who was killed by Minneapolis police on Memorial Day. Johnson is Director for Community Engagement and Advocacy at the YWCA and was the event organizer. (Cloe Poisson, CTMirror.org)

What started as an exercise in consensus lawmaking became polarized over the extent to which the bill limited the qualified immunity enjoyed by police and exposed them to litigation. It was one element of a sweeping bill, but it became the all-or-nothing provision for both sides.

With police unions uniformly opposed, only one Republican voted for the measure.

The bill created the office of an inspector general to investigate complaints of police misconduct, requires police and correction officers to intervene when witnessing brutality, mandates body and dash cameras, bans chokeholds in most circumstances and clarifies that deadly force can be used only when police exhaust all reasonable alternatives.

It revamps and empowers the Police Officers Standards and Training Council, giving it the authority to decertify a police officer — revoking a necessary credential for employment. 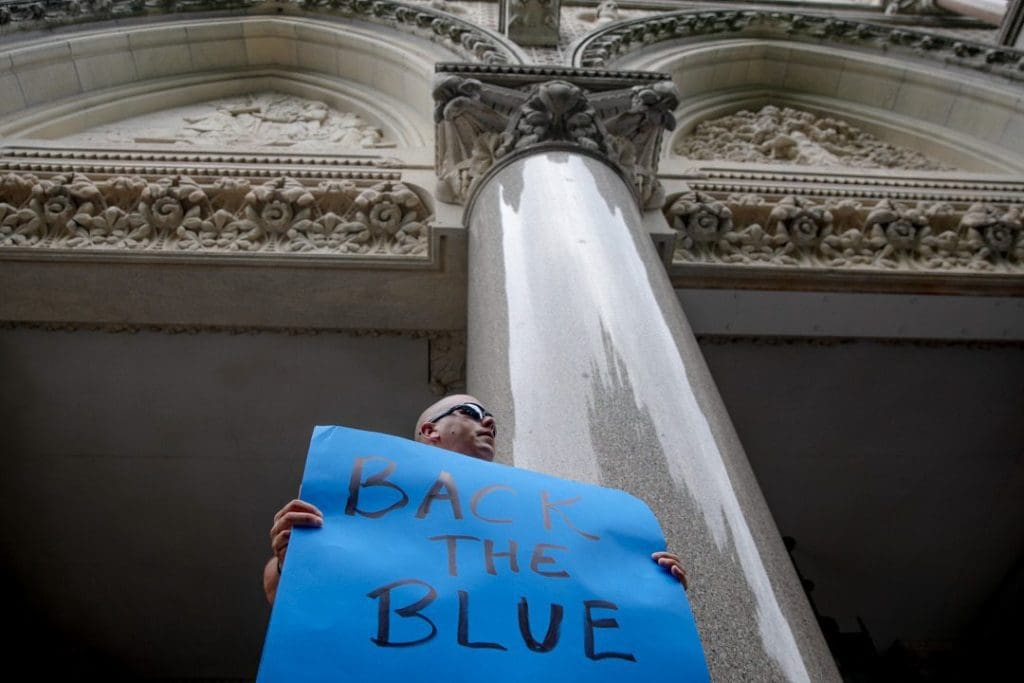 A police supporter protests outside the state Capitol on July 23 as lawmakers prepared to take up the police accountability bill. (Yehyun Kim, CTMirror.org)

But while lawmakers tackled police accountability, they took a pass on broader equity measures, rejecting calls to reform laws that have led to some of the worst housing segregation in the nation.

The highest-profile measure was a legislative response to a massive blackout after Tropical Storm Isaias in August. It directed regulators to implement a performance-based rate system that would favor ratepayers over shareholders.

Partisanship took a holiday as the legislature confirmed judicial nominations, passed bills and bid farewell to leaders of both parties in its last scheduled meeting before a new legislature takes office in January.

Democrats picked up seats in 2020 for the second consecutive election, each time benefitting from the president’s unpopularity in Connecticut. Democrats won majorities of 97-54 in the House and 24-12 in the Senate.

But as the virus surged again in the fall, there was some good news among the bad: a vaccine. As Connecticut residents prepared for a holiday season unlike any other, the first vaccines were given to front-line health care workers as a cold rain poured down on the state.

The 2021 session opens on Jan. 6. Weather permitting, lawmakers will take the oath outdoors, a nod to a novel coronavirus that lingers, unaware the calendar is flipping to a New Year.