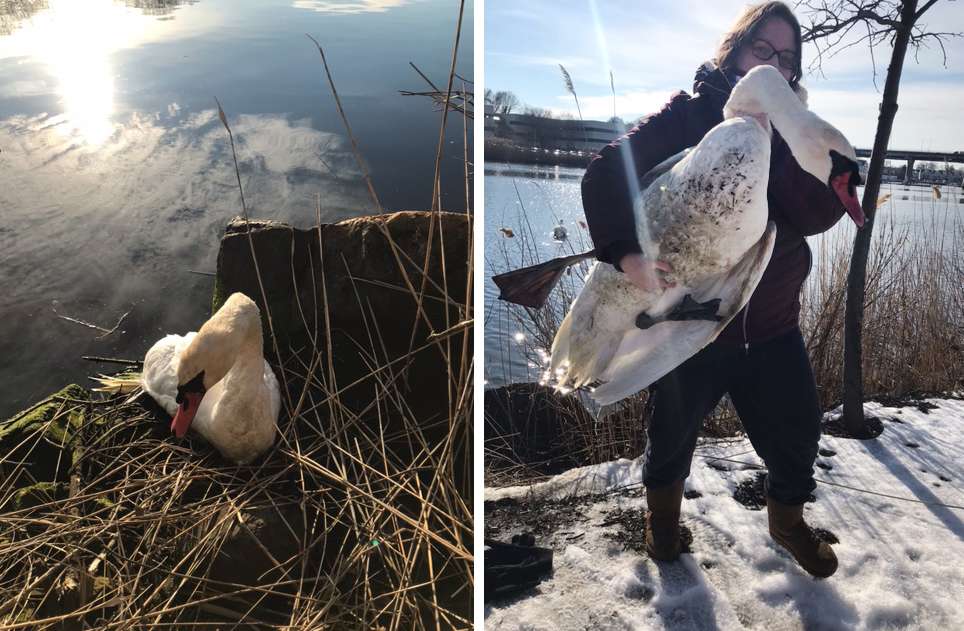 The swan laying by the Norwalk River, at left. Wildlife rescue volunteer Lisa Dickal with the swan, right. (Contributed)

Early January was our last time on the water rowing at Maritime Rowing Club upriver in Norwalk. Our club is north of the Yankee Doodle Bridge on the Norwalk River which had been ice bound mostly on and off during January and February. Reports were that warmer weather would come the week of Feb 22. Could that be, we wondered, while the snow was flying and the ice was forming in mid-February?

Our coaches said yes to Wednesday, Feb. 24, and sure enough the water was free of ice and the sun was bright at the 7 a.m. dock time. I was so excited. Seagulls screamed and swans flapped their wings as I walked down the ramp. The docks still had snow and ice, but the water looked super. High tide, no wind and flat water. We kicked the snow away on the dock, pulled the Alden boats to the water and had at it. Two rowers, two coaches. What a great feeling to be back on the water!

Coach Yulia in a chase boat guided me in my rowing single. Before the first bend, we saw it: three swans near the west side of the river, one seemingly weak and hurting. The other swans were encouraging it by pushing it to wake and come back.

I stopped. The scene was captivating. Two siblings perhaps helping an older, parent maybe, to perk up, not give up. I felt a tightness in my throat. Maybe we could help. Might the swan be injured or tied in fishing line.

Yulia was on the walkie talkie with the other coach, Johnston. Should we call the Animal Rescue? Johnston was concerned too, but he had had an experience of calling only to be told that he had to bring the wild animal to the center. Picking up the swan seemed risky. And yet, we had to do something.

I rowed closer to observe. The other swans had paddled away. The swan looked to be an adult. With its neck wrapped in a sleeping position, the swan seemed helpless, moving only slightly. One wing looked awkward, I noticed some blood on his white feathers.

We returned to the boathouse and walked over while calling Animal Rescue (left a voice message). We brought towels and water. The swan was resting a few feet from the water’s edge behind a rock and less than a couple of yards from the back road leading to our boathouse. Looking closer, the weakness of the swan was apparent. Was it an injury? (No fishing line was visible.) Was it sickness? Were we just going to hang with him while he passed?

Seemed docile as we approached. I had a plastic water holder for my dog which I placed next to him. Yulia poured water over him, into the container. He revived enough to drink it. We got some bread from the boat house. He accepted some.

Lisa Dickal from Animal Rescue called back. She said she could be there in 30 minutes. Lisa asked us to send photos. I did. In a text she suggested lead poisoning. The other two swans paddled back while we waited. We moved a few yards away in case they protectively became aggressive. One came closer to the weak swan and yikes…attacked. The young swan began grabbing the weak swan’s neck with its beak and thrashing it back and forth. We threw some snow at the swans and they retreated. The weak swan moved in a clumsy way up closer to the road.

Had we all misread the first scene? Had the younger swans been attacking all along?

Lisa arrived (from Shelton) and without hesitation went straight to the swan, gently grabbed his neck and scooped the rest of him in her arms, easily 35 pounds. He offered no resistance and I offered to open the car door for her. She nodded. 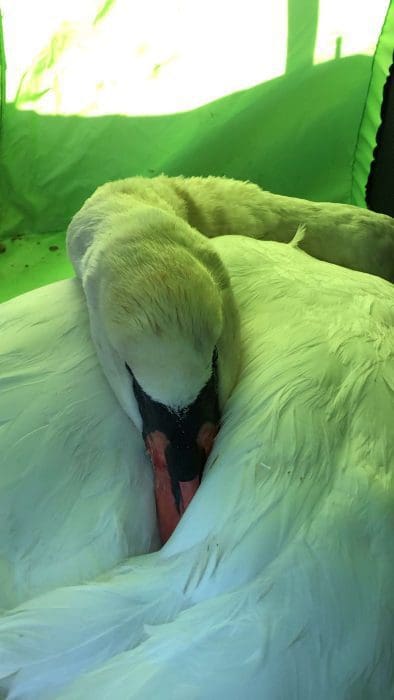 The swan the swan in a dog carrier, in the backseat of a car. (Contributed)

The back seat had a dog carrier unzipped. She placed him in gently, covering him with a towel. What next, I asked. She would take him to the Norwalk Veterinary Hospital for a check-up and a blood test for lead poisoning. If the poisoning was too extreme, he would be euthanized. If he could recover, he would be sent to Animal Nation located in South Salem, N.Y. near the Wolf Center. Patrick Moore, the VP there would pick him up.

I asked how many folks like herself would come to pick up an injured/ill wild animal. Lisa said in the Fairfield County area, it was only Patrick and herself. She is a Connecticut-licensed wildlife rehabilitator. The work is all volunteer.

A few hours later I called the vet hospital to check up on the swan. I asked if they had a swan there, (did I have the right place?) and if so, how was the swan doing. She told me the swan was stable and eating. How did the lead poisoning test come out? She asked if this was my swan. I told her no, the swan was wild. She said she could not share that information. (HIPAA for wildlife?)

Later Lisa texted that the swan had been moved to Animal Nation. His issue was starvation. She sent two short video clips. One with the swan eating from a bucket of stuff in water that looked like cereal puffs and the other of our Norwalk swan in a warm therapy tub with another swan.

From helplessness to health in the span of half a day.

While rowing has so many layers of good, the dominant one is teamwork. Between the teamwork of concerned folks, volunteers and animal doctors, I experienced more than a wonderful first spring day back on the water, I experienced a memory.

Mary Ellen – Thanks to you and the other members of the Maritime Rowing Club for allowing compassion and empathy for another creature to compel you to alter your plans for an “almost-Springtime” row. I firmly believe that “doing good is its own reward”, and am therefore confident that the satisfaction derived from your compassionate act more than compensated for the delayed gratification of getting your row in on your original schedule. Thanks also for writing a compelling account of your experience.

A wonderful story send by wonderful caring people. Thank you for staying with the swan until help arrived.

What a great story! Our community at it’s best. A refreshing change from the usual sturm and drang of the politics of Norwalk.

What a refreshing story and a great tribute to the rebirth and renewal associated with spring. The photo of Lisa Dickal reminds me of the times my daughter, who plans to be a vet, would rescue wounded birds and squirrels in the backyard totally unafraid and full of compassion for them.

Thank you for sharing this lovely story! The video clips were great. So nice to see a story with such a wonderful happy ending. God bless you for caring and going the extra bit to save this beautiful creature. This so lifted my spirits today! As my sister always says “happiness happiness!” The world needs more of it.