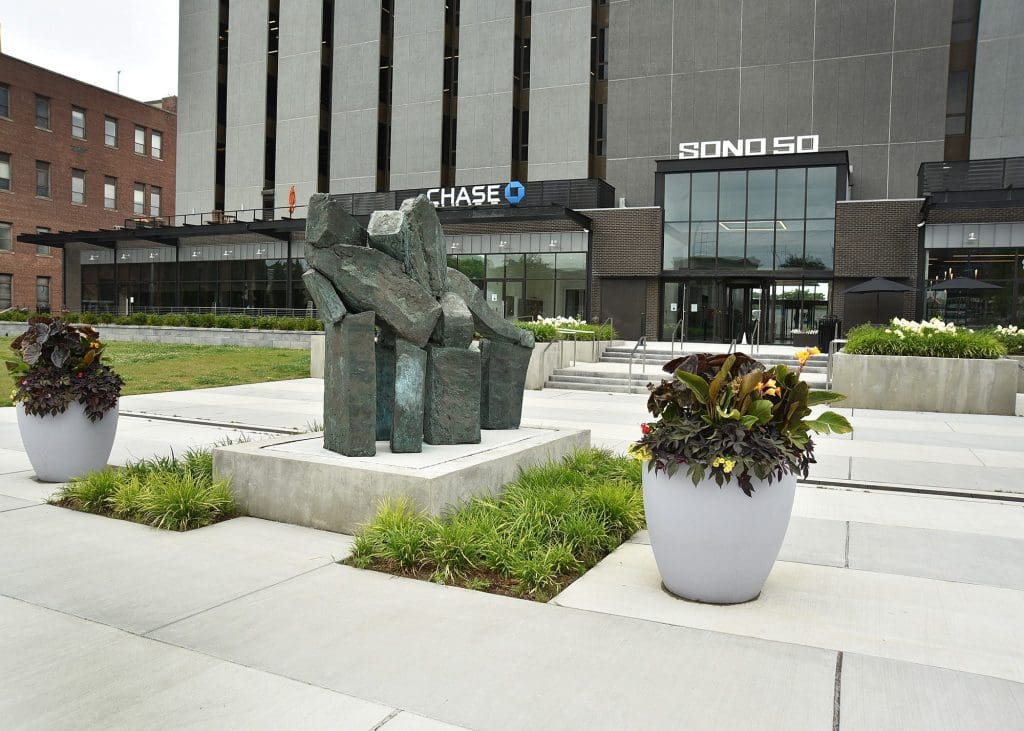 NORWALK, Conn. — Months, if not years, of anticipation fizzled into puzzled frustration and disappointment when Planning Commission Chairwoman Frances DiMeglio saw the just-about-done revamp of the City’s park at 50 Washington St.

DiMeglio recently sat across the street from the plaza fronting SoNo’s tallest building, comparing what she saw with the plans the Commission had reviewed when advancing the proposed expenditures in 2017 and 2018, she said.

“You all can prove me wrong. But I looked at things that were missing. They’re missing from what the plan that was before us,” she said at the Commission’s July 21 meeting. “…There were supposed to be tables that people could sit down. It’s supposed to be a whole different thing. So now we got rocks and grass, and not all the trees.”

DiMeglio went on to grill landscape architect Eric Rains, Senior Civil Engineer Vanessa Valadares and Redevelopment Agency Executive Director Brian Bidolli about the project, which first came before the Commission in early 2017 as a $500,000 request from Redevelopment.

Although the project is basically done, it’s also “in the pipe,” because the Connecticut Department of Transportation is involved and the project has been split into two segments, Valadares explained. 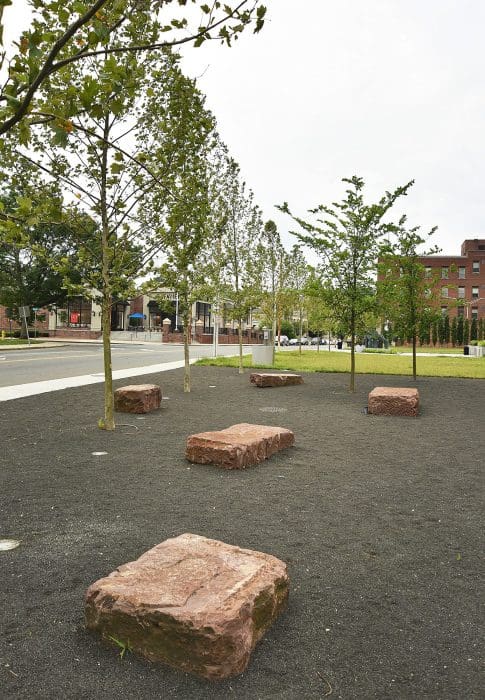 Construction may begin in the spring. There may even be a little water park across the street. And none of it will cost Norwalk a dime.

The park renovation was expected to cost $1.8 million and it came in at $1.2 million, said Bidolli, who took over Redevelopment in November and doesn’t have firsthand information about the project’s history.

But no one came to the Planning Commission when plans changed, an unhappy DiMeglio emphasized. She had been waiting for the plaza to “blossom into the beacon of SoNo,” as had been promised during “many excruciating hours” of Planning Commission discussions, conversations that “got ugly in some sessions,” she said.  And now, instead of benches, there are boulders.

“We’re imagining one thing, and then something else happens,” she said.

In early 2017, Derrick Shuhart of Eric Rains Landscape Architecture explained that the Redevelopment Agency’s ask for $500,000 would turn the city-owned plaza into a “focal point green space for downtown South Norwalk.”

It was emphasized that the plans were tentative.

The City approved $300,000 in that capital budget and another $300,000 the next year, City records show. In 2018, the project merged with Department of Public Works plans for Washington Street improvements and at that point, drawings showed two chess tables with two benches each, eight bike racks along the street edge, and precast seating and benches around the fountains “so there were there were never tables and chairs,” Rains said.

Those drawings never went to bid, he said. A few months later, concrete pavers were changed to crushed stone and those plans were put out for proposals, but the bids showed the project was overbudget, so it was shelved.

Then, in January 2019, the DPW project was separated from the park project and the chess tables were deleted because without the expected road widening, they’d be in the sidewalk, Rains said. Same thing for the bike racks.

Valderes, who also wasn’t involved with the original project, said DPW thought the prices would be lower if the projects were merged, but ConnDOT didn’t want to combine them. There was “a lot of back-and-forth” and this may be part of the reason why the Planning Commission wasn’t kept up to date as “they were very hopeful that they could have the both projects out as one.”

“I know that they tried to put this project out as one thing, a couple of ways, and then DOT didn’t allow it,” Valderes said. “Sometimes we are ready, but they take much longer on everything. It’s almost a year and we still haven’t got the green light to go build the crosswalks that now we’re hoping that we’ll get for the winter.”

All the promised trees have been planted, and as for the benches, the City saved $80,000 by using the boulders, which came from a bridge abutment elsewhere in Norwalk and were free, Rains said.

“They basically are the same height as the benches and I thought had a little more character. I had no problem accepting them when they were offered,” Rains said, pointing out that they match the stones in the adjacent railroad bridge abutment. 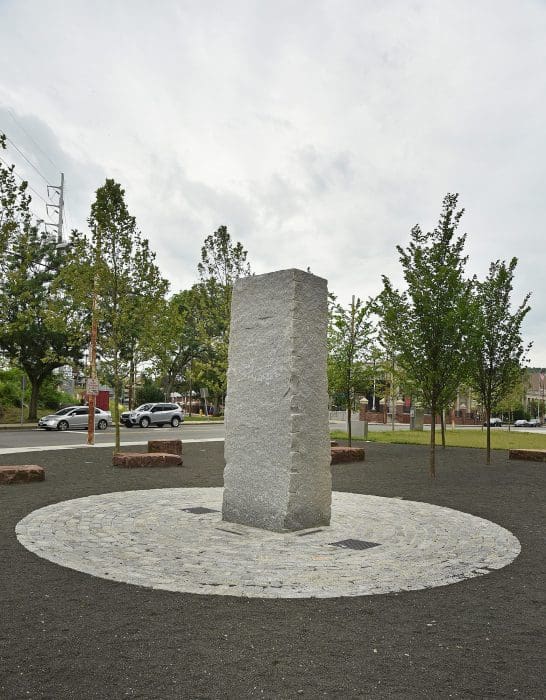 “I would call this park design world-class,” said Planning Commissioner Mike Mushak, a landscape architect. “…. These aren’t just rocks or boulders. These are basically the deconstructed parts of the bridge abutment that’s right there at the trestle in South Norwalk, the iconic trestle.”

“It may not look like what we envisioned when we were looking at the plans. But most of it’s there,” Mushak said. And while obviously the brick and the chess tables are missing, “when the pandemic is over…  we will see the genius of this park design where it will provide a venue for events whereas the old park did not.”

“The cost on this project, just, you know, really went out of control,” Planning Commissioner Mary Peniston said.

It’s under budget, Valderes replied. Bidolli added that pushing costs to a state grant brought it down from $1.8 million to $1.2 million, but DiMeglio said she thought it had originally been $750,000. Records show that in 2019, Redevelopment was granted a go-ahead to use money left over from a previous capital budget authorization, making up the difference from the $600,000 green-lighted in 2017 and 2018 and the project’s expected expense.

The DPW street expansion will be funded by a $1.7 million grant through the Western Connecticut Council of Governments (WestCOG), Valderes said during the meeting.

“I understand about the change on the design. That should have come back to you,” Valderes said, promising that the oversight wouldn’t happen again. “Unfortunately, I wasn’t the person at the time to make the decision.” 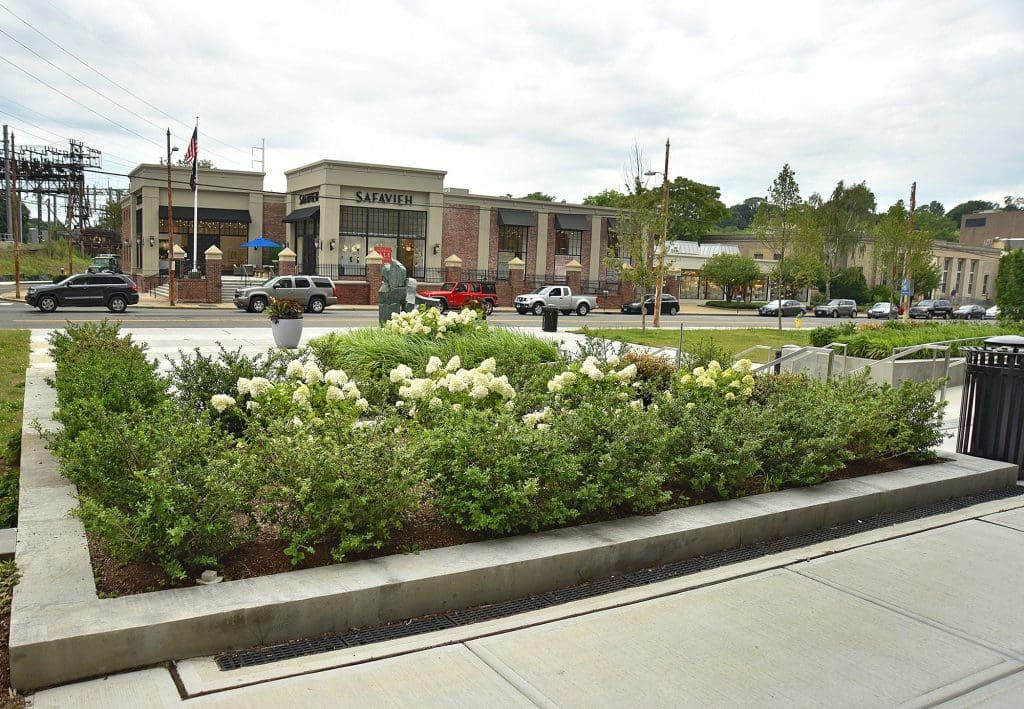 A view of the new park at 50 Washington St., property owned by the City. (Harold F. Cobin) 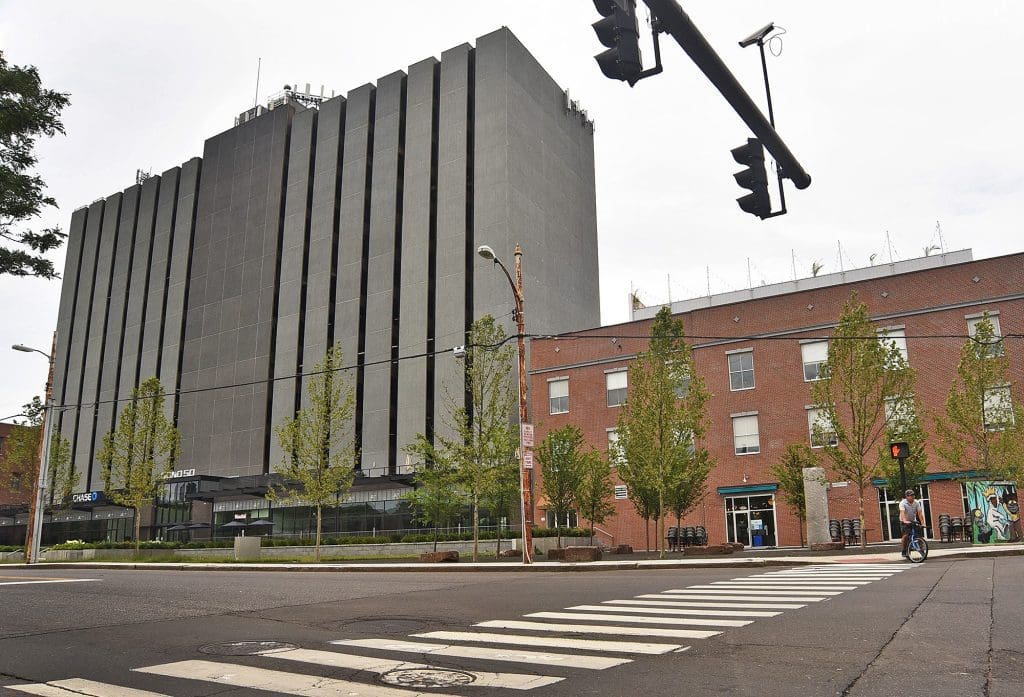 A view of the new park at 50 Washington St., property owned by the City. The trees are young and need time to grow, Planning Commissioner Mike Mushak said. (Harold F. Cobin)

Those “boulders” cannot be used as benches – they are too low to the ground, uneven, and sitting on a rock is uncomfortable. This is like the cement benches at the beach that get hot in the sun and are too hard to sit on – who makes these bad decisions?

Nancy could you obtain and post a copy of the actual itemized budget?

What % of the budget went to consultant & professional fees?

The results given the enormous budget are underwhelming.

Agencies were invented to eradicate slum and blight.

Is it relevant that Redevelopment Agency chairman Felix Serrano has his office in 50 Washington?

It’s still prettier than the eyesore that was there.

If DiMeglio wanted it to be a “focal point”, she needed to push for something to be done across the street and down the street. The building next to the plaza (far left in the last picture, just out of the frame) is an eyesore with broken windows and peeling tint-jobs on the ones that aren’t broken. The sidewalks on both sides of Washington, from the train tracks to MLK, are cracked, weedy, and unkempt, with the exception of this park’s new section of it. The back side of the C-town building is another eyesore; the full-window stickers are sun-bleached and enormous weeds are growing out of the side of the building. Right behind the camera (again, of this last pic) is an unusable little triangle of grass and gravel next to the train tracks.

It’s just not “focal” to anything. It’s the outside corner of a main stretch that makes an “L”.

“I would call this park design world-class,” , I can’t believe I just read that.

I am very disappointed the chess tables and bike racks were scrapped. They would draw people to the area. Parks should be destinations.

Classic bait and switch. While we are at it can someone explain how the Warsaw looking apartments on Water Street are supposed to look like the profiles voted on by our council?

The newly completed park looks terrific. A big improvement to what was replaced. While I have no idea what was originally planned or promised, taken away or cut from the budget, the final product that I saw was just fantastic. Hopefully it will be kept clean and maintained for all to enjoy. Job well done.

From afar: Installation of Reuben Nakian’s sculpture Juno made NY Times in March 1979.

How does a couple benches cost 80 thousand dollars? Were those gold plated? Where is the common sense.

Self congratulation on a job poorly done just adds another layers of insult in the face of Norwalk tax players.

What a joke…keep building condo’s when they can’t even fill the one’s they have now..highest place to live…mall is always empty.. wouldn’t waste my time there or money..this town all washed up.

Can someone paint the rusty street light please !

The lack of accountability by the Rilling Administration, its cheerleaders and the NRDA is pathetic … and they continue to get away with it. Hopefully voters wake up in November 2021

What happened to taste ?

The building at 50 Washington St.that was painted prison grey ?

The benches as mentioned by “Milly” are great if your a Munchkin.
I thought the architecture from the 1970s was 50 years ago.

I drew better architectural renderings when I was in High school.