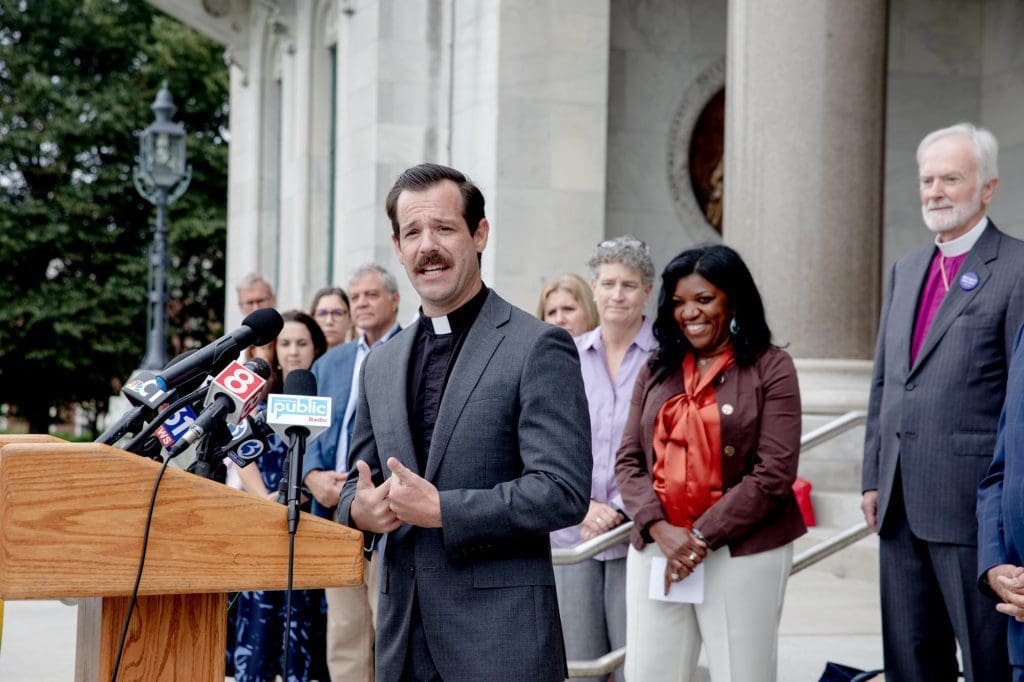 Americans who served in Afghanistan joined Gov. Ned Lamont and refugee resettlement officials Friday in a bipartisan effort to generate support for the 310 Afghans who soon will be settling in Connecticut.

One was the Democratic mayor of Hartford, another the Republican town chair of Fairfield. There was a minister who had been a Marine, and a Cambodian refugee who became an American soldier. All served in Afghanistan.

“This is not Republican and Democrat. This is about what it means to be American, that we stand by those who stand by us,” said Mayor Luke Bronin, a Navy veteran among the first elected officials to pledge support.

Alex Plitsas, one of the veterans who played a prominent role in the Digital Dunkirk, using intelligence and military contacts to help Afghans escape, said getting them out was only a start.

“This is phase two of a mission. Once people are out, they’re gonna need somewhere to go,” said Plitsas, who had been a soldier in Iraq and a civilian intelligence official in Afghanistan.

[A behind the scenes look at how Alex Plitsas, working from a home office in Fairfield, guided Afghans to safety.]

Veasna Roeun of Danbury, who was 3 when his family fled the Khmer Rouge and the killing fields of Cambodia after the U.S. left Vietnam, said it was jarring to see the chaos after Kabul fell to the Taliban.

Roeun was deployed to Afghanistan as a staff sergeant with the 102nd Infantry Regiment of the Connecticut National Guard. He was a Republican nominee for the General Assembly in 2018.

Each veteran spoke of a need to meet an obligation.

“I remember my time in the Helmand Province, making promises to the Afghan people who were fighting alongside us,” said the Rev. Thomas C. Burke, a former Marine infantryman.

Burke, who witnessed an explosion kill children in Afghanistan, is now a youth minister at Norfield Congregational Church in Weston.

The congregation is raising money for CIRI, the Connecticut Institute for Refugees and Immigrants, and one of two refugee resettlement groups in the state. The other is IRIS, Integrated Refugee & Immigrant Services.

“Many folks have been asking how they can help. We have two phenomenal organizations that are world class,” Plitsas said, referring to CIRI and IRIS.

Plitsas, the Republican town chair of Fairfield, said he was distressed to see disinformation on social media directed at sowing distrust and fear about the Afghan refugees.

“Everyone who’s on their way over has been processed at U.S. military facilities both abroad and in the United States,” he said. “They’re going through full background checks, both with the intelligence community and law enforcement.”

One of the men he helped get on a flight out of Kabul had been a translator for U.S. special forces. The man and his family are now in a Wisconsin military base, awaiting resettlement.

“These are people who are good,” Plitsas said. “They served alongside of us, they pose no threat, they have earned their place here, and we as Connecticut residents have a moral obligation to help take care of them.”

Lamont, who reached out to Plitsas after reading about his efforts, said Plitsas and Bronin were correct in asserting that the U.S. had a special obligation to the Afghans.

After the press conference on the Capitol steps in Hartford, the governor could be heard urging Plitsas to let him know if the state was falling short in the effort. Plitsas nodded.

Susan Schnitzer, the president of CIRI, said all the Afghans are vetted, though they come with a variety of legal statuses, including “humanitarian parolees” and refugees. Some of the first arrivals will be the recent evacuees.

“They’re not technically refugees,” she said.

Afghan refugees from the two decades of war already are established in Connecticut, providing the beginnings of a community for the new arrivals, following a well-established pattern, Bronin said.

Hartford welcomed hundreds of Bosnians in the 1990s and more recently the ethnic minority Karen from Myanmar.

“Let’s stand together. Let’s be what America is meant to be. Let’s welcome every single one of these Afghan families. Let’s do it together proudly for their benefit and for ours,” Bronin said.

“We’re setting up apartments, we’re looking for employment, helping kids get into schools, and we need your help doing all of that throughout all of your communities,” she said.

Andrew Smith, a retired Episcopal bishop who volunteers for IRIS, said, “It’s a huge task in front of us.”

Call me sceptical, but this administration has failed miserably on getting American citizens out, but miraculously, these 310 got out, vetted and screened.

Sorry, not buying it. We need real hard evidence.

Is Biden Administration paying to “relocate” the refugees or the tax payer? I don’t want to hear some special group is funding this as it’s always reverts to taxpayer funds.

What cities or towns are getting these refugees and do residents get to vote on accepting or rejecting them?

There’s too many illegals living off the dole as it is. They contribute nothing but sending money back to their country. We don’t see a penny back for all services they receive.

We need more hard evidence, more details before this comes to fruition.

Could we ever get our elected leaders in CT to be similarly interested in lending support to improving Bridgeport, our largest City and one of the nations most impoverished ? Or is Bridgeport just a “lost cause” ?

If it feels good, do it, and worry about the costs later. That is typical.
We can’t take care of the people in our poorest cities now. While the Federal incentives are short term and low cost compared to the TRILLIONS we wasted over twenty years in Afghanistan (thanks to Murphy and Blumenthal) we will be paying to bring these poor souls into the twenty-first century for a long time.
And the towns in Connecticut who WON’T be taking them in?!! The usual short list who howl about human rights the loudest but do not want their pretty little slices of heaven spoiled.
A note– California walks the walk, and is taking close to fifty-percent of the Afghans. That is what makes The Golden State a nation state!

Since this state seems so generous to resettle a group of “refugees”..

Why not ask Biden to allow Cubans into the United States?

You can pass on the Afghan “refugees” into Cuba on a one-for-one swap.

Here’s a report of Afghan “refugees” who are “vetted” at an army base Fort McCoy charged with a Federal Crime.

Afghan “refugees” attacked a woman soldier at Fort Bliss. Our military base.

These “refugees” were NOT ARRESTED OR CHARGED! 8 USC 1227 is the provision of our code that delineate when an alien becomes deportable. You are immediately deportable commiting this crime.

So you want these “refugees” who are clearly NOT “vetted” are coming to our towns or cities?

Are these politicians crazy? Did they drink the PINO Biden Kool-Aid?

No,let’s face hard facts. These people are NOT “vetted” and would be better off in a country that has the same culture. Not the State of Connecticut USA.