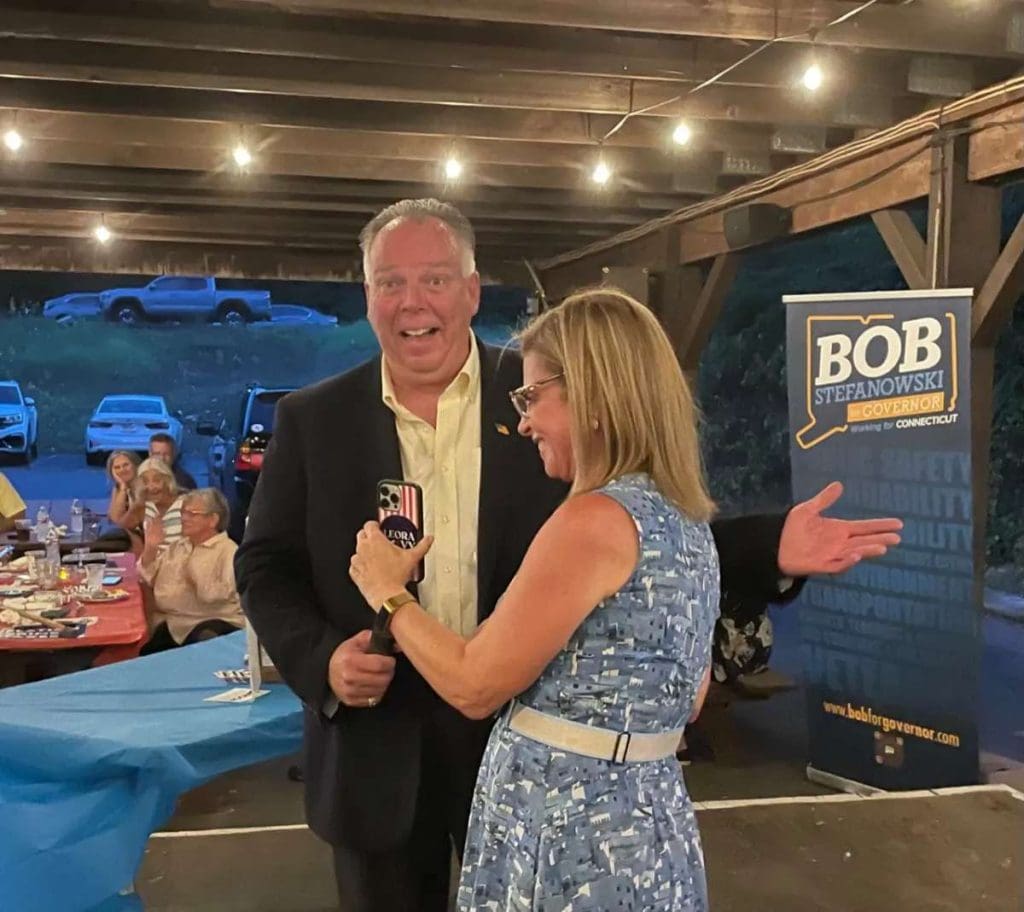 Wills Pike, the master of ceremonies, reacts as Leora Levy holds her phone to the microphone so Donald J. Trump can address the Montville Republican Town Committee. (Mark Pazniokas, CTMirror.org)

On the ballot Tuesday are Klarides, a socially moderate former state House Republican leader who did not vote for Trump’s reelection, and two Trump loyalists competing for the same conservative base, Levy and Peter Lumaj.

Regardless of whether Lumaj stays in the race, the former president has anointed Levy as the chosen conservative option to Klarides. By backing Levy, Trump has raised the stakes on what now could be a test of identity for Connecticut Republicans.

If they choose Levy, Republicans are opting for a 65-year-old, Ivy League-educated philanthropist from Greenwich who rapidly has transformed from an admirer of the establishment politics of the Bush family to a willing proxy of Trump.

“I am not a career politician. I am a career American,” Levy told Republicans in small-town Montville as they ate steak and corn off paper plates Thursday night. With a bit of Trump braggadocio, she suggested she was Trumpy before Trump. “I was ‘America first’ before anybody coined that phrase.”

Lumaj, an immigration and real estate lawyer seeking statewide office for the fourth time, has called Levy a fraud. But in Montville, he simply pleaded with Republicans to give him a look.

“You have a chance to nominate a true conservative on August 9, and that would be Peter Lumaj,” he said. “For the past 10 years that I’ve been involved in politics, I’ve never changed my position. I’m a God, family and country guy. I believe in the Constitution. I’m pro life. I believe in the Second Amendment because I believe that people that are disarmed will become subject to government abuses.”

Trump called Levy soon after the candidates spoke, creating a true moment of political theater witnessed by her stone-faced rivals. Grinning, Levy returned to the microphone and held up her phone so the 45th president of the United States could offer his greetings — and an endorsement of Levy.

A Levy ad attacking Klarides for, among other things, disloyalty to Trump was hastily revised Friday with a red banner that flashed every time Levy’s smiling visage was on screen. The banner carried white block letters: “ENDORSED BY TRUMP.”

Trump’s presidency was disastrous for Connecticut Republicans, and Democrats welcome his presence. Rising from the Barack Obama landslide of 2008, when Republicans lost all but 37 of the 151 seats in the Connecticut House, they won half the seats in the Senate and came within a half-dozen of a majority in the House in 2016.

The comeback in the House was led by Rep. Lawrence F. Cafero of Norwalk and then Klarides, his successor as minority leader. Both eschewed the culture-war rhetoric of the national GOP, focusing instead on Connecticut’s record of deficits and economic stagnation under Democratic majorities. 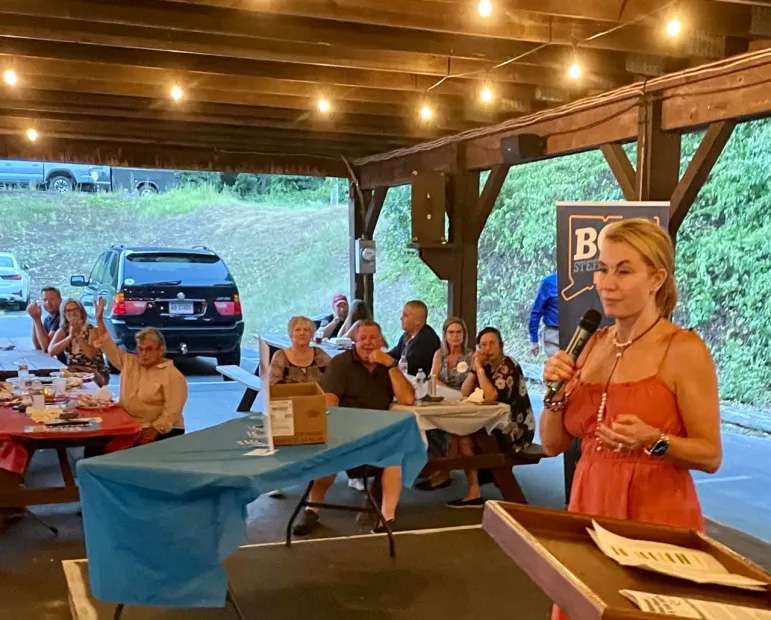 Themis Klarides told the Montville RTC, which has endorsed her, she would be “Dick Blumenthal’s worst nightmare.” (Mark Pazniokas, CTMirror.org)

But mobilizing around opposition to Trump in the 2018 midterm election, Democrats won solid majorities in the General Assembly, dashing Klarides’ ambition of becoming the first Republican woman to oversee the House as speaker. They also elected Democrat Ned Lamont as governor.

Aside from embracing Trump, Levy has gone from supporting abortion rights to declaring herself opposed to abortion in all cases except pregnancies that result from rape or endanger the life of the woman. Klarides has been a supporter of reproductive rights throughout her career.

Lamont’s campaign quickly noted that the Republican nominee for governor, Bob Stefanowski, who has labored to stay away from Trump and the issues of abortion and gun control, has contributed the maximum $5,800 to Levy’s campaign, siding with an abortion foe over Klarides.

For good measure, the Democrats noted the NRA also prefers Levy to Klarides, who voted for the comprehensive gun safety law passed in response to the Sandy Hook massacre of 26 educators and children. Levy says the law’s restriction on large-capacity magazines infringes on the rights of gun owners.

“It’s clear that Donald Trump and Bob Stefanowski want the same kind of person representing Connecticut in the U.S. Senate — someone willing to pursue anti-choice policies and serve at the pleasure of the NRA,” said Onotse Omoyeni, a Lamont campaign spokesman. “It begs the question — what kind of extremist policies would Stefanowski pursue if he were governor?”

Stefanowski said he gave the maximum to Levy and a lesser amount to Lumaj because they solicited him and Klarides did not.

The recipient of a perfunctory endorsement by Trump only after winning the primary for governor in 2018, Stefanowski quickly noted he has not sought Trump’s blessing this year.

Stefanowski was not present Thursday night in Montville, but his name was on a banner behind Levy as she delivered a Trump-style stump speech and later as she held up her phone, letting Trump speak.

Levy barely touched the steak served from a grill on an outdoor pit at the local Republican Town Committee fundraiser, but she cast herself as the proud purveyor of red-meat politics.

“Well, hello, Montville! I am so excited to be with the red meat crowd,” Levy said, following Klarides and preceding Lumaj. “Thank you for having me. And the meat was delicious!”

Levy, whose previous role in politics has been as rainmaker and Republican National Committee member, offered herself as a culture warrior.

“I am very concerned about the government’s efforts to intervene between parents and children and to take away parental rights over their own children,” Levy said. “And I will fight that with every ounce of my being, because teaching critical race theory and exposing young kids to inappropriate sexual and gender ideology is wrong. It is cultural Marxism.”

Levy warned of creeping socialism, an invasion at the border of undocumented immigrants unscreened for illness, and trafficking in fentanyl and “slaves to the cartels and human smugglers.” She called President Joe Biden the “No. 1 slave boss in the world right now.”

“So we must close the border,” Levy said. “We must let the Border Patrol do its job, use drones, electronic surveillance — and build that wall.”

It was an applause line.

Montville sits on the Thames River, upstream from the Naval Submarine Base New London and the Electric Boat shipyard, both in Groton. Support for military service, military spending and secure borders is second nature to local Republicans, some of whom are former submariners.

The town was a stepping off point for a pro-Trump rolling rally in 2020 led by Jeff Rogers, a retired state trooper and member of the Republican State Central Committee. He drove a pickup truck with a life-size cutout of the president.

Rogers is one of the conservatives not put off by Klarides’ break with Trump or the wedge issues dividing her from Levy. Rogers said he sees Klarides as the strongest Republican to oppose U.S. Sen. Richard Blumenthal, a liberal Democrat.

Whatever his differences with Klarides, they pale next to his troubles with Blumenthal. And he said he wants a winner.

He is not alone. Montville’s RTC has endorsed Klarides, a state legislator for 22 years before not seeking reelection in 2020. With nearly 57% of the vote, she was endorsed at the Republican State Convention in May. 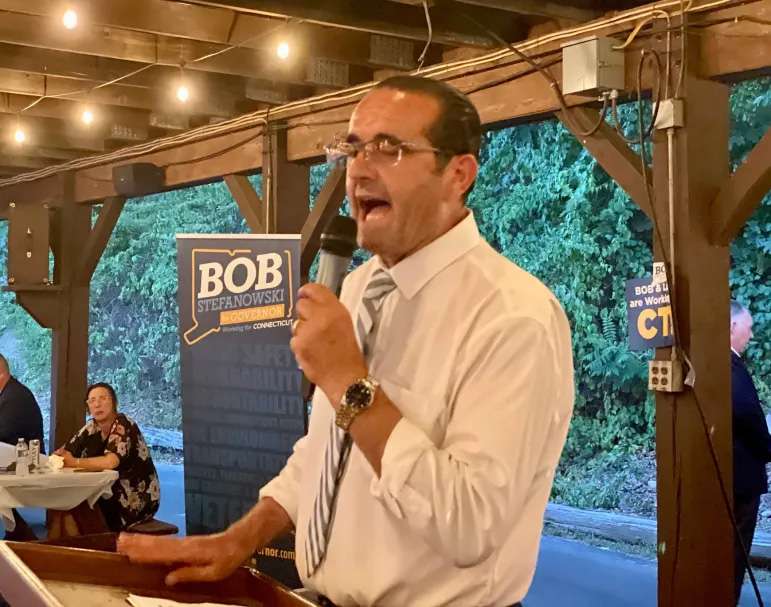 Peter Lumaj says he is the only consistent conservative in the race, but the Trump endorsement of Levy undercuts him. (Mark Pazniokas, CTMirror.org)

Electability and her experience as a leader of the opposition to two Democratic governors, Dannel P. Malloy and Lamont, are her selling points.

“I am a loudmouth Greek girl, and I don’t take any crap from anybody,” she told the friendly crowd in Montville. ”I don’t stand down to anybody. And I’m going to be Dick Blumenthal’s worst nightmare, because I believe in this state. And I believe in this country.”

Klarides welcomed Trump to a rally in Bridgeport in 2016, and she was a delegate to the Republican National Convention, committed like the rest of the delegation to the winner of the state’s primary, Trump. But she cast a protest vote for president in 2020: Her mentor, Cafero.

On Saturday, she knocked on doors in Wallingford with Rep. Craig Fishbein, one of the conservatives in the House who have backed Klarides as the GOP’s best option.

She campaigned with her successor, House Minority Leader Vincent J. Candelora, in North Branford, with Rep. Christie Carpino in Cromwell and with Sen. Heather Somers in Stonington.

But most Republicans will get their final peek at the candidate through ads on television, including a Levy spot that says the former House leader and choice of the state convention “isn’t one of us.”

An ad from a super PAC supporting Klarides tries to strip Levy of any populist credibility, calling her a Wall Street commodities trader who “got rich off high inflation and used her wealth to fund Dick Blumenthal.”Levy’s brief career trading commodities ended in her 20s, before she married Steven Levy, a real-estate broker and investor and the grandson of a founder of the United Jewish Appeal of Greater New York and the Albert Einstein College of Medicine. Her only contribution to Blumenthal was $100, jointly made in 1998 to his reelection for attorney general. Levy said the check came from her husband.

The basis for the assertion was Klarides’ answer to a question posed during a WFSB interview: Should Trump be indicted if he was found to have incited the uprising?

Klarides’ reply was not in the ad. But she told WFSB, “I think anyone that is responsible for inciting a riot, regardless of who they are, should face the consequences.”