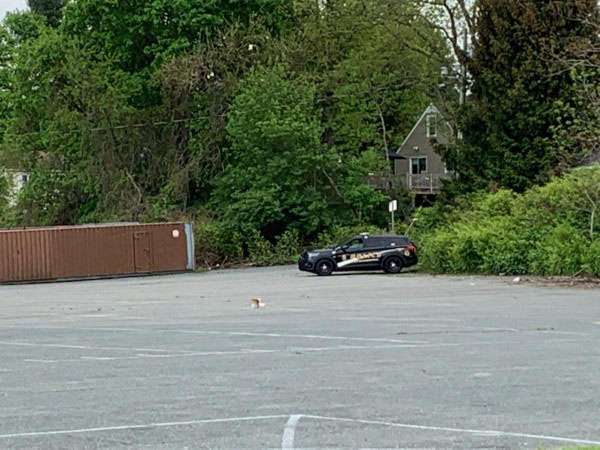 As you can see, it’s a Norwalk Police SUV. A different version of the photo is below.

“It appears the officers is parked and could be doing a number of things,” Norwalk Police Chief Thomas Kulhawik said in an email. “Among the ones that immediately come to mind is they {were} writing a report on vehicle MDT {mobile data terminal}. Or maybe eating dinner given the time you report.”

He later wrote, “I am not investigating a parked cruiser at 6pm.  We learned that it was the post car that was parked there in between calls.”

John Levin is a Chapman Hyperlocal Media Inc. Board member.

Maybe it’s a good thing the cop wasn’t doing something else, like arresting the photographer for stalking.

Yeah, first thought given the time – probably eating dinner. Second thought how creepy is it to take this picture?

Can we submit videos and photos of police hiding in their cars, playing on their phones, watching the workers in the pit or up in the bucket when they are suppose to be directing traffic and aware of what is going on in their surroundings?

I have plenty of these….

Would it be to hard to roll up on a police car or them working extra duty and offer them a water or something to show your appreciation?

A simple kind jester goes a long way. Even just a wave hello might get you a smile in return.

Wow, so glad you have the time to watch a police officer on their lunch break! You cracked the case. THINK about it; the vehicle is their office. Many people take lunch breaks and other breaks in their offices because they don’t have enough time to go anywhere. Should they put an “Off Duty/On Duty” sign on the vehicle like A taxicab? If the officer, was on break and a call for service came in; the break would most certainly be over. Doubtful the response to dispatch would be, “sorry, on my break.”
Does that make any sense? Why not THINK about it before getting so reactionary and following the media narrative.
Choose to be morally outraged by people collecting unemployment and not accepting job offers on our tax dollars.

One of the MANY reasons why officers need to get away like this is that their cruisers are essentially their offices. Some people in office atmospheres have been known to listen to music on headphones and still get their work done. I happen to not be that type, I need silence, so if I were an officer I’d choose that lot too, as long as the marching band weren’t practicing… We have become such a judgmental society, it is sad. And a lot of it seems to be knee jerk – no thought involved. Judge and done. Really? Because someone snapped a photo and commented on it. Jeez – no evaluation at all, just agreement on the sentence? Yikes

I agree. The officer probably was enjoying dinner or waiting for his next call. What i dont understand is how long do you wait to fire the two cops making whoopie at the hotel and drinking on the job? Are we still reviewing the case? Cmon Chief!

Why assume they are doing something wrong?

The blue wall of silence goes up immediately. Or is it
The Eleventh Commandment?
What is wrong with cooping in a very visible location to show the public we are getting what we pay for?

When an NoN Board Member posts a picture, like the one above for malign purposes, or posts on an article; does the picture or the post go through a review process? NoN Board Members should also identify themselves when posting.

E-Gad. Let’s cut the police some slack when it comes to sitting in a parked police vehicle for all the reasons above. What’s not fair is the arithmetic of how an officer can make $275,000 a year with a base pay of $90,000. Would love to see that investigated.

NoN Board – Would appreciate an answer to my question.
Thank you

Once again the left is looking for something to outrage about when its… just some officer taking notes or eating dinner.

@Fran – As a hyperlocal news site focused on government issues, we offer a platform for a wide range of views and opinions. We welcome submissions from our readers, and we identify board members when they contribute. In this case, we offered an explanation from the Chief of Police, providing a balanced view of the photo and a bit of insight into police procedures.

Really?? Can’t even see this officer. Maybe officers are afraid to proactively patrol the streets anymore for fear of being called a racist, fired, lose their pension, or their family’s home, etc. You can thank politicians like your lovely former cop supporter Bob Duff for helping to pass Police Accountability bill in CT. I believe in police department reform, getting rid of the bad cops, getting better training for dealing with the mentally ill, etc. but watch what you wish for. Police can no longer police. Let the social workers and therapists come to your domestic altercations and see what happens.