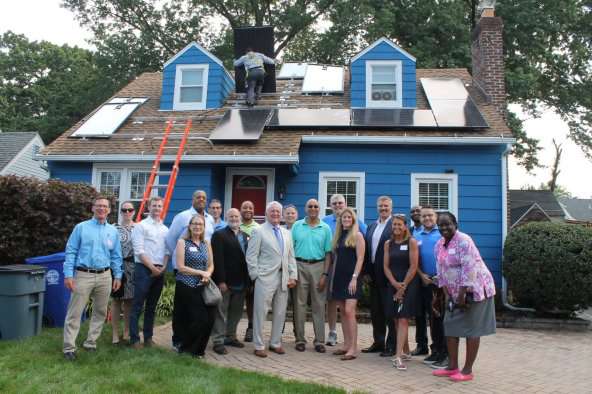 NORWALK, Conn. — The Connecticut Green Bank, PosiGen, and the City of Norwalk recently celebrated the installation of 12 solar panels on the roof of the Munroe residence in Norwalk as part of the Solar for All initiative, a news release said.

The Munroes are among 22 Norwalk families who responded to the SFA initiative since its campaign kicked off in April, Kasara Newton of Gaffney Bennett Public Relations said. That’s in addition to 33 Norwalk families whose systems have already been activated and several others going through the activation phase outside of the campaign.

The goal is to bring “solar and energy efficiency to underserved communities across the state, and enjoy an average estimated first year net savings of $700 on their electricity bills,” the news release said.

More than 4,100 Connecticut families have benefitted, she said. More than two-thirds of the Norwalk customers “are low- or moderate-income families and they are located all over the city.”

You can still apply: the campaign has been extended to Oct. 31. For more information, go here.

South Norwalk Electric will not let you get Solar Panels.

The Tesla tiles are just a tad more expensive and you own them afterwards, not the state sanctioned banksters. Who in their right mind would put a potential lien on their house, not to mention holes in their roof and an ugly assembly on top of it?

To our Tree Huggers out there I ask: Do you want solar or do you want trees? You can’t have both. I’d like to hear from you…

Solar does not pay in this part of the country just yet. There are a few factors 1- Panels are not efficient enough 2 – Not enough hours of Sun to generate enough power 3 – Electricity is not expensive enough yet to counter 1&2. What is frustrating to consumers is Solar companies all rate their system output differently. They all use similar components yet they rate the output differently compared to each other. The DOE needs to intervene and provide guidelines on system output ratings so customers can make informed decisions. Otherwise it will continue to be a bait and switch situation you have to live with for 15 years.

Where is Bob Duff? He must not have known a picture would be taken.

What good is solar on roof when street is flooded damaging our properties? Guess no photo op then.
After all what politician wants to stand in 3 feet of water in the pouring rain at 11 PM.