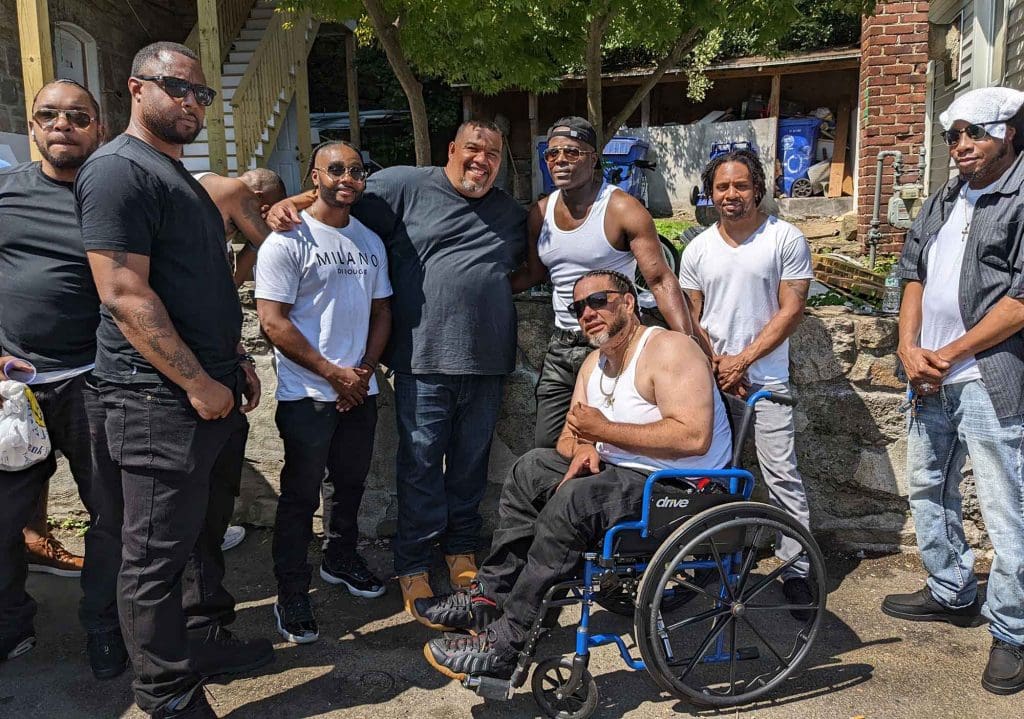 James Williams, standing third from right, and his lifelong friends.

NORWALK, Conn. — James Williams and his friends resorted to playing “garbage ball” when they were kids, after the City took out the basketball courts in their South Norwalk neighborhood, they said.

Williams and his lifelong buddies were gathered recently on Oak Street, after a friend’s funeral, when he spotted a reporter with a camera. He requested a photograph, offering a simple explanation: “We’re Bouton Street.”

City officials had just announced a plan to use federal American Rescue Plan Act funds to upgrade a Norwalk school playground and three South Norwalk parks, including the one on Bouton Street. NancyOnNorwalk was there to get a photo of the existing conditions.

Williams said they played basketball in the park when they were kids, but the nets on the hoops got so bad they were unusable and the City didn’t replace the court. They went to Brookside Elementary School to play but that basketball court was removed.

“They took out all the courts in the neighborhood,” Williams said.

“Then we started playing football,” one of the men said. Another man said they played “garbage ball.”

Williams explained they used two dumpsters to define the boundaries of a full basketball court.

The men were surprised and pleased to hear the playground would be improved. They explained that the picnic then underway in the park was in honor of their late friend.

Rasha Boyd, a member of the group, said last week that they might “again” organize a book bag drive, this time in his memory.

Beautiful and poignant piece…I hope the city restores and builds up more areas in underserved communities here so that no kid has to be left to make their own garbage ball court. With the taxes we pay in this town not a single kid from amy part of town should go without what the wealthiest neighborhoods get. We see this inequality in street paving and utilities upgrades, it’s disgusting.

From bouton St lived at #10 lived there over 40years back in the 70went around with a petition to fix the park we kept it clean growing up the guy worked that worked for the city. had the basketball rims taken I live n NCi go home I always sit in front for a few minutes alot my boy broke my finger on the swing lol.memories

Kids need places to play — Young adults need places to work and be mentored.
Meanwhile the city is spending $ 700,000.00 putting up trees. Go Figure.
Just to make some climate alarmists sleep at night. They obviously did not grow up in South Norwalk.
Thank you for the article — We need to support kids who need supporting.