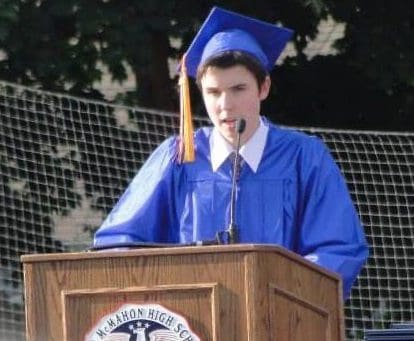 NORWALK, Conn. — This photo was submitted Tuesday by Bartek Szymanski. You can get an up to date look at Szymanski on Wednesday’s episode of Chicago PD.

“Known for independent films such as ‘Creedmoria’ and ‘The Farthest Apple From the Tree’ which went on to be nominated at Cannes Film Festival in 2017, this will be Bartek’s first role on network television,” a press release said.

“Bartek graduated Brien McMahon High School in 2014 serving as the Senior Class President. He went on to study BFA Acting for Film, Television, Voice-overs, and Commercials at Pace University in New York City.

“Bartek was subsequently elected as Executive President of the Student Government Association, the highest office a student could hold at Pace University. He made historic strides such as adding two new Student Senate seats for the Performing Arts School, a level of representation unimaginable only a couple years prior. Bartek is also credited for adding theater spaces for students and creating round tables between business leaders and student creators.

“Bartek is proud to come from Norwalk and hopes to open more doors for students in the arts, especially within his childhood community.”