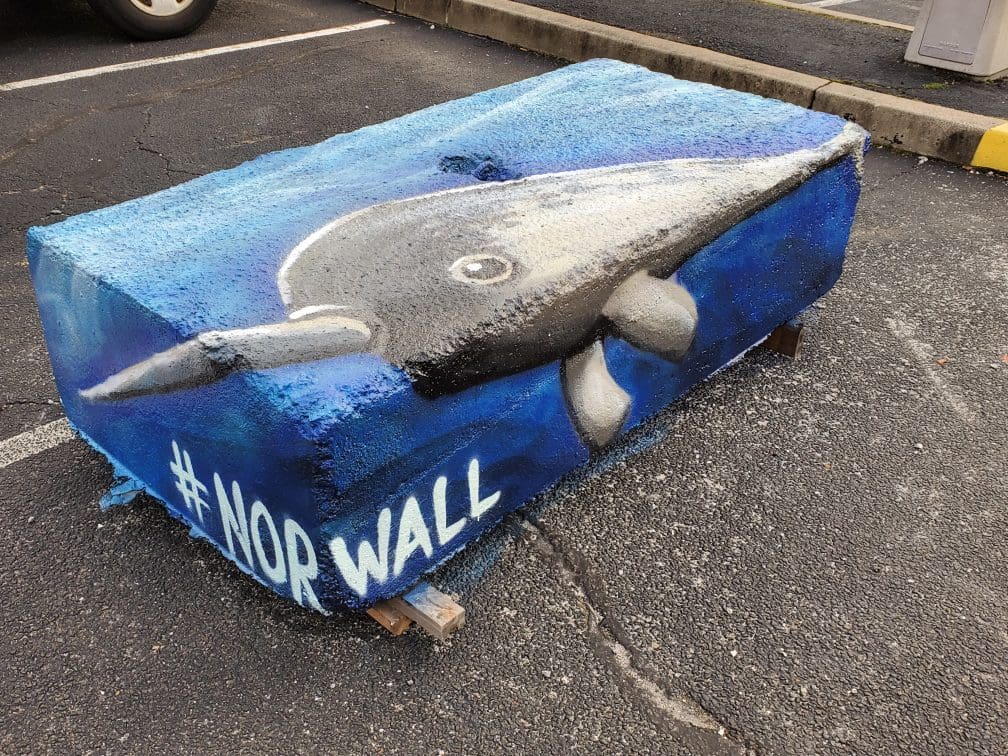 You guessed it, he said “#winning,” although Norwalk Corporation Counsel Mario Coppola later informed NancyOnNorwalk that the City is going ahead with a new lawsuit against Milligan.

Milligan recently had concrete blocks placed along the Isaacs Street entrance to the former municipal parking lot that he bought in May 2018. The barricade prevents drivers from using the lot to get to Leonard Street. This is a problem since Isaacs Street has been a one-way road since 2015.

The City promptly disallowed parking along the “POKO’s” eastern edge to make room for two way travel. Milligan was told to remove the blocks by Nov. 16 or face a new lawsuit.

Now Milligan has playfully painted his blocks. Some have colorful geometric designs, and a tiger is in the works.

The above block is named “Nora,” he said. “Norwalk-Wall Street’s Norwhal or Norwall…”

Asked about the lawsuit, he wrote, “No new lawsuit yet. Instead they should have a conversation and just ask nicely for what they want. I will be unveiling a new Conceptual Master Site Plan CMSP soon. It will be the best plan for the neighborhood taking into account all variables, lawsuits and personalities.”

Coppola wrote, “Yes, we are in the process of finalizing a lawsuit that will served on Mr. Milligan.”

When life gives you blockades…

When the lot was converted from municipal to private, shouldn’t the city have addressed the street concern then and convert it to two-way? Who overlooked that? If it’s private property, the owner can do with as he sees fit, I don’t see the problem.

This is really getting ridiculous.

Would you please open a line of communication with Mr. Milligan. This battle of egos is costing the Norwalk Business Owners down here a lot of money that we can ill afford to lose. And Norwalk can’t afford to lose more businesses.

Every business I speak with around here has been harmed by this unwillingness to talk.

We don’t care who is right – you are both (City and Milligan) wrong!

The last thing we need is more business damaging issues created by local government (remember it takes two to tango).

Milligan has clearly voices his wiliness to talk but the City seems unwilling.

Can we have some resolution?

Taxpayers would appreciate an attempt at diplomacy before wasting additional money on frivolous vexatious lawsuits.

The legal dollars wasted fighting me so far is approximately equivalent to the annual tax bill for 100 Norwalk houses… sickening!

For over a year I told the City and Agency that the unfettered access would come to an end unless we came to some sort of agreement. They are not even willing to have the very first conversation about it.

Local businesses I am sorry that you are the collateral damage of the cities unwillingness to compromise or engage.

Please some one come to their senses.I am a Leonard Street resident and the parking is really bad.The business in area employee is parking on the street and we live and have a problem parking.Now we have all these no parking signs put up .And to have to down load and just to pay for parking is unbelievable. Everyone don’t know how to do that especially the seniors.Please stop this madness Mr.Milligan and Mr. Mayor just do something for our belove Wall Street area.