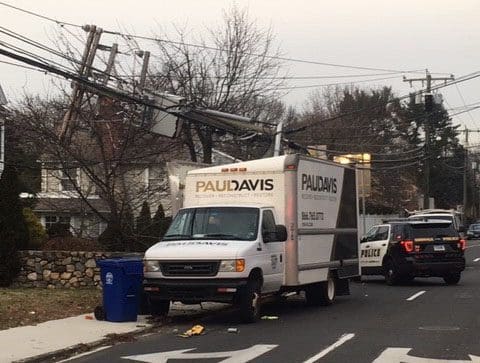 NORWALK, Conn. – A small box truck hit an East Avenue telephone pole Thursday afternoon, just north of Route 1, according to the Norwalk Fire Department. The impact split the pole in half and an adjacent pole also split due to the tension in the wires; a transformer subsequently blew and wires were smoking.

The two occupants of the truck appeared to be uninjured, according to the fire department. A segment of East Avenue was closed during the cleanup and residents on that side of the street were advised to stay in their homes.

Power was knocked out because of this for around one thousand residences and businesses, including Stew Leonard’s. Eversource did a great job getting the power back up fairly quickly.

Eversource should consider replacing poles with installing below ground power lines similar to other towns and cities to avoid such incidents…would be much more visibly appealing, too.