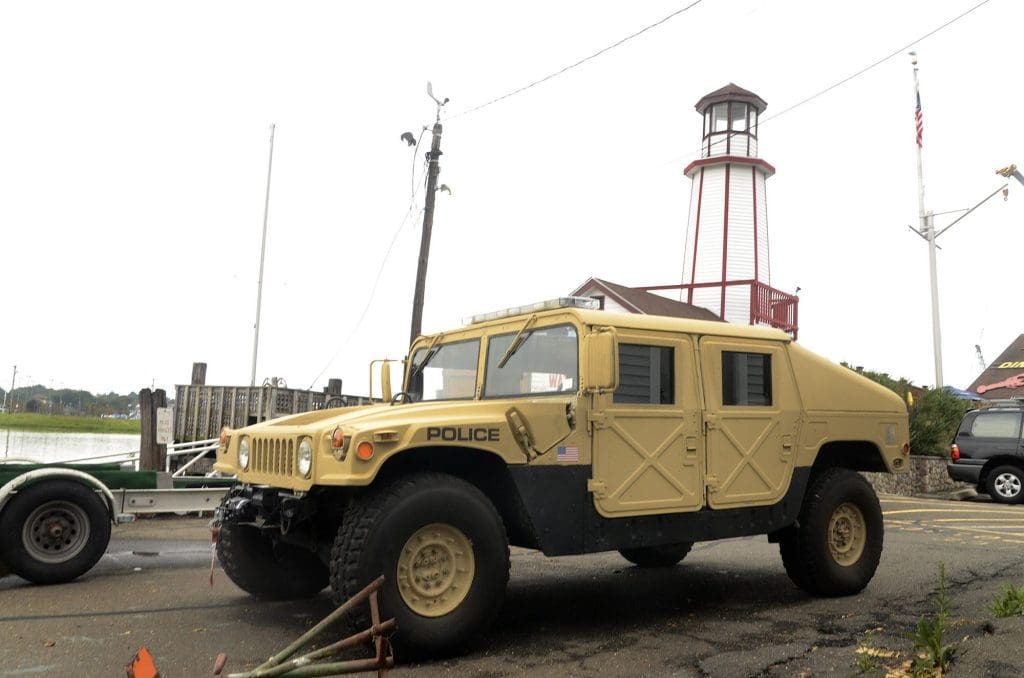 NORWALK, Conn. — A Humvee parked next to the Norwalk River, behind the marine police headquarters.

“We have had it about a year or so.  It did not cost anything,” Norwalk Police Chief Thomas Kulhawik said in an email. “It is stored and maintained by the Marine Unit. It would be used for high water rescue or other storm situations where traditional vehicles would have difficulty. We also will use it during open houses.”

1. “It did not cost anything.” Not true. It may have not cost the Norwalk Police Department anything, but it DID cost those of us paying taxes to the federal government. To paraphrase an old saying “There’s no such thing as a free Humvee.”

2. “It is stored and maintained by the Marine Unit.” Ok, storage might not cost anything. But maintenance? That surely costs something. Yes, we pay the Marine Unit whether they maintain the Humvee or not, but if they weren’t maintaining the Humvee, they might be doing something (whether on land or on the high seas) that might be more useful to Norwalk’s taxpayers than maintaining military equipment that they don’t need.

3. “It would be used for high water rescue or other storm situations where traditional vehicles would have difficulty.” It “would be”? That says to me that it has never been used for that purpose. And it belongs to the Marine Unit, right? Perhaps the Marine unit might have enough contacts with the local marinas to actually borrow a boat for a high water rescue? Or borrow some other high-clearance vehicle? Do we really need to own and maintain a military vehicle painted for desert combat for rescues that we were always able to effectuate before?

4. “We also will use it during open houses.” So, we use it at open houses to show people (and especially impressionable kids) how cool it is that the Police have military equipment that they don’t really have a use for? I don’t think that’s really the message we want to send. Our police officers are their best selves when they are amongst us as members of the community, enforcing the laws by their presence or their actions. They don’t need to be showing off military equipment in a way that makes the public think they are something that they are not, nor something that they should not be.

There’s surely some hedge-funder in Fairfield County who would love to pay top dollar for a military Humvee.

@Paul, instead of focusing on a $10k used car, you might want to concern yourself with the millions running out of city hall on stupid things we don’t need like $75k crosswalks, $150k exams with no controls, $900k in accounting fraud, untold $ millions on lawsuits borne by incompetence, etc…