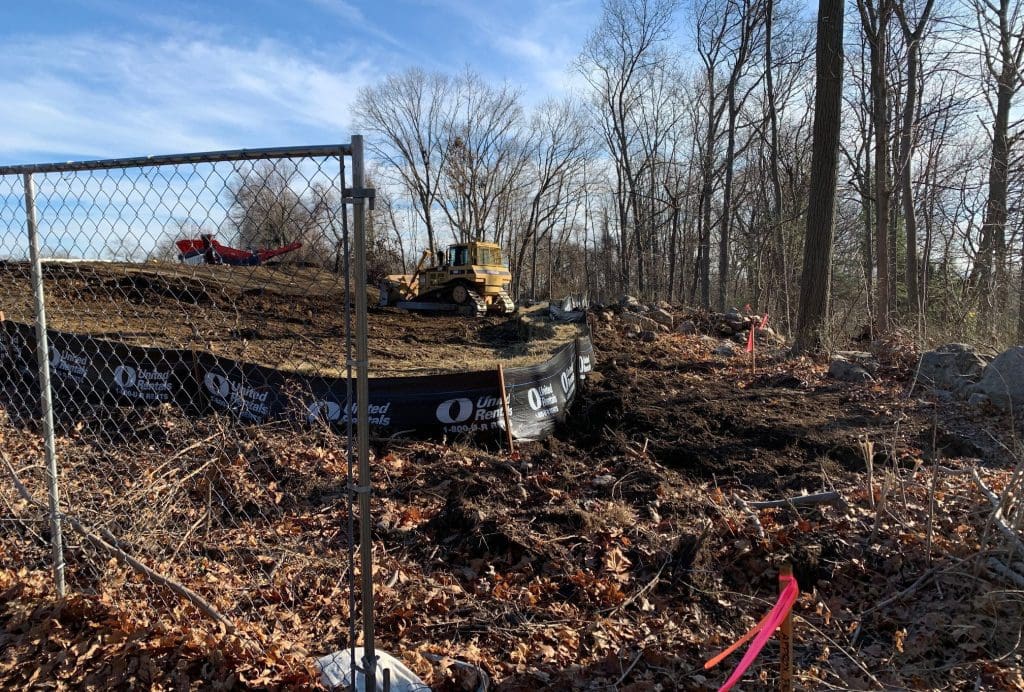 Correction, 9:20 p.m.: Construction is being done by TD and Sons, Inc.; information added.

The contractor was ordered to stop work Wednesday and install erosion controls, Planning and Zoning Director Steven Kleppin said. This after neighbors complained Monday: according to Roberta Andreasi, a Sunrise Hill condos resident, muddy water was “cascading down the hill and flooding the back yards and running down Aiken Street into the ponds.”

“I think it is about time that measures are being taken that will address the flooding of the yards on the perimeter of the school and the amount of soil running down the steps and walkways,” Andreasi wrote Thursday.

Kleppin said P&Z expected silt fences and hay bales to be installed, and would check before another storm comes in Friday night or Saturday.

City records show the contractor is TD and Sons, Inc.

Peter Di Salvo, another Sunrise Hill condo resident, alerted NancyOnNorwalk to the flooding Monday. On Thursday, he said he had no comment about the work but would stick to his point that “my neighborhood has been destroyed due to negligent oversight and blind approval of three projects by city zoning and planning.” 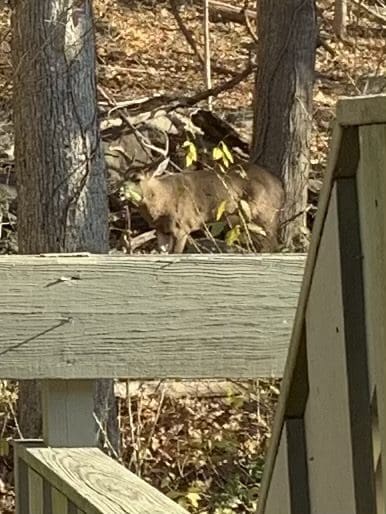 Di Salvo said trees have been removed due to two housing complexes and now the soccer field. Norwalk Communications Manager Josh Morgan said 16 trees had been cut down for the soccer field’s parking lot and 16 new trees will be planted.

A city document shows that 18,000 square feet of woods was planned to be removed, and 15 Green Giant trees planted along the property line.

Deer are walking through the Sunrise Hills condos parking lot because they have nowhere else to go, Di Salvo said.

“For this project I stated earlier that the removal of trees and replacement of grass with artificial turf in an area that is already victim of water issues is complete oversight,” DiSalvo wrote Thursday. “Keep in mind there are two other projects on this street that has definitely affected the absorption of water.  Looks pretty clear that point has been proven, so you can add incompetence to my list of adjectives for that department. I’m done caring anymore as they say there’s no fighting City Hall.”

Werent trees cut down for the Sunrise Hill Condos to be built? Asking for a friend.

If there’s a way to destroy its nature, Norwalk will find it.

Correct, in 1976, ’77, ’78 trees were cut down for the Sunrise Complex, Winnippauk complex and Rolling Ridge. These complexes were spread out and woondlands and fields in between. Kind of like filling a coffee cup half fill – you can still walk around the room without spilling. Those complexes know the forty years of balance between water and nature – and the city chose to disregard those remarks. Now, there are no fields or woodlands nor were any neighbors effectively included in the decisions to build on the remaining areas of this neighborhood. As I write this on the morning of December 5 I am watching a streams of silt and mud flow through the back yards of at least three building here at Sunrise. The measures mentioned above to curb the flooding have done nothing, one neighbor said it made it worse. The muddy water has bypassed the traditional drainage stream and is very near my foundation. My neighbors above have it far worse the water and mud is against their buildings. Happy Saturday!

While the city may have told residents that the complex at soccer complex construction at West Rocks Middle School will be for the use for soccer games, the scope of the work says otherwise. The size of the project and large parking area seem to indicate that it could be used as a multi-use athletic complex for sports like football, soccer, baseball and field hockey during the day and night. Where do residents think these sports will be played while the new Norwalk High School is being built? Where do residents think school marching bands could hold practices and competitions?
Pollution from nighttime lighting will affect immediate neighbors, and noise pollution may be heard for miles. Because residents want their peace and quiet after a long day’s work, what time will the lights go off, the noise stop, and the complex closed for the night? How many days and nights a week will it be open? Because it’s a large piece of property, what plans does the city have for its use as a multi-use athletic complex? It seems storm water runoff has been an ongoing problem at Sunrise Hill condos. How does the city and its contractor plan to permanently alleviate the problem without harming other neighbors?
If the city sent certified mail notifications to abutting property owners about the complex, a notification may have only been sent to the Sunrise Hill condo board and not to individual unit owners. The city should have evidence of mailings on file per city regulations Section 118-1450, Special Permit Application Instructions, Notification of Neighbors.
The mayor and common council need to be transparent about the complex and its use. After all, municipal elections for mayor and others are in 2021.