The John Kydes signs in East Norwalk easily outnumber the ones for opponents Jenn McMurrer and Tyler Fairbairn. Only a few Kydes signs are accompanied by one for his running mate, Jennifer McAllister.

The 2021 Election is Nov. 2. A District C Democratic primary is scheduled for Tuesday, Sept. 14.

NORWALK, Conn. — It will be an unusual primary Tuesday in Norwalk, as it’s been years since District C voters were asked to decide who’d be on November’s ballot as a Democratic Common Council candidate. If ever.

That’s the only race being decided; recent primary votes have either been city-wide races or in other districts, so it’s difficult for political operatives to formulate strategy and predict what will happen, as ordinarily they’d use numbers from a previous primary.

While it might seem obvious that incumbent John Kydes has a leg up given his established ability to get votes and line up a power base, recent facts indicate that much of his support is from the Republican side of the aisle. Those people can’t cast votes Tuesday; his unaffiliated folks might, if they’ve changed their status in time.

Kydes and Oak Hills Park Authority member Jennifer McAllister won the Democratic Town Committee endorsement in July; newcomers Tyler Fairbairn and Jenn McMurrer say they felt their neighbors and fellow parents were not being heard and worked to secure enough signatures to force a primary.

McMurrer and Fairbairn criticize Kydes for leading a $1 million cut to the planned budget this year, money that came out of the schools’ budget.

“The facts can’t be ignored! The Board of Education has received the highest budget increases in the state nearly every year John Kydes has been on the Council,” the Kydes campaign said in a Facebook post.

In recent years, Norwalk primaries have seemed a fruitless endeavor, as the challengers haven’t succeeded in unseating the candidates who won their party’s endorsement. But it does happen: in 2014, Fred Wilms took the Republican District 142 State Representative endorsement from Emily Wilson. Also in that year, Karen Doyle Lyons held off a challenge from John Federici, who had been recruited by Republican leadership seeking to replace her as registrar of voters and been endorsed by the Republican Town Committee vote.

Norwalk Democratic Registrar Stuart Wells hesitated to estimate the cost of Tuesday’s primary, saying the bills haven’t come in yet. He wrote:

“I don’t want to make ‘guesses’ from prior years’ information because the cost of things like ballots are greater, per ballot, in the small quantities we order for a primary like this — basically, there are still design charges, but no volume discounts. The same is true for set up of the handicap ballot marking system, transportation of the equipment to the polling places, etc. We will use up some supplies – things like PPE for the poll workers, office type supplies at the polls, and so forth, but these will come from existing inventory and it would be difficult to give an accurate cost number.

“That being said, election workers (poll workers, absentee ballot counters, office staff over time, likely recount officials) should total about $4,000 as they generally work the same hours as in a November election — the polls are open 6:00 a.m. to 8:00 p.m. in both cases. (A recount is likely as this is triggered by a difference in vote totals of 1/2 of 1% OR a difference of 20 votes or less and often happens in typically low turnout primary like this.)

Interest might be light. As of mid-Friday afternoon, the number of people requesting absentee ballots hadn’t hit double digits yet, Wells said.

Kydes’ campaign Facebook page has 310 likes at 320 follows. McMurrer’s page has 126 likes and 148 followers. Fairbairn’s has 97 likes. NoN could find no page for McAllister. 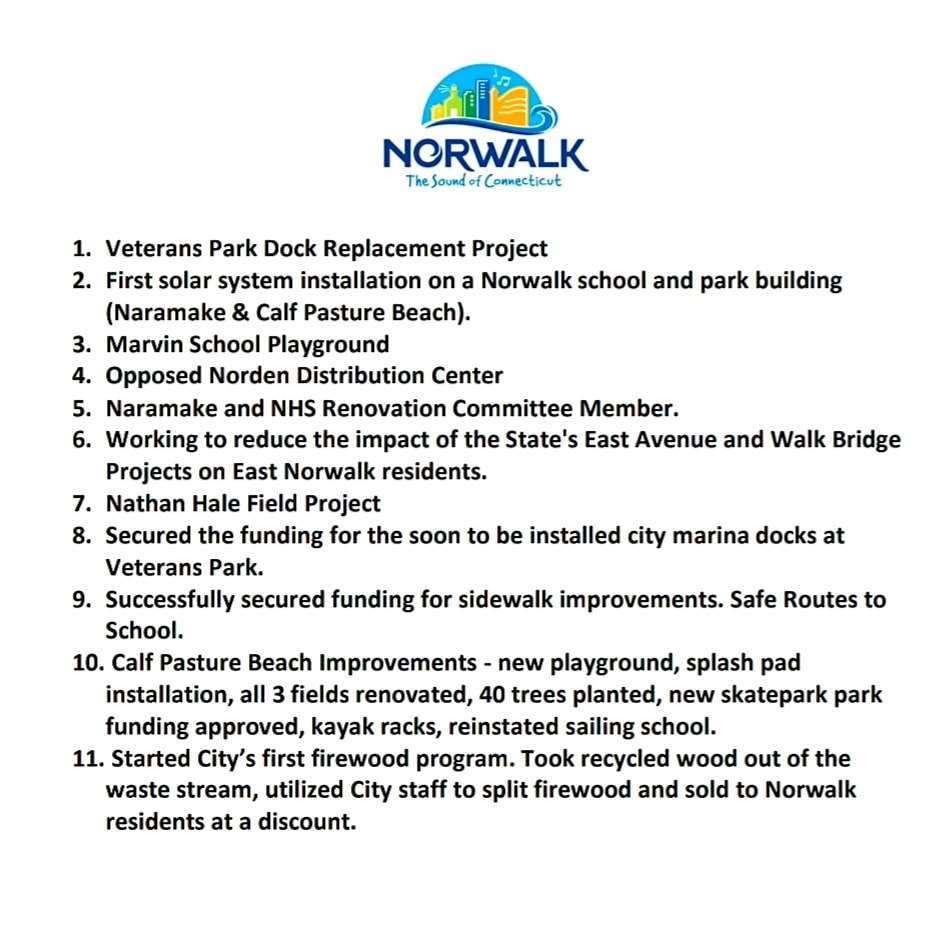 A post on Common Council member John Kydes’ campaign Facebook page, a list he says are his accomplishments for East Norwalk. The resident firewood program was begun by the Mayor’s Energy and Environment Task Force, in conjunction with the Parks Department and the Department of Public Works, in late 2014. This was last advertised in 2016. Kydes led the task force; it hasn’t met since 2015. The solar installation at Naramake is only on the addition there; a contractor replying to an RFP in 2016 called it “a small portion of the roof.” There were 18 solar panels installed on the roof of men’s bathhouse at the beach in 2016. Mayor Harry Rilling said at the time that they would save the City $1,000 a year, adding up to $20,000-30,000 over the life of the project.

While Kydes clearly has more followers, many of the comments are critical. Kydes has, under a City logo, posted a list of what he says are his “accomplishments in East Norwalk as a Councilman.” Many appear to be items he voted on, as part of a block of Council members, not issues he took a lead on, and his assertion that he opposed the application for a distribution center in Norden Place inspired pushback.

“East Norwalk residents and their community group pushed back hard on the 10 Norden Place applicant with a petition, emails in opposition, protests and public comments to the applicant. Their hard fight was the accomplishment. Please give credit where credit is due,” Mimi Chang replied.

Kydes spoke out against the Norden project as a private citizen, as he could not comment on pending zoning applications as a member of the Common Council, he said at the time.

Kydes is also running for Mayor in 2023. In July, NancyOnNorwalk asked Wells for the party affiliations of the contributors to Kydes mayoral campaign. More of them were Republican than Democrat.

“This is a Democratic primary and, per party rules, only Democrats may vote,” Wells explained. “There is no Election Day Registration in a primary, but voters may switch their party enrollment from ‘Unaffiliated’ to ‘Democratic’ up to Noon on Monday September 13, 2021 and new voters may register and join the party up to that same time — But they must do so IN PERSON at the Registrars office, room 103, Norwalk City Hall, 125 East Avenue. It is too late to register, or change registration on line, or by mail for this primary.”

When was the last time there was a Council primary in C?

“Can’t remember any council primaries in Dist. C, but as you know very seldom does anyone bother to primary in any district,” former Mayor Bill Collins said. “A little competition is usually good for the system, and since these challengers don’t seem fascist or racist it may be a healthy race. It would be nice to see candidates from either party who actually have some ideas for change.”

Nancy should reconsider naming her blog Nancy on Kydes. I’d really like to know what else is going on in Norwalk besides this.

What a massive waste of time and money!

The only tactic from any of these new candidates so far has been “fact checking” Kydes’ palm card and attacking him for ACTUALLY questioning a budget request that has repeatedly been funded and also gone up year over year (although cleverly re-branding it the “Kydes-Ammendment” to try and drum up support and make it into a big-bad-mean thing that the Council wanted accountability from the BOE). You mean they are not supposed to do that? The BOE asks, they should say how high? Might it be reminded that the BOE can also never get less than what it got the year before in CT…sweet deal!

Interestingly, Kydes has kids in the system too so why would he actively work against the BOE? Its not in his best interests to do so or his families. It’s laughable that they have try to make him into a Republican when this clearly was admitted to be a clerical error in a previous NoN article. The best they can do here is to repeatedly try to make something into what it is not.

Lastly, several candidates over the years have sought cross-endorsements (most recently, Lisa Brinton), I’m not sure how wanting to work with both sides has become such a bad thing. This screams politics / power struggle. All the new candidates have pledged blind support to the BOE and to the Democratic party to get endorsed. We can only hope the Independent party can shake things up and the Republicans actually try to start recruiting and running candidates so you don’t have candidates running un-opposed and walking onto the Council.

But hey, like I’ve always said, its always easier to spend other people’s money. Thanks for costing the Town 10K…not like Small Businesses could have used it or anything.

He spoke as a private citizen on the Norden project, like people did know he was on the concil. He is a shallow rudderless politician. He needs to find a backbone.

Lived in EaNo for 27 years and all we’ve got are empty storefronts and an old covered-up sign at Exit 16 that must be great-great-great grandfathered in. Time for a change!

Does any of this make a difference, at all? We’re talking about four people in the same party challenging each other. But once whomever among them gets nominated everything goes back to normal. It’s unrealistic to think that any of them will change the world, or little old Norwalk for that matter. They will just be, to quote Pink Floyd, “Just another brick in the wall” of the same party platform, and will do as they are told by party honchos. It’s only different ideas and ideology that make a difference. I would like to hear how the four contenders think they will differ from the others and make changes that will make a difference. If they can’t separate themselves from the herd the voters might just as well close their eyes and mark two random boxes on the ballot.

To all the disgruntled Republicans sitting on the sidline… this is why ultimately, the primary system is your *enemy*.

Primaries were invented to help parties manage the spoiler effects of First-Past-The-Post elections by settling internal disputes internally, instead of by splitting their votes with breakaway parties.

They were sold to the public on the *LIE* that they made parties “more accountable” to the people. Instead, they just made it easier for parties to consolidate and keep the one-party control you Republicans claim to hate so much.

Unless you’re willing to wait another few generations for macro trends to flip the party dominance in Norwalk – by which time you’ll either be dead or have suffered for decades under the rule of a party *you hate* – the only way out is to embrace open primaries and alternative voting methods like Ranked Choice and Approval.