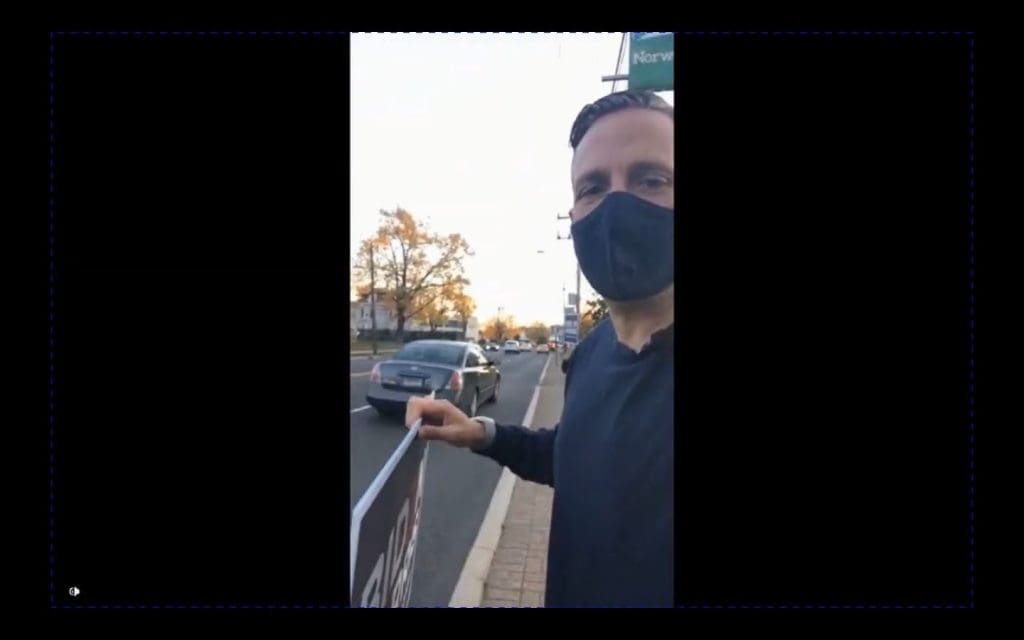 NORWALK, Conn. — Norwalk Democrats took to East Avenue on Saturday to celebrate the declaration that Joe Biden has won the 2020 Presidential election.

Perhaps Stuart Wells can update this – but as I recall – the Norwalk electorate shakes out roughly 20,000 registered Democrats, 9,000 registered Republicans, and 22,000 unaffiliated and/or independents. The largest voting block – The “U” party – has zero say in who is on the ballot.

During Joe Biden’s victory speech last night – he talked about the dreaded “moderate” approach that most every partisan in America can’t stand – because compromise and negotiation have become swear words to the faithful of the two major parties. But – not the “U” group.

I ask a question of this blog, the readers, and anyone else who cares to weight in. When was the last time you saw a Bob Duff photo opportunity include anyone other than fellow D party loyalists? Rilling? Same.

To those two – I challenge you to live to your party leader’s commitment. Let’s see either of you welcome people – who represent the majority of Norwalk taxpayers (R’s and U’s combined) – to join you when representing our city. Let’s see some of the other guys (including women) in the photos, as representative that you two are working WITH and for ALL of Norwalk, and not just your party faithful.

I don’t believe you can do it.

I think this was a victory for everyone!
Now things can move forward, alot of social healing and respect and tolerance and acceptance needs to replace the last 4 years of misdirection!

Just to keep the discussion sober, let’s stick to the facts:

I’m sure after 40 years of Democrats ruling the roost there’s a rational explanation for coming in last place in 2019. The inept New York Mets in the 60s were called the Lovable Losers. Maybe that’s the title CT voters keep shooting for. Somehow we keep voting these same policy wonks into office year after year.
But that’s ok. Joe Biden will now wave his magic wand and overnight CT will shoot to #49 next year. Maybe 48 if things break right.

Just think about that for a moment – Our state will be making progress if we’re the 2nd worst state for job growth next year. Are we stupid or do we just have poor alternatives. No offense, but I think we’re stupid.
On a more positive note: Notre Dame continues their magical run in 2020. I would like to apologize to any Norwalkers who were awoken at midnight Saturday to the sweet music of Notre Dame’s fight song.

@John O’Neill: The late Sy Syms used to say, “An educated consumer is my best customer.” I would submit that, when it comes to our local electorate, “Uninformed and uneducated voters are our worst nightmare” would probably be appropriate. After what happened last Tuesday, I wouldn’t count on anything changing in Hartford. It’s as if we are determined to be number fifty of fifty and that’s saying something considering what disasters Illinois and New Jersey are.

@Frank – Your inference is the Trumpism caused all the mayhem over the past 4 years. Things will magically get better over the next few years? I hope you’re right. I also hope I hit the lotto later this week, but I’m not planning around it. Although Trump has been certainly divisive, it is my belief that he hasn’t been alone in today’s crazy political climate. Hell, our very own Bob Duff faked an “intimidating” police encounter. What was that all about? Does he get a free pass because of Trump-syndrome? The citizens of Norwalk continue to hold their breadth awaiting his apology. BUT, Bob is playing the long game and expecting the issue to be forgotten. Most of his supporters still think the video was fabricated for goodness sakes.