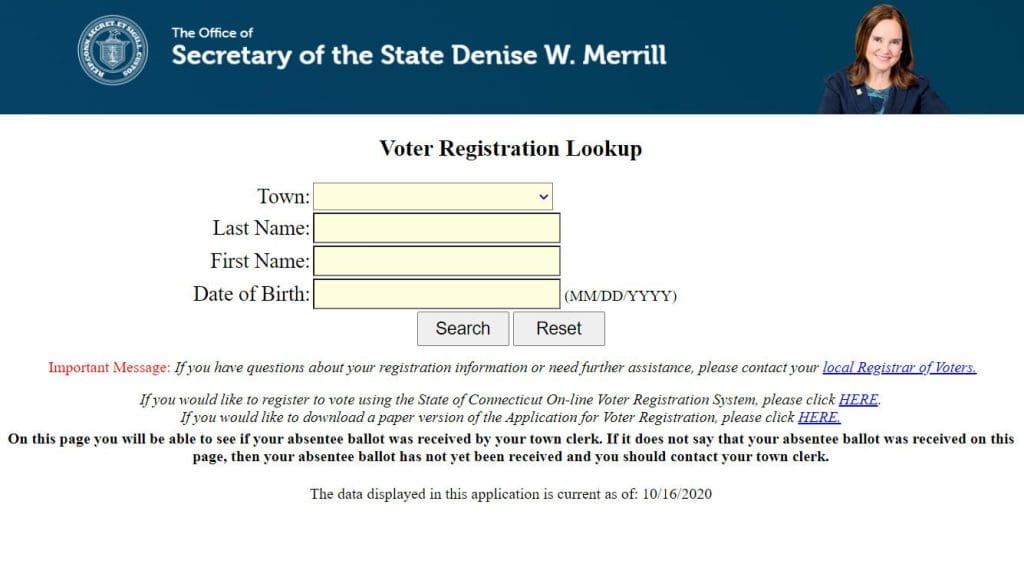 You can go to the Connecticut Secretary of State’s website to check on your absentee ballot. Click on the photo. There’s also a link in the story, below.

Interest is high, leaders agree. While everyone is focused on the importance of this particular Presidential contest, voter turnout is always higher in presidential elections, about two-and-a-half times what is seen in a municipal election, Norwalk Democratic Registrar Stuart Wells said.

In 2016, were 38,884 ballots cast. So that gives you some perspective on the number of absentee ballots filed. Almost 16,000 Norwalkers have now requested absentee ballots.

If you’ve dropped your absentee ballot in one of Norwalk’s three dropboxes, or put it into the mail, you can check the Secretary of State’s website here to see if it’s been received.

“The number of newly registered voters is normal for a presidential election. Norwalk has a lot of apartments and apartment dwellers move much more frequently than home owners. Turnout is much higher in presidential elections than in municipal elections (about 2-1/2 to 1). So what happens is that the people who have moved out of apartments since they voted in 2016 (and to a lesser extent in 2018) are now registering in their new towns and cities of residence (and going off the voter rolls in Norwalk), and the new voters who moved into those same apartments since 2016 or 2018 are now getting around to registering in Norwalk. You just can’t beat a year (or more) of 24/7 news coverage of presidential elections for reminding people about their civic responsibility — even though municipal elections may actually be more important in many ways (schools, property taxes, local zoning and land use). But it is what it is, and overall turnout this year will be three times what it was in 2019.

“This has happened in every four year cycle going back to 2000 and no doubt before that. The only thing making the actual numbers deceptive is that 2016 was when on-line voting and voting registration changes at DMV took effect, and the overall registration in Norwalk increased by 15% to 20%. (It is hard to be more precise as there are several new apartment buildings, and a slow increase in Norwalk’s population as well.) Over the next four years you will see a resumption of this pattern with total voter registration going down slowly until the next presidential election. It goes down because our spring voter canvass will identify some, but not all, of the people who moved away — largely those who changed their address with the post office.

“It is not just apartment dwellers, of course. Another pattern we see is people turning 18 and registering to vote. Then they go to college somewhere, but keep the good old family home as their voting address, because they still actually live there. Then they get a job somewhere, but keep the good old family home as their voting address, because the job is a low level ‘first job’ and they expect it to be a temporary one. Then, of course, they end up moving in with somebody on a romantic basis — but they don’t know if that will last and their job situation is still fluid, etc. etc. Nowhere in this typical life story do they change their address with the post office because mom & dad will take care of their mail and the only piece of mail that matters to them anyway is their cell phone bill which they probably pay on line anyway. Then, finally, the girl in the relationship (or the next one, or the one after that) gets pregnant, one or both find a more permanent job and so they get married — maybe even buy a house and actually settle down AND finally maybe register to vote where they now live — and we find out about it. OR, especially this year, mom calls us because ‘the kids got absentee ballot applications and they haven’t lived here for years’. We can’t remove them from the voting list right before an election based on mom’s email or phone call as we have to have something in writing from the voter him or herself. Next spring we can start the process.”