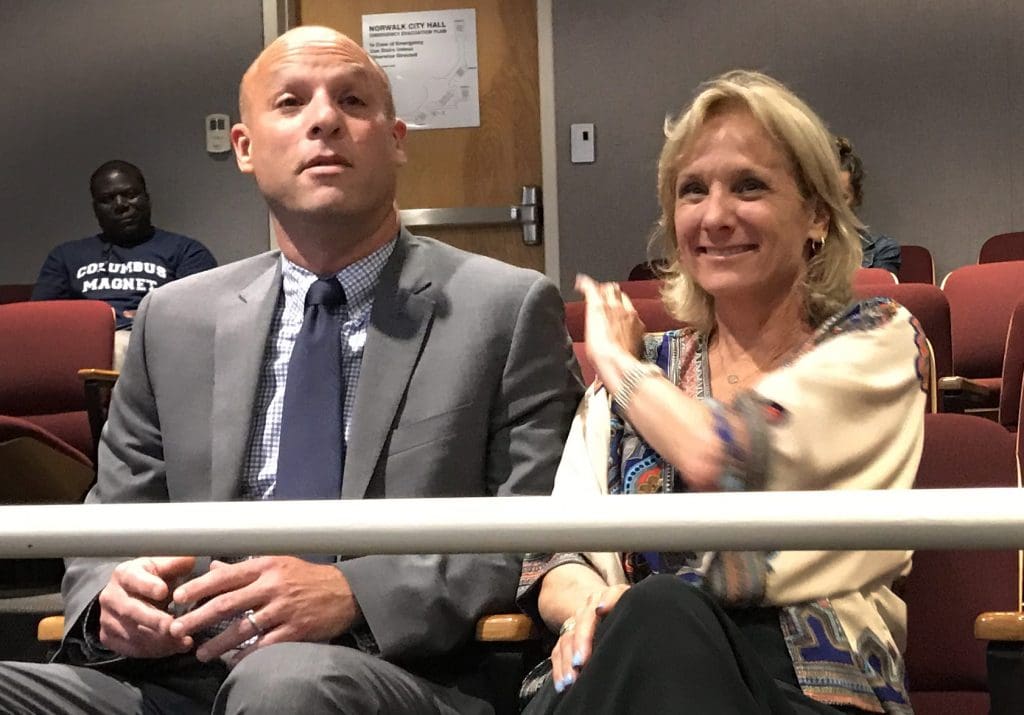 Hurwitz was Brien McMahon High School principal for four years and a Norwalk stalwart. His quiet departure follows controversy: Hurwitz and two other BMHS administrators were put on administrative leave without prejudice in April, a mysterious move that had Norwalk wondering what was going on.

At the time, NPS Communications Director Brenda Wilcox Williams said that they were on leave “while the district addresses a personnel matter.” Norwalk Superintendent of Schools Alexandra Estrella followed that with an announcement that “we are not investigating any allegations of sexual abuse or sexual misconduct.”

All three were eventually reinstated but the return was brief for Hurwitz, who was moved to Central Office in mid-July to serve as education administrator of data analytics. Assistant Principal Barbara Wood was named interim principal and is still serving in that role.

An anonymous comment left over the holidays alerted NancyOnNorwalk to Hurwitz’ exit. “No one mentions he has left the district,” the writer said.

“After more than 25 years with Norwalk Public Schools, I have decided to accept a position with the Stamford school system. I have enjoyed my time in Norwalk and have benefitted greatly from the richness of the diverse student body and the support of community. I am resigning from my position, Administrator for Data Analytics, effective at the end of the day on September 10, 2021.”

Neither Norwalk Board of Education Chairman Colin Hosten nor Wilcox Williams offered any comment when asked for one Monday by NancyOnNorwalk.

Hurwitz was BMHS Assistant Principal “from 2008-17, supervising academic departments, overseeing all aspects of school safety preparedness, and working with students, families and teacher to ensure successful progress towards graduation,” NPS said in a July news release. He “joined the school in 1996 as an English teacher, and also served as class adviser, newspaper adviser, freshmen baseball coach, yearbook adviser and NEASC accreditation chair.”

Hearst Media learned Arcari had been accused of failing to report physical abuse he allegedly witnessed several years ago between students.

There’s been no indication whether or not the developments were related. “Personnel matters are confidential,” Wilcox Williams said in April.

Amazing that there’s still room under the rug to sweep still another matter that OUR employees don’t want to reveal to us, the bill payers. Is there a NPS budget line item for payment of lawsuits it faces? Has our insurance premium increased? If someone departs after malfeasance committed while on OUR payroll, why are we not so informed? Do our elected representatives (City Council) know the whole story?

So….We only have two High Schools in Norwalk, but can’t fill both positions.
What’s baffling to me is the voters should have known this before Board of Ed elections (Some did/Most didn’t), as an example of the ineptitude and lack of foresight by current BOE leaders. Or is Estrella waiting for one of her friends to retire from NYC to take the helm at McMahon. With all the retired NYC administrators working in our system one would think Norwalk is located in Florida.

Another example of the long standing need for improved personnel procedures in the City’s public school system. When will the BOE take a more informed interest in such matters ?

(Please use this version. I hit send before finishing my last paragraph and last sentence.)

This is a sad and puzzling story.

I don’t have the inside information on Mr. Hurwitz’s departure, but it is beyond unusual for a principal to leave for a different administrative position within the district only weeks before the beginning of the school year, and it is even more unusual for a principal to decide to leave a district administrative position in order to return to the classroom.

So it’s January and McMahon still doesn’t have a permanent principal. Moving him to an administrative position in central office during the summer was irresponsible on the part of a superintendent, who either allowed it or orchestrated it. It doesn’t matter if he wanted to leave or not; the superintendent has the responsibility to ensure strong and stable leadership in the school, and having an interim principal for so long isn’t ensuring stable leadership.

In a posting I sent regarding a different NON article yesterday, I made reference to a T-O-X-I-C environment in the Norwalk Public Schools. Let me say that people who experience the district work environment now and who compare it to the environment before Dr. Estrella’s arrival are greatly discouraged at the terrible decline. They are also sometimes shocked by the behaviors and attitudes of a couple of people she has put into critically important positions.

I would offer an admonition to the Norwalk Board of Education (aka the Norwalk Flock of Sheep), but I have given up on them.

Finally, I don’t know why Mr. Hurwitz was on administrative leave, but if he was allowed to return, he must have been cleared of wrongdoing. Even a bad superintendent wouldn’t allow a principal who was guilty of a serious offense to return to a school.

This is really sad. I agree, this should have been made Public before now. We are taxpayers and deserve to know what’s going on in the schools whether we have children in them or not. And why is it that when they refer to the music department they always say Three music teachers but only mention Two by name? RONALD SECCHI!!! SAY HIS NAME! He is so enept with leading the band. He’s great with the orchestra and a good conductor and good at making sure his children didn’t pay band dues. He let so much stuff get by, it’s really sad. The entire school system Needs an overhaul!

Good luck to Principal Hurwitz. He was a well loved principal (I was there for an event a few years ago and witnessed the heartfelt good feelings among the students) . He isn’t the first administrator in the last few years who realized it may pay well but the job is increasingly frustrating and one allegation-can cause incredible damage- even if it turns out to be untrue.

While we will likely never know what was behind this turmoil at BMHS, losing this man as an educator & administrator in Norwalk has lessened the quality of professionals on staff. Scott was recognized State wide as being one of best. A solid citizen, of high integrity and loyalty, devoted to the well being of the students & staff. Highly respected and admired by everyone he interacted with. Very sorry to see him gone, but happy to see him involved in Stamford Public Schools, where I have little doubt that he will quickly rise to leadership positions. Just another loss of talent for a troubled public school district.