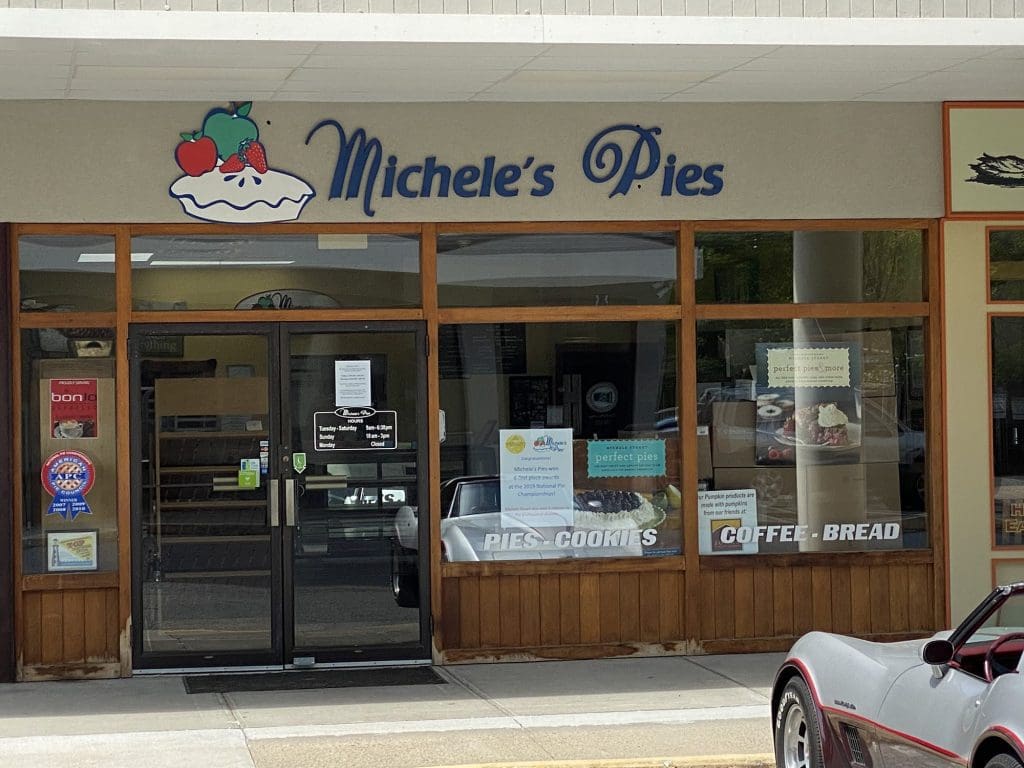 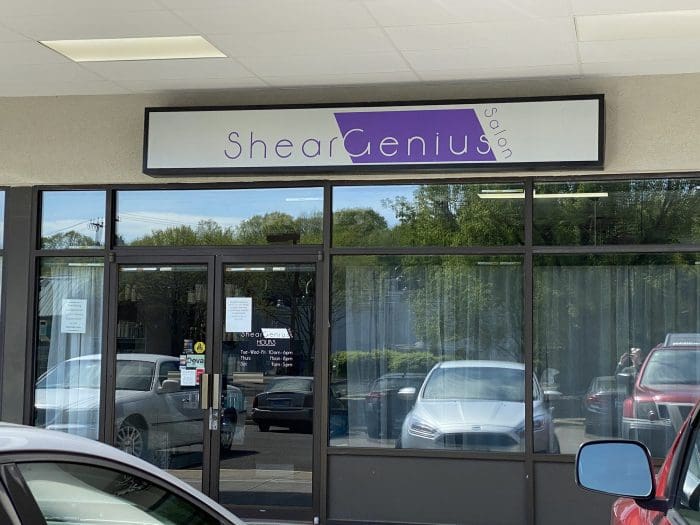 NORWALK, Conn. — On Saturday, March 14, Brooke Capriotti’s Shear Genius Salon in Norwalk had a full slate of clients. But by Tuesday, March 17, a few days ahead of Gov. Ned Lamont’s executive order closing nonessential businesses to slow the spread of COVID-19, Capriotti had already shut her doors.

Her breaking point came when a client receiving a service “informed us that her husband was exposed to someone who had it,” Capriotti said. “I didn’t deem it safe to stay open.”

Michele Stuart, whose Michele’s Pies is located just steps away from Capriotti’s salon, decided to close for two weeks after the governor’s order, even though as an essential business she was allowed to stay open.

“We closed for two weeks and then we opened up doing curbside,” she said. “We were just kind of seeing a lot of other businesses, food-type businesses, doing that, and just financially, I couldn’t afford to close completely, so we decided we would try it and see how it would take off. We did a big social media campaign in the beginning, and the first couple weekends were great.”

With some businesses —  outdoor restaurants, retail and malls, and university research centers among them —  allowed to reopen on May 20, both Capriotti and Stuart are trying to adjust to their “new normal.”

For Stuart, having adjusted to curbside, not much is changing.

Capriotti, her friend and neighbor, whose 11-year-old business has been closed since mid-March, was supposed to be a part of the phase one reopening plan, but Gov. Ned Lamont announced on Monday that salons’ reopening date would be pushed back. 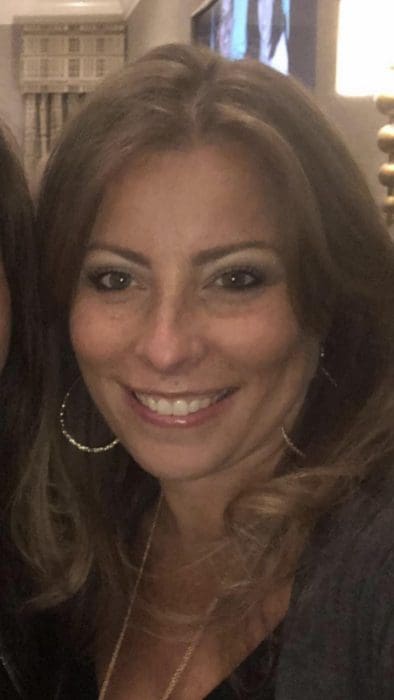 “I’ve had mixed feelings on being open in phase one to begin with,” she said. “As a business owner, I want to get my business up and running and generating money, but just as a person, it’s been a little scary to be put into phase one with being a profession that we can’t socially distance.”

Still, Capriotti said she’s preparing for what will need to happen before the new reopening date comes around, sometime in early June. So far, she’s gotten about 90 percent of the personal protective equipment she will need for her stylists.

She knows that when they are able to reopen, things won’t be the same right away.

“We will only be able to see half the amount of clients per day,” she said. “Also, working under strict guidelines with all the PPE (personal protective equipment) that we have to wear, it’s going to be difficult to do our job wearing something over our clothes and a face shield and a mask and gloves and everything else, and also having to put extra time in between clients to sanitize.”

Capriotti, who typically employs five stylists, is setting up to keep them as far from each other as possible. But there’s no way they can be distant from their clients, she said. “We work three inches away from their face.”

Given the realities of her business, Capriotti is doing all she can: sanitizing the salon, rearranging the layout, and reworking the schedule to keep everyone safe.

Capriotti said many – including the government – think of her industry as one-on-one: one stylist interacting with one customer. “But when we see seven, eight clients a day, it’s not really a one-on-one, it’s whoever they’ve been surrounded with, which I don’t think people are looking at that way,” she said.

Adapting to the new conditions

In addition to her health and safety worries, Capriotti has economic concerns. She expects to do half her usual business over the next few months.

“It’s going to be hard to actually make any money as things go on, both for a business owner and then my stylists as well,” she said. “They’re commission-based…so the less people they see, the less money they make. It’s going to be very hard. I believe it’s going to be survival of the fittest as long as this goes on, and it’s pretty much if you can end up going a year or two without making any kind of money, you may still have your business open at the end of this.” 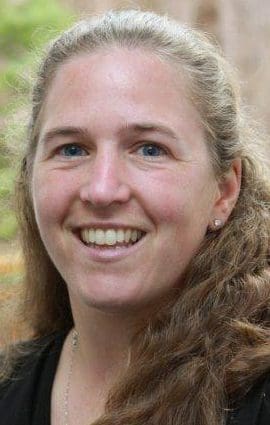 Stuart, who has owned her store since 2007, has also been doing about 50 percent of her usual volume. But she considers herself lucky, having shifted from a six-day workweek to two or three days of curbside pickup. She’s also managed to keep on “a handful” of employees to work on orders.

“I have somebody who goes in during the week and kind of like gets it stocked up on some things we need to get stocked up on. But Fridays and Saturdays are really long days and then we’ve been open on Sundays — we were open on Easter, we were open on Mother’s Day. We were open a couple Sundays before that, just kind of long days,” she said. “Our business is probably at, like, 50 percent for the week, which is not bad.”

While Stuart said she has no plans to reopen the store to customers anytime soon, she could see her curbside offerings expanding.

“I think we technically could now (have customers in the store) but just for the safety of my staff and myself — I have three kids at home, I’m not in any hurry to open the doors and it’s working the way it is right now, so I’m going to keep doing the curbside for a couple days a week for now, until things really settle down,” she said.

Both business owners said they were able to secure Paycheck Protection Program (PPP) loans from the federal government, but neither have received clear instructions on how to use them or what the conditions are.

Capriotti said she has been trying to get information about how she can use the loan properly, so it doesn’t affect her negatively in the long run.

“I was very fortunate that I was able to secure the PPP loan,” she said. “The stipulations of it are very unclear, both if you ask your CPA, your bank, or you try to get information from the government. As much as we would love the help, if the stipulations are going to be working against us in the long run… that’s been very hard with the PPP loan.”

Information in general for business owners has been hard to come by, both women said.

“The news and media make it seem like there’s been that information available and readily accessible to business owners when it’s been extremely hard to get any answers, and when we do, we only get half of the answers,” Capriotti said.

She said that she hopes with the reopening date pushed back, she and other salon owners can get more guidance from the state about how to train for and work with the proper PPE, as well as see how this first phase goes.

“Hopefully they just see the effects of when they do open the state for the first phase and are able to analyze what’s going to happen with businesses that are not such high contact as ours,” she said.

To continue to keep some revenue coming in, both women said they had to think of new ways to reach their customers.

Capriotti turned to a curbside pickup program where people could order products and come get them.

Stuart created an online system to help make it easier for customers to order.

“We had to put up an online [system] which we’ve never done before, online ordering, so we had to alter, we had to do that,” she said. “We had to figure out how to do that plus we couldn’t fit all of our menu items on there. We were limited on how many items we could put on the online. We’ve figured out, we’ve grown our online ordering. We’re not doing absolutely everything that we’ve done in the store, but we’re doing most products.”

She’s also been more active on social media, a strategy Capriotti adopted as well to help reach out to customers and keep them engaged.

“They’ve been appreciative, everyone’s been very nice, and everyone’s very thankful that we’re open and excited,” she said. “I think because we’re kind of a comfort food — plus we also have our savory stuff, meals basically, so people love that they can just come pick up a meal like ours and have it as an easy dinner. Plus, they don’t have to go into a food store which I think they’re appreciative of.”

Despite being open just two days a week, Stuart said she feels busier than ever.

Capriotti, who has a son in elementary school, said her days include “trying to homeschool my son — play teacher, keep in touch with my staff and my clients, and try to prepare as best as I can.”

Stuart said she can’t really think about expanding her hours until she knows what summer programs might be available for her kids.

“I just need to figure out with the kids and everything, because now camps — a lot of the camps that they were doing — aren’t happening, and day care’s not open, so I can’t do it all. I do a lot, but I can’t do everything,” she said.