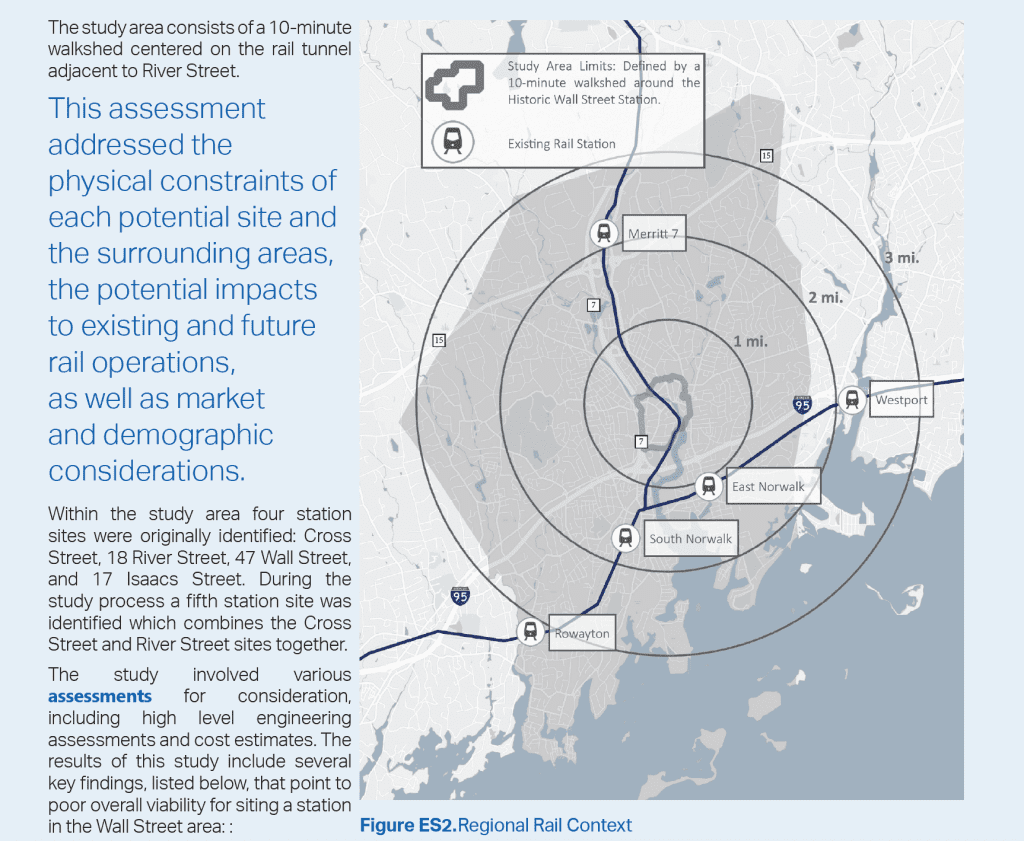 NORWALK, Conn. — In an opinion five years in the making, the Connecticut Department of Transportation recommends against creating a Wall Street train station.

Last week, the State released ConnDOT’s 104-page report, funded in 2017 by a $250,000 State grant. The report was completed in July but City officials met with ConnDOT for a final discussion Oct. 21, according to a PowerPoint presentation provided to NancyOnNorwalk by Norwalk Chief of Economic and Community Development Jessica Vonashek.

“The City of Norwalk thanks CT DOT for conducting a thorough analysis to consider the feasibility of reestablishing a train station in the Wall Street corridor. After examining five locations in the area, their study determined that a station is not feasible,” Vonashek said. “While we are disappointed with the conclusion of their report, we are grateful for the time and effort they spent exploring the potential return of a Wall Street train station.”

She directed Norwalk citizen to contact the State for explanations, continuing, “For questions related to the report, please contact Elise Greenberg, the Project Lead of the Wall Street Station Feasibility Study, who serves as the Supervising Transportation Planner at the Office of Strategic Planning and Projects for CT DOT. She can be reached at [email protected]”

The Wall Street area once had a train station, under Wall Street. It was said to have been destroyed in the 1955 flood and not rebuilt.

ConnDOT, in the study prepared by AECOM Technical Services Inc., states that it completed upgrades to modernize the Danbury Line, including a signalization system, and then worked  with the City “to examine potentially restoring a rail stop in the Wall Street area. The Wall Street area had rail service from 1860 until around the 1930’s when the station stop was closed and service converted to bus.”

It would cost $59-62 million to build a station to modern standards, ConnDOT states.

“A smaller investment into existing transit/microtransit systems could likely create a focused and highly effective shuttle service within the study area that links to the main line and points north of Danbury. The frequency of service and the flexibility of routing that can be accomplished with bus-transit solutions can be provided at a fraction of the cost of a train station,” the study states.

A new train station would add four to eight minutes to the route, the study said. It notes that the Danbury Line is a 24.2-mile-long branch of the New Haven Line (NHL) with seven existing stations, not including its terminus in South Norwalk. The passenger schedule consists of 28 weekday trains between Danbury and South Norwalk, an increase from 22 weekday trains in 2009, and only eight of those rides go directly from Danbury to Manhattan. Other riders transfer onto or off of the Danbury Line via South Norwalk.

“The single-track alignment requires a precise operation to avoid delays and to maintain reasonable travel times, as long waits at passing sidings greatly lengthen overall travel times. Therefore, the train schedules are carefully arranged to time the train ‘meets’ at the siding locations to minimize wait times,” the study states. “…Deviations from these times for just one or two trains could impact the entire schedule.”

“The lengthened running times would also reduce the amount of already limited time the train has to reverse direction or ‘turn’ at Danbury,” ConnDOT states. “Train crews need sufficient time to perform mandated safety checks before each run and safely orient the train back toward South Norwalk. The schedule may be impacted in order to maintain time for the safety checks.”

No wonder it could not be justified.

From the same agency that thinks the Walk bridge is a good idea and take 12 years to replace guard rails on the Merritt. The same agency that has oversight for the country’s 3rd worst rated infrastructure. If the folks in the Wall Street area will simply take a shuttle to the train station, then why aren’t they doing it right now? Why aren’t they taking one of the empty wheels busses? The argument that we have 4 stops is absurd. Greenwich has 4 stops on one line and fewer residents and businesses. We have three stops on our main line and one on the Danbury line. Sounds to me like we just wasted $250k for a predetermined conclusion. Once again, Norwalk gets screwed. DOT owns us.

@Bryan, there could be PLENTY of reasons why people wouldn’t be using existing shuttles.

The main reasons why transit doesn’t get used are (1) frequency of service and (2) timeliness for connections.

Maybe we should start by asking those people why they aren’t using existing options, instead of just taking a “if we build it, they will come” attitude and plopping $60M stations around willy-nilly.

If you’re truly a conservative, then I hope you’d agree that the government should *prove* that a station will benefit the community, and we shouldn’t just start from a rash assumption that we *deserve* one based on population numbers.

@DM. Reality escaped us a long time ago. We’ve morphed into a community that accepts leaders’s absurd claims that new development doesn’t use water. But while we are fighting the insanity, I for one can accept that money does grow on trees and if you build it that they will come. $60 million doesn’t seem like a lot when we are paying $28 million to make a few more parking spots up on the Glover ave stop.

@Bryan – When I was a young Republican, there was a saying: “Don’t open your mind so much that it falls out the back of your head”.

Your words make me fear that one-party-rule has warped your priors so much that now you think like the Democrats you so adamantly oppose.

If that’s the choice you’re presenting voters, well, it’s no wonder they don’t see any functional difference between the two parties. All you have left to fight over is a bunch of tribalistic culture war politics.

The DOT built a $700 million busway on top of existing train tracks connecting New Britain to Hartford, that pre-covid saw 3000 riders a day. It takes a $20 million subsidy to run it. The state built a $45 million minor league baseball park in Hartford for the New Britain team to play there. Is $60 million too much for a Wall St train station? Maybe, but let’s not pretend this is some move at fiscal restraint.