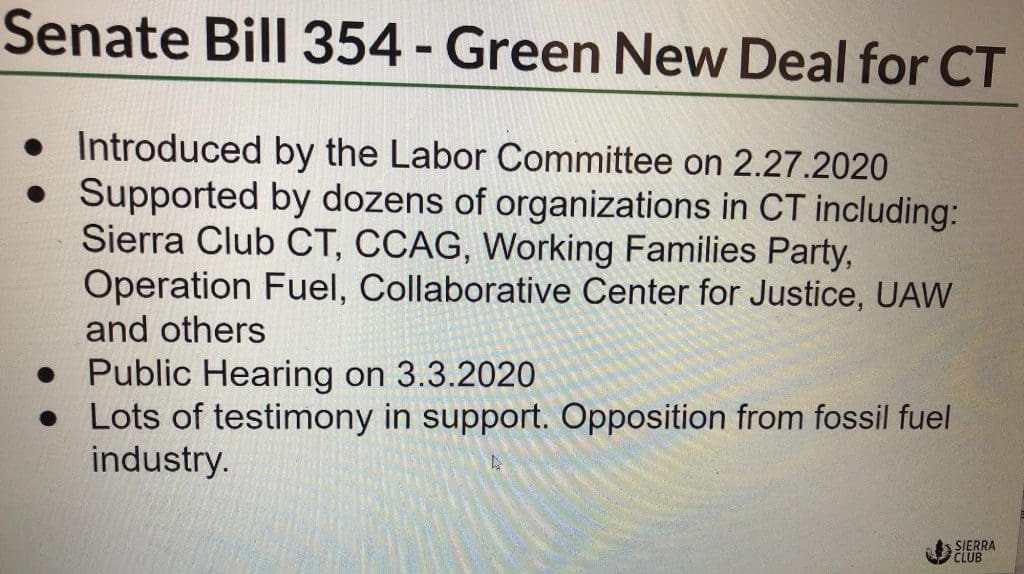 NORWALK, Conn. — The Connecticut legislative session is on hold due to the COVID-19 pandemic but a Fairfield County activist group, with strong Norwalk connections, focused Monday on the Statehouse, seeking answers on prospective legislation related to healthcare, climate change, and affordable housing.

Lembo discussed the public option while addressing the Wall Street Neighborhood Association in May, a visit organized by former Norwalk Mayor Bill Collins on behalf of CCAG.

“I’ll start with what happened last year,” he said at Monday’s virtual meeting. “We got a bill up and going in a way that many of us were surprised how quickly it got traction and how fast it was moving.”

In the end, Lembo said an “11th hour” move by Cigna helped to halt the legislation’s progress.

“Cigna, through their representative at the capital in the wee hours of the morning, said and I’m paraphrasing… ‘if Connecticut does this, we’re going to have to rethink our commitment to Connecticut,’” he said. “People got very nervous about the prospect of job loss. I’m not insensitive to that. Obviously, no one wants to see job loss, but it was a complete fake and most of us knew that.”

Lembo brought up the proposed legislation again this session before the pandemic; it would have allowed companies with fewer than 50 employees, as well as nonprofits and labor unions, to join the state-operated Connecticut Partnership plan, which at this point is only open to municipalities or other State political subdivisions. Individuals on Access Health CT, the state’s insurance exchange, would also have a third option for insurance.

This year, the bill is Senate Bill 346, Lembo said, and it has successfully passed the Insurance Committee, including a vote from a Republican lawmaker. “The bill was working its way through the process and now we have a pandemic.”

While Lembo said that providing health insurance is complicated, the COVID-19 pandemic brought to light the need for better care, particularly preventative care.

“No one can look at what’s happening now and say that access to care isn’t more important than ever,” he said.

Lembo said he is unsure if the legislation will move forward this year and what the end of the session or any special sessions will look like but the uncertainty provides time to allow him and others who support the public option to provide information and organize.

“We organize to counterbalance the influence folks like (the Cigna opponents) have at the capital,” he said.

While there’s been a lot of national media coverage of the federal “Green New Deal,” proposed by progressive members of Congress, there is also a proposal for a Green New Deal for Connecticut that was introduced this session, along with a regional New England Green New Deal that is being worked out, Dynowski, of the Sierra Club, said.

“They all look different, but what’s not different about them is they try to tackle climate change and inequity at the same time,” she said.

All of them work to transition the economy from a fossil-fuel based one to a clean energy one, she said.

In Connecticut, the Green New Deal looked to address four areas — climate, jobs, inequity, and accountability, she said. The state’s largest greenhouse gas emitters come from three sectors — electricity, transportation, and home usage — so one of the goals was to move away from fossil fuel use there.

The legislation also included job training pathways for new jobs created in the clean energy sector as well as prioritized environmental justice communities, or those who had been affected by pollution and other climate issues, Dynowski said. It also required every State agency to review their outside contracts and permits issued to align with their goals for the future.

“This wasn’t going to be an easy lift — it’s its first year getting introduced,” she said. “It’s clearly going to take some time, but what we did see was this shared vision from a lot of organizations about where we could go and how we get there.”

The Sierra Club is also working to stop insurance companies from investing their assets in fossil fuel and underwriting fossil fuel-related projects, she said.

“Living here in Connecticut, we have a unique opportunity to pressure the insurance industry to do the right thing,” she said.

Last week, a report titled, “Connecticut Insurance Companies Fuel the Climate Crisis” was released that looked at the top 30 insurance companies doing business in Connecticut and their relationship to the fossil fuel industry.

“We started this campaign by issuing this report,” she said.

The next step will be reaching out to insurance CEOs, board members, and shareholders, to call on them to change their policies.

“Pressuring them to change some of their policies will make a big difference for climate change,” she said.

Boggs, executive director of Open Communities Alliance, a Connecticut-based civil rights organization that “promotes access to opportunity for all people through education, organizing, advocacy, research, and partnerships,” and “works to build an urban-suburban interracial coalition to support policies that lead to housing choice,” said that they’re working on legislation to make sure that towns across the state will allow multifamily and affordable housing in their municipalities.

House Bill 5132, which was in the Planning and Development Committee, aimed to “restructure the Zoning Enabling Act for clarity, promote the purposes of the federal Fair Housing Act, provide an administrative mechanism to promote compliance with municipal affordable housing plans, and require the Secretary of the Office of Policy and Management to convene a working group to study municipal affordable housing plans and zoning regulations.”

One of the things it does, Boggs said, is that it removes license to discriminate, such as the line that says a project can be denied for not “meshing with the character of the town.”

This language has been used as “a catch all” by some towns in denying multifamily and affordable housing units, she said.

The other thing her organization is working on, but is in the preliminary stages, is a fair share housing plan for the state.

Boggs said it’s based on the “notion that every town in Connecticut should be creating room for its fair share of affordable housing. Let’s figure out the capacity of each town to take on that housing and let’s allocate it in a way that is fair.”

She also said they’re looking to potential tie state aid to compliance to make sure towns and cities are “making active progress.”

“Our region is more segregated than any state in the South,” Boggs said. “That’s why we do this work.”