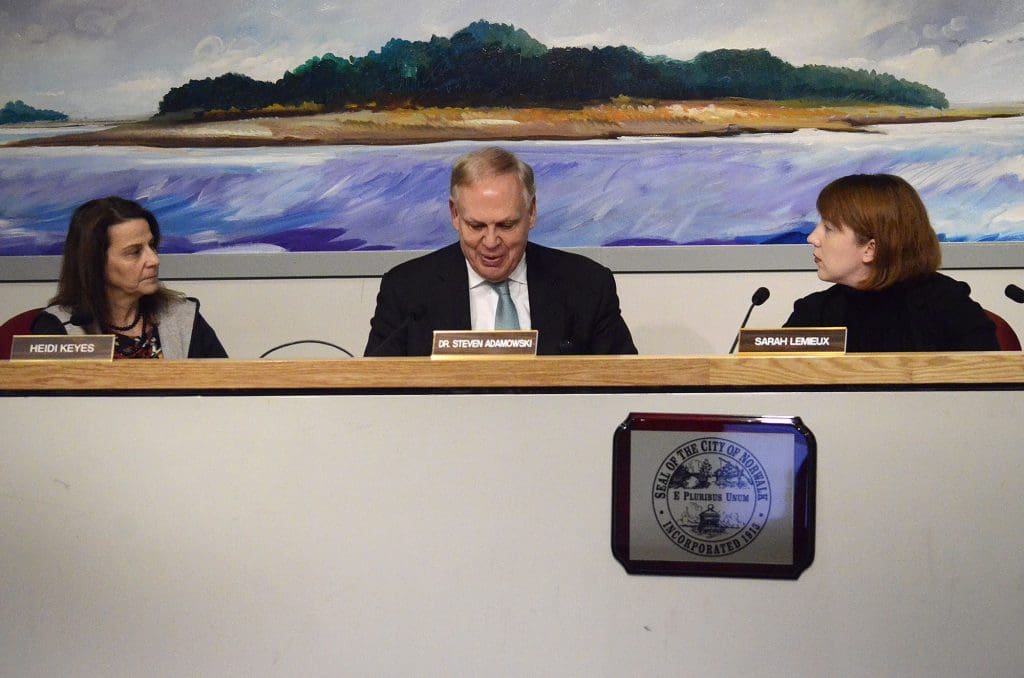 Three of Norwalk’s four middle schools are overcapacity, and English Language Learners (ELLS) comprise 18 percent of the school population, Adamowski said. There were 136 more ELL students on Jan. 1 than were counted on Sept. 13, a total enrollment of 2,127 according to the information provided. It’s 86 more than on Oct. 1.

Adamowski defended unflattering numbers for the Norwalk Early Childhood Center (NECC) by announcing that it would be best if a new location were found for the Norwalk Senior Center. The two institutions share the old Roosevelt Center and if the seniors moved out, the preschool could expand.

Enrollment has been a hot topic, as NPS is overcrowded. Norwalk is attempting to build two new schools; the Ponus Ridge Middle School expansion should be complete this year but the planned new school at the Nathaniel Ely site hasn’t gotten off the ground. This is holding up the renovation of the Concord Street school.

Adamowski commented that Norwalk needs to start planning for a third new school. A plan to build a new Cranbury Elementary is being floated and there’s talk of a new Norwalk High School.

The statistics for middle schools were:

The statistics on pre-K enrollment with SpEd status showed that there are 91 SpEd students at NECC and 63 typical. Federal law requires a 50-50 mix; the ratio is 59-41.

“This has been an area of discussion between myself and the Mayor for over a year now,” Adamowski said. “It’s very clear to everyone that we need to take the other side of the school building where the senior center is co located with the early childhood center, but thus far the city is unable been unable to find a location for the senior center. But this is a pressing issue.”

It’s expected that the SpEd preschool enrollment will grow, he said.

Adamowski spoke of an influx of 300 ELL students, mentioning that new school staff have been hired to deal with the influx, per the special appropriation recently authorized.

The Sept. 13 figure led to the request for the funding.  Adamowski said a year ago that English Language Learners were up to 16 percent of Norwalk’s school population. On Tuesday, he said it’s 18 percent and 25 percent is considered a tipping point.

“At that point there is a need for additional services. But there is also a very significant burden on the classroom teacher in terms of the amount of time that has to be devoted to the number of students who are learning English,” he said.

The ethnic makeup hasn’t changed since the start of the school year, he said:

The free and reduced lunch component of the school population is at 57 percent. “Remember, five years ago when I became Superintendent we were teetering around 49 percent,” he said.

Board member Barbara Meyer-Mitchell pointed out that Adamowski recently said that poverty is the driver for underachieving academics.

“Should we consider some sort of associated economic balancing throughout the district, such that we are trying to make sure that no school is up at a 75 percent poverty rate, while others in the same grade levels are sitting at 40 percent?” she asked.

When the CCJEF (Connecticut Coalition for Justice Education Funding) case was settled last year, one of the greatest changes was a switch from using racial balance as a factor to using economic balance, Adamowski said. The Raleigh-Durham School District had a policy to balance schools economically for years but about five years ago dropped it partially because parents hated the frequent redistricting.

“I’m not aware of any district in Connecticut that has done this,” Adamowski commented. “I think the opportunities for economic integration in Connecticut lie more between districts in areas because we have so many small districts.”

“I think that that is going to be the future,” he opined. “I would never recommend us trying to parse this out, given the number of low-income students we have but clearly there is a compelling case to look at this regionally.”

Board Chairwoman Sarah LeMieux observed that student demographic conversations have prompted a “focus on it as students who are taking something away.”

“I just want to frame the conversation as all of these students, ELL students, students with disabilities, every population of students that we have are an additive to the whole of our community,” she said.

Meyer-Mitchell agreed and said that Brookings Institute studies show that “shortly in the next few years, America as a whole will tip over into a minority/majority country.”

She spoke of “pearl clutching about our district tipping over into a minority majority district,” when “it’s just happening across the country.”

Corrections: This story was copy edited at 1:20 p.m to insert Nathan Hale in the list of middle schools and that it’s the Norwalk Early Childhood Center, not Academy.

Norwalk PS is a majority minority district and has been for quite a while. That’s not news.

However, it’s important for the BOE and Superintendent to understand that when a city’s schools, more and more, do not represent the demographics of the city in which they reside, it affects the economic value of the school district. Those paying property taxes for something that neither they nor their neighbors are using lessens the community’s interest in seeing tax increases for something that they get little benefit from. Norwalk PS, no matter all the good work being done, is not a selling point for Norwalk homeowners or homebuyers, Finding a real estate ad that touts Norwalk’s schools as a reason to buy the home is about as difficult as finding a needle in a haystack.

That reality means that asking taxpayers to shell out $14M for the 2020 BOE budget becomes a hard sell. It means that the budgets going forward, 2021, 2022,etc. will become harder and harder to sell to a city that feels it’s not getting it’s money’s worth. The BOE needs to admit this reality and that’s when the ‘pearl clutching’ comes in.

A couple of observations: 1)Supt. Adamowski looks healthier and happier. It’s obvious the stress/pressure of job has been reduced as his term comes to a close in Norwalk. 2)The tipping point on ELLers was actually 20-25%, so we’re darn close with no money in sight from Hartford. 3) Based on comments from one board member, Norwalk has plenty of money. Not sure if Norwalkers realize what a wealthy enclave we live in. 4) Regarding tipping point – Supt. Adamowski mentioned Kendall School is 35% ELL. AND approx. 35% borderline ELL. For those of you without a calculator that’s 70% who can’t speak English or can barely speak English. 5) Maybe our elected leaders need to get off their asses and find support for our schools – Contrary to what some board members feel, money doesn’t grow on trees, and Norwalk isn’t a wealthy town with tons of money in the bank. 6) Norwalk Ed. will be privatizing short term substitute teachers – Considering there are some schools that subs refuse to go in (see above) they should start with those as a test case. 7)In summary — Overcrowded Middle schools (where historically we’ve had discipline issues) ELL crisis, which no one seems to think is a crisis. A board member who seems to think Norwalk is New Canaan financially. No help from Hartford who’s policies helped create current school situation. Tipping points on the horizon. But, that’s ok. As long as we install WiFi on buses all will be taken care. A wise old friend once told me “Hope is not a Plan” — I hope she was wrong.

So taxpayers of which a majority do not matriculate children through NPS are now expected to pick up an unsustainable ever increasing perennial budget increase to educate the children of illegal aliens. Fairness anyone?

With Minimum Budget Requirement laws, $14 million adjusted for inflation equates to a $700 million perpetuity for the city. That amount represents 4% of the grand list.

Hardly sustainable, but this isn’t the ticking time bomb that no one wants to discuss.

The states contribution to our Teachers Retirement fund has been eviscerated this year. Prior to this year the state had been contributing roughly $40 million a year into what was already considered one of the worst funded pension schemes in the country.

This year the state only put in $15 million.

This is what toll money is desperately needed for. The rainy day fund that is being thrown around right now would be like you or me taking a cash advance on our credit card, blowing half the money on a shopping spree and putting the other half in the bank where it earns no interest, while you are paying exorbitant interest on the credit card.