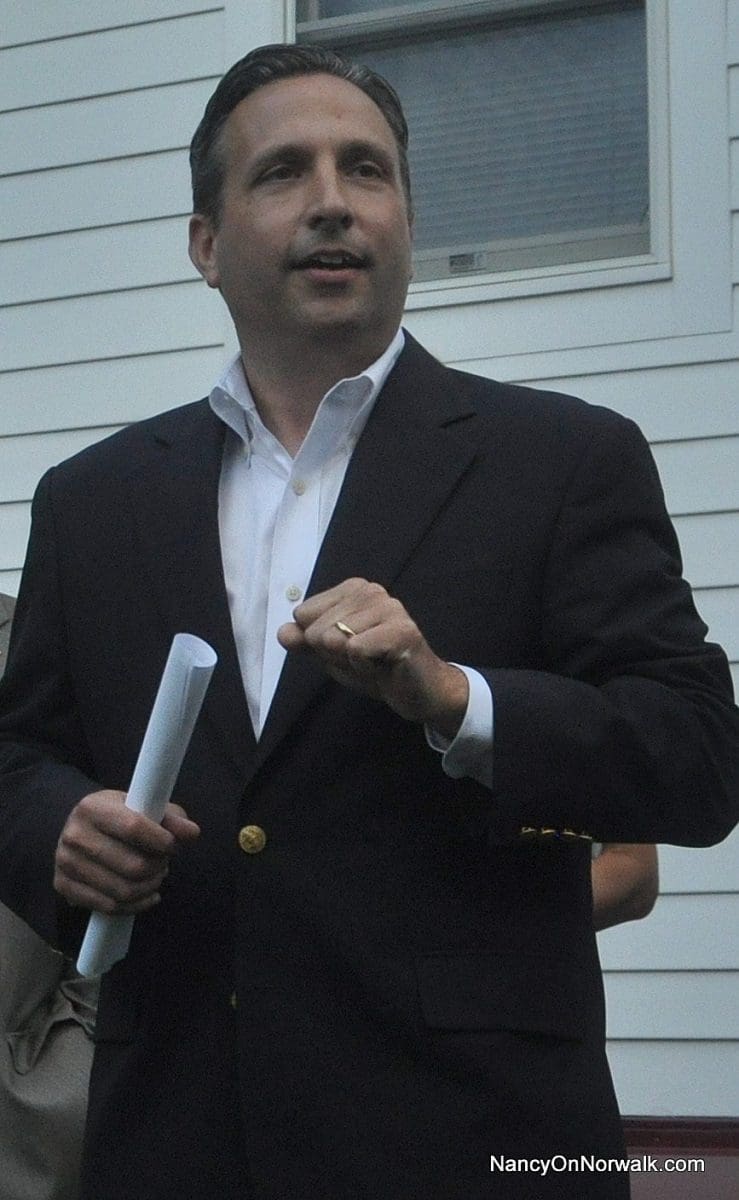 “Please keep in mind that this decision is ‘appealable’ by the State to the Connecticut Supreme Court and an appeal is expected,” Adamowski wrote to NancyOnNorwalk. “Nonetheless, today’s decision was a good step forward on the path to compel greater equity in education funding regardless of where a child lives and attends school. Norwalk’s efforts to develop equitable student-based funding that follows the child are consistent with this desired outcome and we hope it can contribute to a new model for future state funding formula.”

The 180-day deadline means the proposals must be submitted in the middle of the 2017 legislative session.

Duff, who is Majority Leader, released a statement:

“This is a moment not to be squandered, but an opportunity to put Connecticut on the cutting edge of educational greatness for generations in the future. It is well known that we have some of the best school districts in the country with amazing teachers all across the state. One of the many reasons families settle in Connecticut is for our educational opportunities. Yet, we face hurdles of a stubborn achievement gap and graduate some students who are neither prepared for a highly technical job market nor rigorous college work.

“The bottom line is children from all across the state should receive the necessary resources to ensure success. We must be creative, bold and strategic.

“Where children are not prepared for kindergarten we must roll out universal preschool. As a long-time supporter of family resource centers, Connecticut should bolster them in every school in our priority school districts. Children on free and reduced lunch, English language learners and special education students – groups that have historically needed our attention must be taken into account and funded based on need and not zip code.

“It is important that there are no winners or losers but a chance to fund education that will produce results and success in the classroom. Every child should have a chance to succeed.

“Change is never easy. Make no mistake, this will be hard and frustrating, but necessary. Before anything comes to a vote, we need to listen to people all over Connecticut. Their input and suggestions will be the most valuable.

“This issue is far too important to rush into, band aid or wax poetic. Our children’s future, their success and our state’s economy are counting on us to get it right.”

Many Norwalkers have called the state’s Educational Cost Sharing (ECS) formula unfair. Moukawsher said in his decision that the state hasn’t been using it.

“In place of the formula, since 2013-14, the legislature has simply adopted set dollar amounts of aid for each town,” Moukawsher said. “It did the same thing for several years before 2013-14 by overriding the formula and simply adopting the same numbers year after year. The state says it can do this because while you can’t tell why districts get what they get the state has still been giving much more money to property-poor towns than to property-rich towns.”

“Throughout 2016, the state has faced a bone-crushing fiscal crisis. …  The state knows there couldn’t be a worse time to move education money from struggling poor districts to rich districts. But the state did it anyway in May 2016 when, in the name of austerity, it amended the 2016-17 fiscal year budget.

“Under the changes adopted, education aid to the state’s poorest districts – with the exception of Danbury and Stamford – was cut by over $5.3 million:

“In the same bill, while significantly cutting funds for some wealthy districts – without formula or explanation – the state also protected education aid increases for other comparatively wealthy towns in the state amounting to over $5.1 million in extra money:

“The plaintiffs certainly think this is wrong, but the state says that $5 million isn’t much money … it broadcasts that the legislature does not feel bound to a principled division of education aid. Ifthis view of the state’s constitution won out, the legislature would be free to make today’s $5 million tomorrow’s $50 million and the next day’s $500 million.”

Mouskawsher, at the beginning of the decision, wrote:

“It is for the General Assembly to decide how much to spend on schools, but the state must at least deploy in its schools resources and standards that are rationally, substantially, and verifiably connected to teaching children. … many of our most important policies are so befuddled or misdirected as to be irrational. They lack real and visible links to things known to meet children’s needs.”

I believe that ECS change is inevitable. Even if the Attorney General appeals the decision to the Supreme Court, I believe the Legislature will be required to take action. Whenever that moment comes I plan to submit a proposal that is fair to all (and most especially to Norwalk). One avenue I am exploring is to link town ECS aid based on DRG rankings. The State already has an objective system in place to grade each town based on socioeconomic factors. DRG A is the least socioeconomically stressed while DRG I is the most socioeconomically stressed. Norwalk is in DRG H. I believe we should provide the highest per pupil ECS allocation to DRG I towns, then next to DRG H, and so on down to DRG A. I believe this system offers an objectively fair approach, meets the requirements of the court decision, and last but not least – benefits Norwalk in the most fair way possible. As a quid pro quo to the DRG A, B C, etc, towns who may stand to lose funding, I suggest they be compensated via mandate relief – such as the Minimum Budgetary Requirement, among others. While no doubt other proposals will come forward, I believe the DRG ranking approach is worthy of serious consideration.

On a parallel front, I believe the entire Norwalk delegation of five state reps + state senator should team together in a bipartisan fashion to promote a strategy. I also suggest we align ourselves with Stamford, which is also a DRG H town and also has been shortchanged by ECS. The more we work together the more impact we will have on the final bill (and more votes). Candidly our entire delegation has NOT worked together on this issue – but avoid having things like ego or party labels get in the way, I have no pride of authorship in this process. I am a freshman legislator and willing to work collaboratively and supportively with our more senior legislators. Let’s just get this done.

A moral victory to be sure, but I am skeptical. The same legislators (Fleichman et all.) that we testified in front of back in 2012 are still there. With Bridgeport (who gets the lion’s share of current ECS money) claiming they still need more, coupled with a financially ‘broke’ state, I don’t see how this moves the needle for Norwalk anytime soon.

The way Norwalk Schools get more funding is by growing the grand list with smart development. Everytime we give tax credits to developers who get into trouble or not, we’re adding more kids to the classroom but not generating any revenue to pay for it. It seems Norwalk has adopted the same winning strategy as the state! Sorry, just the way I see it.

Wow. West Hartford was given almost $1.5 million extra in the 2016 rejiggering, while Hartford lost $1 million.
How could our legislators in good conscience do that???
The NY Times has a set of graphs showing every district nationwide in grade level achievement x parental socioeconomic status. West Hartford is near the top (1.5 grade levels above average) while Hartford is down near the bottom (1.7 grade levels below average) with Detroit, St. Louis and Cleveland.
See “Money, Race and Success” by Rich, Cox & Bloch April 29, 2016 http://www.nytimes.com/interactive/2016/04/29/upshot/money-race-and-success-how-your-school-district-compares.html
The state’s defense argument that giving more money to poorer districts is not guaranteed to result in higher test scores is so disingenuous it doesn’t pass the straight-face test.

P.S. Norwalk is near the middle in the NY Times achievement x income graph at 0.1 above average. But, as we know from living here, some schools in Norwalk are better off than others.

I few thoughts. Why does it take 90 pages of paper to convey a decision?

Why do we bury our heads in the sand on the high presence of illegal immigrants in our city? What is the and the impact on our schools,taxes, and those student citizens who could use special attention?

We ought not forget that the Court’s ruling declared CT’s ECS system was convoluted and that even with a super-Democratic majority our Legislators for nearly 8 years have made noise but failed to create a fair and equitable system. Sen. Duff plays a leadership role here. ECS reform has been a familiar campaign theme but without the Clourt’s ruling ECS reform would remain just a “talking point” by our Legislators.
We ought give credit to former Mayor Alex Knopp for taking a lead role. It’s not often that a former Norwalk Mayor performs a distinguished public service outside our City. Qualifications in our elected officials do benefit our State and City. Let’s hope the BOE can invite Attorney Knopp to address the BOE in the near future regarding the full import of the Court’s decision. Finally Rep. Wilms is correct that Norwalk’s Legislators, lead by the Democratic majority, ought speak with one voice on ECS reform. Not just make campaign talk about “historic opportunities”. That’s just “campaign talk”. Our local Legislators have not led the ball here. Nor have “campaign visits” by hour Mayors to Haratford. But former Mayor Knopp as a lead attorney in the Yale assisted legal effort did and brings both honor and genuine commitment to our City and State. That distinguished service ought be celebrated by our City. Even though there are many miles to run before our Democratic run Legisalture creates acceptable ECS reform. Hopefully in our generation.

No where does Bob Duff speak about pulling for his constituency, his home district. The exerpt from Duff, talks about what is best for CT as a whole. Hey Bob, are you a CT Reg. or an elected rep. of Norwalk???

I know this will be controversial but I truly believe The difference in achievement from one school to the next Is more a function of family values and preparedness to learn than how much money is spent.

What we need is smart development. Not more subsidized housing. This is regardless of how the final ecs formula is written.

@Notaffiliated, what would you have us do about illegal immigrant children in our schools? The Supreme Court decided years ago that children have a right to attend school whether they’re in the USA legally or not.

If ‘past is prologue” the court mandated ECS and Special Ed funding issues will not be resolved by our part time State Legislators working with modest staff resources within 6 months. More likely is that several years of “judicial oversight” will be required with ECS and Special Ed as key issues in the upcoming elections. We should estimate the influence of CT public teacher Unions in objecting to the ruling. But one result ought be achievable fairly quickly – minimum per student education outlaysacross our various school districts and similarly for Special Ed students. At day’s end it’s likely that Norwalk’s ECS funding allotment will not suffer major change. But those in our major welfare cities will receive major funding outlays.