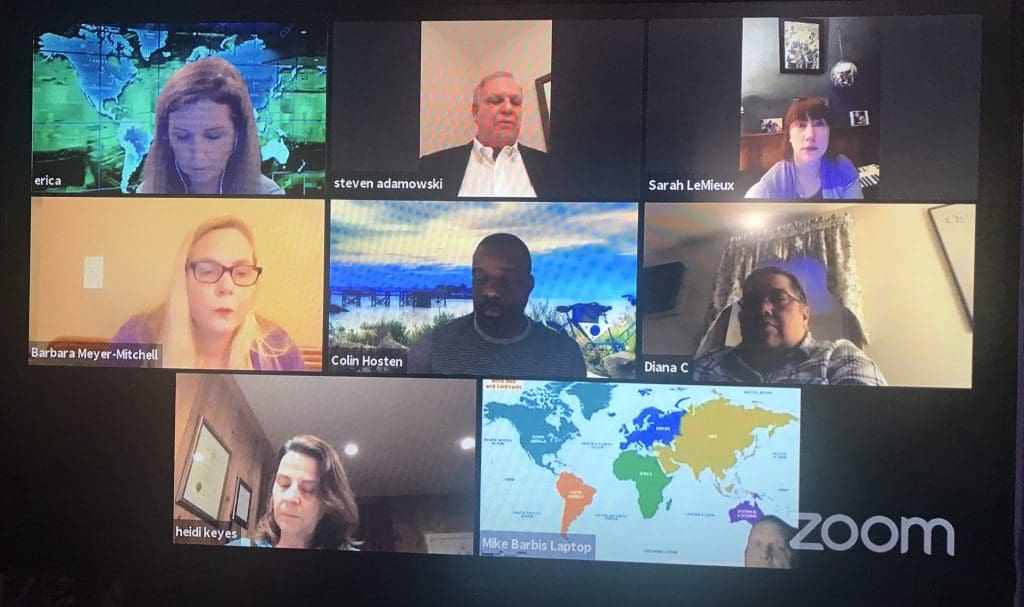 Tuesday’s Board of Education meeting was held virtually, via Zoom.

NORWALK, Conn. — Norwalk Public Schools would cut multiple positions to align its budget with the funding recommended by the City, in a series of recommendations presented Tuesday by Norwalk Superintendent of Schools Steven Adamowski.

Adamowski seeks to shift some positions to being grant funded, a move that would be aided by cutting four CISDs (Curriculum and Instruction Site Directors). The paraprofessionals staff would also be reduced, and one counselor eliminated at each middle school. A senior management (Chief) position would also be cut.

His reductions add up to $6.6 million, short of the $8.1 million needed; he urged Board of Education members to press the City for an additional $1.5 million to fund English Language Learner (ELL) programs.

The Common Council recently set a budget cap that would allow for a $9.9 million increase in funding over what was approved at the outset of 2019-20. While the Council characterized this as the largest education increase in Norwalk’s history, Adamowski said that if you deduct the $1.2 million special appropriation for ELL students that was authorized in December, then the increase doesn’t quite hit that mark.

Adamowski said he has not been able to find another school district or municipality that has handled a mid-year special appropriation the way Norwalk Chief Financial Officer Henry Dachowitz has, not including it in the following year’s budget and instead calling it part of the increase from 2019-20.

“While history may repeat itself, we have to be careful and learn from history and be careful not to make unrecoverable or do unrecoverable harm to our schools when dealing with this cut,” he said, referring to budget cuts made in 2011, under former Mayor Richard Moccia.

The recommended cuts do not directly impact instruction and “class size increases or cutting programs have been avoided,” he said.

Reducing the 10 CISDs to six, by allocating .6 full-time positions to each elementary school, would make $558,743 available for “innovative programs designed to close the achievement gap,” in alignment with the purpose of Alliance Grant funding, Adamowski said.

It’s likely that some individual School Governance Councils would use their student-based budget funding to allocate the other .4 for the positions. Smaller schools would share CISDs.

One general education paraprofessional would be reduced from the elementary schools that have more than two paras, saving $174,000, he said.

Cutting one counselor at each middle school would save $347,469.

“Norwalk has the lowest ratio of students to counselors in the middle grades of any school district,” he said.

The Dean of Students position would be reduced from one full-time employee to .4 FTE, saving $276,000.

Stipends to 24 department heads would be eliminated. The department heads currently get two periods off per day, and would have more time to teach, under this plan. This would cut 9.6 teaching positions, saving $1.1 million. First-year teachers might be “bumped out.”

Less high school teachers mean that freshmen would take seven classes instead of eight. While this would save $368,000, Adamowski recommended making the cut regardless of budgetary needs, as it would reduce stress on the freshmen.

The budget is aided by a new projection for insurance benefits that is $1.3 million lower than the one made in December and by a school bus contract that is $353,657 lower than expected.

“I think this points out the benefit and necessity of bidding these types of services in the public sector,” Adamowski said, of the buses. “We had very, very competitive response.”

NPS secured the Wilson Avenue bus depot in 2017 with a long-term lease that removed a need for a bus depot from future contract negotiations, saying this would allow for greater competition among bidders.

Veteran Board members Mike Barbis and Heidi Keyes immediately pushed back on cutting the CISDs, citing their experience with previous budget cuts. When assistant principals were cut, “it was really very difficult,” Barbis said.

At that point, Adamowski predicted that the SGCs would use their funding to keep the CISDs as full-time staff members.

“The first inclination was to just cut” American Sign Language, Adamowski said. “But if we, if we do, we really have to look at reducing the language requirement from three years of language to two years of language.”

Keyes agreed, saying it could have “a negative impact on the whole school environment and community.”

“As we listen to the superintendent’s recommendations, we need to remember that that’s what they are,” they’re the superintendent’s recommendations,” Board member Barbara Meyer-Mitchell said. “ And the beauty of discovering some of these suggestions Now earlier in the process is that we have time and we have an entire workshop, dedicated in two weeks to discussing this in more detail as a board, once we’ve had more time to investigate and look at options.”

Board member Diana Carpio said, “I definitely agree that we need to all sit down and discuss this because I myself, I’m not comfortable with cutting positions that are very important for the students, and the relationships that have been made with the students.”

(1)Shifting locally paid employees to grants could be illegal. I would hope the BoE looks into this very carefully.
(2) Adamowski gets additional money for staying 5 years in Norwalk. The dollar amount appears to be the best kept secret in Norwalk. How much is it? Does he bankrupt Norwalk and walk away with thousands upon thousands upon thousands?
(3) Central office staff is top heavy. How many people are there in Human Resources? How many curriculum administrators are there? Cuts should be made from staff NOT directly serving students.

Money is no longer growing on trees…A tax increase in this environment will not go over well. To the Board of Ed. — I think you need to learn how to do more with less.
Back to Basics — If that hurts a few, that’s too damn bad.

We are in the midst of a national crisis so let’s cut counselors the individuals who assist with the mental well being of our children. My child’s counselor has been in touch daily through this . I am outraged this would even
Be considered at a time like this.

Now is not the time to cut mental health professionals . Shame on you Adamowski .

I think we just need to have a zeroed out budget this year. Only fund what we need to keep the status quo this year and see what a new super wants next year. No new initiatives just leave everything alone. Fix the damage Dr. A caused and move on from there.

Sorry Dr. A and the BOE. Enough is enough. Maybe it’s time time to rethink things like the early start time program with its additional transportation costs as well as the sign language program or maybe some nonessential fat can be cut from the central office bureaucracy. With what is going on right now, any increase beyond what is required by the union contracts is simply unacceptable and unsustainable.