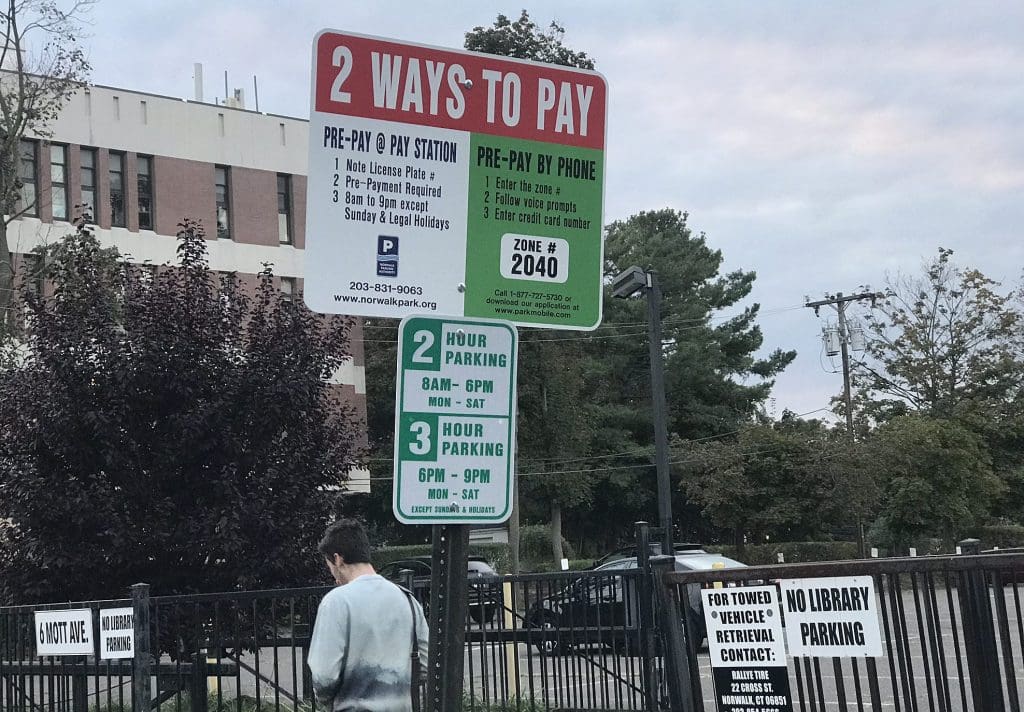 Mott Avenue in 2019, shortly after new parking signs and paystations were installed. The Al Madany Islamic Center opened on the corner of Mott and Byington Place in 2015.

NORWALK, Conn. — Norwalk is temporarily taking a break from issuing parking tickets on Mott Avenue on certain days, in response to a complaint from The Connecticut Chapter of the Council on American Islamic Relations (CAIR- CT).

In 2019, the Norwalk Parking Authority started to charge for parking on Mott Avenue adjacent to the Al Madany Islamic Center of Norwalk. According to a CAIR-CT news release, many worshipers attending Friday prayer services at the Center have since received parking tickets.

“Metered parking on a street adjacent to the mosque burdens the ability of Al Madany worshipers to attend services,” said Farhan Memon, Chairman of CAIR-CT in a letter to Mayor Harry Rilling. “Some congregants may be dissuaded from attending the mosque because they would have to pay a parking fee that they cannot afford. Others may not be willing or able physically to walk the distance from a free parking spot to the mosque. The imposition of a parking fee on this street, where none existed before 2019, is an impermissible burden on the First Amendment Right to Freedom of Religion of worshipers.”

In 2012, after its application to build a mosque on Fillow Street was denied, Al Madany sued Norwalk under the Religious Land Use and Institutionalized Persons Act (RLUIPA). The settlement led Al Madany to its current location across from Union Park in 2015.

The news release said it was a decision made by the Norwalk Parking Authority and the City of Norwalk. Although Memom spoke at Wednesday’s Parking Authority meeting, the issue was not discussed and no votes were taken.

“We’re thankful to the Mayor and to your staff, that they’ve agreed to pause and put a temporary moratorium on collecting fees during (worship times), and look forward to working with them to find a long term fix to this problem,” Memom said to the Parking Authority.

“Our goal to make sure we are being as supportive as possible for everyone living or visiting Norwalk,” said Assistant Parking Director James Emery, in an email to Memon. “Because of this…we will be suspending enforcement on Mott Avenue for people attending the Mosque for the holiday, and between the hours of 1pm and 2pm on Fridays. This will be in effect until we are able to fully review the request and provide you with a final response.”

The Al Madany Board issued a statement, expressing gratitude for the move.

“Worshippers of any faith should not have to incur any financial burden for attending their Sabbath or religious holidays,” it said. “We can fully appreciate that a permanent solution may take some planning, but entrust our wonderful city to do what is right for local religious organizations.”

Why did it take so long to rectify the obvious ? City leaders have more important duties ?

I applaud this sensible loosening of paid parking on Mott Street. I head every Friday around 1:15 to St. Paul’s where i teach a yoga class and observe the many cars parked and folks rushing into prayer at Al Madany and have felt bad that they have to pay to park when time is precious.

Parking spots during the week on Mott Street look very empty. Who wants to pay to park? I’m grateful the library has a parking lot (free $) now. Hoping that lasts!

I find parking on Mott Street or anywhere on our city streets not only unwelcoming, but when there is really no alternative to driving a car (because the streets are not all that safe for walking and biking, nor do we support a highly-functional public transportation system in Norwalk), I find paying to park a form of extortion. I suggest the city waive parking fees throughout the city. It may bring income for the city, but it can be a deal-breaker for the rest of us.

It’s just the right thing to do. Complements to whomever had the good sense to be sympathetic to those choosing to worship without the fear of a ticket

But demand is not there yet.

This is quite possibly due to the draconian ticket happy parking practices employed by the Norwalk Parking Authority. The NPA is very efficient at driving prospective retail shoppers from our local retail merchants. Many of the merchants have been stating this for years.

I wish our CC reps would weigh in on this.

@ Michael. The mayor claims the businesses wanted the paid parking. The town should be free unless its a private lot. We pay taxes here to maintain the roads. The parking company waits for the buzzer to give you a ticket