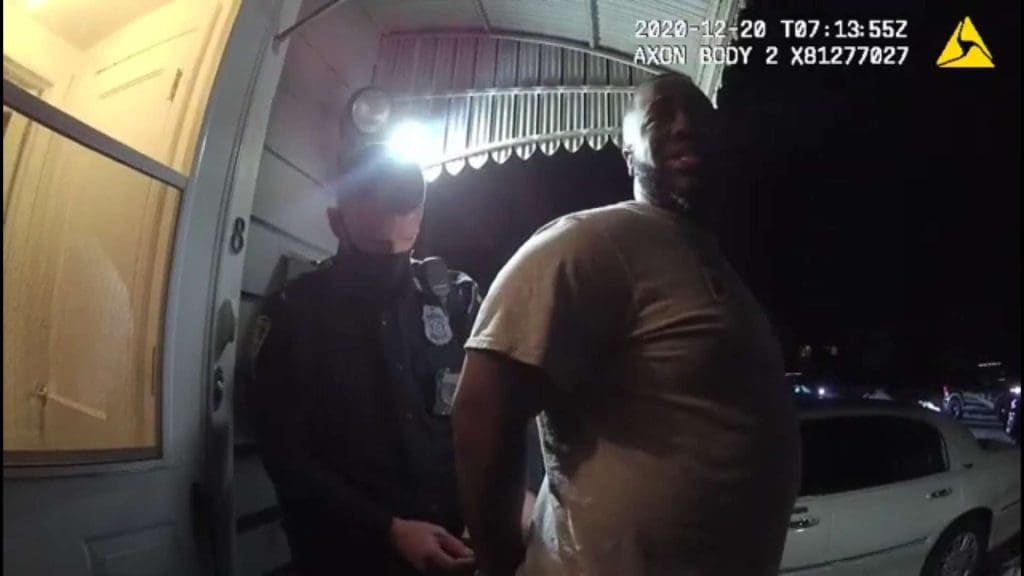 NORWALK, Conn. — A woman who has accused Common Council member Kadeem Roberts of assault also alleged that he was her ex-boyfriend and was stalking her.

Roberts was arrested Dec. 20 and charged with Assault in the Third Degree, Disorderly Conduct, and Interfering with a 911 call. NancyOnNorwalk obtained his arrest report Tuesday through a Freedom of Information Act request. NoN also has body cam video of the arrest; it was received through an FOI request in mid-January.

Roberts is a Democrat representing District A. Attorney Darnell Crosland, representing Roberts, said on Dec. 21 that “Roberts received a text from the complaining witness at around 1:12am asking him to pick her up from a party because she was drunk. Mr. Roberts obliged and picked her up.  When he dropped her off, she refused to exit the car due to her intoxication…. Mr. Roberts never interfered with any 911 calls nor did he assault this woman.”

The arrest report, written by Norwalk Police Officer Ramon Tejada, quotes the “victim” as saying she dated Roberts from April to October, while she and her husband were “on a break.” The couple is back together “but Roberts continues to stalk her,” the account goes. “She claimed to have had prior incidents with Roberts, but has not reported him to the Police due to his status.”

The woman stated that she had been at a friend’s house drinking when Roberts texted her, the arrest report states. She attempted to send her location information to her husband but mistakenly sent it to Roberts, then told him she didn’t need a ride. He arrived anyway, Tejada reports her as saying.

She was surprised but “got in his car because her friend was intoxicated and she needed a ride home,” the account goes. She got in the back seat, said she didn’t want to talk but a short distance down the road he stopped and insisted she get in the front. They argued “because Roberts wants her to go back with him, but when she told him that she no longer wants to pursue anything with him Roberts became aggressive,” it states.

When they got to her house, he threw her belongings out of the car, Tejada reports her as saying. He reports that there were objects in the street. She alleged that Roberts had “mushed” her face with an open hand, poked her eye and yanked her hair; Tejada reports she was scratched, and had redness on her chest and scalp.

She also alleged that she had tried to call a friend for help and Roberts had grabbed her phone out of her hand, then she tried to get his phone from the car but he forcibly took it from her, the report states. She claimed that she’d locked herself in his car and drove it up the road a bit, then walked back.

“Rep. Roberts wants to be clear, no one is above the law, and he understands and appreciates the process.  As a political leader he leads by example, and that means if there is an allegation against him, he wants to cooperate with the process to a resolve and he would ask the same of any Norwalker.

“Our position is that there was a rush to judgment in this case and the matter will be dismissed.  Rep. Robert’s main focus is the people and the city of Norwalk.  He has been occupied in protecting his constituents during this worldwide pandemic and he plans on focusing solely on the betterment of the people of Norwalk in the days to come.” 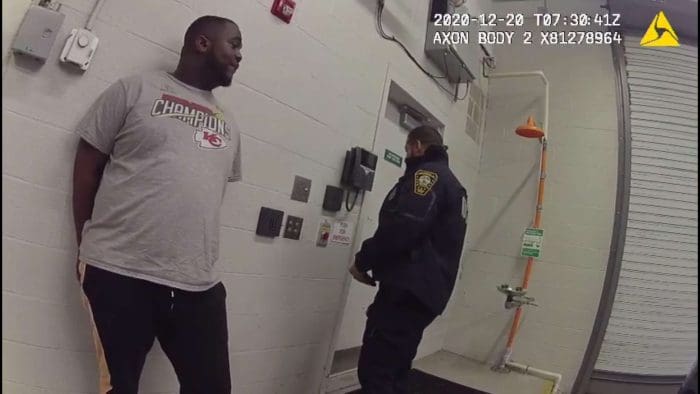 Common Council member Kadeem Roberts (D-District A) on Dec. 20 makes his way to the booking area in Norwalk Police headquarters. The image is from body cam video.

A recording of the police dispatch call, recorded by NancyOnNorwalk contributor Harold F. Cobin, shows that the complainant, who was not the alleged victim, told police that Roberts had come into the home and tried to take a cell phone. Roberts left the residence and then returned and was assaulting the victim, the complainant said.

The bodycam videos show Roberts making statements consistent with the story relayed by Crosland. He had “picked the young lady up” after she called him while “doing too much,” he says to the officer at his door. “My phone went off and the lady called me, she was upset. I said, ‘get out of my car,’ she left and went in the house. That’s all.”

He appears to be surprised and confused about being put in handcuffs.

“You’re being detained,” an officer explains.

“This is crazy,” he says multiple times, then suggesting the officers call Norwalk Police Chief Thomas Kulhawik because, “He’ll know exactly who I am.”

“I’ve never been arrested a day in my life,” he says, more than once. Roberts is cooperative, although resistant about squeezing his big frame into the back of a police patrol car, warning that it will make him “paranoid” and he will “freak out.” Officers promise to play music in the car.

Roberts’ mother helps him get in the car, and once inside, he tells her, “this is me being a person picking people up.” She asks if she’s dating the “girl” and he denies it.

An officer driving him to the station tells him to stay calm, that he’s not guilty “until proven,” and “the less you say the better.”

His ride in the car was uneventful.

This is a sad story. As one of the representatives of the Wall Street area Kadeem as been responsive and professional.

He has attended Wall Street Neighborhood Association meetings. He has provided guidance, followed through, and he genuinely seems to care.

For Kadeem’s sake, and the neighborhood, I hope this is able to be resolved.

So anyone can just “allege” something about anyone, and you get treated like a criminal and you’re guilty until proven innocent? Is this what I’m witnessing here?

I am not witness to what happened but what is the need to post the police cam videos? He was very cooperative and the police were professional. Why pry into his business? I am sure he is embarassed enough. Surprised Nancy

Interesting video. It shows the uncertain challenges NPD has to deal with which they handled professionally. Roberts seems like a good guy, I hope his infractions aren’t too bad and the victim is ok. If we’re listening to Method man in the patrol car go with Release Yo’ Delf from that album