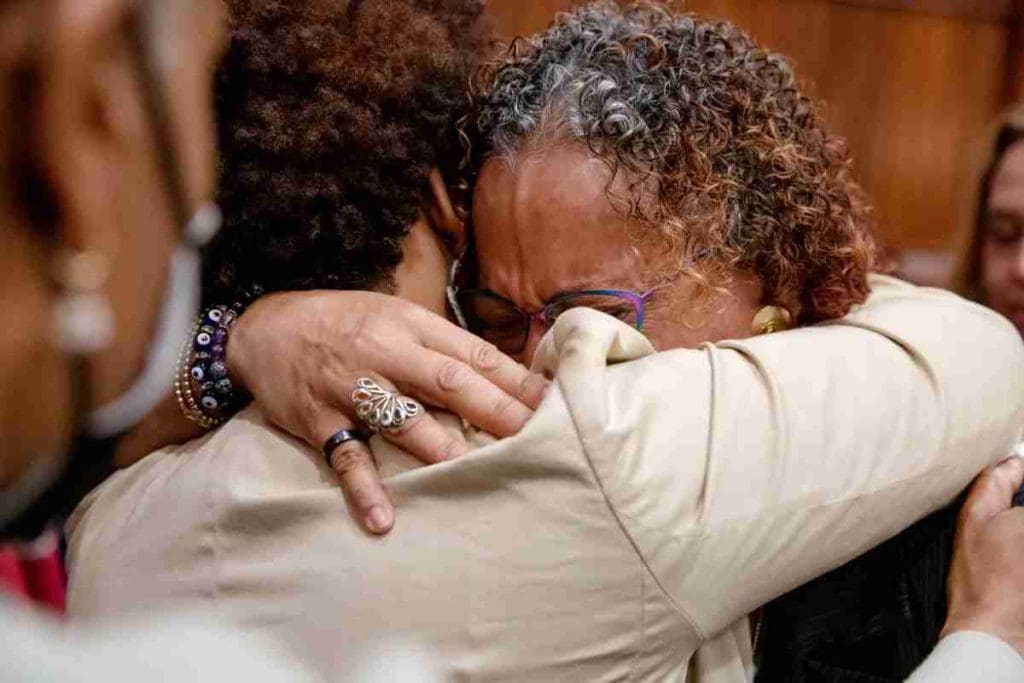 Without prodding or plan, legislators glided to the corner of the state’s gilded-age House chamber, where a tired Black woman stood talking Wednesday about America’s original sin and its second day of independence — Juneteenth, a holiday not yet recognized in Connecticut.

Rep. Toni Walker, a child of the South and citizen of New Haven, shared childhood stories of hiding from the Ku Klux Klan, of pets killed and crosses burned in retribution for her father’s voter registration efforts, of the everyday indignities of denied access to a whites-only bathroom.

“How far have we come?” Walker asked, her voice neither plaintive nor angry. “How are our families thriving?”

There was no question how the debate about Senate Bill 350, which the Senate passed 35-1 the previous day, would end: The House would vote nearly unanimously (142-1) to designate Juneteenth Independence Day, the end of enslavement on June 19, 1865, as a legal holiday in Connecticut.

The sole negative vote came from Rep. Gale Mastrofrancesco, R-Wolcott, who objected to a holiday that might eventually mean another day off for state employees.

But an anticipated moment of celebration on the session’s final day was souring. The debate had gone sideways, not unlike a holiday dinner where race is broached, turned by a what-did-they-just-say moment.

Rep. Kimberly Fiorello, R-Greenwich, a Korean immigrant and unabashed believer in the American experiment, enthusiastically embraced what Juneteenth symbolizes, promising her vote. But she put a gloss — a “whitewash,” a Black colleague said — on how America got past slavery and where it stands today on questions of race and opportunity. 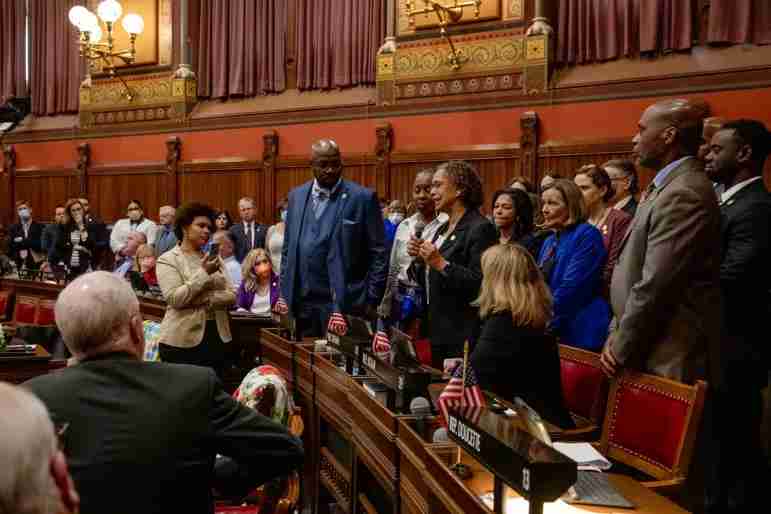 Legislators gathered behind Rep. Toni Walker, D-New Haven, in a show of support as she explained the significance of Juneteenth. (Yehyun Kim, CTMirror.org)

One after another, the Black lawmakers who spoke before Fiorello cast Juneteenth as serving multiple purposes. It marked the end of their ancestor’s status in the U.S. Constitution as three-fifths of a human being. It is a celebration of Black resilience and a reminder of the racial disparities that remain in educational and wealth attainment, how they fare in the courts and in the housing market.

“In so many ways, the shackles are still on our feet. The shackles still remain around our necks. And I hope that we take an opportunity to be cognizant of that,” said Rep. Robyn Porter, D-New Haven.

“American history is Black history, and Black history is American history. One is not able to be present without the other,” said Rep. Corey Paris, D-Stamford. “My great-great grandfather beaten, his father killed. Family members sold from one plantation to another, never understanding the true identity of their culture, of their existence. There is no price that you can put on the lives lost, on the bloodshed, on the history unknown. And that is why Juneteenth is so important.”

Fiorello saw Juneteenth as an American story, not a Black one. She arrived in America as a 10-year-old and graduated from Harvard as a young adult, then settled in one of the nation’s wealthiest ZIP codes as a wife and mother. It is time, she said, to set aside the lens of race.

Juneteenth was for all Americans, a celebration of the nation’s inevitable arrival at equality and freedom, she said.

Fiorello spoke twice, the second time to contradict the Black lawmakers on their view of history and their opinion that racial disparities remain.

Unlike her Black colleagues, Fiorello also saw glimmers of America’s early promise in the compromise struck in 1787 over how to count slaves in the census that would apportion seats, and therefore political power, in the new House of Representatives. 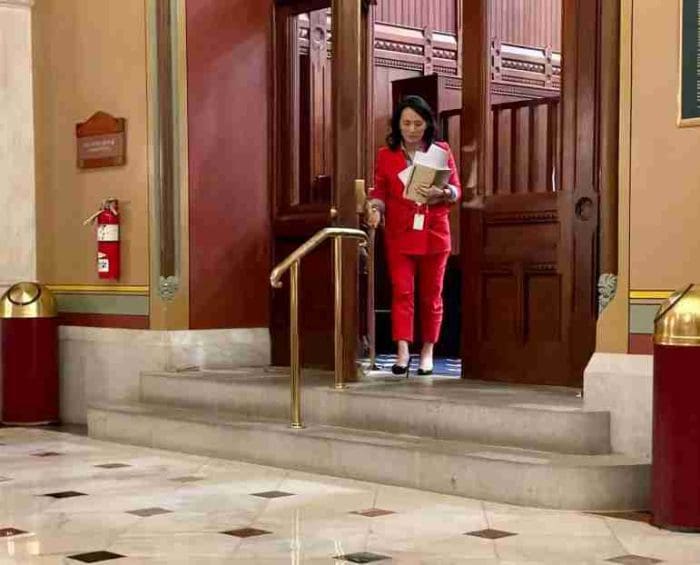 Rep. Kimberly Fiorello, R-Greenwich, voted to designate Juneteenth as a holiday but clashed with Black lawmakers over racial history. (CTMirror.org)

Southern slave states wanted to count each slave as a person for purposes of the census. Northern states objected, then consented to counting a slave as three-fifths of a person in the census.

“The three-fifths compromise is a compromise in favor towards freedom,” Fiorello said. “The wonderful thing about the debate that happened [in 1787] is that the slaveholding states actually recognize what they claimed to be things that they owned, suddenly, they wanted to count them as a full human being.”

Fiorello would say later she resists seeing issues through the construct of race.

Off the floor, House Speaker Matt Ritter was in his office with Walker, who was still fatigued from her job of presenting and defending a budget as the Appropriations co-chair. Ritter suggested Walker return to the floor.

“You don’t want to end that debate feeling like even though you won the vote, you lost the debate,” Ritter said.

So Walker hurried to her desk in the corner, where Porter was speaking for a second time, challenging Fiorello’s understanding of the “The Three-Fifths Compromise.”

Lawmakers had already started to gather in the corner, a silent show of support. Ritter returned to the dais to listen to Walker.

Walker said it was time to recognize Juneteenth as a holiday, one that once was Black America’s off-the-books holiday. She learned of it from her father, who grew up in Texas. It was in Galveston, Texas where federal troops arrived in June of 1865, two years after emancipation, to free the last enslaved Americans.

“Juneteenth was one day that we want to have on the record as a celebration of independence from slavery,” Walker said.

She tread lightly on Fiorello’s insistence that disparities were disconnected from discrimination, while not ignoring it.

“Let’s honor it, wear it, talk about it and move on, so that we never have an issue where somebody is trying to define us for us,” Walker said. “We can define ourselves.”

By the time she finished, her colleagues lined the back and side of the chamber. When the vote was tallied, they came for hugs.

This is terrific news and about time. Thank you CT legislature, Rep. Walker, Rep. Simms and the Black and Puerto Rican Caucus for shining a light on this important day. Juneteenth meaning: http://www.vox.com

For additional insight about Rep. Fiorello’s elitist view of life, check out her statements about housing during the public hearing on Transit Oriented Development this session.

Yogi, I’m having Deja Vous all over again.

This argument – held within the core beehive of Connecticut’s political corruption, brings me back to one of the micro-arguments in the great film – Spike Lee’s “Do the Right Thing”.

It’s “street smarts” personified, with one of my favorite characters in the film – Sweet Dick Willie (portrayed superbly by the late Robin Harris), schooling his friends Coconut Sid & ML – here is the youtube clip:

How indeed? An under-reported story locally was about the star turn Norwalk’s own Chantel Anderson made on the TV Show – Bar Rescue. Took the initiative, learned a skill, turned it into a business. That’s the winning formula.

Say what you will about Spike, but in 1999, the film was deemed “culturally, historically, or aesthetically significant” by the Library of Congress, and was selected for preservation in the National Film registry.

CT’s Democratic leaders are not strong on our history. There’s an opportunity to honor the lives of CT volunteers who answered the call from Pres Lincoln to defend the Union from the Confederacy run by Democrats intent on seceding with its millions of slaves from the Union

If CT’s Democratic leaders wanted to demonstrate their concern over the well being of our 3 largest cities home to most CT Blacks they could improve their shabby schools, encourage more CT Black youngsters to secure college degrees and encourage major business to bring good jobs to these 3 major cities,. But CT’s leaders have more important issues to focus upon. So the nations’ wealthiest State continues to harbor 3 of the natin’s most impoverished cities.To all of our embarrassment.

If we’re going to fill in the holes in our CT we ought begin with our Native Peoples who were brutally destroyed by tens and tens of thousands by our early colonists. And then follow with CT citizens who “answered the call” in the RevolutionaryWar, War of 1812, Civil War, WWI, WWII, Korea, Vietnam, etc. That’s the history we ought focus upon. For a small populated State our CT made an outside contribution in our internal and external Wars and industrial achievements. Especially in WWII when our 3 major cities made outside contributions collectively known as the Arsenal of Democracy with Pratt & Whitney, Electric Boat known round the world. CT certainly has a lot to be proud of including Yale – one of the world’s premier Universities, Medical Schools and Cancer Hospitals (Smilow).

Those who want to beat up America for its slavery past might want to ask if our past is more notorious than other great nations. And why America remains the worlds premier destination of new immigrants. And why few Americans retire in other countries or emmgiate elsewhere to secure better lives. And why African Americans have achieved greater success in America than anywhere else in the world. Tens of thousands of Africans come to the US annually to study in our colleges. Few Americans go to Africa to study. Indeed, few Americans go to Africa to visit ! Maybe we have something really good going here for all sorts of peoples. Go visit the Southern Border if one has doubts.