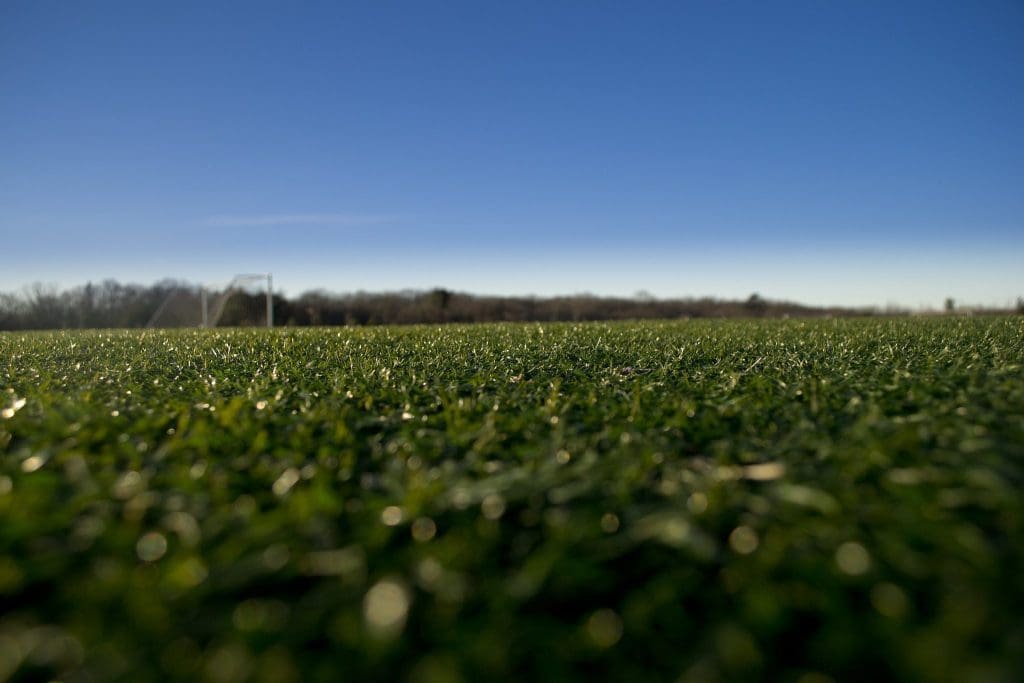 Artifical turf at Skyline Park in Brookline, Mass., which opened in 2008. Norwalk will install CoolPlay at West Rocks Middle School, not a topping of crumb rubber, Director of Recreation and Parks Nick Roberts said. (Photo by Flickr user Josh Graciano.)

NORWALK, Conn. — Norwalk is set to install artificial turf on the soccer field being built at West Rocks Middle School, even while expressing uncertainty about claims that there may be health issues associated with the plastic grass.

Artificial turf gives extended playing time into the night and a longer playing season, Norwalk Director of Recreation and Parks Nick Roberts said to Common Council members Tuesday. “A number of studies have been conducted in the U.S. and other countries that are consistent in their conclusions that is a low potential risk of chemical exposure from crumb rubber artificial turf fields.”

Facing questioning from two Council members, Roberts conceded that studies are “not 100 percent conclusive” that the health hazard is low. A federal study is under peer review and the Health Department will be monitoring the results, with the possibility that “adjustments” may be needed.

The Council voted 13-1-0 to approve the contract, with Council member Lisa Shanahan (D-District E) as the dissenting vote.

“It is hard to be the only council person to vote against something as popular as sports fields,” Shanahan wrote Thursday. “Both of my daughters were high school athletes and I too have played sports my entire life.  I absolutely support athletic fields for children as sports programs are critical to good development and health of children.  That said, in my opinion, synthetic and artificial turf fields pose health risks to children and environmental risks to our communities that have not been fully assessed and for that reason I had to vote my conscience.”

Artificial turf has evolved to include recycled tires

“Synthetic, or artificial, turf has been used since the 1960s, gaining popularity in the 1970s and 1980s with most of its use in professional sports arenas. These older fields were generally comprised of hard mats of nylon grass and many athletes using these fields complained that the surface was harder than grass and caused more injuries,” the Connecticut Department of Public Health explains on its website.

“Newer artificial turf fields were developed to simulate natural grass fields by using infill material to make the fields softer and by adding plastic grass on the surface,” it continues. “Some fields use infill material made from ground-up tires, called ‘crumb rubber’, and this type of infill has caused concern about potential chemical releases to the environment.”

DPH states that studies do not show an elevated health risk from playing on turf fields, but, “There is still uncertainty, however, and additional investigation is warranted.”

The Council Recreation and Parks Committee voted on July 8 to advance a $443,088 contract with Field Turf USA to the full Council for approval, for the turf field at the West Rocks soccer complex. The Council instead approved a $170,024 with TD & Sons.

The lower bid had been sent to West Rocks itself and was discovered by the purchasing department before the Council meeting, Roberts explained Tuesday.

Just over $1 million in expenditures were was authorized for the developing complex. It’s the home of one of the city’s largest programs and is much needed, Roberts said.

More than 1,000 fields are constructed every year nationwide and one source states that 80 percent of them use a rubber base, Roberts said. In 2015, the Connecticut Department of Health did a study that said, the “risk assessments were not elevated into a range of health concerns for cancer or non-cancer influence for children or adults at the outdoor fields,” he continued.

It’s not 100 percent certain there are no risks “because there’s uncertainties with the studies themselves,” Roberts said.

One is being conducted and monitored by the U.S. Environmental Protection Agency (EPA) and the U.S. Consumer Product Safety Commission and is under peer review, he said. Norwalk Director of Health Deanna D’Amore is aware of it and is also waiting for the findings, “so based upon that study, we will take appropriate action if need be.”

Based on the report, Norwalk isn’t using crumb rubber but is using CoolPlay, “which reduces the temperature of the field by 40 degrees,” Roberts said. It’s a base of sand and rubber with a thermoplastic elastomer (TPE) topping that “meets or exceeds the stringent EN71 requirement to use for validating the safety of children children’s toys and materials” and “requires no additional maintenance.”

People have asked why a cork product can’t be used but cork floats in the rain, adding maintenance costs, Roberts said. CoolPlay has a life expectancy of 10 to 12 years but cork or coconut has eight to 10 years.

“We’re using an alternative product,” Roberts said. “We’re using a product that reduces the heat, and we are aware of some of the research that’s out there and modeling it. And we’ll adjust as needed.”

Shanahan asked why Norwalk couldn’t use “a natural product, like grass.”

“There are some serious concerns about some of the plastic heat that comes off that you’ve mentioned, but also some of the fumes that comes off these plastic products that … the kids are running on,” she said. “There has been a lot of research that calls this into question. So I’m quite concerned about that and also the possible impact on our water supplies and other places.”

Grass dies in the winter locally, so you don’t get the playability, Roberts replied.

“We have a number of programs and kids that play a short time frame,” he said. “So the fields get compacted and there’s additional maintenance requirements as opposed to a natural turf field, which you can use during inclement weather, you can play it longer, until nine o’clock at night with lights, you can play it longer into the season into the colder months because you’re not worried about grass growing.”

Again, studies have been inconclusive, he said.

“So if we put it down, and we find out that it’s not good for people’s health, we’re prepared to pull it out?” she asked.

“I honestly don’t think that we’re going to get to that point,” Roberts said. “This product has been in use for 20 years. Plus, it’s being used at all levels, from professional franchises to college universities.”

Crumb rubber is under the carpet of plastic and it’s common to see crumb rubber come up when soccer players slide on the field, she said. While the kids won’t be doing slide tackles, their cleats may kick up crumb rubber, she said, asking if the kids will have it stuck to their shin guards or legs.

“You will see some of that but it’s not going to be as bad as some of the other fields that you’ve seen, and again, this would be our seventh turf field that we’re doing in the city,” Roberts said.

She asked if younger kids will be able to put it in their mouths.

“Yes, when you rub your hand on it, you will get some of that in there,” he said. The studies didn’t cite direct ingestion versus direct contact, “so those are some of the variables you talk about in the study and that’s why it’s not 100 percent conclusive that it doesn’t prevent any elevated risk.”

“Are we prepared to really remedy this? If it’s a health hazard, I’m concerned as well.”

“I believe the cost to do replacement of the infill is about $90,000,” Roberts said. “…If we have to replace that it is going to be a costly item. But if that’s what the study dictates, you will have to do so.”

All of Norwalk’s existing turf fields use a sand base with a crown rubber top, Roberts said at the July 8 Committee meeting. He differentiated that from CoolPlay by explaining, “you’re not even going to get the exposure to the crumb rubber anymore.”

“This is a little bit different, this is bigger, this is heavier, this is a plastic base as opposed to rubber,” he said. “So we did hear that concerns. We are trying a new product we are trying to sort of you know, utilize technology and advances in that product.”

If “adjustments” are needed, that would be “installation, maintenance or construction,” he said.

Turf fields always inspire pushback and concerns, John Kydes (D-District C) said. What “really resonated with me is when I heard that a lot of the Ivy League medical colleges are installing these fields. And I mean that tells you something.”

A ‘science experiment on children’

“I am not a scientist but from the reading that I have done on this topic, important questions have been raised about the toxicity of the materials used in these fields,” Shanahan said in her Thursday email. “Some of these materials heat up in the sun and apparently are released in a gaseous form exposing our children to chemicals as they play on hot days.   The turf fields themselves are sometimes much hotter than the outside air, posing an additional danger to children.  Some of the crumb rubber leaves the fields and finds its way into our water systems potentially bringing with it cancerous chemicals.  There is so much not yet known about the dangers these fields pose and I think conducting a ‘science experiment’ with our own children as subjects on these playing fields is not supportable.

She provided a pamphlet that Diane Lauricella mentioned as a public speaker at Tuesday’s meeting. In it, Environment and Human Health, Inc. (EHHI) lists “12 reasons why turf fields pose a health risk.”

“I have also read other reports referencing the fact that the EPA is currently studying these fields but that the jury is out as to toxicity safety,” Shanahan wrote. “I asked Mr. Roberts at our meeting, if the science were to show elevated risks to our children with the use of these fields, are we prepared to rip up the fields and lay down safer alternatives?  He demurred.  So, at this time, I cannot support the use of turf fields.”

She concluded, “I remain hopeful that the studies of these artificial fields prove them to be safe.”

Only in this city are there that many questions/concerns about a turf field.
Amazing.
And people wonder why our teams routinely get beaten by our neighboring schools.
There needs to be much more of these fields in Norwalk.

The city could have bought the land across the street from the Diocese for parking, but instead we’re getting more cluster homes there in a flood zone. Enjoy your new soccer field and parking on the sidewalks and curbs up and down Aiken street.

Thanks, Lisa, for your voice and your vote. The science isn’t settled and it’s important to keep our focus on health issues associated with this turf, and I really appreciate you taking this on. I am a little surprised that there is no discussion about athletes’ increased leg and knee injuries when playing on artificial turf… or has that issue been ‘solved’ with newer turf?

Glad to see this moving forward and again I wish Nick Roberts all the best in his new position. It is my hope that Lisa Shanahan sticks to her principles on close votes when she may be pressured by fellow Democrats. It’s easier to vote your consciouse when the tally is 13-1.

I picked up today’s paper and read that Donald Trump is still our President. Nancy Pelosi is still Speaker of the House and and Bill DeBlasio is Mayor of New York. I immediately knew who today’s Great American Hero would be. Elijah Craig, The Father of Bourbon!! Elijah was a Baptist Minister who knew how to handle stress back in the 1700s. So, a toast to Elijah for being a Great American innovator. Because it matters!

Plastic is never a good option.

Wonderful bourbon and does not drink like a high proof! Chears!

what happened to using flexi-pave, Norwalk used it for the courthouse resurfacing