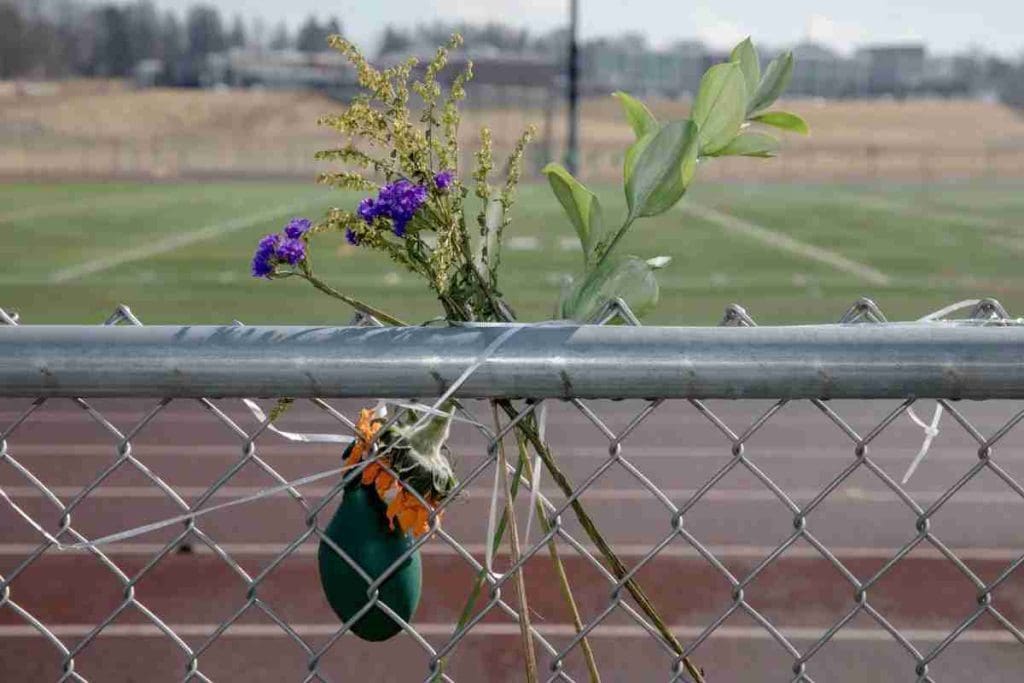 Balloons with messages and flowers hang at the Enfield High School football field for Jaylene Gonzalez, a 14-year-old freshman, who died after being hit by a truck while walking on Route 140 after school. Gonzalez is one of at least 16 pedestrians killed by a vehicle on Connecticut roads as of March 14. (Yehyun Kim, CTMirror.org)

Jesse Robert Pincince “looked down for a second” to check his phone while driving along North Road in East Windsor on the afternoon of March 6 when he heard a loud “thump” against his truck, he told police.

Jaylene Gonzalez, a 14-year-old freshman at Enfield High School, had been walking with a friend along the east side of North Road or Route 140, which doesn’t have sidewalks, when “this truck” came out of nowhere and hit her, according to the East Windsor police report.

The teenage soccer player became yet another pedestrian killed by a vehicle this year, and the circumstances — a larger vehicle, potentially a distracted driver — are becoming more common, experts say.

With at least 16 pedestrian deaths on Connecticut roads as of March 14, according to the Connecticut Transportation Safety Research Center, 2022 could become one of the more deadly years for pedestrians in the state, continuing a troubling trend.

In the past 10 years, the number of pedestrians struck and killed by cars has more than doubled, due in part to a combination of larger and heavier cars, higher speeds and distracted drivers. 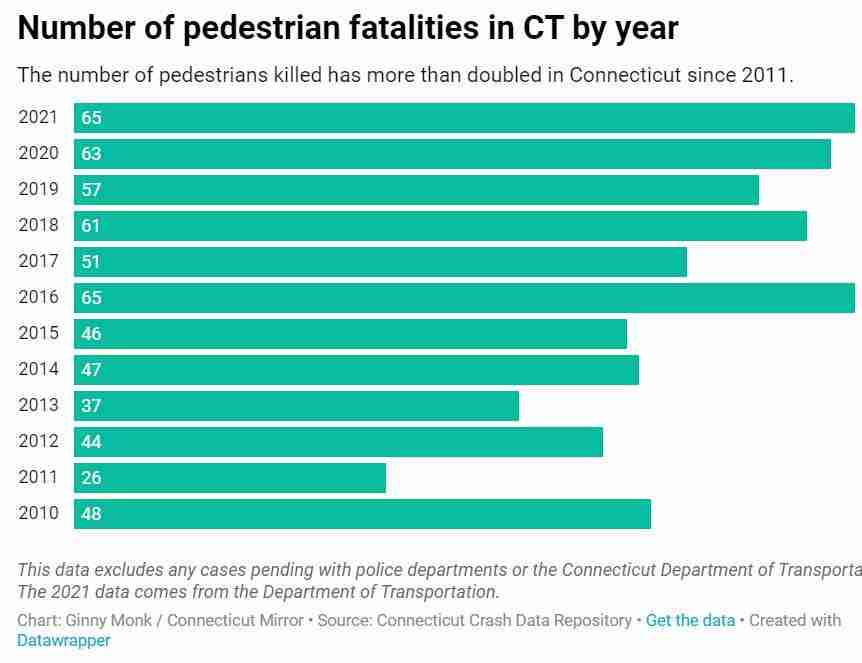 “In 2011, there were 26 pedestrians killed on our roads, and last year (2020) we had 65 deaths, and that includes a portion of the spring when hardly anybody was driving,” said state Department of Transportation Deputy Commissioner Garrett Eucalitto.

The number of deaths is still climbing. This Jan. 1, just minutes into 2022, a 51-year-old Windsor man named Michael Brown was killed while walking on Albany Avenue in Hartford.

DOT officials and advocates for improving roads for biking and walking agree on the causes: People are driving larger and heavier vehicles such as SUVs, which cause more injuries; people are driving those cars faster and more recklessly because, especially during the pandemic, there has been less fear of being pulled over; and many of the state’s roads, particularly in urban areas, aren’t designed for increased pedestrian traffic.

If that car is an SUV or a truck, much more likely now than 10 years ago, the injuries are likely worse.

“Smaller sedans were designed [so that] if a pedestrian was hit, they would roll up over the hood and roll off the car to the side,” Eucalitto said. “Now with the vehicles becoming larger, the pedestrians are going underneath the vehicles, and that is just leading to a huge increase in pedestrian fatalities.”

Gonzalez was thrown more than 60 feet by the impact with Pincince’s truck. She was taken to the hospital but died within hours.

Pincince is facing multiple charges, including second-degree manslaughter and negligent homicide with a motor vehicle. He is being held on $200,000 bail. 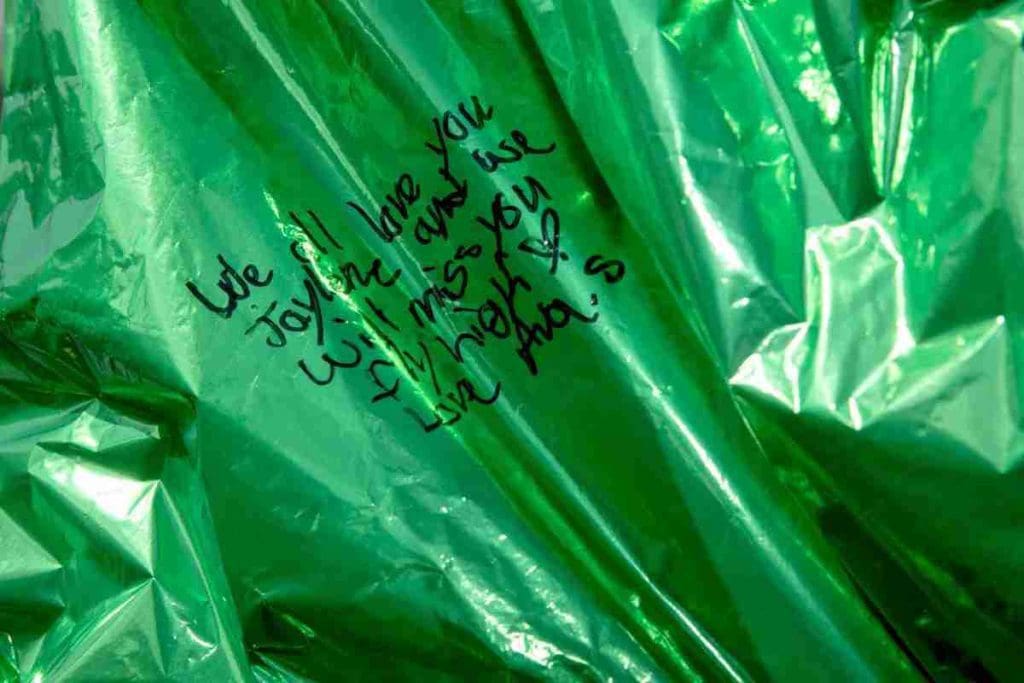 A balloon hangs at the Enfield High School football field for Jaylene Gonzalez, who was a soccer player at the school. “Soccer will never be the same without you. We love and miss you so much,” was written on another balloon. (Yehyun Kim, CTMirror.org)

At a recent Enfield Board of Education meeting, Superintendent Christopher Drezek read a statement from Karla Gonzalez, Jaylene’s mother, in which she thanked the community for its outpouring of support, especially since the family hadn’t been in Enfield very long.

“She loved playing soccer for Enfield; the team made this place a home for her,” the statement said. “I know our family has been quiet through all of this, but we are just having such a hard time.”

For advocates, the increase in pedestrian and bicycle deaths is also partially due to state and federal transportation officials’ bias toward being “car-centric,” spending massive amounts on repaving or widening roads to accommodate more vehicles.

“Historically, they are very car-centric agencies, and particularly in our cities, the way streets are laid out is also car-centric and not really catered to the people who live in them,” said Dice Oh, a member of People Friendly Stamford. 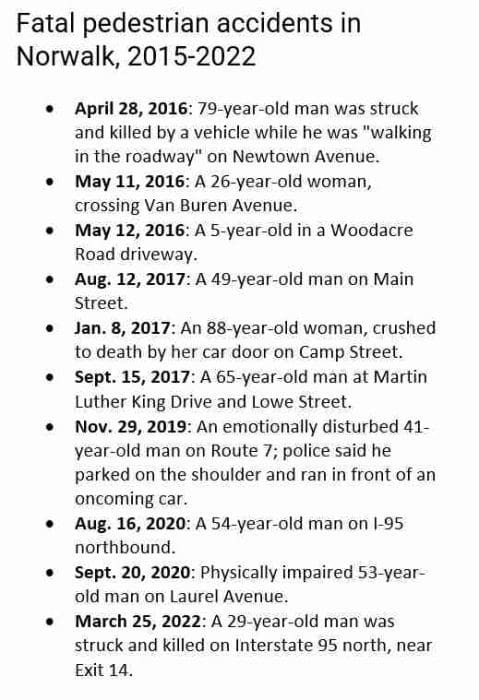 An analysis of pedestrian deaths over the past five years shows that most of them occur in urban settings along major roadways or in municipalities with state roads that run through them — such as Route 140 through East Windsor.

Anthony Cherolis of BikeWalkCT said it’s not only on highways where speeding has increased — drivers are speeding and running red lights on major municipal roads as well, where more pedestrian accidents tend to occur.

“When it is not peak congestion time, even on busy city intersections, cars are still going too fast. It’s not uncommon to see cars going 60 mph on main arteries like Albany Avenue or Wethersfield Avenue in Hartford or Whalley Avenue or Dixwell Avenue in New Haven,” Cherolis said.

Cherolis said the U.S. needs to catch up with technology that European companies are using to curb speeding, such as installing GPS-enabled speed limitations on cars.

“You see the e-scooters in Hartford and other cities — they are capped at going 15 mph by GPS-enabled speed technology,” Cherolis said. “In the EU, they are starting to require that cars have that same technology in place to deal with excessive speeding.”

The DOT’s Community Connectivity Grant Program, designed to “improve the safety and accessibility for bicyclists and pedestrians in urban, suburban and rural community centers,” started in 2018, and so far nearly $30 million in funding has gone to 79 cities and towns.

Gov. Ned Lamont recently announced an additional $12 million for the program. The projects already funded include $400,000 to improve the area around Ferry Street and Water Street in New London, where the train station and Block Island Ferry terminal are located; about $395,000 to update the Quinebaug River Trail in Killingly; about $377,000 to improve the bike trails and walkways around the entrance to Central Connecticut State University in New Britain, and $224,000 to put in new sidewalks on Route 1 in Old Saybrook.

One project already completed was the $400,000 realignment of Boxer Square in the west end of Stamford.

“It’s an area with the highest rate of non-car ownership in the city. More than 20% of the people who live there do not have cars, so there are people taking public transport or walking to work,” Oh said. “Our transportation projects haven’t always catered to minorities.”

“We’re looking at something called an integrated safety program, where instead of just looking at one aspect of how a vehicle is traveling — how fast it’s going — you’re intended to look at everything around that roadway,” Eucalitto said. “So from the lighting to the crosswalks and the curbs, we’re looking at things like roundabouts and other measures that can slow down traffic on our side roads, not just the interstate highways.”

University of Connecticut urban and community studies professor Mary Donegan said she believes that the Department of Transportation is getting better at addressing the growing population that doesn’t drive everywhere.

But she said there are different messages even among state agencies. While DOT is promoting bike lanes and sidewalks, for example, the state Department of Energy and Environmental Protection is pushing electric cars — which are heavier than internal combustion cars and can accelerate faster, Donegan said.

“How the state is going to spend its money for environmental stability but also social equity on our roadways is a key question,” Donegan said. “The state is heading in a better direction in supporting mass transit and better street designs.” 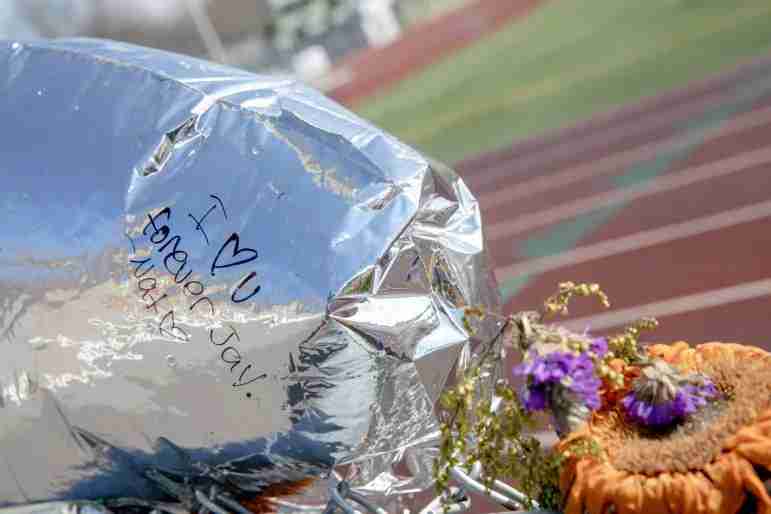 In the past 10 years, the number of pedestrians struck and killed by cars has more than doubled. Distracted drivers, speeding and larger and heavier cars are some of the causes. (Yehyun Kim, CTMirror.org)

But no matter how many sidewalks get installed or bike trails linked, the ultimate question will be how far the state will go to make it harder for people to drive.

“It’s easy to add a bike lane but much more difficult to say we are going to make it harder for people to drive, especially in cities where we have people walking or biking in congested areas,” Donegan said.

“That would mean doing things like limiting parking or shuttering parking garages or possibly cutting off access for cars to certain streets so that bikers and pedestrians can move freely without worrying about any cars.”

In Norwalk, density and more cars will contribute to this. Also distracted drivers, ignoring technology that could help was excluded in the article