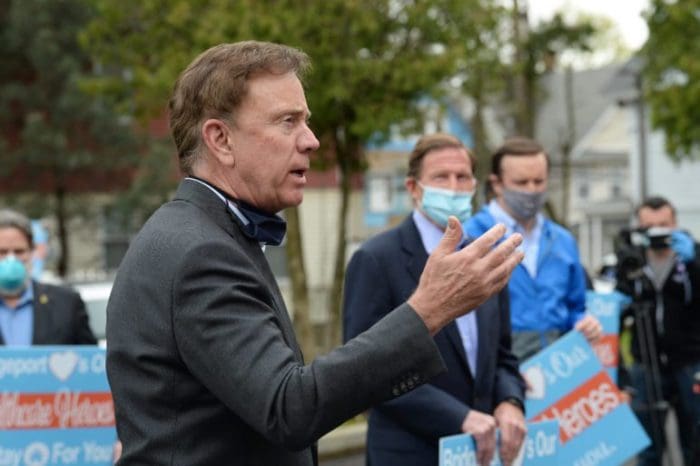 Gov. Ned Lamont addresses health care workers during a visit with a Care-A-Van to Northbridge Health Care Center in Bridgeport. He was accompanied by U.S. Senators Richard Blumenthal and Chris Murphy (background) to to recognize frontline health care workers, residents and patients in recovery from COVID-19. Northbridge is one of four COVID recovery centers in the state. (Cloe Poisson, CTMirror.org)

It took all summer and the first three weeks of fall for daily coronavirus infection test rates in Connecticut to climb back over 2% positive.

But it took only seven days — until Tuesday — to hit 3%, prompting a worried appeal from Gov. Ned Lamont for public vigilance.

“We’re all going to have to be a little more disciplined,” said the governor, who interrupted his own press conference on small business assistance to preview distressing infection statistics.

“It’s those small, informal interactions taking place now” that are driving up numbers, the governor said, adding he understands residents are facing pandemic fatigue and have grown tired of the social distancing and other spread-control measures forced upon them since mid-March. “It will be over a lot faster if you wear the mask and keep the distancing.”

Lamont, who appeared at 1:30 at Lilly’s soul food restaurant in Windsor to announce a grant program,  said the daily infection rate for Monday — which involves the share of coronavirus tests completed that day that turned up positive — reached 3%.

The administration specifically reported 434 more cases out of 14,653 tests completed. It also reported five more deaths from COVID-19, bringing the statewide total to 4,559 since the pandemic began. And there were 22 more patients hospitalized, bringing the total across Connecticut to 217.

Connecticut hadn’t recorded a daily infection rate this high since June 5, when 4.4% or 358 of the 8,160 test results logged that day were positive.

And the latest report also means Connecticut’s weekly infection rate — a much more important COVID-19 metric for most healthcare experts — has reached the 2% mark for the first time since early June.

For most of the summer, both daily and weekly infection rates hovered close to or less than 1%.

Lamont expressed concerns on Oct. 13, though, one day after Connecticut cleared the 2% mark for daily infections for the first time since mid-June.

The governor noted that the weekly rate at that time was about 1.5% and remained the lowest in the nation.

Five days earlier, on Oct. 8, Lamont went forward with the third phase of his plan to reopen business activity since widespread closures were ordered in March and April.

The latest round included permitting theaters and concert halls to reopen on a limited basis and increasing the indoor capacity of restaurants and event venues. Business leaders have said this is essential as New England weather turns crisp and customers might be wary about selecting outdoor seating.

Lamont stuck by the third phase of his reopening Tuesday, despite clearing the 3% infection level, but cautioned he would reconsider things if the rate approaches or clears 5%.

Lamont did recently empower 11 communities with high local infection rates — most of which are located in eastern Connecticut — to reverse the third phase of business reopening. To date, only Windham has chosen to do so.

The surging infection levels did prompt the governor Tuesday to reverse a plan he’d announced just one day earlier, specifying when people arriving in Connecticut from other states might have to quarantine for 14 days.

Since July, Lamont has been requiring residents returning from vacation or visitors arriving here from other states to quarantine for 14 days if the state they’d left behind faced high infection levels according to either of two standards:

But Connecticut already is close to failing the second standard, so Lamont proposed a modestly easier test on Monday: Quarantines were to be required for visitors from a state that failed the 10 positive tests per 100,000 residents and also had a weekly infection rate in excess of 5%.

On Tuesday, though, Lamont said that after consulting with governors in New York and New Jersey — who’ve been collaborating with Connecticut on this travel quarantine policy — the original, more stringent, standards will remain in place.

“Our states have worked together successfully in combating this pandemic since the beginning and we’ll continue to do so,” the statement said. “The travel advisory was designed to keep our respective states safe, with the understanding that we are a connected region, dependent on each other when it comes to commerce, education, and health care. We’re urging all of our residents to avoid unnecessary or non-essential travel between states at this time, but will not subject residents of our states to a quarantine if coming from a neighboring state.”

The statement said the Lamont administration will reach out to Massachusetts and Rhode Island to discuss working out a similar regional approach.

The governor added that the rising infection level underscored the need for more relief to small businesses, which may have to struggle with limited customers and various restrictions through the winter and spring until a coronavirus vaccine has been developed and circulated.

The administration proposed a $50 million grant program for businesses with fewer than 20 employees or with an annualized payroll $1.5 million or less.

Businesses could receive a one-time grant of up to $5,000.

“Small businesses are truly are heart and soul of this economy,” said Department of Economic and Community Development Deputy Commissioner Glendowlyn Thames, who added that Connecticut has an estimated 50,000 businesses that fit this criteria, employing about 350,000 people statewide.

Thames said the goal is to provide assistance to roughly 10,000 businesses.

The program would be funded with federal coronavirus relief assistance. The state would begin accepting applications the week of Nov. 9 and provide grants by Dec. 30, Thames said.

Lamont launched a business loan program in late March using state funds. Originally budgeted at $25 million, it was doubled to $50 million but still fell far short of the demand for relief.

Despite doubling the program’s budget, the administration closed the application period within two days after receiving requests for relief that quadrupled the available $50 million.