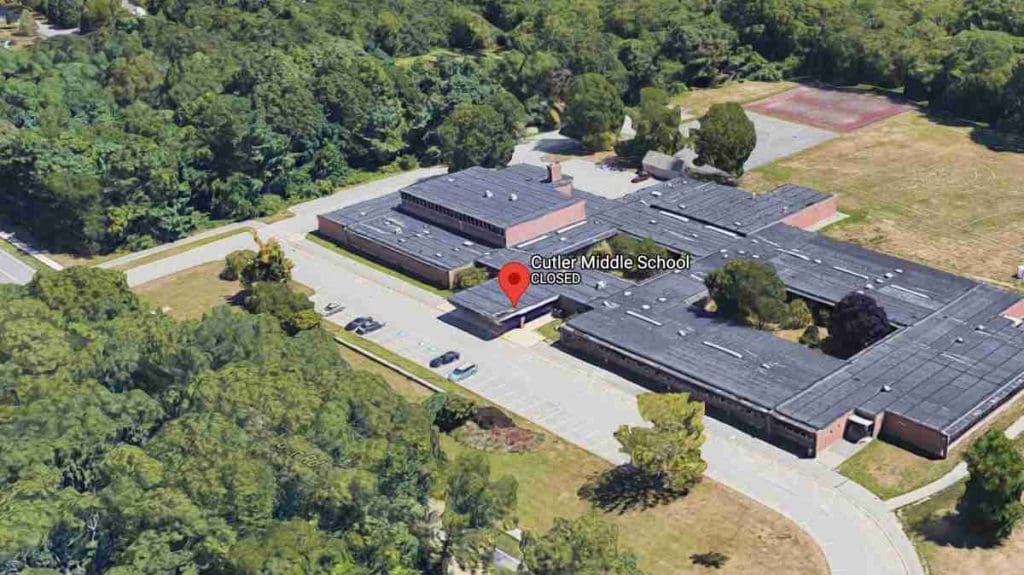 Cutler Middle School in Groton, one of the school construction projects under investigation by a federal grand jury. (Google)

At least four Connecticut municipalities have received subpoenas from a federal grand jury seeking records from school construction projects and any correspondence with Konstantinos Diamantis, the former state official who oversaw the projects’ funding.

The subpoena for Groton officials seeks records for two school projects, the West Side Middle School and the Carl C. Cutler Middle School, which were converted into elementary schools at a cost of about $90 million in 2019.

The subpoena also seek all documents to and from the state Office of School Construction Grants & Review (OSCG&R) as well as communications to and from the leader of that team, Konstantinos Diamantis.

Diamantis resigned from his post leading OSCG&R and was fired as deputy secretary of the state Office of Policy and Management on Oct. 29, 2021. His oversight of the school construction program has become the focus of a federal grand jury investigation, which issued its first subpoenas last April.

Groton is the fourth municipality to receive a subpoena from the federal grand jury concerning school construction programs. The others are Bristol, Hartford and Tolland. The subpoenas asked municipalities to submit all responsive material to the grand jury by March 15.

The CT Mirror reported in mid-February that Groton officials butted heads directly with Diamantis and his team over choosing a contractor to do hazardous waste removal at the two schools.

Local officials had already selected O&G Industries, a Torrington-based company, to serve as the primary contractor for the projects, but O&G needed to hire a demolition and hazardous materials cleanup crew for the job.

To do so, the town followed the normal procedures and solicited offers from a number of companies specializing in those services.

The town was prepared to hire Stamford Wrecking Services for the West Side project and American Environmental Inc. for the Cutler project because they were the lowest bidders.

But local officials were stopped before they could complete the contracts, town officials said.

Greg Hanover, Groton’s Director of Public Works, said someone from the state notified O&G that it should reject the lowest bids and award the contracts to AAIS, a West Haven company that was the runner-up for both school projects.

Hanover declined to say who the state official was that made that decision.

“Somebody contacted O&G from the Office of School Constructions Grants and Review and informed them that there’s a new policy in place and that for demolition contractors we were supposed to use one of the state-qualified contractors and pay them on a time and material basis,” Hanover said.

But the town “pushed back” and informed the state that the town had already completed the procurement process for the work, Hanover said.

There were significant price disparities between what the winning companies had offered and what AAIS had proposed. For the West Side school project, for instance, Stamford Wrecking’s bid was hundreds of thousands of dollars less than the bid submitted by AAIS.

“It kind of went back and forth, but we ultimately prevailed over the state and hired the two low bidders,” Hanover said.

A similar situation played out in Bristol when city officials there tried to hire a contractor for hazardous waste removal at the Bristol Elementary School project.

In a letter to Diamantis, the city’s former corporation counsel, Dale Clift, questioned why Diamantis’ team was getting involved.

The letter shows that the city received numerous bids for the demolition and abatement work for Bristol’s Memorial Boulevard Arts Magnet School on April 21, 2020.

Select Demo Services, which is headquartered in New Hampshire, was the lowest bidder, offering to do the work for $4.73 million.

But before the contract could be finalized, Clift wrote, officials in the city were approached by Michael Sanders, a former employee at the state Department of Administrative Services. He advised the city to reject the other bids and hire Bestech, an Ellington-based company, instead.

According to Clift’s letter, that “directive” was delivered by Sanders but was issued by Diamantis. The city ultimately chose the low bidder.

Norwalk Mayor Harry Rilling said he is “not aware” of any subpoenas being issued to Norwalk.  Chief of Staff Laoise King definitively said none have been received.
NancyOnNorwalk reporter Nancy Chapman contributed to this story.

And Enfield makes five. Top executives at Gilbane Building Company and Construction Solutions Group are being looked at by Feds:

Will Norwalk be next?