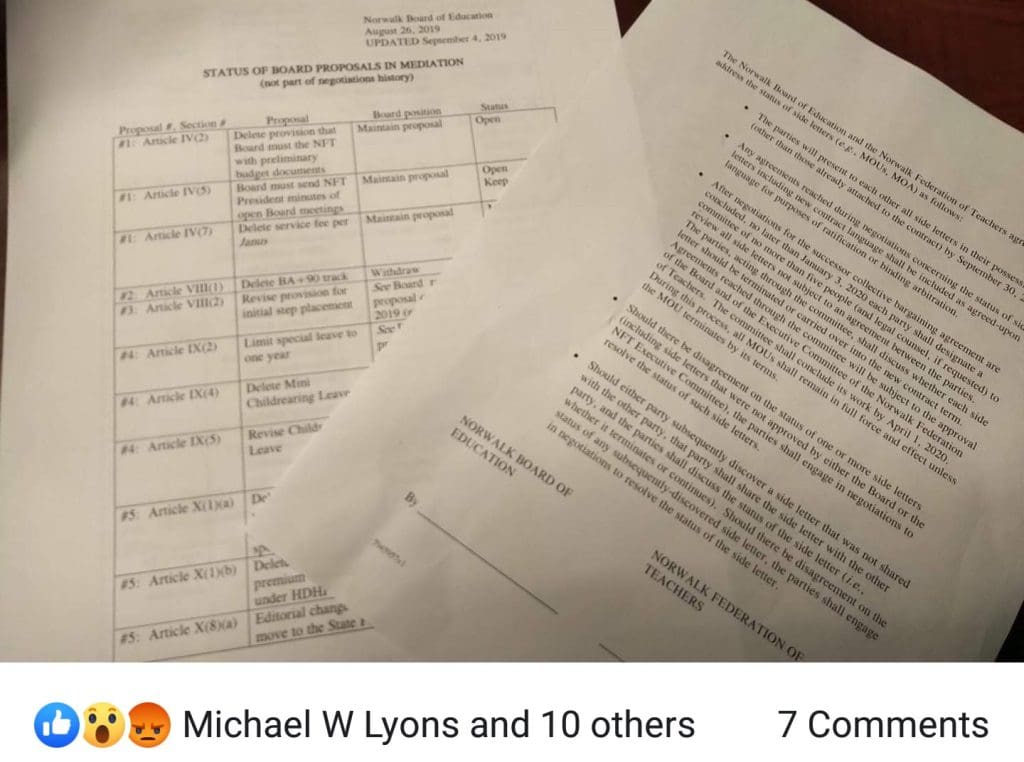 A photo posted Thursday on Facebook by Norwalk Board of Education Chairman Mike Barbis. 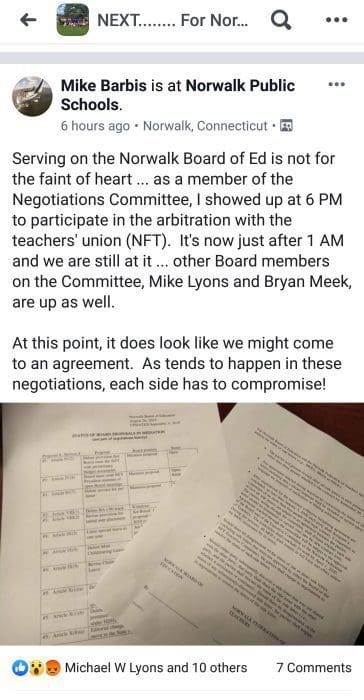 The original Facebook post from Norwalk Board of Education Chairman Mike Barbis. (Screen capture provided by NancyOnNorwalk reader) NORWALK, Conn. – Norwalk Board of Education Chairman Mike Barbis took a break early Thursday from a lengthy contract negotiation and on Facebook posted a photo of what appear to be confidential documents, related to the negotiations with the Norwalk Federation of Teachers. Pushback was immediate. “why is Barbis posting pics in an active negotiation, mid-negotiation?” one man wrote.

NORWALK, Conn. – Norwalk Board of Education Chairman Mike Barbis took a break early Thursday from a lengthy contract negotiation and on Facebook posted a photo of what appear to be confidential documents, related to the negotiations with the Norwalk Federation of Teachers.

Pushback was immediate. “{W}hy is Barbis posting pics in an active negotiation, mid-negotiation?” one man wrote.

The post had been removed at about 3 p.m., when a reader alerted NancyOnNorwalk to the situation, sending screengrabs which included a clearly readable tentative agreement concerning “side letters” and a document listing the status of Board proposals in mediation.

Norwalk Federation of Teachers President Mary Yordon did not respond to a NancyOnNorwalk email asking about the post. She is quoted in The Hour as saying that the agreed upon confidentiality rules had been breached.

Barbis represents District E as a Democrat and is seeking reelection this fall, with no opponent. In his initial post early Thursday, on a page he manages, he wrote, “Serving on the Norwalk Board of Education is not for the faint of heart….as a member of the Negotiations Committee, I showed up at 6 PM to participate in the arbitration with the teachers’ union (NFT). It’s now just after 1 AM and we are still at it… other Board members on the Committee, Mike Lyons and Bryan Meek, are up as well.”

He continued, “At this point, it does look like we might come to an agreement. As tends to happen in these situations, each side has to compromise!”

“Why does that say delete mini child rearing leave?” a teacher asked.

“{D}o you know if arbitration rules make these documents public throughout negotiations? I’m not clear on those rules,” the man replied.
The man did not get an answer. After the Barbis post was deleted, the man posted his question again, drawing a reply from Lyons.

“First, this wasn’t an arbitration, it was a mediation. Second, the confidentiality rules are by agreement with the union and terminate upon an agreement being reached. So Mr. Barbis didn’t violate any rules by showing the signing,” Lyons wrote.

Except that the photo was of the documents, not the signing: that came in a second Barbis post. “This photo is of me signing the tentative agreement at 230 AM,” Barbis wrote. “This will need to be ratified by the members and approved by the full Board of Ed.”

Lyons made no more comments on Facebook, that NancyOnNorwalk can see.

The Hour’s story prompted much commentary on the Norwalk Parents for Education page, where Meek defended Barbis, calling the press coverage a “nothing burger.” 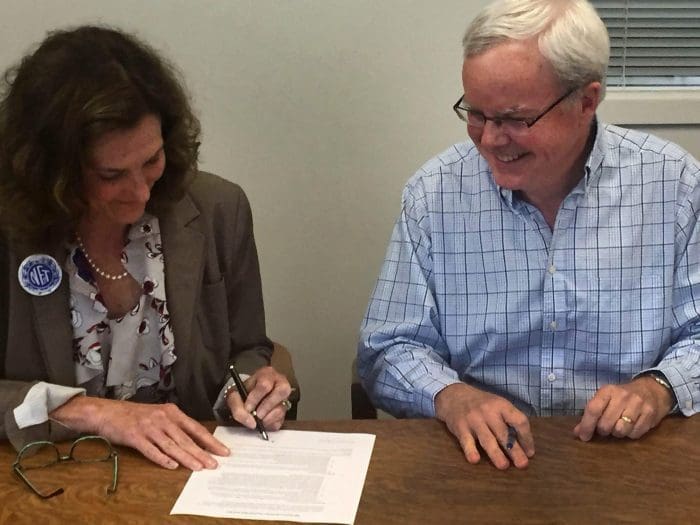 “Making mountains out of molehills. This type of announcement has been made before with the same timing before full board and union ratification. The same happened here when we saved a ton of jobs by switching health care providers a few years back,” Meek wrote, posting an old photo of Lyons and Yordon signing a contract, with no confidential documents clearly readable in the image.

“{S}o rules do not have to be followed?” Tracey Smith replied.

“{H}ad the agreement not been reached, it would have been an issue. This was after the agreement was reached. It’s really a non story, but then I guess Fotis couldn’t be arrested again today,” Meek replied.

“So our BOE member speaks about the Fotis case. There are five children without their mother. So tasteless. Time for a change in BOE,” replied Smith, who does not live in District D, where Meek is running for reelection. “{I}f he did nothing wrong, why did he amend his post?”

“{G}ive it a rest,” Meek replied. “Bigger fish to fry than this. The updated picture shows a better representation of what was achieved. Move on as they say.”

“I will not give it a rest,” she shot back. “You are suppose to speak for our children and your comments on here are NOT professional at ALL. Follow the rules it’s that simple. Who are you to tell a parent to give it a rest? I PRAY that the people in your District vote wisely in November.”

“{Y}ou are entitled to make a federal case out of this all you want,” Meek replied. “Most of us are focusing on the big issues. A new contract is a big deal and saves both sides a lot of money on lawyers and arbitration costs. Most of us would rather spend the money on the students and saving taxpayers money. It seems that you would rather we pursue the more costly option for a simple misunderstanding. Or maybe I’m missing something else from your continued pursuit of the matter.”

Another poster pointed out that if the union hasn’t ratified the contract and the Board hasn’t voted yet, then technically there is no contract yet. “The Union can now use this to re-nig on their tentative agreement that they just signed. Also, if there was something that the Union wanted, they can say no deal or vote it down, then they go back to the negotiation table.” 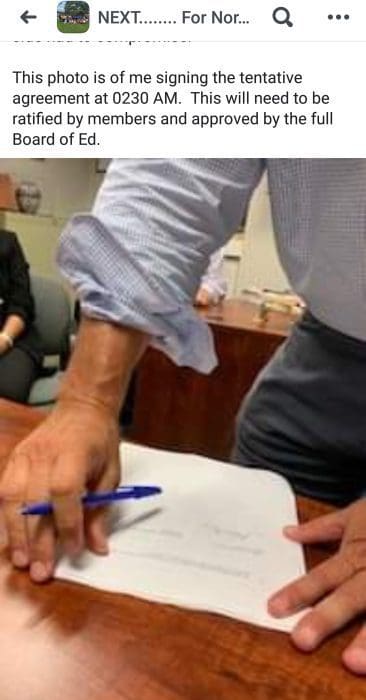 “{I}t’s really difficult to fathom the constant parade of litany from a few, who can never seem to find anything positive and are ready to pounce on the slightest perceived misstep that has nothing to do with the larger picture,” Meek wrote. “That said, in the larger picture we do have 8 candidates vying for 5 seats to help move the school system forward and I’m confident that whatever the outcome from that is, we’ll have a board that can continue the progress. Solidifying the teacher’s contract is huge. This contract is by far the largest single expenditure that our city commits to on an annual basis and it is crucial to our ability to retain and attract the best possible talent we can have for our students.”

The Board of Education in April approved a civility code. By singing it, each member promised to represent the district honorably in person and in social media, to “Take no private action that might compromise my performance, my responsibilities, the board or the administration,” and to “respect the confidentiality of information that is privileged by law, or that would needlessly harm the district if disclosed, including that which is shared and discussed in executive session.”

Board member Julie Corbett, who spearheaded the creation of the code, did not reply to an evening email asking if it had been violated by Barbis or Meek.

NancyOnNorwalk sent a late evening email to Democratic Town Committee Chairman Ed Camacho and Mayor Harry Rilling, asking if they were concerned about any possible liability from breach in confidentiality stemming from the Barbis post, and if any action had been taken.

The screen captures posted with this story were edited at 6:30 p.m. to remove possible identifying information.

I was Chairwoman of Negotiations when I was on the BOE. It was an eye-opener and it made me very jaded. The NFT teacher’s union negotiations have zero to do about kids, the negotiations are all about salary, benefits, work rules, grievance rights, keeping what they’ve got and getting more; they’re private because the unions want it that way, not BOE’s.

Those NFT contracts, and the 1,000’s just like them around the country, are the reason why the majority of America’s kids can’t read or do math at grade level; why dyslexic kids who have parents w/out the resources to pay for outside help are doomed to failure.

Teacher Union contracts give teacher-members tremendous rights and protections. Yet, unless a student has an IEP and parents have $$$, no students has the right to read.

Sue: Not sure if you can give examples, but I’m sure it will make for great reading if you can.

Whoa! Collective bargaining is between the employer and the employees. Kids are not party to this process and educators are not required to take vows of poverty. If the process is too onerous for some BOE members they should find other members who can stay up late without getting cranky and letting their idle fingers breach confidentiality. Last best offer binding arbitration is not fun but definitely preferable to the days of teacher strikes – a major disruption for students and families. As someone who has been on strike AND stayed up way past my bedtime to participate in negotiation/arbitration on both sides of the process @ different times, get a grip folks!

Nancy: As the creator of the Next Page and Administrator of this page I find extremely disturbing taking screen shots without my or the other admins permission ! You were not allowed to do that. And further you actually admired at one time that you didn’t even know this page basically existed. This is Steue violation of trust on Next and consider this a warning that should you violate it again we will remove you.

On Barbis: i don’t understand why no one is running against him. How many humiliating things can this guy do before it’s too much? He literally screams at parents, belittles the black community, costs us thousands because of his irresponsible emails, lies about how many kids will come out of POKO and now is posting confidential documents on Facebook. What is wrong with the Democrats that they endorsed this guy?

On Meek: I almost spit my coffee out when I read your quote on the “constant litany of a few who never have anything positive to say and are ready to pounce on any perceived misstep.” This is the defining characteristic of you and your candidate Lisa Brinton! I couldn’t have described you guys better.

So, Sue Haynie, you think negotiations of a contract shouldn’t be mainly about salaries, health insurance, keeping benefits, etc.? Teachers have to fight to keep all of these items in order to afford a fairly decent life for themselves and for their children. Teachers don’t make millions, like movie stars and sports professionals. I guess you don’t respect teachers very much if you want contracts to be about kids, not about a decent and fair wages for teachers. May I remind you that there is a teacher shortage in this country? Gee, I wonder why…

Bobby Lamb-AGREE! Norwalk needs and deserves better than this (these) guy/s.

In hindsight it is likely (because he removed them) Mr. Barbis realized that it wasn’t a good idea to post these shots on Facebook because they created a hullabaloo. I think Mr. Barbis’s only mistake was not recognizing that his post would be misinterpreted and therefore create a fuss. That said, I don’t see anything in these shots that breach confidentiality. I believe the outrage by some parents is definitely over the top. I’m not sure what was edited out of the original post but what I do see doesn’t offend me or create concern.

Barbis is right that serving of the BoE is not for the faint of heart. The commitment in time and energy is huge and it’s all volunteer work. The public/ parents, the press and dealing with the Unions is brutal. Mike Barbis, Mike Lyons and Bryan Meek sometimes can have an edge and rub some people the wrong way but I know they work really hard on behalf of our students and they do a great job. That fact is what matters to me. No one is perfect and frankly I’m thankful they can be tough because they need to be in this city to get the results they do.