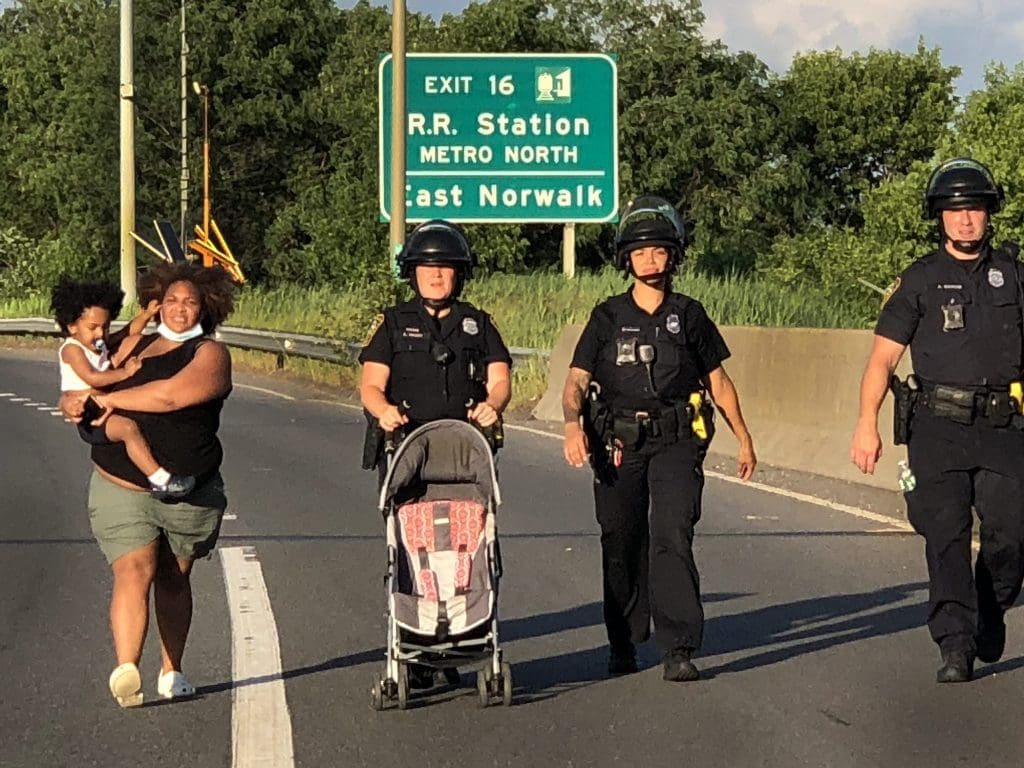 A woman who said her first name is Diamond travels down Interstate 95 on Saturday, with the help of Norwalk Police. (John Levin) 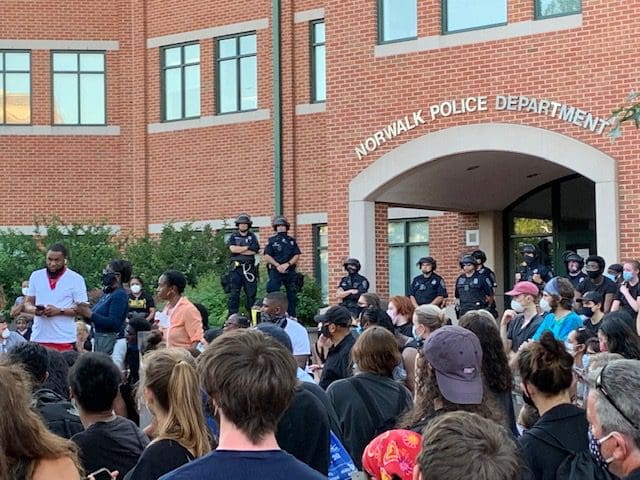 NORWALK, Conn. – Black Lives Matter protestors gathered Saturday in Norwalk, shutting down Interstate 95 for the second weekend in a row.

At least three Norwalk Police officers joined the peaceful protestors in taking a knee at Norwalk Police headquarters, and although Norwalk Police Chief Thomas Kulhawik said he’d been concerned counter protestors would show up, there was no sign of dissent. One participant was almost hit by a car after jumping the I-95 jersey barrier to stop traffic on the northbound side, which police did not expect, according to Kulhawik. Traffic was stopped on both sides of the highway for about half an hour. 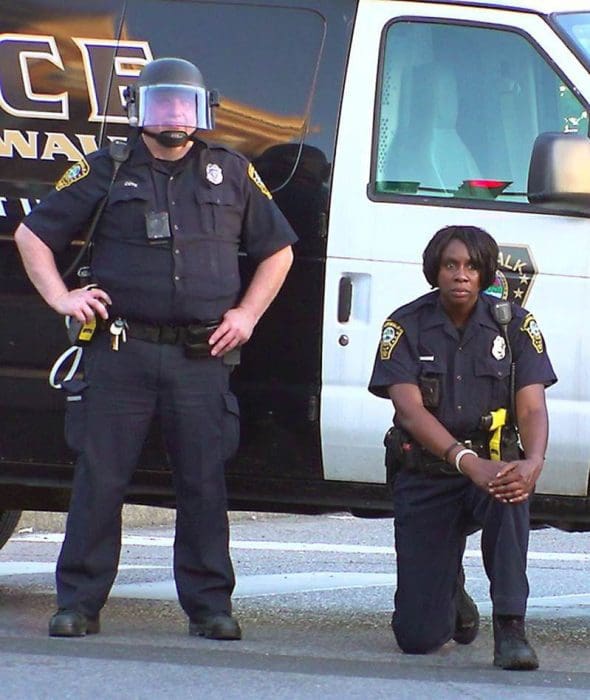 Norwalk Police Officer Monica Billingslea takes a knee during Saturday’s Black Lives Matter demonstration outside Police Headquarters. Billingslea has been a patrol officer with the department since 1993. (Harold F. Cobin)

“Our voices are being heard,” Brianna Green said, speaking to a crowd estimated by Kulhawik to be of about 300 people, observing that the Minneapolis police officer who has inspired protests nationwide, and in some other countries, is facing intensified charges. 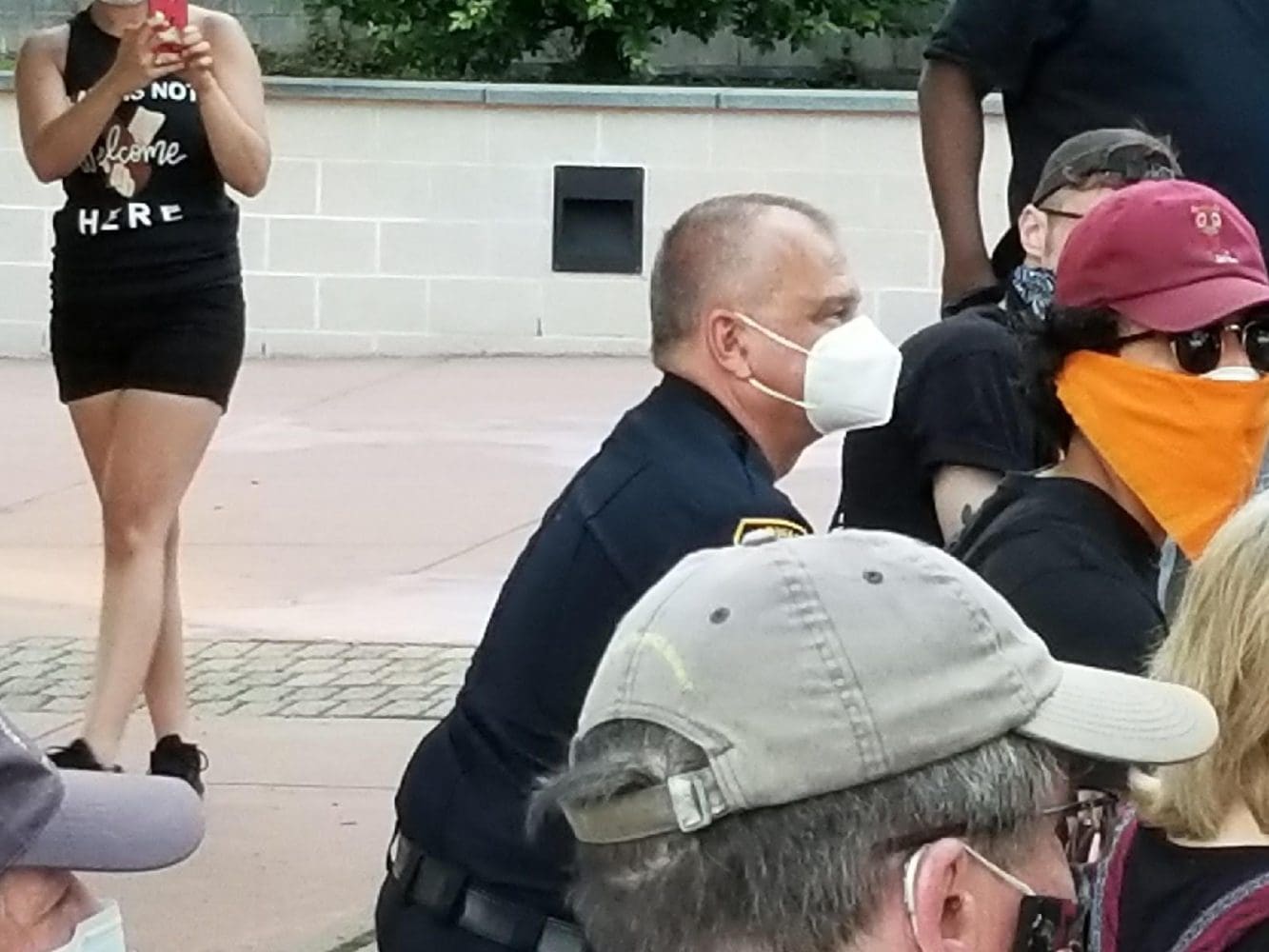 It’s not enough that the protests have gotten results, Green said Saturday. “Because God forbid if this were to happen again, no way this shouldn’t have even taken us this long to come together as a family. This is a family, right? And everybody’s here, right? You guys are going to protect each other and everything and honestly, I’m loving the diversity here.” 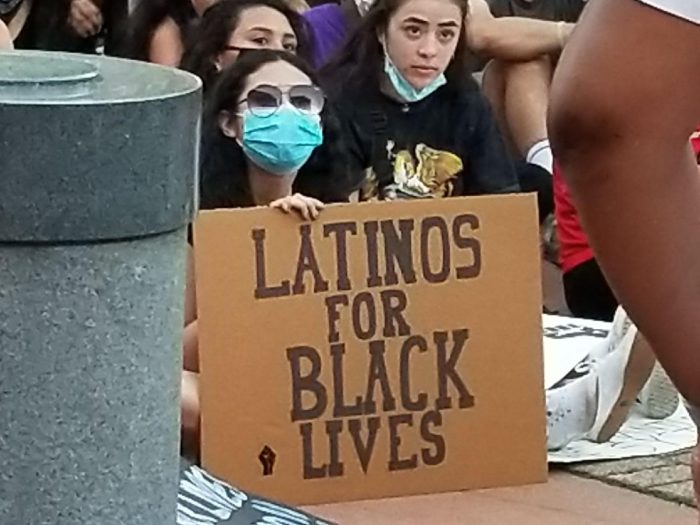 The march began at Norwalk City Hall, and the crowd seemed to be about the same size as the one a week ago, with similar demographics. Protestors entered the highway at Exit 16 and police helped stop traffic. Police then rushed to close down the northbound side, as protestors jumped the barrier. A car swerved out of the way and missed one of them, Kulhawik said.

Gabrielle Paulk was among the speakers at the police station. 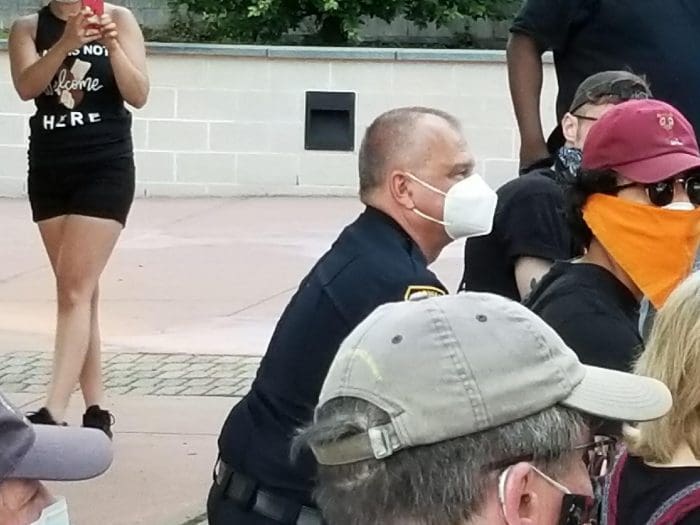 “I’m not a big fan of doing protests before, I’m like, what’s it gonna do? Like, what am I really achieving with this? It’s kind of like repetitive cycle,” he said.

But he grew up and became educated, and, “I found all these problems going on in my community as well, and my people as well, and I see all these mental issues going on with my people as well,” he said. “It’s beautiful seeing everyone here. Not just my people, it’s everyone, everyone come in here in solidarity for what happened, in solidarity to each other.  It means something, we’re helping each other heal. That’s an important process that we don’t take enough time to pay attention to.” 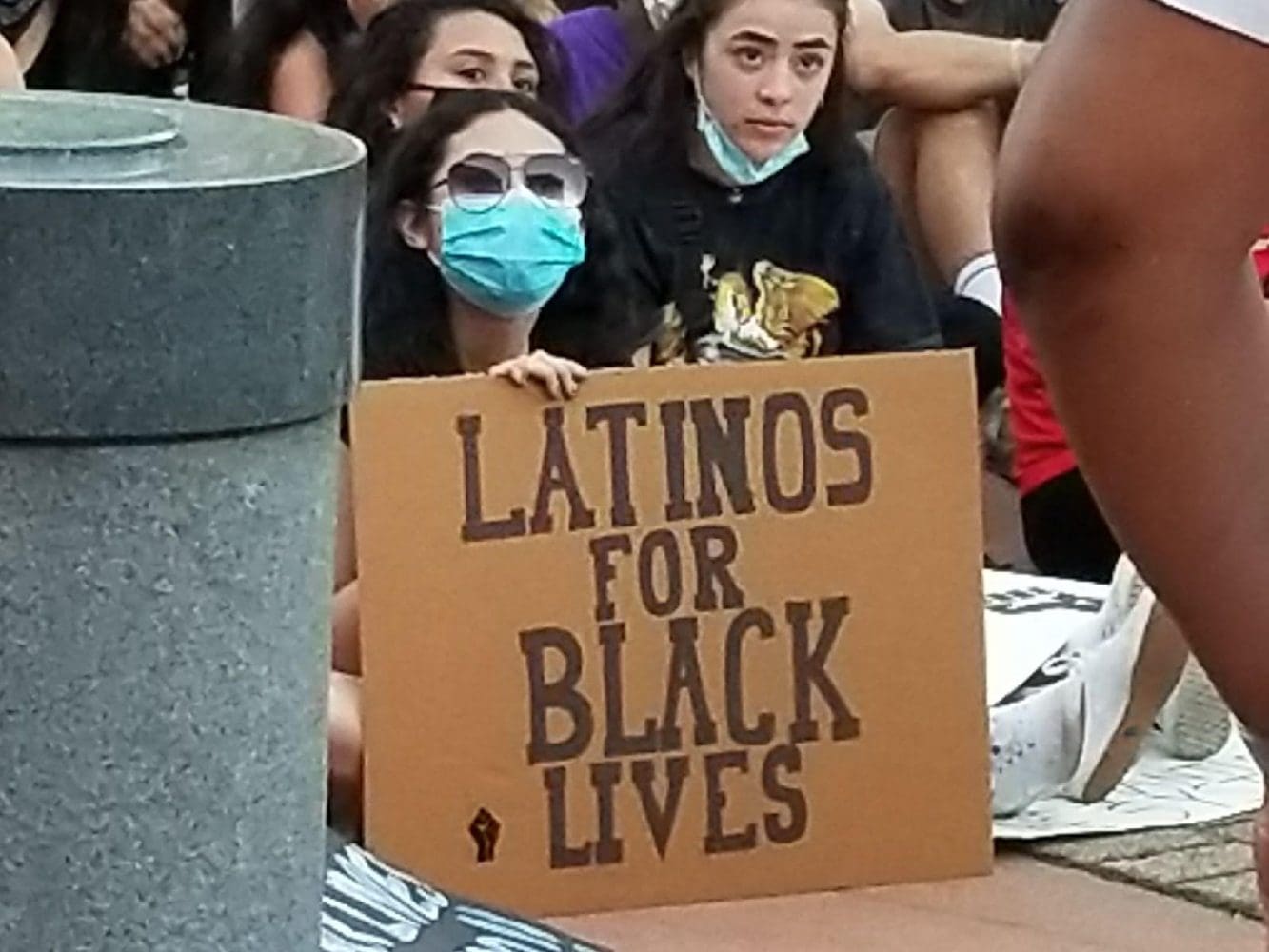 Is there a place where all photos from this peaceful protest are posted. I didn’t take any myself because I wanted to be fully present, but would love to see all crowd shots in case I spot myself for my own commemoration.

Are the helmets and zip tie handcuffs really necessary. It seems that this militarization of the police is part of the problem. What ever happened to professional police who wore a dress police shirt and a tie and a true police hat? IT seems that Cesare was the last. They seemed to get more respect at that time.

Yes Ron it seems those are necessary. Haven’t you watched the news!? It’s part of the uniform now. If Caesar was there he’d have his helmet and zip tie cuffs on too! Great to protest not great to riot and loot. Thanks to the people of Norwalk to do it the right way!

Ron you mean that intimidating photo of the cop pushing the stroller? Glad we have well prepared police, and not Barney Fife. These things can flare up in no time.

“Are the helmets and zip tie handcuffs really necessary[?]” I think you ask an excellent question – fortunately largely rhetorical, I suspect. No, “clearly helmets and zip tie handcuffs” were not necessary, as the protest activities in Norwalk and neighboring towns have been universally peaceful. But I would be reluctant to second guess the commanders of our local police forces, including the Norwalk Police Department. These individuals are tasked with ensuring the safety of all people as well as their own officers. I suspect the helmets and handcuffs decision was made out of caution and prudence; these are public events which are not controlled by anyone, and violence has appeared sporadically and unpredictably at other events throughout the country in recent weeks. Why take the risk, given that just one or two self-appointed anarchists can alter a peaceful situation in an instant?

If I were required by my job to attend these protest events for their duration, I would prefer to do so wearing shorts, a t-shirt and flip-flops. But I suspect no officers were given that choice. Moreover, helmets or no, I have been consistently impressed by how professionally Norwalk’s police officers and commanders have conducted themselves at these events. As a town I think we should be proud of how they have served us.

Sad to see that some cannot see the issue with the militarization of the police. I guess some have been conditioned to believe that this is acceptable. This is the reason that Police Departments including Norwalk will be defunded in time.

Scott
Yes I have watched the news where the police have assaulted peaceful protesters all over this country.
Please people do not think that Norwalk does not also have issues. Many cops have had issues and have been the subject of civil right lawsuits. Google will give you a list.