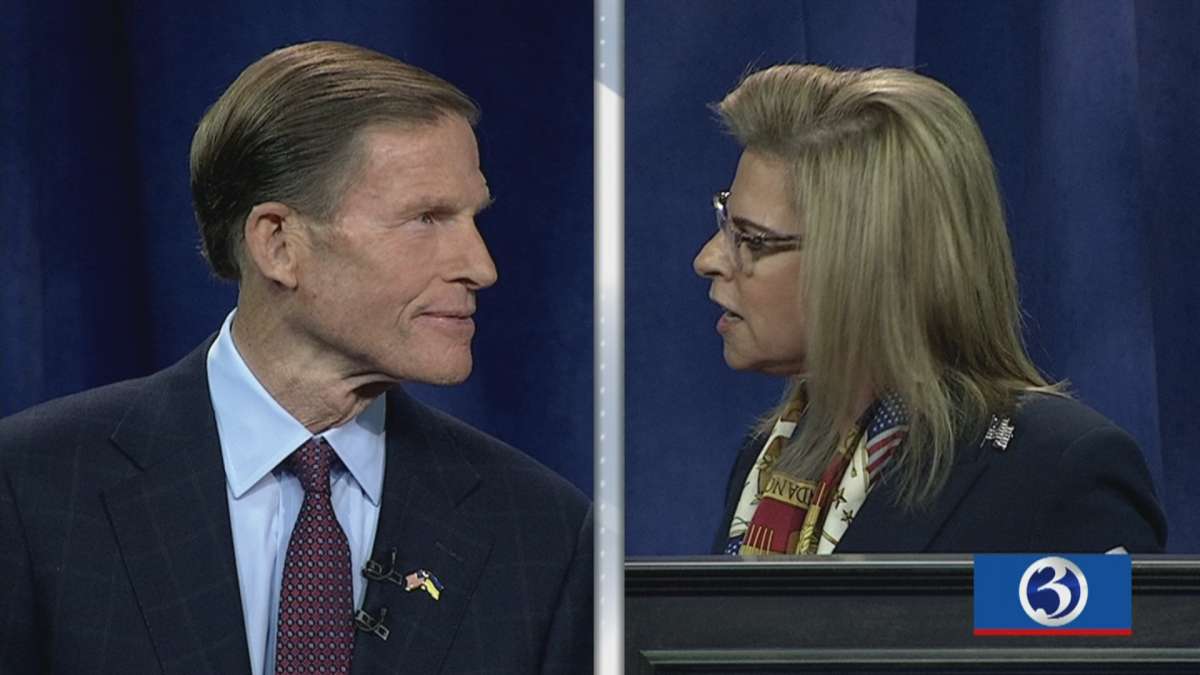 Sen. Richard Blumenthal issued a forceful rebuke of his Republican opponent at Wednesday’s U.S. Senate debate, as Leora Levy continued to rail against the longtime Democratic senator for being a “rubber stamp” of the Biden administration.

The debate, hosted by WFSB Channel 3 and CT Insider, displayed the sharp differences between the two candidates over a wide range of issues, including the economy, energy, abortion rights and domestic programs like Social Security and Medicare. It was the only scheduled debate for this race.

Blumenthal, who is seeking a third term in the senate after serving as the Connecticut attorney general for 20 years, is being challenged by Levy, a political fundraiser and member of the Republican National Committee.

Economic issues like inflation and energy costs were a prominent theme during Wednesday night’s debate. Public polling in the weeks leading up the election has shown that economic issues are the primary concern for voters around Connecticut and the U.S.

Blumenthal said he wants to keep working to reduce energy prices ahead of the winter months, citing efforts to seek additional funding for the Low-Income Home Energy Assistance Program, also known as LIHEAP. He said he has also urged President Joe Biden to release more barrels from the Strategic Petroleum Reserve to help lower costs.

Republicans are seeking to use the economy as a wedge issue in the midterm elections. Levy accused Democrats of “deliberately” causing inflation by passing costly legislation and said she would curb federal spending. But Democrats dispute that characterization and say the measure will lower costs for Americans, particularly when it comes to health insurance.

The two candidates also briefly clashed over the lapsed expanded child tax credit included in Democrats’ federal pandemic relief package, the American Rescue Plan. The aid helped lift children out of poverty, but it expired at the end of the year without being renewed.

Blumenthal said that while he wants to restore the child tax credit when Congress returns to Washington after the election, his opponent does not support it. But Levy pushed back, arguing that she has never addressed the issue and would not oppose such a credit. She said that Blumenthal’s support for certain measures, like those included in the recently passed Inflation Reduction Act, are “election-year gimmicks.” 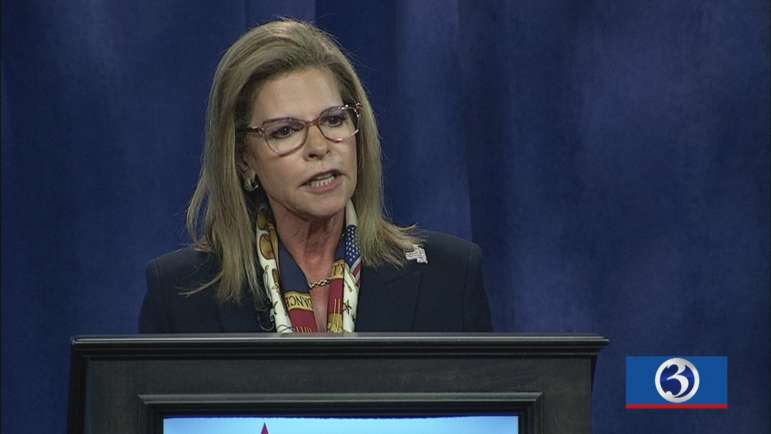 “He talks about this, but these things that he’s talking about are all election-year gimmicks, and especially this releasing the oil from the Strategic Petroleum Reserves,” Levy said. “I’ve never been so worried about our country.”

They both sought to tie one another to the leaders of their respective parties. Former President Donald Trump has low favorability ratings in Connecticut and lost to Biden in the state by 20 percentage points in 2020. But since taking office, Biden has also seen his numbers dip.

Blumenthal repeatedly referenced Levy’s support for and from Trump.

“If you always have President Trump’s back, you can’t have Connecticut’s back,” Blumenthal said. “If you are 100% for Trump, that’s 100% wrong for Connecticut..”

Levy once again downplayed her endorsement from Trump, which helped her secure a resounding victory in the August GOP primary. Levy called herself a “unifier” when it comes to garnering support from Republicans across the party. Blumenthal rejected that characterization in remarks to reporters after the debate. Levy left immediately after the debate without taking questions from the press.

Trump recently held a fundraiser for Levy at his Mar-a-Lago resort in Florida to help her compete with Blumenthal, who stockpiled millions of dollars and has been heavily spending it over the past few months.

When it comes to the leader of his own party, Blumenthal gave a more muted endorsement, noting that Biden has not made a decision about whether he will seek reelection in 2024. Blumenthal said he will “probably support” the president while adding that “we don’t know who else is going to run.”

The candidates were also asked about their positions on abortion. Levy reiterated her opposition to abortion with exceptions for rape, incest or if the life of a pregnant person is endangered. She said she supports the Supreme Court’s decision to overturn Roe v. Wade and send the issue of abortion access back to the states. Connecticut protects that right through state law.

But Levy, who was previously a supporter of abortion rights, was pressed about her shifting position on this issue by one of the debate panelists. In response, Levy said “my heart changed,” adding that she saw things differently once she had her own children.

Blumenthal said he believes the decision to terminate a pregnancy should be between a patient and a doctor and that he would support codifying abortion protections at the federal level, a bill that has stalled in the divided Senate. 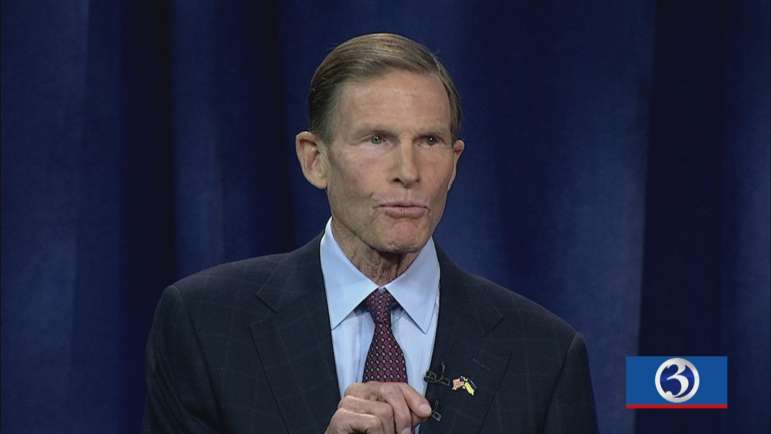 U.S. Sen. Richard Blumenthal stressed his belief that the decision to terminate a pregnancy should rest with the individual and their doctor – not the government – during Wednesday’s debate. (Courtesy WFSB/CT Insider)

Another major point of contention was over the fate of Social Security and Medicare if Republicans regain one or both of the majorities in Congress.

Democrats are pointing to comments from House Minority Leader Kevin McCarthy, R-Calif., that a GOP majority would use talks on raising the debt limit to push for spending cuts, which could undermine those domestic programs. And a plan from Sen. Rick Scott, R-Fla., who is tasked with helping Republicans take back the Senate majority, has proposed “sunsetting” all federal legislation after five years, meaning Congress would need to reauthorize Social Security and other programs.

“That’s where the Republicans will go if they take over,” Blumenthal said. “Cutting benefits is not an option.”

Levy disputed that characterization and instead placed the blame on Democrats for the state of the social safety net programs.

“I don’t know any Republican that wants to cut those programs,” Levy said, without saying whether she would oppose any efforts to slash funding for either Social Security or Medicare.

On other pressing issues, Blumenthal and Levy sparred over police funding. The senator said he does not support “defund the police” efforts and wants more resources to address law enforcement shortages as well as accountability. Levy touted her endorsement from the Connecticut Fraternal Order of Police.

And on providing more aid for Ukraine as it continues its defense against Russia’s invasion, Blumenthal said the U.S. has a moral and national security obligation to keep assisting the eastern European country. But when Levy was asked the same question, she instead focused on criticizing Biden’s foreign policy record, including the fallout over the U.S. withdrawal from Afghanistan.

On one of the most charged questions of this election cycle, however, the two candidates seemed to agree.

When asked if they would accept the outcome of the election if they lose on Nov. 8, both Blumenthal and Levy gave brief but unequivocal answers, unlike some Republican candidates in other states who have not committed.

It is no wonder that Blumenthal wants to paint Levy as a Trump supporter. Look at it from Blumenthal’s worldview.

The democratic party at all levels is a highly organized, monolithic, top-down organization with strong central control. This allows the democratic party to speak with a unified voice, at all levels, on virtually any issue they choose within hours of the decision to push that issue, all made possible by a collusive mainstream media. This organizational structure has allowed the democrats to run rings around the republican party, literally. This is how Blumenthal sees the world. He is a power player inside the Democratic party, he’s near the top of the heap.

But what he, and almost every democrat doesn’t see, is how blind they have become to the obvious. Since they have to tow the party line creative problem solving, for the betterment of all, goes by the wayside. This is why Blumenthal’s stance on energy is so ridiculous. What has he offered to people of CT in this debate?

“Blumenthal said he wants to keep working to reduce energy prices ahead of the winter months, citing efforts to seek additional funding for the Low-Income Home Energy Assistance Program,”

“He said he has also urged President Joe Biden to release more barrels from the Strategic Petroleum Reserve to help lower costs.”

Is that it!!? Is that the best the Democrats have to offer (remember he is part hierarchy and really can’t expand beyond allowed talking points).

Most concerned CT and US citizen who sought out what is actually happening (by not consuming legacy media) recognized the damage done by rolling back the Trump economic policies and imposing the Green new deal. They understand this simple cause and effect. They understand that to get back on track the US needs to get back to the energy independence we experienced under Trump. They understand it’s not hard to do. They are baffled by democrats who don’t get this.

Love him or hate him under Trump the US economy hummed, virtually everyone had a job, the world’s loose cannons where keep in check, gas was under $2.00 gallon nationally, and we were well underway to re-shoring our long-lost industrial base and by so doing rebuilding the American middle class. Hard to understand why that is considered “extreme”.

The silver lining of the past two years was the American public got to see the glaring deficiencies of the Democratic party and the Establishment Republicans who put party(s) before the people.

If you want more of what we’ve experienced over the past two years than be all measures vote democrat. But if you want change and to put the US back on track again, I recommend you “vote the bums out”.

That’s all the Democrats have to campaign on. The economy sucks. Inflation is out of control. Interest rates have increased dramatically. Criminals have more support in Congress than law enforcement. Russia is more emboldened than ever. China has no fear of the US. Wars are breaking out all over out of lack of respect of US foreign policy. The only thing the Democrats can rally around is abortion rights.

Michael, if you say the Democratic Party is “monolithic” (and you just did) you haven’t been paying attention; and Bernie Sanders and Joe Manchin would certainly not agree with you.

Ken, Sanders is not a Democrat, he’s an Independent.

From where I sit Manchin and Sinema are tolerated as it gives the D-Party some cover on how ‘tolerant’ the left is. But the voting records of both speaks for itself (89.1%/94.5% voting with Biden). I don’t think you will see much free thinking from these two.

What is alarming is the D-leadership and the mainstream media keep telling everyone how violent the MAGA movement is, and that it will destroy democracy. This is all noise to distract you from the signal.

The signal is the main plank of the MAGA movement – Free, fair and transparent elections so every American Citizen can have faith in the election. That’s it.

Note the word ‘every’. What is extreme about free, fair and transparent when it comes to elections?

The polls and early voting are clear, more American Citizens are filtering the noise and hearing the signal. They are engaging in the democratic process.

The Democrats and establishment Republicans are scared to cede back control of government to the people. They are spinning that as a threat to democracy. But is it?

I for one never bet against the American people.