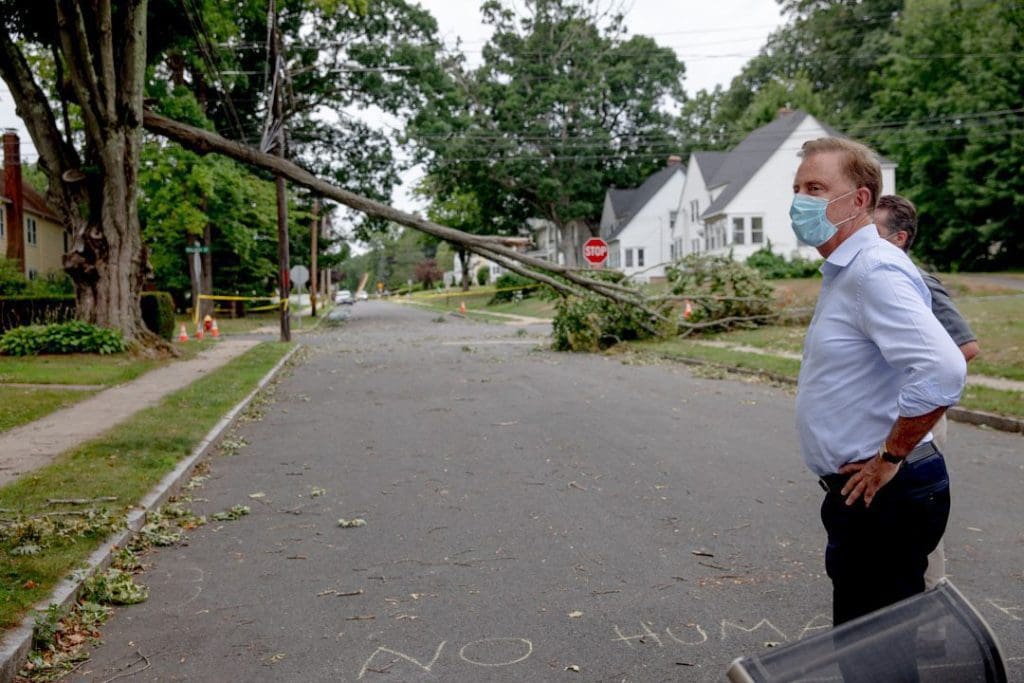 There was a quick headline at the start of Monday’s regulatory hearing into Eversource Energy’s colossally ill-timed electric rate adjustment: U.S. Sen. Richard Blumenthal said it’s time to considering breaking up the monopoly.

Eversource stock dropped from $85.76 to $84.40 at 10:25 a.m., just after Blumenthal and Gov. Ned Lamont spoke to the Public Utilities Regulatory Authority. It rallied to close at $85.88, but its reputation with regulators, elected officials and ratepayers is unlikely to rebound so easily.

Typically a non-event, the mid-year rate adjustment coincided with a COVID-19 pandemic that is keeping workers at home, plus a heat wave. The two factors increased residential electricity consumption. Then came Eversource’s blundering response to Tropical Storm Isaias.

About 800,000 Connecticut customers lost power, leaving elected officials to argue over whether Eversource’s biggest failing was its lack of preparedness, its slowness in restoring power, or its unwillingness or inability to communicate with consumers and officials.

Sharply higher bills and a prolonged blackout are a volatile combination — especially in a state with some of the highest electric rates in the U.S.

“I think the time for tinkering is over,” said Blumenthal, the first witness Monday before the Public Utilities Regulatory Authority. “We need to think big about becoming smaller, more responsive and smarter about the way we do public utilities and deliver power.”

Without endorsing a breakup, Lamont generally concurred with Blumenthal’s call for bold action, especially a review of the rate of return Eversource has been enjoying on its regulated role in the electric market. 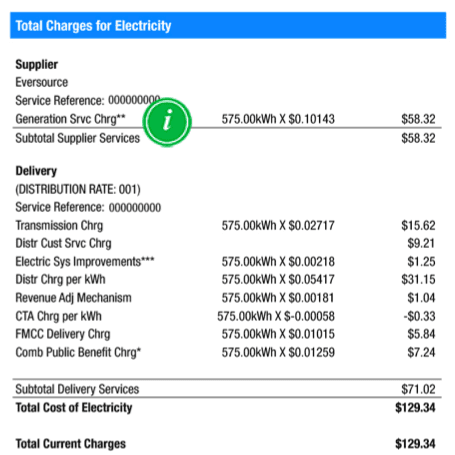 There is a lot that goes into a monthly Eversource bill. (Eversource)

“What happened to us a few weeks ago is a moment that you do not want to go to waste. This is not a time to just speak out and go back to business,” Lamont said.

But breaking up Eversource or United Illuminating, the smaller of Connecticut’s two utilities with geographic monopolies controlling the delivery of electricity, would require a revolution in a state whose regulatory culture has been one of plodding incrementalism.

It’s not a new idea. Frustrated by the failure of electric deregulation to deliver lower prices, lawmakers asked the Office of Legislative Research about its feasibility in 2011. The cautious answer was that a breakup is technically possible, if not endlessly complex.

Breakup or other forms of revolution were not on the PURA agenda Monday, but rather an exploration and explanation of what goes into the setting and adjustment of electric rates that have been a product of a complex and opaque process for decades.

Over the course of an all-day hearing conducted via Zoom, the video conferencing tool that is a ubiquitous feature of pandemic life, two things became clear: Eversource is facing cold anger from PURA’s new leadership and unrestrained fury from elected officials.

Marissa P. Gillett, the new chair of PURA, had already begun assessing what Connecticut ratepayers have gotten for their money since major storms trashed the grid in 2011 and 2012 when Isaias struck, the lights went out, and Eversource’s chief executive fell mute.

Blumenthal, Lamont and more than a dozen other elected officials lined up Monday, waiting their turn to verbally swing at the irresistible political piñata that Eversource has become since the arrival of hefty July electric bills and the departure of Isaias.

The comments ran along the lines of those offered by Rep. Gail Lavielle, R-Wilton. She said as a former chief executive of a marketing company, she is well aware of the rules of crisis communication.

“And Eversource broke every one of them,” Lavielle said. “Above all, do not hide the company’s chief executive officer. His absence was shocking, and it remains unexplained.”

Jim Judge, the Eversouce chairman and chief executive, has agreed to testify Thursday before the legislature’s Energy and Technology Committee, which is reviewing the rate adjustment and storm performance with an eye toward changing the laws that dictate how Eversource is regulated.

The focus Monday was narrow: An examination of certain “delivery rate components” that factored into rate adjustments that took effect on July 1, a process that requires no vote by the regulators.

PURA, however, has since ordered a suspension of the rate adjustment.

“The intention of the Authority’s reexamination of the administrative adjustments is to ensure that Eversource is not over-collecting revenues in the short term at the expense of ratepayers during this period of financial hardship,” it said in the notice for the hearing.

Gillett made clear her displeasure with Eversource’s public suggestion that the rate adjustment was the result of a review and formal approval by PURA.

She asked Douglas Horton, the Eversource vice president for distribution rates, if that description was accurate.

He replied that it was not.

Penni McLean-Conner, the senior vice president and chief customer officer at Eversource, said that the rate adjustment “came at the worst possible time,” and she acknowledged realizing “in retrospect” the company’s communication was “insufficient.”

But Eversource did not waver on one point: The outrage over the July electric bills were primarily the result of higher usage, not higher rates. Residential electric usage increased 36% from May to June and June 2019 was 26% higher than June 2020. Eversource said that trend continued into July.

Eversource residential customers currently pay 23.8 cents per kilowatt hour for electricity, the highest in New England and close to double the national average.

Only a portion of the electric bill is directly controlled by Eversource or regulated by PURA.

Electricity is a commodity that Eversource buys on a market that often is described as deregulated, though its parameters are set by state laws and federal rules. Its cost is passed on to consumers by Eversource without markup. The cost of power currently accounts for about 30% of a residential electric bill.

Transmission from power generators on high-voltage lines accounts for 16% of the bill, the cost of which is regulated by the Federal Energy Regulatory Commission, not PURA.

Delivery to homes and businesses by Eversource on its grid accounts for 34%. The cost of maintaining that system, distributing the power, and producing a reasonable rate of return for Eversource is regulated by PURA through detailed proceedings that set its rates.

The remaining 20% is the cost of so-called public benefits, such as funding for renewables, energy efficiency programs and assistance for the poor.

At issue Monday were the calculations behind two esoteric elements of transmission costs, one is the “transmission adjustment clause,” or TAC charge, that accounts for variables that could only be estimated when the rates were set.

The other is the “federally mandated congestion charges,” essentially what customers must contribute to support the transmission system overseen by the federal regulators.

One aspect briefly debated Monday was the impact on electric bills of a state law setting favorable terms for the purchase of power from Millstone, the nuclear plant in Waterford that is the region’s major source of carbon-free power.

Millstone’s power is relatively cheap when the cost of other sources is high, but it is more expensive in times of low demand, such as now.

Sen. Matt Lesser, D-Middletown, said the Millstone law contributed to the higher costs. When Rep. Kathleen McCarty, R-Waterford, got her turn to testify, she said Millstone must not be a scapegoat.

“I think the time has come to stop pointing fingers,” she said.

Eversource could only hope that is the case.

Eversource has been lying for a long time about Manresa; refused to fix a year long gas leak at Washington village and provides the highest cost due to layers of costs. What would breaking them up serve? Nothing. Forcing the Green New deal down are throats without our input will make us leave. One of my neighbors had a $17 bill after he moved with a $47 delivery charge. We need to connect the grid to other States through the power lines going through Manresa. Buy heaper electricity from Ohio, and re-route from a new data center. If Manresa was renovated, the newer technologies would save us $40. Millstone adds 20% for clean energy. Compensating the Senator leads for favorable decisions just to him and his pay for play.

Blumenthal is a white privileged idiot who married well. How could a financially broke state buy out a company worth billions? Our STATE regulators AND elected overseers (one right here in Norwalk) have let us down. It’s a circus for the media minutes. I hope something is getting done behind the scenes.

Yes, the rate adjustment is usually a non-event, but in this case the bills are coming due for all the green energy projects the Democrats have cooked up in the last couple of years. This is the real reason for the giant price hikes, but I don’t see that emphasized anywhere.

@Allen is spot on. The legislature was warned that their environmental goals would necessarily force bills to skyrocket. They were advised to take a more measured approach to phase things in and out. Here we are. Their investigations should begin and end with a pocket mirror.

It’s obvious that the Democrat party has controlled our State for too long. I’m not saying that Republicans will solve all of our problems, but Democrats are responsible for them.