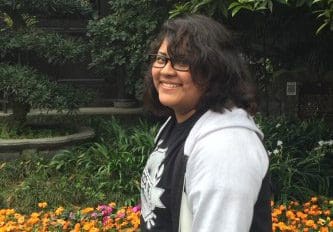 Sher Enriquez, as shown on a Center for Global Studies Facebook page.

NORWALK, Conn. —A Norwalk young person’s life has been cut short by COVID-19.

Sher Enriquez graduated from Brien McMahon High School in 2017, according to a Facebook post. She worked as a desk attendant at Bowlmor Lanes, a job she had held since September.

“Sher was only 21 with the whole world ahead of her. After a long battle with COVID-19, Sher passed and went to heaven. Sher leaves behind family and friends who love and miss her,” Miryam Enriquez said on a Fundly page posted Friday said.

Enriquez “had been seriously ill for several weeks due to COVID-19,” Center for Global Studies Director Julie Parham said on the CGS Newsboard Facebook page.

“She was a lovely, sweet, artistic young woman who brought much joy and kindness to our little community. We are lucky we had a chance to spend four lovely years with her. Godspeed, Sher. Our hearts are with you,” Parham wrote.

Enriquez hailed from Stamford, her Facebook page said. She had two nicknames: Sher and Chairnobyl. All of her paychecks went to attending concerts, she joked. Other posts indicate she like Doctor Who, and she referred to herself as a “fandom veteran.” She had previously worked as a front desk receptionist at Velo-CT.

In February, Enriquez announced that for her birthday she wanted people to donate to Planned Parenthood. In 2017, announced support for DACA.

A person responding to Parham’s post called Enriquez, “A beautiful soul that will forever be missed.”

The Fundly page had raised $6,436 toward Enriquez’ funeral expenses, at 4 p.m. Friday.

“Sher was an amazing swim instructor w/ my children. She will be missed,” one person wrote.

“Worked with her for a few months, she was a very sweet and nice girl. So sad to hear this!” another said.

“Sher was a good friend of mine that I know from high school,” another wrote. “It is not fair that she was taken from this world at a young age.”

I remember her from Bowlmor. So sad. I’m so sorry for her family and friends. So unfair.

We will miss our lovely Sheryll so much. Please if you can help in any way help us raise funds for her funeral.

The best, happiest, & friendliest coworker I’ve ever had in my life ❤️. We love & miss you!

My deepest condolences to the family and friends 🙏❤️