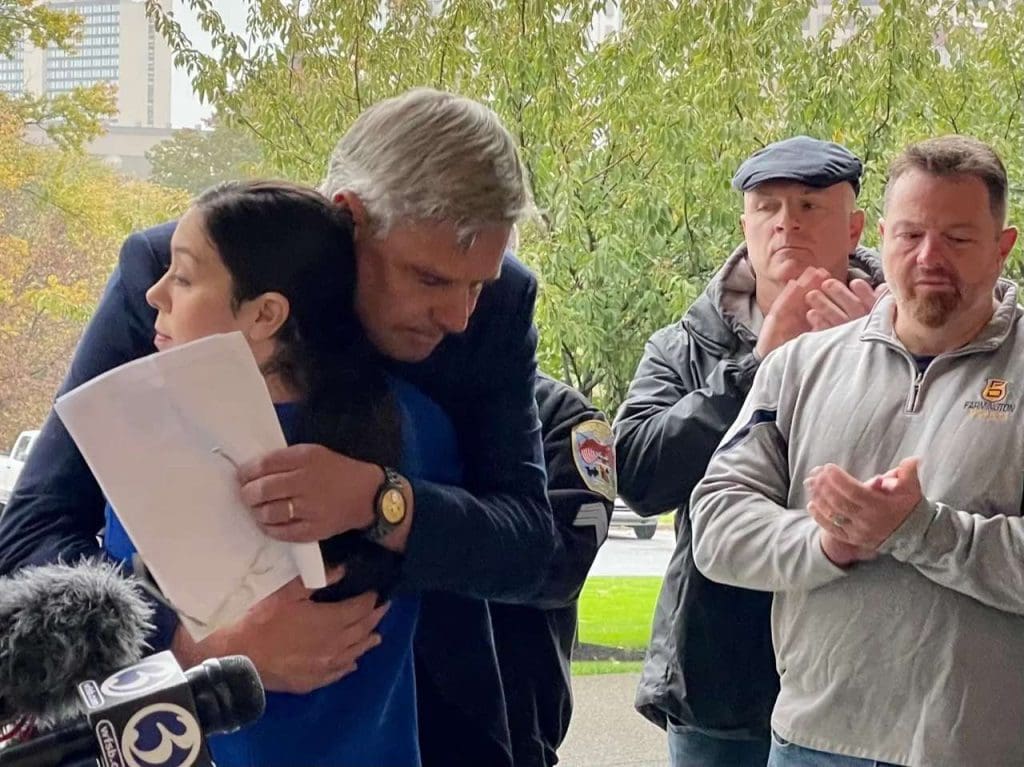 Republican gubernatorial candidate Bob Stefanowski invoked the memories of two murdered Bristol police officers Monday during an emotional campaign event outside the state Capitol as he claimed that police are endangered by Connecticut’s police accountability law.

Stefanowski did not directly blame the deaths of Lt. Dustin DeMonte and Sgt. Alex Hamzy on the law passed in 2020 as America convulsed over the videotaped police killing of George Floyd in 2020, and Stefanowski initially said he would not focus on the slain officers “out of respect to the families.

“But I’ll tell you, anybody sitting at that funeral for Officer DeMonte and Hamzy on Friday, and seeing them and their families walk in, if you tell me that keeping police officers safe is not your No. 1 priority, you ought to move out of this country,” Stefanowski said.

Democrats quickly accused Stefanowski, who has made crime and the police accountability law centerpieces of his campaign, of trading on the grief and outrage over fatal shootings of the two Bristol officers ambushed after responding to a 911 call.

“I was disgusted to learn that Bob Stefanowski is attempting to politicize the horrendous murder of two heroic law enforcement officers just days after they were laid to rest,” said Norwalk Mayor Harry Rilling, a Democrat and former police chief. “These police officers are heroes and deserve more than being used as political pawns.”

Stefanowski and his running mate, Rep. Laura Devlin of Fairfield, signed a placard pledging to repeal portions of the accountability law relating to immunity for police from lawsuits, tighter use-of-force standards and restrictions on warrantless searches, even if consent is obtained.

He challenged Gov. Ned Lamont to make the same promise.

Joined by police officers and their families, the candidates spoke to reporters after Kris O’Donnell, the wife of a Farmington police officer pinned to his cruiser by the vehicle of a fleeing suspect, tearfully called the accountability law “an act that nearly cost my husband his life.”

“You know the problem right now? Cops have to wait ’til the criminal shoots before they do anything,” Stefanowski said. “You really think two months later, they got a split second to make a decision, you really think three months later, some panels from somewhere should be sitting down and deciding whether this officer did the right thing or not?”

All police shootings are examined by an Office of Inspector General created in the accountability law. Previously, they were reviewed by a state’s attorney.

The standard for deadly force is not a ban on firing until fired upon, as Stefanowski described it. Under state law, police can take a life when they reasonably believe it necessary to protect themselves or others from imminent harm.

The accountability law narrowed the standard for using deadly force to make an arrest or stop an escape: An officer should exhaust reasonable alternatives and reasonably believe that firing on an escaping person creates no substantial risk for a third party.

The law passed on nearly party-line votes and was signed by Gov. Ned Lamont. 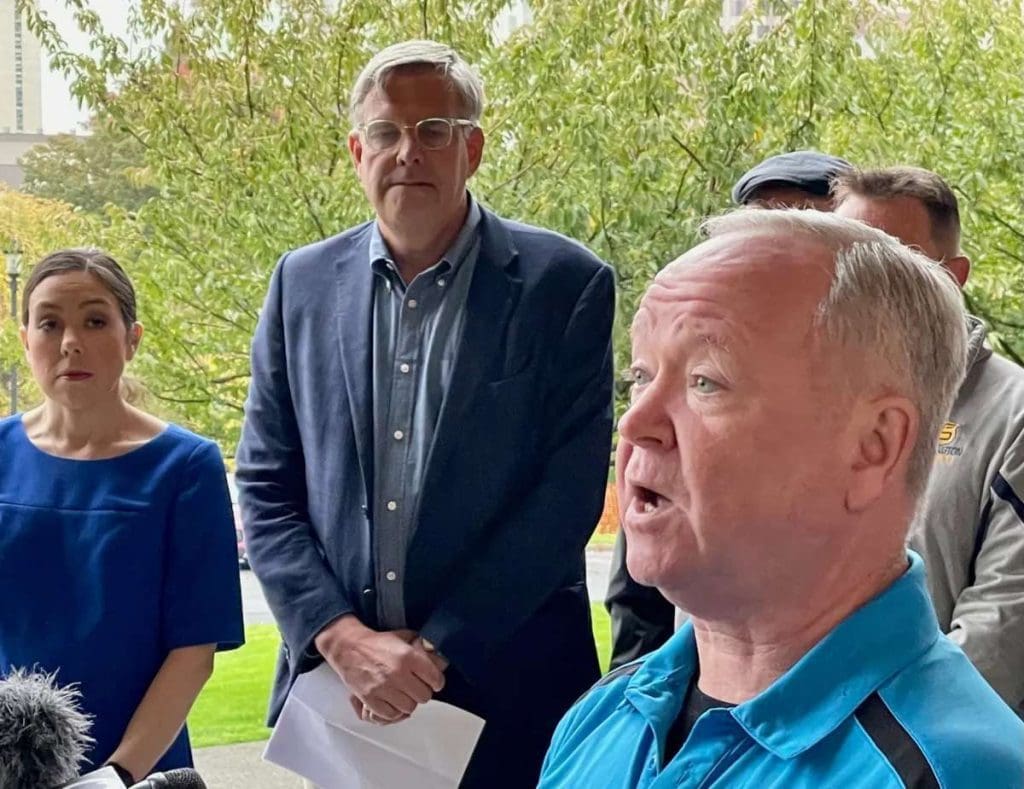 Bob Stefanowski listening to John Krupinsky, president of the Fraternal Order of Police. At left is Kris O’Donnell, the wife of an injured police officer. (Mark Pazniokas, CTMirror.org)

John Krupinsky, a Danbury detective sergeant and president of the Connecticut Fraternal Order of Police, which has endorsed Stefanowski, said the limits on searches and how police act during motor vehicle stops are too restrictive.

“We can no longer talk to the passengers of the vehicle, ask for ID, ask what you’re doing,” Krupinksy said. “They can be wanted for murder. They can have a gun. They can have a pocket full of fentanyl. They’re getting a free pass under this bill.”

The accountability law was drafted and passed in special session, with negotiation continuing until shortly before the start of debate.

After beginning an overnight debate at 1:19 a.m. on July 24, passage came nearly 8 hours later, with the Democratic majority managing to maintain a fragile consensus. The measure passed on nearly a party-line vote of 86-58, with Republicans opposed to a provision limiting the qualified immunity now enjoyed by police.

The Black and Puerto Rican Caucus successfully defended the provision, telling colleagues that it was an essential element of making police accountable.

On Monday, Stefanowski challenged the press to demand answers from Lamont, even if he refused to answer several questions.

Stefanowski and Devlin had few details on how they would rewrite the police accountability law if given the chance.

Stefanowski hedged on whether he would change a central provision of the law: A duty for an officer to intervene when witnessing misconduct by a fellow officer, a signal failing of the police in Minneapolis during the death of Floyd.

Other officers failed to act during the 9 minutes when Officer Derek Chauvin knelt on the handcuffed man’s neck, ignoring the dying pleas of Floyd and the cries of bystanders.

The Connecticut law creates a duty to stop and report misconduct and exposes officers to legal liability if they fail to do so.

Stefanowski offered no opinion about whether police should have a duty to act, with or without the exposure to legal jeopardy.

Instead, Stefanowski gestured to the police officers behind him and said he was “going to work with this team to figure out the right balance.”

Devlin said the duty to intervene or report might be too much.

“I’m not sure that it is a reasonable requirement,” Devlin said.

The accountability law was drafted and passed as the video of Floyd’s death prompted both peaceful protests and rioting, as well as calls to eliminate or cut police funding.

Stefanowski blames the law for crime and the difficulty in recruiting police. Overall, reported violent and property crime is down in Connecticut, one of the safest states in the U.S., based on crime statistics.

Connecticut Democrats were ready with a rebuttal to Stefanowski, who had announced his plans for a press conference on Sunday. They offered quotes from Rilling and others, accusing the Republicans of misrepresenting data.

“They are creating a false reality to scare and intimidate voters, when data from the state police shows crime is down 30% over 10 years and overall crime is down 3% and violent crime is down 9% over the last 2 years,” said Rep. Geraldo Reyes, D-Waterbury, chair of the Black and Puerto Rican Caucus.

But there is a homicide spike in some cities, notably Hartford.

“Mayor Bronin cut the Hartford police budget by a million dollars. I don’t know how these politicians do it,” Stefanowski said.

Hartford Mayor Luke Bronin agreed to a 3.5% cut in the police budget in June 2020, rejecting calls for deeper cuts from protesters and members of the Working Families Party on the city council.

Funding for the Department of Emergency Services & Public Protection, which includes the State Police, increased from $253.78 million in 2018 to $358 Million in 2021.

Thank You Bob our future Governor for backing and standing behind and up for our heroes in Blue!

Sexual assault and homicide rates are up. Democrats fail to tell you that when they quote “violent crime rates are down”. Assaults and robbery decreases are larger than the murder and sexual assault increases leading to the “overall violent crime rate” being down. But the most serious, being rape and murder are up.
And it is ironic seeing this quote, “I was disgusted to learn that Bob Stefanowski is attempting to politicize the horrendous murder of two heroic law enforcement officers just days after they were laid to rest,” said Norwalk Mayor Harry Rilling, a Democrat “ after seeing all the political grandstanding from Duff, Murphy, and Rilling for gun control after every school shooting.

Unless Bob endorses Ranked Choice, he’s off the table for me.

Vote Lamont on the Griebel-Frank line to send the message that you want to end one-party rule through our hideous two-party system.

With apologies to Lisa and the other Independents, if we have RCV, then you guys will do a LOT better next time around, and I’ll happily give you my “1” vote.

@ David -Oz Griebel only has one box on the ballot – Gov/Lt Gov. You can still vote Independent for everything else!

Is it politicizing something if it’s a matter of life and death? Stefanowski was pretty clear about his platform to undo the disastrous and deadly policies foisted on our LEOs by deranged leftists controlling the statehouse long, long before the recent tragedy.

I guess for those used to politicizing tragedies and outrages, it takes one to know one.

What is more chilling is if you have a different viewpoint, NPD might be dispatched to make sure you aren’t out of control. Recall the Jeff Sessions firing, Dry Dock serving a beer in covid, and Republicans wanting to gather outside at the beach for a meeting. But if your viewpoints align you get an escort to walk over the Yankee Doodle bridge, emergency vehicles trying to get to the Hospital be damned.

Isn’t it common sense that we have to support our police if you want to have safe communities!?😩👍🏼 and if a police officer does something wrong we need transparency and accountability💪🏼🇺🇸 there we solved that problem!🦔✌🏼🥵

@Lisa – Indeed, I intend to vote Independent as much as possible!

Given that my default vote for Democrats wouldn’t affect the election outcome for most of these races, I’m perfectly happy to register my dissatisfaction with the 2-party-system by voting Independent.

But again, this is why we need Ranked Choice. I *can’t* be the only one who has a more complex preference than “Lamont and no one else”. Our first-past-the-post voting system does NOT reflect our voters’ actual wishes, and that’s a HUGE problem!

Homelessness in CT is up 13% from last year to this year. Democrats what have you done? Any explanation?