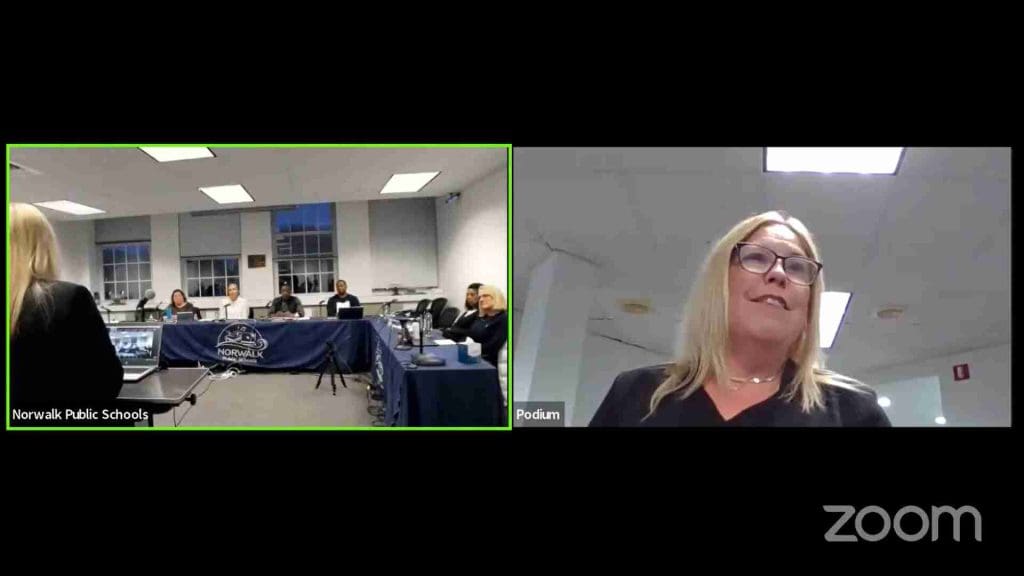 “We got awarded learning labs at three of our middle schools, which is unheard of. Typically, usually, it only happens for one of schools that are part of the Verizon Innovation Program and we were one of the few, I think, only districts that has ever been awarded three labs through this process,” Norwalk Superintendent of Schools Alexandra Estrella said at the April 26 Board of Education meeting.

Roton Middle School didn’t meet the criteria to qualify for the grant, chiefly free and reduced lunch population, she said.

The “multi-million-dollar grant” will allow the three schools to remodel space and create an innovation lab with all of the equipment and tools necessary to really engage in STEM/STEAM practices,” Estrella said, referring to Science, Technology, Engineering, and Mathematics, with the “A” standing for Arts.

Arizona State University, ranked No. 1 in innovation by U.S. News & World Report for the past seven years, partners with Verizon and Heart of America, a nonprofit, in the project, according to the Memorandum of Understanding (MoU) approved unanimously by the Board of Education.

Heart of America “transforms educational spaces into modern learning environments, so students and communities can learn and grow,” the MOU states.

Among other things, Arizona State University will provide technology “aligned to the ASU-provided curriculum and online courses developed by ASU,” and courses for up to 15 teachers per school.

The district’s only cost is for asbestos abatement and, “that’s a fraction of what it would cost to build this facility,” Estrella said.

Asbestos abatement will be done over the summer and the three labs will be complete by Dec. 31, said Assistant Superintendent of Digital Learning and Innovation Ralph Valenzisi. The rooms will be offline for about 90 days and then, “Come January we can start using them… The official program with those with the new curriculum will actually start in September of the next year.”

ASU will provide artificial intelligence instruction and, “We’ll be using it as a robotics lab,” he said. “We’ll be also using it for a lot of design thinking type of pieces that we actually want to build as curriculum for our students.”

“This is an enormous opportunity for a district, particularly when we’re talking about efficiencies and reducing costs. All of the engineers and individuals involved in the design thinking of this process will all be covered by this grant,” Estrella said. “It allows us to improve and build a state-of-the-art facility that is thinking in a in a future-forward way about how teaching and learning will evolve over time. Not only will it enhance the facility, but also provide professional learning opportunities, and all of the hardware and software, including 5G networking, which is one of the most updated and fastest ways of engaging in internet accessibility and programming that there is right now.”

“It’s highly irregular for the board to negotiate with Verizon for things that should occur in the Norwalk Federation of Teachers contract,” she said. “So the agreement includes a stipend; I’m pretty sure that there are ways that we can work forward and regulate that. But it would not be normal for you to be negotiating with somebody besides the teachers on teacher stipends.”

Barbara Wood, who has served as Brien McMahon High School interim principal since former principal Scott Hurwitz’s July transfer to Central Office,  is appointed to the post without the word “interim” in the title.  According to the April 26 BOE meeting packet, she’s been at the school since becoming  its assistant principal in 2007, and has been interim principal since May 2021.

“This is my 15th year, and I couldn’t feel more joy to get the opportunity to lead the institution,” she said. “We’ve done some magnificent work, and I look forward to the journey; I have a staff that is amazing that supports all children to achieve at high levels.”

Wood “has been instrumental in supporting the pathway development” of the district’s International Baccalaureate (IB) program,” Estrella said. “…I think her trajectory and history in the district speak for itself and the work she’s done thus far as the interim principal has been exemplary, particularly in supporting the school through COVID, and most importantly, and having a forward-thinking approach about the work ahead.”

BMHS rose to the challenge by creating a task force whose members each consulted about 30 students, yielding such initiatives as raffles, weekly Zoom greetings and free t-shirts.  The school’s multi-language learner tracking system maximized participation.

“We have a very comprehensive senior tracking list so that we are constantly looking at the data to make sure we’re targeting the supports to the students who need it,” Wood said. But the highest leverage piece was the “individual coaching provided by those teachers and support people that would go out to homes.”

Board of Education member Kara Nelson Baekey said,“As a parent of a college student myself, familiar with FAFSA, I think what you all come up with is genius. It’s really hard to get myself motivated to go through the whole process of pulling all the documents together and logging in there and dealing with a government website.”

A Norwalk High School corridor will be named after the late Jon Albrecht now that the Board of Education has unanimously approved a request from staff and students.

Albrecht was a dedicated faculty member, NHS Principal Reginald Roberts wrote in a memo to the Board. He died in March at age 55 due to complications of COVID-19 and diabetes, multiple news reports say.

“We would like the plaque to be located in the hallway between the locker room, the wrestling room, and the weight room, an area of the building where Mr. Albrecht spent the majority of his time and made numerous contributions to both the physical education and athletic departments,” Roberts wrote.

A group of staff members is crafting the plaque’s wording and will submit their results for Board review, according to Roberts.

“He dedicated an enormous amount of his time to the students of Norwalk,” Estrella said. “The community would like to honor his numerous accomplishments, particularly in physical education and the athletic program, throughout the many years that he has served.”