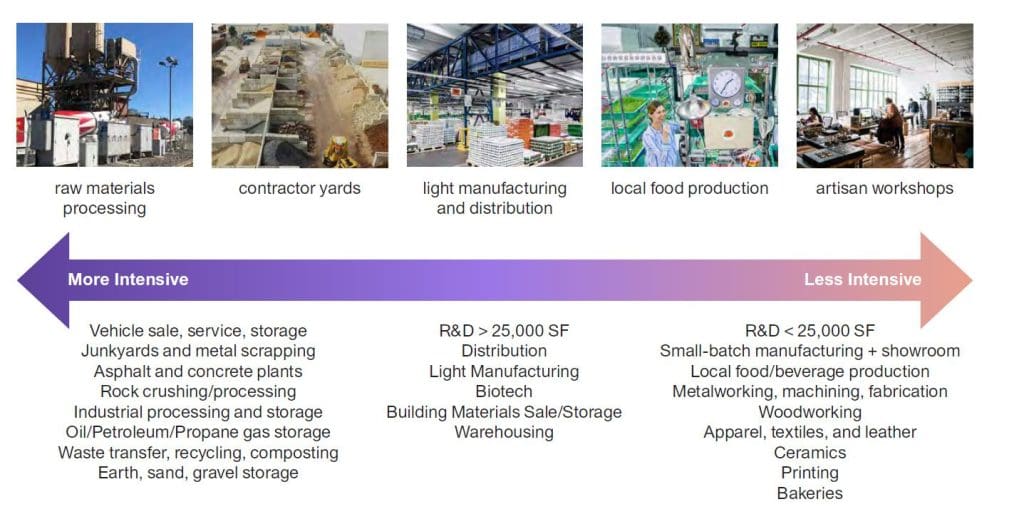 A chart prepared by Utile, showing the intensity and impact spectrum of different industrial uses.

NORWALK, Conn. – Instead of 14 zones in Norwalk that allow industrial usage, there would be four under the recommendations made by Utile, a Boston-based firm hired to do an industrial zone study of the city.

This aligns with the zoning rewrite that’s underway, which should result in considerably fewer zoning districts, Utile said in the study, released Oct. 1.

The four major recommendations are:

Utile began work here more than a year ago as the winner of a $100,000 contract. Rather than folks with a long history of working with Norwalk, Utile was new to the city, “bringing fresh eyes,” Common Council member Darlene Young (D-District B) said.

The work began with a survey that invited citizens to agree or disagree with concepts. It was meant to be “an interactive discussion where the response changes based on responses,” Planning and Zoning Director Steven Kleppin said. 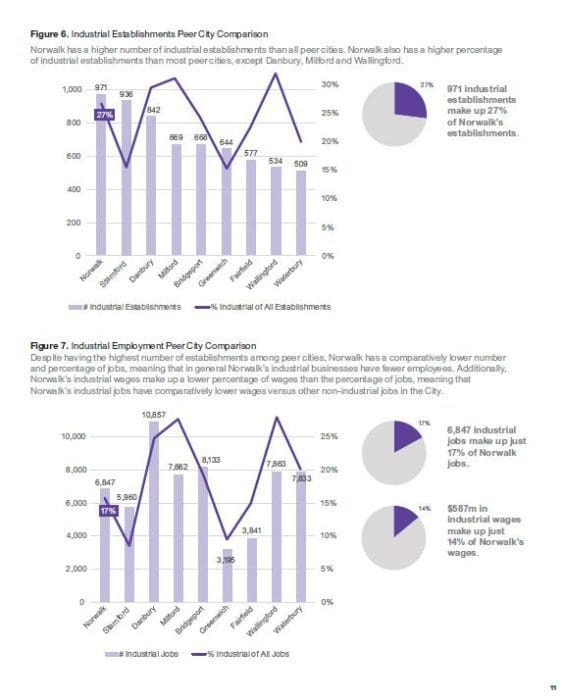 Utile explains, in the resultant analysis, that Norwalk has more industrial businesses that “peer cities” but fewer industrial jobs, therefore getting less economic benefit for a similar level of industrial development. “This suggests that a more deliberate approach to cultivating mutually beneficial industrial development could yield great results,” Utile states.

While many people hear “industrial” and conjure images of large factories and all their unpleasant side effects, “the nature of urban industry has shifted,” and is much more nuanced, Utile states.

“They include emerging niche markets (like brewing and distilling, food businesses, specialty building products, and artisanal fabrication), research and development, showroom and distribution space for wholesalers, e-commerce and last-mile fulfillment, and service-focused heavy commercial (like auto repair, industrial service businesses such as contractors, commercial laundry, property management, etc.) that are vital for the economic wellbeing of a region,” Utile states.

Utile continues, “Heavier industries in Norwalk, such as concrete plants and metal scrap yards are unlikely to grow given land values and the space demands for such industries. Conversely, light manufacturing, light industry, or research and development can be a significant engine for economic development in cities. At a smaller scale, encouraging artisanal and boutique manufacturing, such as bakeries, textile production, and ceramics; can support local makers, enrich mixed-use neighborhoods, and activate the ground floor where retail is not viable.”

Statistics show Fairfield County is aligned with broader trends, as manufacturing firms tend to be smaller and require less space than they have historically, Utile states. Recent sales show a demand for smaller spaces. 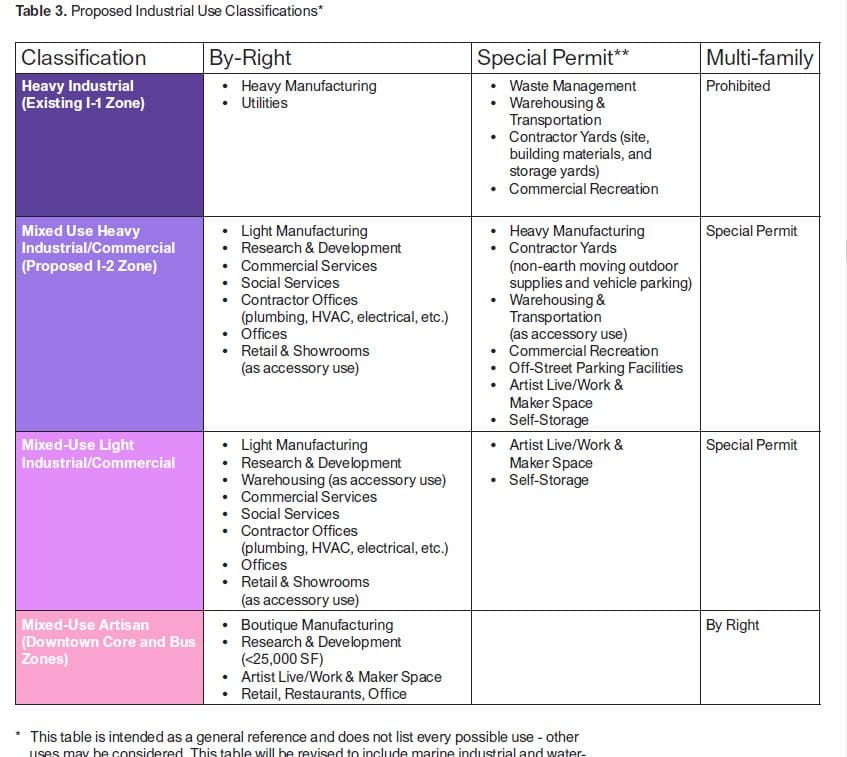 “Industrial spaces generally require higher floor-to-floor heights to allow for increased mechanical, electrical and air handling on each floor and to make it possible to use specialized equipment inside these spaces,” Utile explains. “Additionally, it is critical that the height limits allow for multiple stories of market-rate upper floor uses such as office, lab or residential that can help to cross-subsidize the ground floor manufacturing uses in mixed-use buildings. Manufacturing uses contribute to a vibrant economy and character but typically don’t produce high enough rents to support new construction in urban areas with higher land values.”

A Mixed-Use Artisan zone in the downtown core and business zones would allow boutique manufacturing uses, such as sewing/textile production, bakeries, beverage and spirits production, ceramics, and artist live-work spaces.

“The Mixed-Use Artisan areas are located in areas of the city which already allow boutique manufacturing either by right or by special permit. These areas are inherently mixed-use neighborhoods with retail, office, and residential uses,” Utile states.

The Mixed-Use Industrial/Commercial zone would limit business “to predominantly light industrial and light manufacturing uses, as well as research and development, limited warehousing, and other industrial services,” Utile states. “Non-earth storing and processing yards” would be permissible, “as well as limited supportive and compatible residential. These uses are located in areas of the city that are already well connected to transportation corridors that provide easy truck access with minimal residential traffic conflicts.”

Mixed-Use Heavy Industrial/Commercial zone would be primarily areas currently zoned Industrial 1 or Restricted Industrial, and might include some areas of business and residential zones that contain nonconforming uses, Utile states. Norden Place should be put in this category.

Maps provided in the study show that some South Norwalk neighborhoods now zoned as Industrial 1 would be shifted to residential zones, under the recommendations. Mixed use districts would become mixed use artisan.

The shift from mixed use to mixed use artisan would also happen off East Avenue. Much of the central business district between Main Avenue and Route 7 would shift to mixed use heavy industrial, while the area along Main Avenue itself would become mixed use light industrial.

While four stories are allowed now along East Avenue and the Central Business District, the artisan designation would “allow some flexibility in the maximum overall height, which allows ground floors to be the appropriate height for both boutique manufacturing and ground floor retail while accommodating three floors of either residential or commercial use.”

The waterfront hasn’t been included in the recommendations, as Utile plans to study it further.

The reaction to a proposed distribution center in Norden Place reflects the inherent challenges in developing the parcel, Utile states.

“While there is currently an active data center at the Norden Place site, it is possible more data centers will pop up in the area, and other industrial zones in Norwalk in the future, if we allow them to,” Utile states. “In March 2021, Governor Ned Lamont signed legislation offering tax incentives to certain data center developments. Under this legislation, the state will waive sales and property tax obligations for 20 years for data centers that invest at least $200 million in Connecticut, or $50 million if the facility is located within a state-designated enterprise zone. It will be important for Norwalk to decide if we want to capitalize on this incentive.”

Utile recommends changing the definitions of contractor yards and limiting self-storage locations. Contractor yards should be allowed on major traffic corridors and close to I-95 access, with appropriate buffering from residential areas.

A final draft will then go to the Common Council and the Planning Commission. A public hearing will be part of the approval process.

A page from the Norwalk Industrial Zones Study.

Quote from Utile:
“Mixed-Use Heavy Industrial/Commercial zone would be primarily areas currently zoned Industrial 1 or Restricted Industrial, and might include some areas of business and residential zones that contain nonconforming uses, Utile states. NORDEN PLACE [emphasis mine ] should be put in this category.“

Heavy Industrial means 18– wheelers. Their only access to Norden is through RESIDENTIAL Areas. F-Utile doesn’t know or acknowledge this. And let’s remember the elementary, middle & high schools. NOISE, AUR, TRAFFIC POLLUTION. Norden is already polluted. Don’t add to it.

Heavy industrial use was wrong for Norden before and is still wrong.

The proposed height limit of 85ft seems excessive for industrial zoning. Norwalk should limit heights so they do my exceed tree canopy height of 65ft. We are not in competition with Stamford. Four stories should be the max height.

At June 21st’s Norwalk Traffic Authority meeting, Mayor Rilling and his fellow NTA members discussed in depth a letter I’d written about constant traffic issues and increased truck and tractor trailer traffic on East Avenue, Fitch Street and Strawberry Hill Avenue. I asked for more extensive study of the traffic patterns via traffic cams, and asked that some EN residents be able to view findings alongside city officials. My letter questioned how a state designated, “Safe Routes to School” road could be approved by them and the state (?) as even a temporary truck detour route for the upcoming Walk Bridge Construction Project, after our community fought so hard against the 10 Norden Place applicants to prevent the safety and environmental hazards large truck traffic wouid pose to families and children walking to school. I asked, wouldn’t their approval condition more large trucks to use the route after the temporary detour had been lifted, defeating the purpose of East Norwalk residents’ hard, exhausting fight to oppose?

I looked in the minutes of the subsequent Norwalk Traffic Authority meeting to disappointingly find that my letter had been heavily redacted for the approved record, with my concerns about our children walking on Strawberry Hill Avenue as a truck route, and with other key issues regarding inadequate traffic study, and that I was almost struck on three different occasions by tractor trailer trucks at East Avenue and Fitch Street, omitted.

In this same meeting, a solution (?) was discussed by NTA members to allow tractor trailer trucks a wider turn radius onto Fitch Street from East Avenue by painting the lines farther back on Fitch, which was quickly done. So instead of discouraging tractor trailer trucks from traveling on “Safe Routes to School” designated Strawberry Hill Avenue, or maybe suggesting it a No Truck Zone after the community pushback on the 10 Norden Place applicant, Mayor Rilling and his fellow NTA members enabled tractor trailer trucks to go where they clearly don’t belong. The strange part is, right after the lines were repainted as a result of the discussion at the meeting, The Hour put out a specific story about the intersection of East Avenue/Fitch, where the city promoted that the repainting of the lines to set back traffic was to encourage cyclists and to keep pedestrians safe. No mention about the original reason captured in the June 21st NTA Zoom meeting, for obvious reasons. How disingenuous.

I bring this June 21st Norwalk Traffic Authority meeting up as pertinent to this story, which covers how 10 Norden Place is zoned and what businesses can reside there according to regulations, because at about the meeting’s 25:17 mark, Mayor Rilling states about the Norden Place parcel, “I know that they’re going to be having a pre meeting with the owner of that property for something that is a lot less of a situation, where they’ll have a lot less traffic going by, so we’ll stay tuned for that…” Here we are in October, weeks before an election, and we’ve heard nothing about a pre meeting which possibly took place over the summer. Why is that? Maybe NON can dig in and see if there is a proposal being discussed for 10 Norden Place to unearth. I’m sure lots of East Norwalk residents would be interested in knowing what plans are in store for the controversial parcel before they go to the polls on November 2nd. Here is the link to to June 21st NTA meeting: