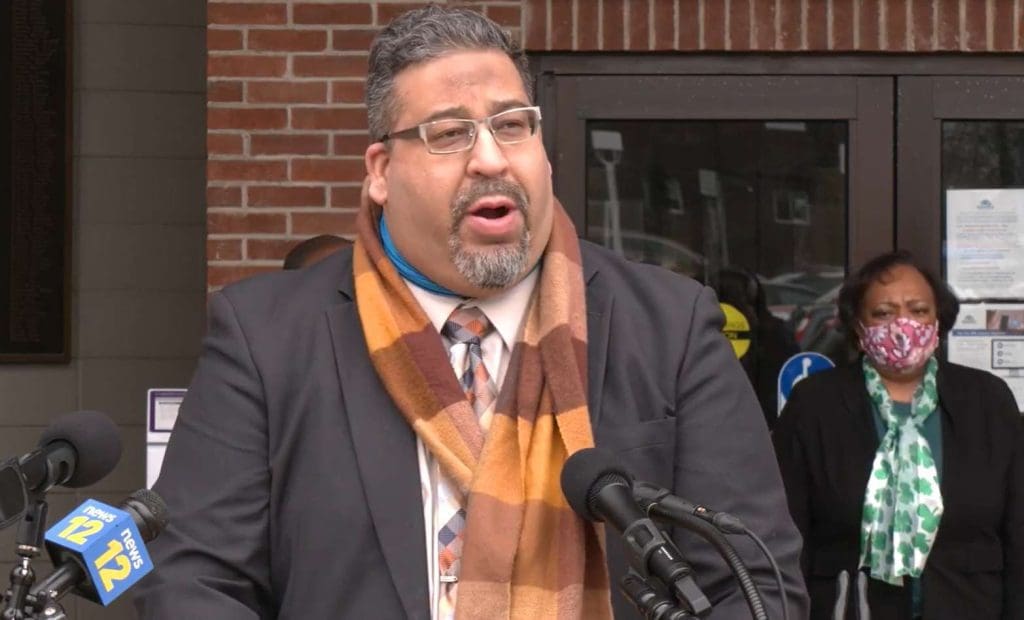 NORWALK, Conn. — The Equity and Justice For All Commission can get off the ground now as the City has found a consulting firm to guide the initiative, announced eight months ago.

“Today is about fostering a renewed vision to create that sense of community and belonging, increased trust, understanding, connectedness, and respect among all people from different backgrounds and experience who have chosen to call Norwalk their home,” Norwalk Chief of Social Services Lamond Daniels said Wednesday, announcing that Kelvin Ayala of the Bridgeport-based Led By Us & Associates has been given the job.

“When we first saw the RFP, what we saw was a community and a municipality, willing to engage in some very difficult conversations. And that’s why we’re here,” Ayala said.

Many have asked where the Commission is, as Daniels and Mayor Harry Rilling announced June 24 that it would be formed.

Back in June, Daniels emphasized a need for “experts at the table,” the reason behind the plan to issue an RFP (request for proposals) for organizations with a proven track record of doing this type of work. He also said that bringing in a consultant will help deliver on  Rilling’s commitment to the Commission and bring in research and data.

“I want someone to come in with a fresh set of eyes who can listen,” Rilling said in June. “I want neutrality. We’re going to make sure this is fair, honest and objective.”

He has recently explained that the first RFP hadn’t gotten satisfactory results and it was reissued. Rilling was not at Wednesday’s press conference because he threw his back out, Daniels said.

“Led By Us & Associates is a consulting firm that focuses on responsible urban revitalization. They have engaged, inspired and equipped community stakeholders with the necessary tools and resources and they build confidence to build design and execute them,” Daniels said. “During the interview process, they demonstrated leadership management capabilities, worked with municipal government organizations and exhibited strategic partnership skills and ability to work across functions with diverse communities to synthesize ideas and deliver outcomes.”

“I think that is the thing that impressed me the most about them was their experience with municipal government,” Common Council member Barbara Smyth (D-At Large) said.

“We provide the technical assistance necessary to accelerate the next wave of job creators, property owners, and community investors. In my role, I seek to lead community renewal efforts through inclusion in economic development activity,” Ayala said on LinkedIn.

“There’s a great opportunity here to become a model city just not in the state of Connecticut, but nationwide,” Ayala said. “This type of work is critical for the success of the future and quality of life for many municipalities for struggling to many of the same issues, utilizing its resources such as the city of Norwalk.”

There to support the decision were Juanita James, the CEO and president of the Fairfield County Community Foundation and Norwalk ACTS Chief Executive Officer Jennifer Barahona.

The Fairfield County Community Foundation has committed $50,000 to start the Commission, James said.

“(The) time for studying and reports is over, time to act is now. And the fact that we are focused on action and inclusiveness is a very important part of what we want to do,” she said.

Barahona referred to the disproportionality and equity dashboard that Norwalk ACTS has just developed.

“More disappointing than the numbers that continue to show overrepresentation of students of color in all categories of special education and discipline, and the underrepresentation of students of color and academically talented and gifted programs is that it’s the same trends we saw 15 years ago,” she said. “Enough is enough. It is time for this community to come together and tackle the implicit biases structural racism that exists in our systems that perpetuate these inequities.”

“This is an investment that we are making in this city, in our town, in our people, to make a difference in our community,” Council member Greg Burnett (D-At Large) said. “This will have lasting impact, not just tomorrow, not just next week, but for years to come. It might be even eternity, as far as we know.”

“I appreciate what my fellow Common Council members have said, that this will not be a document that sits on the shelf,” Council member Darlene Young (D-District B) said. “And if we are to be intentional… we have to make sure that we use this as a roadmap and be intentional about making change in this community.”

“Today is indeed a special day, the fact that we can assemble at this time to make this major announcement,” the Rev. Dr. Richard Clarke said. “…We look forward to seeing great things happening within our city, for this is a land of opportunity, and all people need to smile and rejoice.”

Question for our city leaders on the awarding of this contract:
Can someone let us know some of the successes this group has on their resume? I understand their connection with Bridgeport, but is there another municipality that has benefitted from their vision?

I think its very important that we, the Norwalk taxpayers, are given a better understanding what “Equity” means to the Lead by Us team. And more specifically, what did the City mean by using Equity as a core concept, or goal to achieve, in the RFP.

When you consider the often-dramatic shifts/demands made for social change under the guise of Equity you begin to see the potential for far reaching implications and unintended consequences.

This is a very slippery slope Mayor Rilling has putting all of us on.

Norwalk spends $350 m + a year. Schools half of that. Housing is huge spend too. Payouts and beneficiaries is very much from white to non white. Equity?