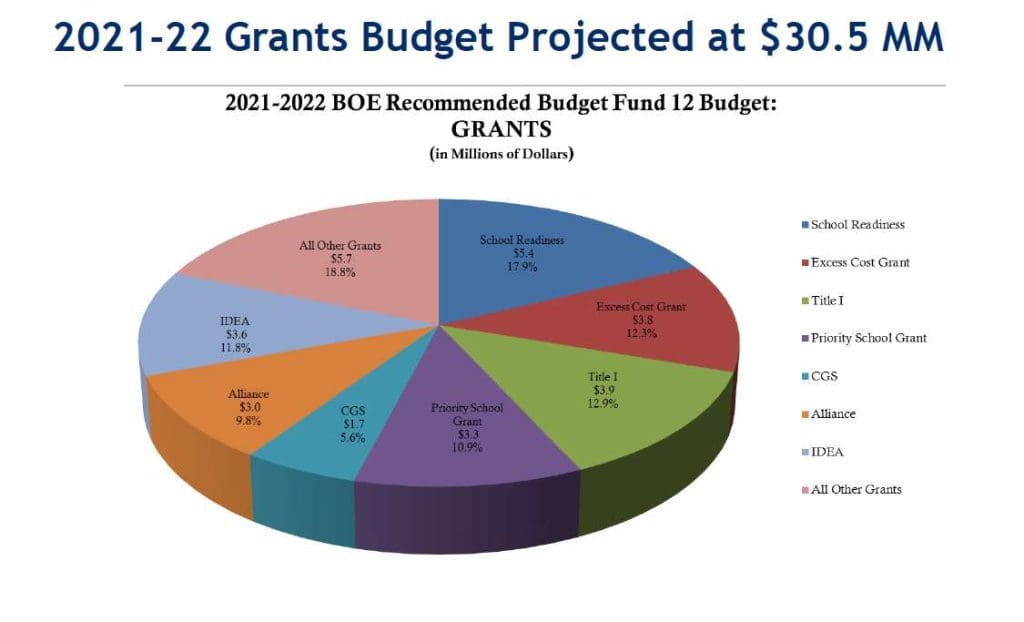 An illustration from Norwalk Superintendent of Schools Alexandra Estrella’s PowerPoint presentation of her recommended 2021-22 operating budget.

NORWALK, Conn. — Board of Education members strategized Wednesday ahead of a Thursday budget meeting with the Common Council, considering details in Norwalk Superintendent of Schools Alexandra Estrella’s recommended operating and capital budget asks.

One bright light: Norwalk can expect 16 percent reimbursement from the State on the expected $7 million Briggs High School renovation expense, should the City go ahead with turning it into a family welcome center and resource center. But Board member Barbara Meyer-Mitchell suggested that Norwalk Public Schools wait a year on the project, emphasizing a need to keep promises made to parents and address important items such as school bathrooms.

“Actually, I heard this from several parents that their children would rather have an accident than use the restroom at their school. And that’s going back 10 years in some buildings,” Meyer-Mitchell said at the Finance Committee meeting.

Feedback on the welcome center idea has been broadly positive, according to Board of Education Chairman Colin Hosten, who said, “Many people have said this is something that has been long overdue.”

Meyer-Mitchell asked about State reimbursement Tuesday, and Estrella had said, “At this point, we don’t know of any reimbursable opportunities.”

On Wednesday, NPS Chief Financial Officer Thomas Hamilton said he’d spoken to Jim Giuliano, the city’s project manager for new school construction, and learned that the renovation would qualify for half the City’s usual construction reimbursement rate as it would be used for administrative purposes, so 16 percent. So the City would have to bond $5.9 million for the project.

“I continue to struggle with conflicting needs,” Meyer-Mitchell said. “… We really are behind the eight ball in our school buildings. I also love the Welcome Center idea and want that to happen. But I’m wondering if we shouldn’t give ourselves a year to fully plan it and fund it perhaps, for multiple reasons.”

She said, “We’ll have a better idea of our revenue streams post COVID. And if we’re, you know restored to the economic glory that we were experiencing.” Referencing the need for space in City Hall, she suggested leasing office space in two locations within a block of the building.

“I think I understand where Barbara is coming from,” Diana Carpio replied. “But I also know that now with COVID and everything that’s coming up. I know that a lot of families feel lost, and they have nowhere to go. So for me, the Welcome Center is definitely a good start, we need to get on that sooner rather than later.”

“I don’t want to create a situation that creates more confusion than what I already heard from constituents” about where they get services, Estrella said. “When we make a decision, it has to be one that is permanent and consistent.”

Meyer-Mitchell speculated that the renovation could take 18 months, but Estrella said the administration had spoken to architects and it could be done eight months after the capital budget is funded.

“But I think is worth waiting a little bit to do it right and for us to effectively message to our families,” Estrella said. “…Also, we’ve already started conversations with our local partners and community organizations around how we can collaborate, to make this welcome center one that that is a central hub of resources, beyond just what the BoE is currently offering.”

Meyer-Mitchell said discussions will reveal how much the City can bonding and what priorities will need to be, “but I want to also really focus on looking at the order and, and the logic behind our facilities work…. it’s matter of integrity when we give our word to a stakeholder community. I feel honor bound to keep our word.”

The Silvermine Elementary School driveway, described as an urgent need last year but postponed for the next budget cycle, is an example, Meyer-Mitchell said.

The budget recommendation calls for $500,000 for the Nathan Hale Middle School bathrooms, but West Rocks and Roton will have to wait. Meyer-Mitchell said they’d all been priorities in November, but a State grant is in question.

“I concur with you with what you’re saying I think environment matters and I think that’s one of the reasons why we have the facility study on its way for us to deeply assess the needs of the district,” Estrella said.

The Silvermine driveway is a priority but is delayed due to COVID, she said. “I just want to reassure everyone… the work will continue.”

“I just want to make sure that we aren’t maxing the credit card before we even get that facility study. And then we leave ourselves no room to maneuver,” Meyer-Mitchell said.

The Finance Committee unanimously approved the recommendation. The full Board is expected to vote on it Tuesday.

Most of the increase is due to items outside the Board’s control, so the actual ask is for a .5 percent increase, Hosten said.

“It’s pretty flat budget so I think that, you know, we’re meeting them more than halfway by coming in at a very, very reasonable amount,” he said.

Health insurance costs are expected to increase by $6,053,909 and contractual wage increases account for more than $3 million.

Hosten asked Hamilton to highlight the cuts NPS has factored into the recommended budget.

NPS plans to save $945,082 by cutting eight positions and plans to “reduce budget for 10 month employees to reflect actual work year,” a “cut” of $545,662. Estrella plans to cut two “chiefs” from the Central Office staff, as well as a lower level administrator. Magnet school funding would be cut $1.5 million.

Hamilton said the overall $3,971,000 reduction includes $50,000 from the district’s expense account, inspired by lower legal costs over the last few years, and “so it’s things like that that are sprinkled throughout the budget” that add up to the nearly $4 million in reductions, in addition to the “pretty straightforward” cut to the $1,000 per pupil allocation that’s been provided to the magnet schools.

The cuts are all “real, you know, absolute reductions,” Hamilton said. “It’s not just a reduction to remove the level of increase in a line item and so on, but an actual reduction from the current year budget. I know we’ve heard from some folks over the years…(who) don’t think that that we ever actually reduce any line items and I think this shows, that’s not the case.”

I have to agree with Barbara Meyer-Mitchell on the bathrooms but wholeheartedly Disagree on 10 years. My daughter is 28 years old and attended Ponus Ridge. EVERY day when she got in the house from school, she ran straight to the bathroom. I don’t know what kind of bladder she had but she swore to never use the bathrooms in school. I tried to convince her so she wouldn’t end up with bladder problems but she refused. I guess the bathrooms have been a problem for a long time.

So….If I understand the Math we will be cutting $4 million of stuff we did in schools this year and next year’s “flat” request is an increase of $12 million…That means to me that we are spending 12 million to get 4 million less of services in schools..Is my logic correct? I’m not a rocket scientist but does anyone else think that’s ludicrous, unsustainable and possibly disingenuous?

Good news, Alma: Ponus finally got new bathrooms and bathroom renovations this summer. Big shout out to Alan Lo and Jim Giuliano for making that happen. I’m so grateful to the superintendent for prioritizing this work.