NORWALK, Conn. – Two-time Mayoral candidate Lisa Brinton announced Thursday that a new political organization, Independents for Norwalk, will launch a “kick off campaign” Monday, June 14, at B.J. Ryan’s BANC House in Central Norwalk. “The public, regardless of party affiliation is invited,” the announcement said. It did not say what time the event is.

Brinton’s press release said she “is seeking and promised to bring an array of independent-minded candidates focused on Norwalk—not the current more hard-lined, two party system—for the expressed purpose of focusing on Norwalk residents, its neighborhoods and city services.” It twice mentions a “slate” for the new group but focuses on Brinton’s thoughts and background, without mentioning what office she might be seeking, if any.

“It’s not about me,” Brinton is quoted as saying. “It’s about we. It’s about residents.”

The release leads by describing Brinton as “an advocate for more professional local government and increased state funding for Norwalk’s over-crowded schools over the years.” It says she “resolved to give residents their voices back by bringing a slate of candidates to the 2021 municipal ballot that will represent the people of Norwalk, not party or special interests.”

Brinton did not respond to multiple emails and a phone call, seeking specifics. Rumor has it she is running for Council at Large. One of the emails asked if that’s correct, and she did not respond.

NancyOnNorwalk was not able to connect with Town Clerk Rick McQuaid to get clarity – is Independents for Norwalk a newly formed political party? Is it a Political Action Committee? Has Brinton filed papers to run for an office?

The State Elections Enforcement Commission (SEEC) website had no information on Independents for Norwalk. 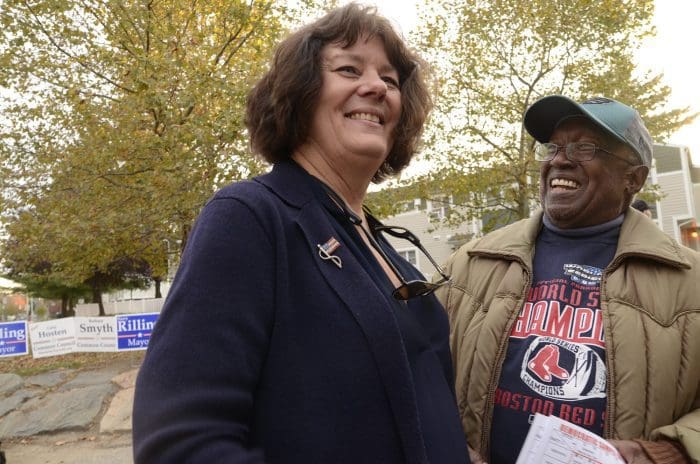 Brinton has twice challenged Democratic incumbent Mayor Harry Rilling, first in 2017 as an unaffiliated candidate in a field of four Mayoral contenders, and two years ago as the endorsed Republican candidate, although she remained unaffiliated.

Her press release refers to her 2019 campaign, in which she received 44.5% of the vote, as “strong.” She has said that although Rilling got about the same percentage of votes as he did in 2017, he actually got 6% less because he faced Democratic former State Rep. Bruce Morris as one of his opponents in that contest, and Morris got 6% of the vote.

After the 2019 election, Brinton formed a Political Action Committee (PAC), UDrive Norwalk. Last fall, she unveiled a UDrive website, offering statistics, many bolstering the points Brinton tried to make in her two Mayoral runs. It’s a dashboard – better than the Mayor’s dashboard, she said, because it offers “benchmark metrics of comparing Norwalk to other cities and towns around Connecticut.”

She said it was not a prelude to another Mayoral run.

In mid-October, the website’s counter reported it had garnered 1,808 visits. Early Friday, the website reported 6,525 visits. NancyOnNorwalk checks it from time to time, and has consistently see it report 20-30 visits per day.

The Independents for Norwalk press release said Patrick Cooper is its treasurer. A Facebook page for the political organization is obviously new, as it had zero followers early Friday.

“In order to address the city’s surge in population, long-term ability to fund schools and city services, while also protecting the city’s natural assets, Brinton wants residents to have another choice on the ballot this November,” the press release said.

Lauren Gray, Rilling for Mayor campaign spokeswoman, responded, “It’s good when more people get involved and participate in the democratic process. Norwalk is heading in the right direction, and we have a strong slate of Democrats, starting with Mayor Rilling at the top of the ticket, to continue moving Norwalk forward as we emerge from the COVID-19 pandemic.”

The press release called Brinton a “25-year veteran of the corporate world and 15-year civic volunteer.”

“By now, those familiar with my efforts over the years, know I don’t care about political parties.  My loyalty is to Norwalk,” she is quoted as saying. “Concentrated power has created an environment where local government transparency and accountability has all but disappeared. Years of private caucus meetings have thwarted public discussion and debate over critical issues like population density, planning and zoning, city services and economic policy. The status quo has immensely benefitted from the pandemic—destroying any balance over city hall’s current power structure.”

The release points out that, “By city charter, Norwalk’s municipal government is designed as a weak mayor/strong council.”

“The 15-member common council is supposed to represent the five specific city districts and their issues, with two voices each, along with 5 at-large members charged with considering the entire city,” it states, quoting Brinton as asking, “Is that what residents see or experience?”

It then criticizes the State legislative districts in Norwalk, although no one at the municipal level has any control over their boundaries.

“The state has also gerrymandered the city such that it has only two exclusive, dedicated state reps for the 137th and 140th districts out of 5 congressional districts,” it states. “Norwalk shares the others, including a state senator with ‘leafy’ (upscale) municipalities that have very different needs.  Other major cities in Connecticut enjoy 4 or 5 dedicated state representatives.”

“It explains a lot of what is happening to Norwalk,” Brinton is quoted as saying.

The election held this fall is for municipal representatives. State representation will be decided in 2022.

“Approximately 43% of registered voters in Norwalk are either unaffiliated or independent, meaning they are not allowed to vote in primaries or have any voice regarding candidates placed on the ballot,” the press release states. “Brinton again vowed that her newly-formed Independents for Norwalk slate will be committed to using taxpayer funds more wisely for the people of Norwalk versus third-party special interests.”

“Long-time residents and homeowners deserve to stay in Norwalk and enjoy the kind of quality of life that such a naturally beautiful and culturally diverse city like ours should offer—provided it is represented by a well-run, professionally managed city government,” Brinton is quoted as saying.

“I expect to meet people who are independent,” he said. “Looks like maybe they want to get the local independent party resurrected.”

Norwalk Democratic Town Committee Chairwoman Eloisa Melendez characterized the press release as “vague” and said it left her with more questions than answers. 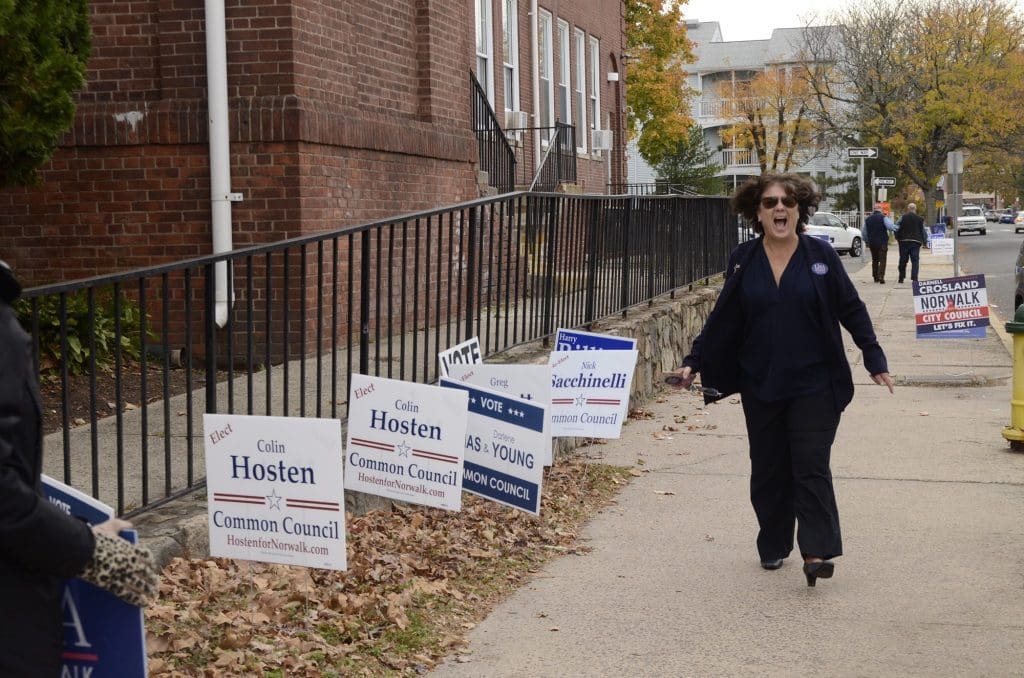 Norwalk has had exactly 1 female mayor in its history, and she happened to be a member of the independent party.

Not sure if Lisa is running for mayor or any office, but all you smart, strong, passionate women of Norwalk now have a proven path to City Hall resurrected.

This city could use a woman’s touch, especially in regard to all of the lawsuits Norwalk finds itself in…

Good for her. Anyone is better than corruption.

THIS is great news! But isn’t the event on June 14?

“It then criticizes the State legislative districts in Norwalk, although no one at the municipal level has any control over their boundaries.”

What the “independent” journalist notes here sums Norwalk up perfectly. The mayor of the 6th largest city in the state that generates over $500 million in revenues for the state and receives less than 10 cents on the dollar of that is completely subservient to the state government’s needs and wants with Norwalk as an afterthought.

Broken traffic signals, insane traffic, roads and schools falling apart in front of our eyes, and a sewage plant about to explode from all the cheaply built apartments going up on every last square inch of land are all the fruits of this servitude, not to mention a few get of jail free cards.

Is any candidate interested in encouraging major firms to bring good jobs to our transient commuter City with a 10% poverty rate where renters now make up 40% of our population ?
Or are they focused on providing “good governance” ?

When Ms Brinton lost her last election running for mayor she said she was tired, had had it, wouldn’t run again. I remember saying yes you probably will, it’s in your blood.
I have always found Lisa interesting, concerned, sincere and likeable. I have agreed with her at times, disagreed at other times, but never doubted her devotion to our city.
I wish Lisa luck with her newly minted Independent Party but can’t help wondering if that is the answer. It seems to me that Norwalk’s problems are more a state issue with the cities coming in second to what Lisa calls the “leafy” suburbs; supporting with services all those who cannot afford million dollar houses and must live in our cities with affordable housing while providing much of the essential workers in those NIMBY suburbs. But who knows. Maybe they can come up with the answers. Not shy about sharing my opinions if asked.

I think the picture at the end speaks a thousand words. I’ll leave it at that.

piberman
Norwalk has many many major firms and is far from a transient commuter City. Also nothing is wrong with renters. All successful cities have renters. It is 2021 not 1950. FYI Landlords still pay taxes on the properties of rental units.

Long overdo, a breath of fresh air and hope in this tone deaf, Democratic monopoly.

Great Lady and concise about what Norwalk needs, I am interested in listening!!

I’ll be sending her money, genuine & upfront! The current status quo, council members, are afraid to cross Harry. How can 14 members all agree each week on ALL issues when the city residents have continue to speak, WTF is going on?

Let’s talk politics and table idealism for a second. Does fracturing the Democratic Party in Norwalk help us in the long run, especially with a Democratic-run state government? I’d say it’s time to get our Democratic ducks in a row!

@Jon. At least they do it for a mere stipend. Our legislators have drawn full salary, plus raises, plus benefits and are going to let Lamont run as a dictator even longer than the current 18 month stretch. We’re talking at least $10 million in salaries and benefits for absolutely nothing. They should have been put on unemployment on the Federal Covid Tab and that money could have been spent on something useful.

Stuart G. A nice summation of the city v suburb theme that gets played out not just in Connecticut, but across America. If only there were no cities! – then the leafy suburbs would be forced to build their own hospitals, create their own cultural venues, offer their own special needs services and build their own big box stores. Is an Independent Party the answer to Norwalk’s woes? I doubt it. IMO, the independent party is a symptom, not a solution.