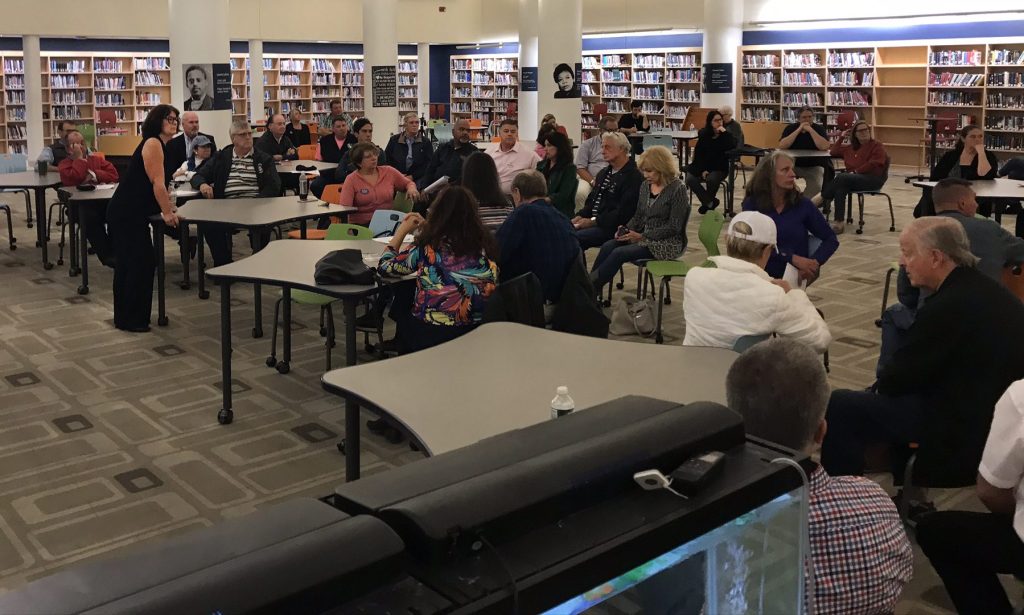 NORWALK, Conn. — Come November, lifelong Democrat Chris Bowers plans to do something out of character: She will cross party lines on Election Day to cast her ballot for Mayoral candidate Lisa Brinton.

“I think that on the local level, it’s not a party issue. It’s about what’s happening in the town. And I think with (Mayor Harry) Rilling, it’s going in the wrong direction,” she said.

Bowers was one of three Brinton fans who spoke to NancyOnNorwalk on Thursday, after Brinton spent two hours in Brien McMahon High School explaining her views to a crowd of up to 50 people, some of them Republican candidates. NancyOnNorwalk caught the last half hour, during which Brinton stressed her business background, explained her position on the ballot and insinuated nefarious motives behind Rilling’s efforts to restart construction on Wall Street Place, commonly referred to as “POKO.”

Rilling, a Democrat, is seeking a fourth two-year term. Brinton is an unaffiliated voter endorsed by Republicans, appearing on that line of the ballot only, a row she called “B for balance.”

“I’ve taken a lot of grief” on the party issue, Brinton said. “They’ve been trying to make this national and I don’t want to offend any of my Republican friends…. I was not able to secure the independent line because there are rules. If there had been a three-way race, I’d have been on the “I” line. Because there is no Independent Party here in Norwalk on a municipal level, I could not be on two lines; there are lots of rules written by the two parties to keep minor parties out.”

A man in the audience said she “sounded more like a Republican than anything else.”

“Well, I’m a businesswoman,” she said.

President Donald Trump is a businessman, “and he’s talking just exactly like you,” he replied.

“I do sound like perhaps a Republican, but let me say something about the parties,” she said, characterizing the party system as having been productive once but, “It’s so hard to get people to serve in public service to deal with the politics within the party system. There is nothing left over for sorting out the city problems.”

Someone asked if “POKO” is a done deal.

Brinton said that as Mayor she would tear up the Land Disposition Agreement, holding Citibank responsible as a businesswoman, and sell the property on the open market. “This is a bad idea that is only getting worse,” she continued, alleging that the issue has gone “quiet until after the election.”

“I would ask the press about whether they want to cover that. But the other is, I think there is a general cynicism of the of the public right now,” Brinton said.

NancyOnNorwalk reported on the McClutchy’s donations to the state party as part of an investigative series in July 2018. Melendez became party treasurer in January and is not running for reelection.

“Right now, we’re in a low ebb, of folks not trusting politicians, and part of what I think the answer to that is, is term limits for everybody,” Brinton said.

One man, who described himself as a die-hard Democrat,” called Brinton “the first candidate that is looking at running the government in a realistic way.” 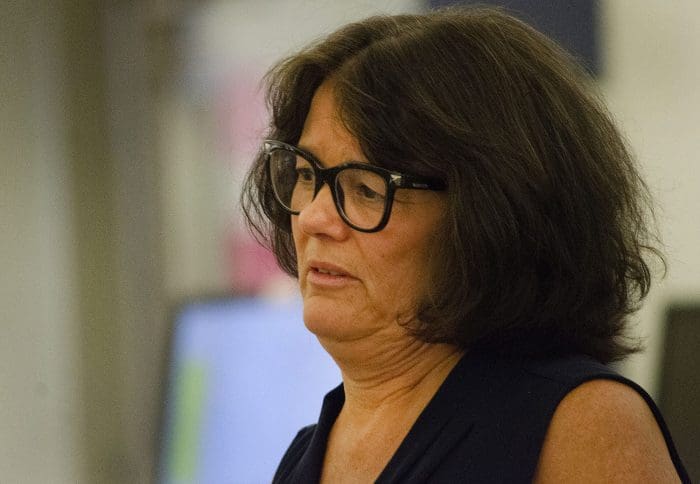 “We have to have courageous conversations right now in this country,” she replied. “And we’re not doing that. People are making a lot of money hurling grenades back and forth. And it just, it serves no purpose.”

An audience member brought up the proposal to push back high school start times, and Board of Education Chairman Mike Barbis explained the issue. Brinton talked about the ramifications in negative tones, citing “unintended consequences.” She said she knew studies show the move has resulted in teens getting more sleep in other communities but the teens who spoke Tuesday predicted that wouldn’t happen, she said. “I think the key is taking the phones away from the kids because that’s what they’re doing. But there are some knock-on effects. And I just think that there’s just been too much going on in this city.”

Afterwards, Caryn Raimondi said she plans to vote for Brinton, just like she did two years ago.

“There’s so many issues,” Raimondi said. She complained about drivers not using bike lanes correctly on Strawberry Hill Avenue, and described a kid doing wheelies as “an accident waiting to happen.”

She’s heard there are 300 apartments going up near her home and “even the parking thing that they instituted over the summer with the beach, and Cranbury Park, that was a cluster bomb.”

People are expected to use a parking app but the wifi is spotty at Cranbury, and “I confronted the mayor on this and he started going he deflected and start talking about other stuff,” she said. “…He may be a nice man But I don’t think he knows a thing about running a city.  You know, it’s one thing to be a chief of police but that doesn’t give you qualifications to run the city as a Mayor.”

Tony Carlo, a Republican, said Rilling “is the first Mayor in Norwalk since Alex Knopp that has never ever returned my phone calls. And I’m affiliated with the Flax Hill Road Association.”

He’s called about traffic and road issues, he said. “It’s just what they’ve done to our neighborhoods. You know, you got West Norwalk, our little area over here. It was kind of countryish. They’ve commercialized everything they want, they want to build Norwalk. First thing they need to do is build the roads because if you can’t build the roads, you can’t build anything because we’re so jammed up. It’s just it’s out of hand.”

“I want somebody who’s going to make a difference, who’s going to rescue our neighborhoods and not destroy them,” she said. “… I’m living in fear of the Walk Bridge reconstruction and the traffic that’s going to result from turning the Pooch Hotel into apartments.”

Brinton plans another community forum from 6 to 8 p.m. Wednesday at Norwalk High School. Rilling and Brinton will come head to head on Oct. 21 in a League of Women Voters of Norwalk candidates forum. The Greater Norwalk Chamber of Commerce plans its Mayoral debate for 8:30 a.m. Oct. 29 in the Norwalk Inn.

Republican-endorsed Lisa Brinton doesn’t seem to have the temperament to be mayor, based on her own long record of snarky comments full of personal attacks anyone can read by searching “Lisa Brinton” on NoN.

Lisa had the chance over many years to prove her ability to show her leadership and collaborative skills and work well with others to get to common goals, by serving on any number of boards and commissions or the Common Council during the many decades she has lived in Norwalk under both R and D administrations, but she had oddly chosen to never serve the public in this capacity but go straight for the top office in the city

I’ve watched Lisa disrupt public meetings for years, with loud interruptions and laughing while others are talking, behavior more worthy of high school than the mayors office.

Lisa Brinton complained at one point that Mayor Rilling and his lovely wife Lucia were showing too much affection in public, which she found disgusting and she let the world know that. Is this the temperament of a mayor?

Does this mean Lisa may ban public displays of affection if elected? It’s not a serious question of course, but who seriously who complains about a married couple showing affection in public? Someone clearly obsessed, like Trump is with Obama. No wonder the Republicans love Lisa so much, since 92% of Republicans approve of Trump.

No thanks! Vote for Democrats in November, across the board!

Lisa
Mike makes a good point will you denounce the treasonous liar Trump and his disgusting regressive extreme right wing policies???
YES or NO ??? Pretty simple.

Lisa, please don’t respond to him it makes him feel relevant.

@mushack. Give us a break. Lisa has no way, any link to the republican national platform I am a wholly totally budget conscious voter with republican spirit , Until now.

Please quit your diatribes and broad brush paintings, Iand could even agree in voting come mber

Congratulations on your spectacularly vicious, partisan and disrespectful hit piece, Mike. Did you use Duff’s speechwriter to put this together? Your last paragraph alone contains a pretty complete laundry list of the partisan terminology that the radical left wing of your party has been inundating the American public with in ad nauseam for decades; well before Trump’s arrival. Guess what, Mike. Most folks aren’t buying it any longer. What makes your hit job even less relevant, Mike, is the fact that this is a municipal election not a national election.

support Lisa, she will serve the city and its residents well. servitude is what public office is all about.

Mike Mushak: have you no shame?

Yes I am another, after 50 years I have had enough I’m out, sold bye old friends,

@Victor Cavallo, I think a previous commenter above named Scott made it quite clear why no one should vote Republican this November:

I rest my case.

I hope everyone takes notice how Lisa has refused to answer my question.

Lisa
Mike makes a good point will you denounce the treasonous liar Trump and his disgusting regressive extreme right wing policies???
YES or NO ??? Pretty simple.

I guess that says it all about her views of Trump. It also is telling about how unresponsive she would be to the taxpayer if she was Mayor

Lisa Brinton is endorsed by the Republican Party that is standing by while the President threatens our democracy, puts kids in cages, mocks war veterans, and threatens violence against critics. If people who have no problem with that support you, and you are ok with it, you aren’t the person I want as mayor.

What Trump have to do with Norwalk elections,is Lisa and Harry ,sound to me someone don’t like the idea of a Woman mayor