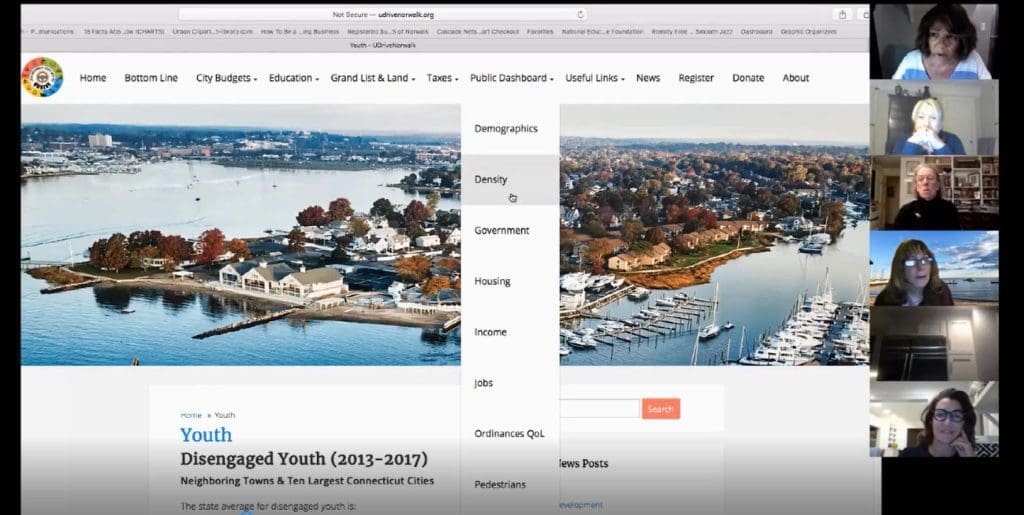 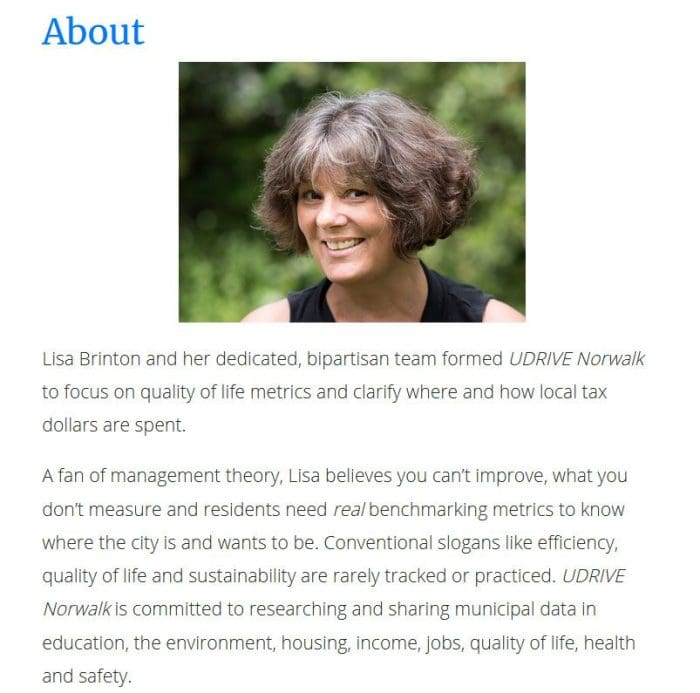 “New to elections, but not politics, she narrowly lost the 2019 mayoral election to the 3-term, former police chief incumbent,” Brinton’s website states. “She believes responsible management should prevail over cronyism or partisanship and her goal is to increase voter literacy, so they can demand better accountability and professionalism from city officials.”

“We’re a Political Action Committee, because, you know, if I did anything, the City would come after me and call me names. This is political,” Brinton said, unveiling the website and its intricacies in a recent Zoom call with supporters, including real estate broker Jason Milligan, who arrived late.

“Did you announce you’re running for Mayor again?” he asked.

UDrive focuses on statistics, many bolstering the points Brinton tried to make in her two Mayoral runs. It’s a dashboard – better than the Mayor’s dashboard, she said, because it offers “benchmark metrics of comparing Norwalk to other cities and towns around Connecticut.”

“Simply put, they’ve got nicer graphs and graphics, but it’s a snapshot in time. It doesn’t give you any historical data. And it doesn’t compare to anybody else. And so it’s good for propaganda, but it doesn’t really tell you anything.”

Rilling did not respond to an email on Friday seeking a comment. His dashboard went online a little over a year ago, and was an original, local production. “This information was not chosen because it made us look good, but rather, it was what we felt the public would be interested in seeing,” he said at the time.

The website is not a prelude to another Mayoral run, Brinton said Friday. “This is me getting benchmark city data into the hands of residents, much like what I did with Red Apples and education reform a decade ago.”

REd Apples was an education reform group with a website that also presented much data. Brinton often says her activism began with her children attending Norwalk Public Schools. She told her UDrive supporters, “I was a perpetual fundraiser for the 12-13 years my kids were in the school system. And I finally asked, why don’t we ever have enough money? And then you go back to our zoning policies and our housing policies.”

She said Friday, “Throughout my political activism in Norwalk, I’ve always operated under the premise of ‘the more you know.’”

“Formally, the ‘we’ is me, with Bryan Meek as the PAC Treasurer,  but there are a host of people contributing research data and helping with the website and social media – some of whom were on the Zoom Call,” she said Friday. “I expect the PAC to evolve in structure with some sort of formal bi-partisan advisory committee going forward.”

UDrive stands for Unaffiliated, Democrat, Republican and Independent Voters Engaged for Norwalk, the website states. It’s about “the bottom line about the bottom line,” Brinton told the 32 people attending her Zoom call.

“The bottom line is this: We seem to be struggling with policies that balance this administration’s desire to pursue density while maintaining our quality of life,” she said. “… What I’m hoping to do through this, and through the data that I’ve gathered, is trying to generate some meaningful conversation dialogue with the city in terms of really strategically looking at where we’re going, where we’re going.”

Isabelle Hargrove, attending the Oct. 8 call, said she was really excited about the “tool” the website represents.

“I think we’ve done a good job at identifying the problem, but we haven’t been able to come up with real tangible solutions,” Hargrove said. “… I think a website like this, with so much data, we can start to take it the next step into …how do we support policies and certain initiatives that will get us where we want to get.”

There are nearly 60 categories of information on UDrive’s site, from “auto mill rate” to “demographics” to “housing data” to “youth.” Some do not have entries yet.

From 2013 to 2017, “we had a higher percentage of disengaged youth,” Brinton said, attributing that information to town profiles on a State website, but with the caveat, “it doesn’t tell you how they qualify disengaged youth.”

Under “government,” she had her “biggest aha moment” when she realized Norwalk is underrepresented in Hartford, Brinton said.  Other cities have legislators that only represent their urban needs, but three of Norwalk’s five State Representatives also have constituents in the surrounding towns.

“So much of what’s happening in Norwalk is being driven by Hartford, and there doesn’t seem to be any pushback,” she said. “… We have been carved up and gerrymandered so much that we have only two full time only two dedicated representatives.”

“I intend to make a lot of noise about this,” she said.

The City tracks safety, “but it simply lists the number of callouts for EMS, fire calls and police calls,” she said. Using data from the State, “I put Norwalk in here with the 10 largest cities. And again, this data is from 2017…. yes, while our crime is going down, it’s not going down as quickly as say, Danbury, and Stamford. So it begs the question, you know, what are we doing?”

The “demographics” page uses data from the Connecticut Economic Resource Center (CERC) to describe Norwalk, not other towns. And while Brinton highlights an attempt to compare Norwalk to other communities, the “housing data” page largely compares Norwalk to Fairfield County and the state.

It’s when you get to “affordable housing percentage” that Norwalk is compared to other towns and cities, a detailed look at what she called “subsidized housing.”

“I was called a racist by our State Senator, but just simply trying to point out the math,” Brinton said in her Zoom meeting. 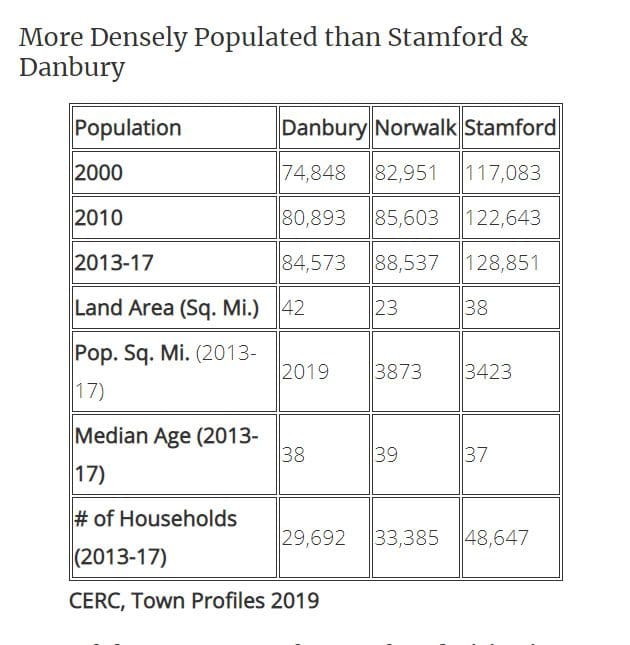 “With the influx in our immigration, what you have had is landlords subdividing and creating these illegal apartments because we don’t enforce ordinances,” she said. “But basically, you have had those landlords, and we call them slumlords, they are creating safety hazards, health hazards, because what they are doing is taking advantage of immigrants who will pay higher rates will not complain about their living conditions.”

Brinton stressed that she’s not against building more apartments but “the biggest issue that we’re fighting right now is density, or at least tasteful density.”

“I just recently downsized myself. I’m no longer in Rowayton,” she said. “I’m over here in Shorefront Park. I’m close to the city, I can see the hospital, I can see the Stroffolino Bridge, I see Vets Park. I like being in a more densely populated area.”

But, “these thousand-unit apartments, this tasteless stuff that I don’t know what it’s going to look like in 10 years, is scary,” she said. “…I have been supportive of more scaled building of apartments and units rather than these monstrosities.”

She said, “The sad thing is, Norwalk only pays attention at election time, every two years. And this Mayor said he was going to grow the population, and he won fair and square, you know, 900 more votes. And that might have been different. But, you know, he is doing exactly what he said he was going to do, which was bring on more apartments.”

“The fact that we got as close in the election as we did suggests that people really are starting to pay attention, and they’re seeing what’s going on. It’s not about party anymore. It’s about policy,” she said. “And, quite frankly, I think for many of us it’s starting to put some pressure back on the Common Council. I mean, I like to beat up Harry, but quite frankly, the Council approves all this stuff. They are complicit and they all are able to just kind of hide and that can’t be tolerated anymore.”

The writer of this article lives in affordable housing. This is not “subsidized” in terms of taxpayer-funded rent, but a discounted rent based on the area median income.

Lisa Brinton, second from left in the top row, begins the first UDrive Norwalk Zoom session on Oct. 8. She hopes to have one meeting a month, she said.

More knowledge makes for more responsible voting. It’s clear Lisa Briton loves Norwalk to put so much time, blood, sweat and tears into educating its taxpayers. Thank you for your efforts. UDRIVE Norwalk is an impressive website!

Information is a source of power. It’s why the average Norwalk taxpayer doesn’t know really important fact’s (“metrics”) about their city. It’s explains how they are easily manipulated by party politics, as the locals start food fights over nonsensical issues largely along political party lines that have little to do with our municipal government. They are the magicians tricks of distraction.

I applaud Lisa for this contribution to the education of every taxpaying Norwalk resident. Numbers in context can be extremely revealing. It’s why many successful companies use “key performance indicators” against benchmarks to strip away bias and clique advocacy to determine if strategy and/or tactics are working. They also often expose those who continue to protect failing practices and procedures for all the wrong reasons.

When the numbers are exposed – watch for who get’s defensive. Want to see an example? Just go back to the argument of costs per resident. Watch how quickly those who guard the local status quo go nuts when you ask – why does Danbury, with approximately the same number of residents, have a 2019-2020 budget of $261.5 million versus Norwalk $367.6 (almost 30% more)? Well to start – they only have one Mayor.

Or the utterly specious argument that population leads to jobs. On what planet? Mexico City would be one hot job market. Just as Bridgeport, New Haven, Hartford, and Waterbury would be in CT. Except – they are not.

I think the residents in this city would be shocked if they saw real figures about how this city has been managed over the past 7+ years. They can’t get the information from the mayors “dashboard” – which is all about “show” – but very little to do with “tell”. Covid19 is back on the rise, but as of last week – the mayors dashboard was still showing mid-July figures. Very helpful.

Those who watch closely realize we have no choice but to depend on a longtime local advocate for the city to tell everyone the truth – through facts & numbers – about what is really going on in this city. How it is changing. It should be refreshing and truly educational that Norwalk would get information without a political slant or spin. Because one thing is for certain in Norwalk, everything else is a narrative that is held hostage by those who protect the current administration – including social media pages, local blogs, and the local media. Long live truth.