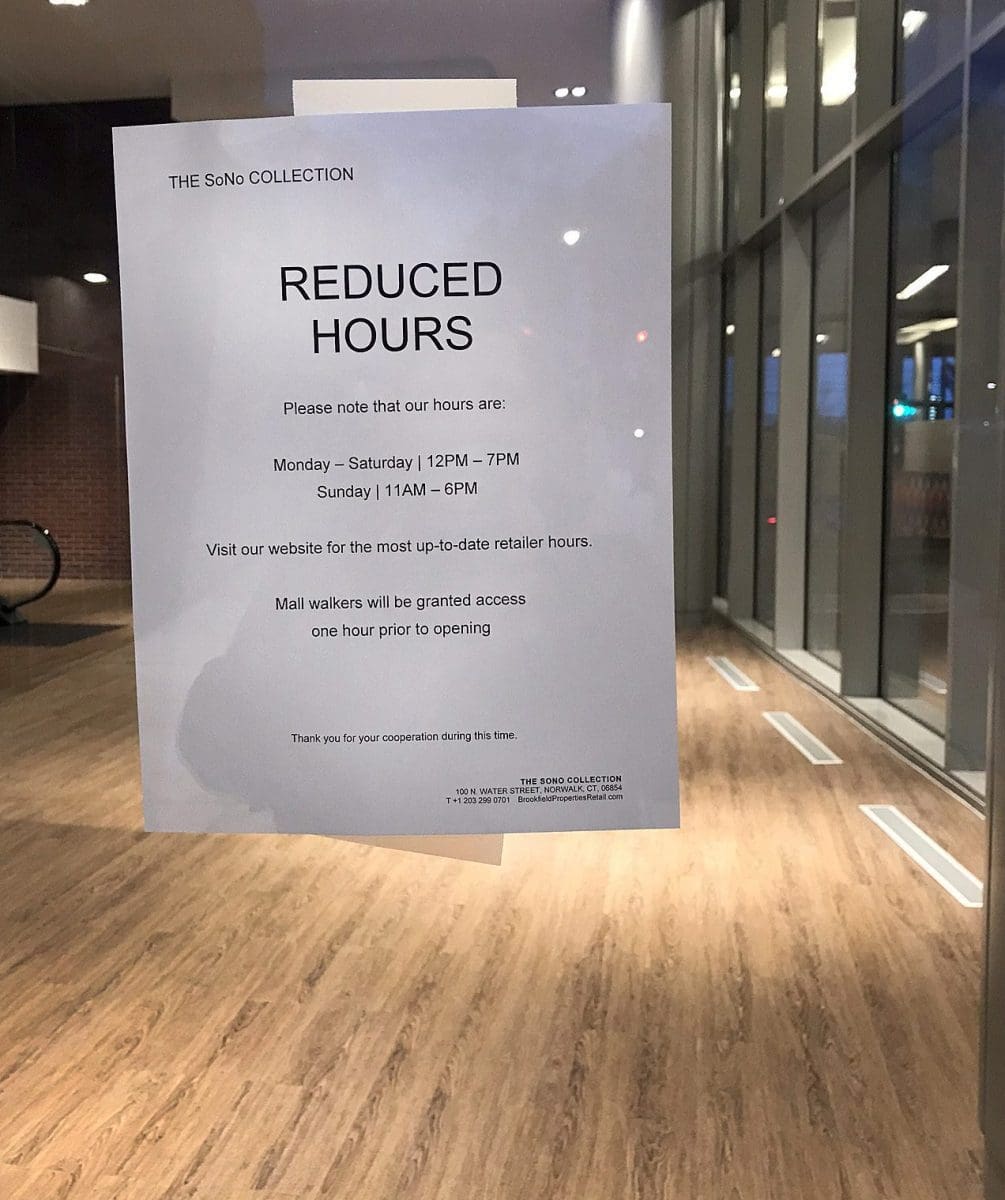 A sign in the window at The SoNo Collection, on March 16.

“Brookfield is doubling down on its contrarian bets on malls. It made an initial investment in GGP Inc. after the mall owner filed for bankruptcy protection and acquired the full company in 2018 for about $15 billion,” Bloomberg reports.

The SoNo Collection opened in October, though not with a full complement of stores. Nordstrom was open on the first day and Bloomingdale’s, the second anchor, came along in November. Many of the storefronts had yet to be filled when the mall shuttered on March 19, due to the coronavirus pandemic.

Brookfield representatives had said the mall was 90 percent leased and that the remainder of the stores should be open in the spring. The development was “absolutely” meeting expectations, Paul Madden, director of design for Brookfield Properties, said in January. Brookfield sold 81 percent of its interest in the mall in November, a net proceeds of $83 million.

Very few department stores are likely to survive, given the pandemic intensifying the problems of an already struggling industry, the New York Times reported April 21.

“Even Nordstrom, widely considered the healthiest department store, said this month that it could be facing a ‘distressed’ situation if its physical locations closed to customers for ‘an extended period of time,’” the Times story said.

Nordstrom is closing 16 of its 117 full-line stores while restructuring during the pandemic, Today reported Thursday.

“Brookfield is betting five billion bucks on retailers to make it through the COVID-19 pandemic,” ChainStoreAge reported Thursday.

The Toronto-based  Brookfield “has launched a ‘retail revitalization’ program that will focus on taking minority stakes in retail businesses that have been hit hard by the pandemic, according to a statement on Thursday,” Financial Post reported.

The non-controlling stakes will assist retailers “with their capital needs during this time of ‘dislocation,’” CNBC reported.

Brookfield will be billed $8.3 million in Norwalk property taxes for its mall this year. In the following five years, once the Enterprise Zone tax abatement kicks in, it will be billed $4.15 million.

Gov. Ned Lamont said Thursday that he expects consumers to go back to traditional retailers, and, “I know there’s going to be a place for malls going forward.”

Indra Nooyi, former chairman of PepsiCo, who is helping to lead the state’s efforts to start reopening non-essential businesses on May 20, also addressed the topic during Lamont’s Thursday press conference.

“Going to a mall or to a retail store was as much the experience of actually getting out of the house and walking around and experiencing things as it was actually buying the stuff,” Nooyi said. “…People are dying to get out and enjoy the outdoors and shop as they go along. And malls are an important part of that whole experience. So I think over the next few months and years, what you’ll see is retail coming back, all kinds of retail.”

It will take a while, she said.

“Until COVID disappears, you’re not going to find the congregation activities in the mall, the food courts, having lots of people, you know, big families interacting with each other, hugging each other, something I miss incredibly,” Nooyi said. “All of that is not going to be there until we have a vaccine, and everybody feels comfortable going back to life the way it was. So I think you’ll see increase in online (shopping). You’ll still see people going to retail and the malls but you’re going to see a little bit more of a social distancing and less of a community activity in these malls, which is sad indeed.”