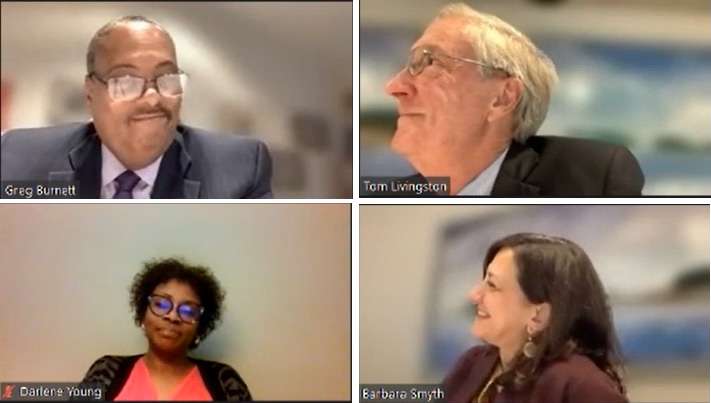 “As we prepare for the challenges that lay ahead of us and 2023, I’m hopeful and eagerly anticipating our planning for success, improvements and transformative impact that are on the horizon for our great city,” Burnett said. “I’m looking forward to joining forces and collaborating with each member of the Common Council, the mayor’s office and staff, and the Board of Education to enhance our joint concerted efforts, as we strive to continue to make Norwalk a safe, great community to live, work, and enjoy life for all residents.”

Burnett sought to be President last year but lost to Livingston in an 8-7 vote.

Young nominated him. After the vote, she said she was happy to be first to call him “President.”

“It’s not an easy job to step up and want to be to take on this role in leadership, it’s not easy to step up and say you want to be a Council member,” Young said. “… We do it together, as best we can, and try to steer the ship in the right direction for the city. I am just honored to be a part of this process.”

Meek is the lone Council Republican, appointed in June to replace Tom Keegan. He had no comment.

Burnett has been an At Large Council member since first winning election in November 2017, and Finance Committee Chairman all that time. He served on the Norwalk Board of Estimate and Taxation for four years before running for office.

Young was appointed to represent District B in December 2018 and has won election twice since then. She is Recreation and Parks Committee Chairwoman.

I still don’t understand the democratic monopoly!?😩 I guess the Democrats have a better oiled machine machine🦔🥵 happy🦃thanksgiving

Congratulations to all. I work closely with Greg and Darlene in the community. I know their hearts and have always appreciated their support. They are both very smart and have great integrity. They work very hard for the City of Norwalk. I worked with Brian my first term on the Board of Education. He is great with finance, as is Greg, and, in agreement or disagreement, we had respect across party lines.

So Bryan Meek is leader of himself?

It’s about time! Great leadership team! Congratulations to Greg and Darlene and best to Bryan.