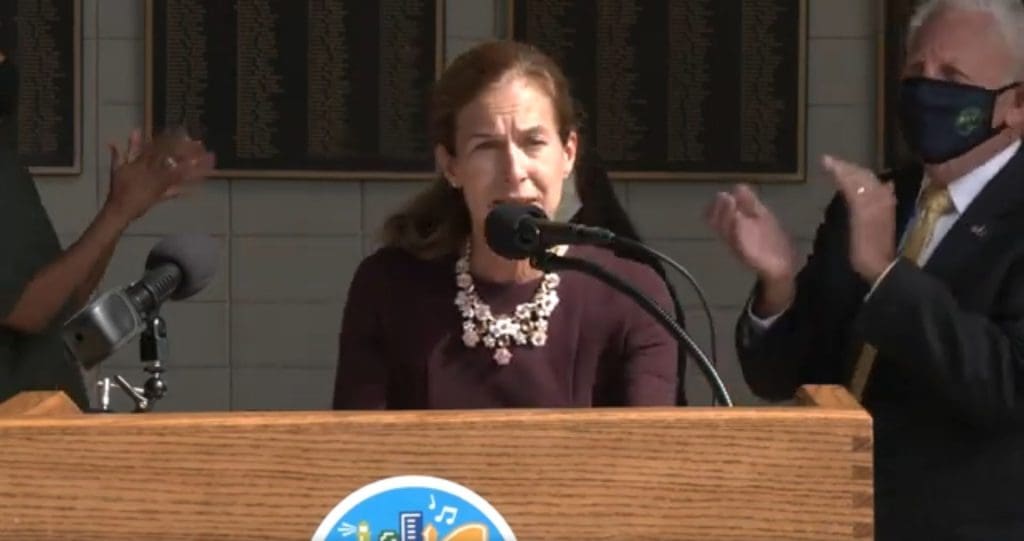 NORWALK, Conn. — Lt. Gov. Susan Bysiewicz visited Norwalk on Tuesday to thank Mayor Harry Rilling and Norwalk Public Schools for the way COVID-19 has been handled in the city.

“Norwalk is a prime example of what should be done to limit the spread of COVID-19 and keep residents safe,” Bysiewicz said, describing Norwalk as having “the fourth lowest case rate of the largest cities in the state.”

She also highlighted Gov. Ned Lamont’s emergency powers, expressing a hope that they will be extended again.

“Look back to July of this year, when we extended the powers till September, at that moment, there were only 38 people in the hospital was COVID. On September 20, Monday, we have 309 people in the hospital. And we know that the Delta variant continues to rage in our state, and we have a pandemic of the Delta variant within our unvaccinated residents. So we can’t let up,” Bysiewicz said.

“Just recently, probably within the last day or two, in sheer numbers, the pandemic of 2021 has taken more lives than the pandemic of 1918,” Rilling said. “So this is still a very scary time, difficult time. So we’re here to talk about what we can do and what Connecticut is doing.”

The City’s latest COVID-19 update says 100% of Norwalk citizens over the age of 65 are vaccinated and 73.5% of all residents have gotten at least one shot.

“That is really impressive,” Bysiewicz said. “And here’s something that is very, very stellar, almost 82% of our 12- to 17-year-olds in Norwalk have received at least one shot and Mayor, your city has the highest vaccination rate of any in any other city in town in the state.”

She thanked Norwalk teachers and administrators for “their rigorous efforts to keep kids safe and to ensure a safe and lasting return for the school year.”

“As a state, I’ll tell you that 2.3 million people have been vaccinated, 87% of adults 18 and over have been vaccinated,” Bysiewicz said. “And so the New York Times just recognized us as the top vaccinated state in the country. It was a little dicey. There we were number two, but we are back at number one.”

D’Amore said strong leadership at the State and municipal level “has been incredibly helpful and supportive and comforting.” She also thanked funding partners, volunteers and others.

She said, “At the beginning of May of this year, 53.12% of our total population had initiated vaccine, and 36.34% were fully vaccinated… amazing progress has occurred.”

Thomas said, “I am new to this State Rep. job and when the pandemic hit and I was receiving weekly briefings at the state level, I realized that Norwalk could very quickly fall behind and was interested in how we can get more shots and arms more quickly.” The City, under Rilling’s direction, has provided informational fliers in Spanish, Haitian Creole and English to reach as many people as possible.

She talks to many people and, “the one thing they always say is how fortunate they feel to live in Connecticut, with the leadership of the governor and the lieutenant governor,” Thomas continued.

“We will be convening next week in the house in the Senate to extend the Governor’s emergency executive orders,” Thomas said.

“If the legislature does not vote for an extension on the 27th and the 28th, then those powers will disappear,” Bysiewicz said. “And the three most important reasons to extend that, at least until January when the legislature comes back into session, is that we want to keep kids in school.”

Key to that is mandatory mask wearing and, “we want to make sure that the governor’s powers are flexible,” she continued. “And so the governor has been very clear that municipalities can issue their own mask orders. And clearly, the Mayor has done that here. And it’s … made Norwalk one of the safest cities in our state.”

Checks and balances were built into the latest extension given to Gov. Ned Lamont’s emergency powers, and House and Senate leadership can object, Thomas said. “It’s very different from what happened last year. And I think the public should feel comfortable that they have a voice through their leadership in the House and Senate.”

There are conversations on both sides of the aisle about how long the emergency powers should be extended and most people feel they should continue into the next legislative session, Thomas said. If it’s defined by law, then whatever is set is set, with no flexibility for changing circumstances. “The issue is, the governor has more flexibility, as we’ve heard to respond to things on the ground move quickly, move forward, move backward.”

Maybe she’ll visit Whole Foods, where if you walk to the back corner of the store you can take your mask off because you will be in Westport. Because, science.

A Democrat wants to extend emergency powers….what a surprise.
And Mayor, did you bother to consider that during the Spanish flu in 1918 the US population was less than 1/3 of what it is today? That fact is pretty important when comparing the two. Of course, don’t let facts or logic get in the way of your agenda.

Just more Cloward and Piven strategy. Overwhelming the system, crashing it, blaming it and transforming it.

Read American Marxism by Mark Levin. See chapter 7 for what you can do.

Lt. Governor swings thru CT taking pictures. She adds little else to the mix. Waste of time covering this. Let’s stick to what the heck is wrong with our School System