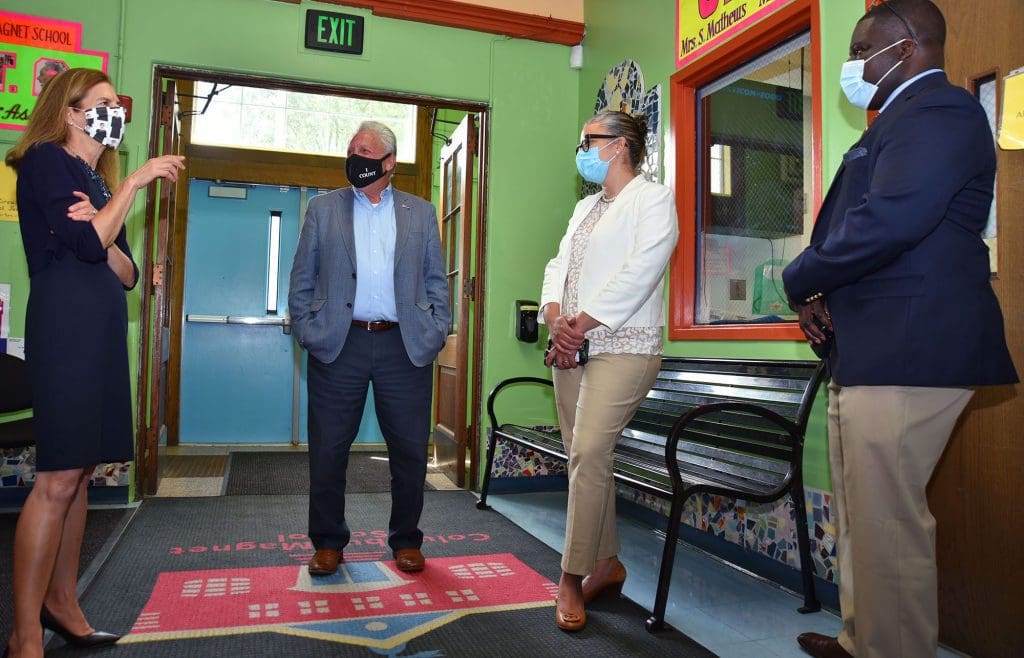 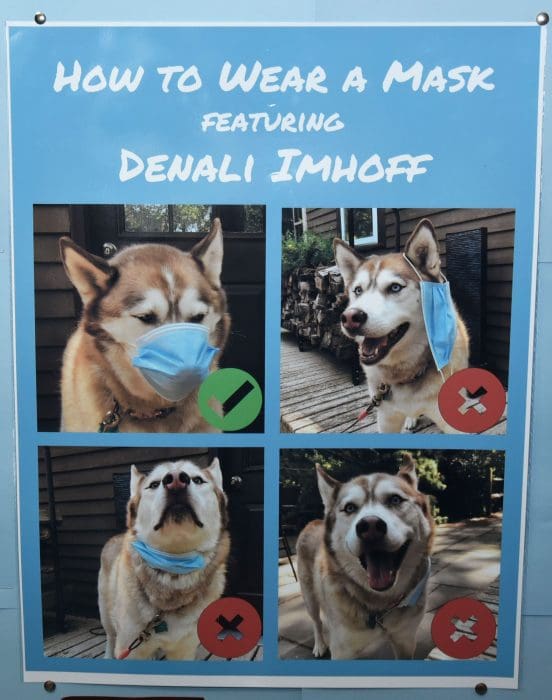 NORWALK, Conn. — Norwalk’s Democratic leaders met with Lt. Gov. Susan Bysiewicz on Wednesday for a tour of Columbus Magnet School and an update on the schools reopening.

“I’ve had the opportunity to visit schools across the state, from Vernon to New Britain to Meriden, to see how the schools reopening are going,” Bysiewicz said. “And what’s very nice to hear from (Norwalk Superintendent of Schools Alexandra Estrella) is that, as families see what protections have been put in place to protect students and teachers, that families are now wanting to send their kids who are learning at home, back into the classroom.”

“The children who are remote are starting to ask to come back to face to face because yes, they are missing their friends and parents are more comfortable with the protocols that we have in place,” Columbus Magnet School Principal Medard Thomas said. “And so, of course, we don’t fault the parents for wanting to keep their kids at home. But there’s more flexibility… they understand a little bit more that we are very responsible with safety protocols and so hopefully things will come back to normal. Hopefully soon.” 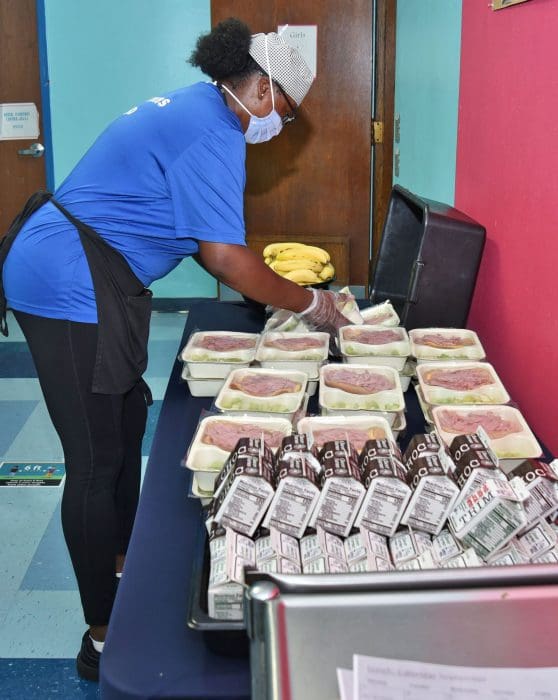 Amber Ashley, lead in the Columbus Magnet School’s kitchen, preps meals Wednesday. The gymnasium-cafeteria is currently closed, so all meals have to be distributed throughout the building. She estimates that will be 250-300 meals a day. The meals are packaged elsewhere and delivered to the school. (Harold F. Cobin)

Thomas said there had been “no tears whatsoever” when the kids returned to Columbus, “even with our kindergarteners, because what we’ve done prep the kids well in advance…children were receiving videos and emails from our teachers.”

“It was a very seamless opening,” he said. “…Everyone was cooperative.”

All the Norwalk’s elementary schools have classes in their buildings five days a week, with some students participating at home via the Internet.

Mayor Harry Rilling said that on Tuesday, he had two of his grandchildren in his home, doing distance learning lessons with their school in Trumbull.

“I would send them back, too,” he said. “…It’s a challenge to keep them focused but they do it. I was very impressed with the teacher who encouraged the kids.”

One of the children is in third grade and the other in seventh grade, and Trumbull has them attending in-person Thursday and Friday, Rilling said.

“That is like a parent’s nightmare, right?” Bysiewicz said. 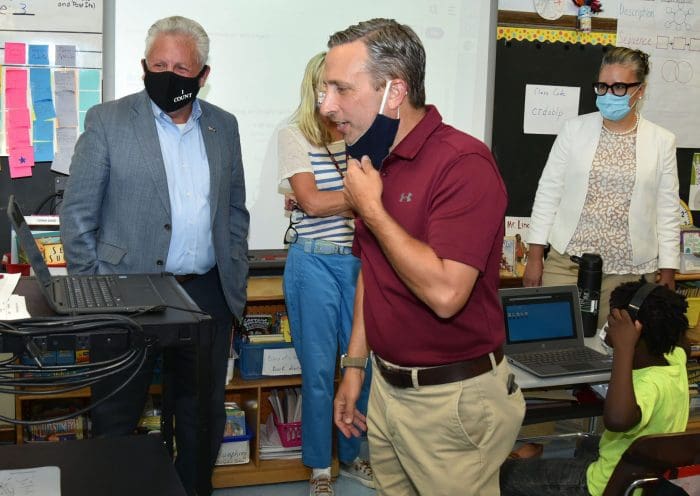 Norwalk’s middle and high school students come two days in-person, and on one day schools are closed for cleaning, Estrella said. With younger children, “childcare is a factor that we have to take into consideration and also they learn better when they are in person and engaging with the teachers. So we have 60 percent of the overall population in person and like you said earlier every day we have more and more families asking if they could change their decision.”

Bysiewicz said this is a consistent theme statewide.

“Our state has lost 45,000 childcare spots during the pandemic,” Bysiewicz said. “Those people who have small businesses just went out of the business.”

But, at Columbus, “I can tell by how the kids are doing and the teachers are doing that people are really the students and the teachers are happy to be back and they seem very engaged,” Bysiewicz said. “I know that a lot of thought was put into keeping the kids safe – so the desks are six feet apart, the littlest kids through the oldest kids are wearing masks, which is a great thing. I saw kids learn, being reminded to wash their hands, which is great, and everybody seems to be learning.” 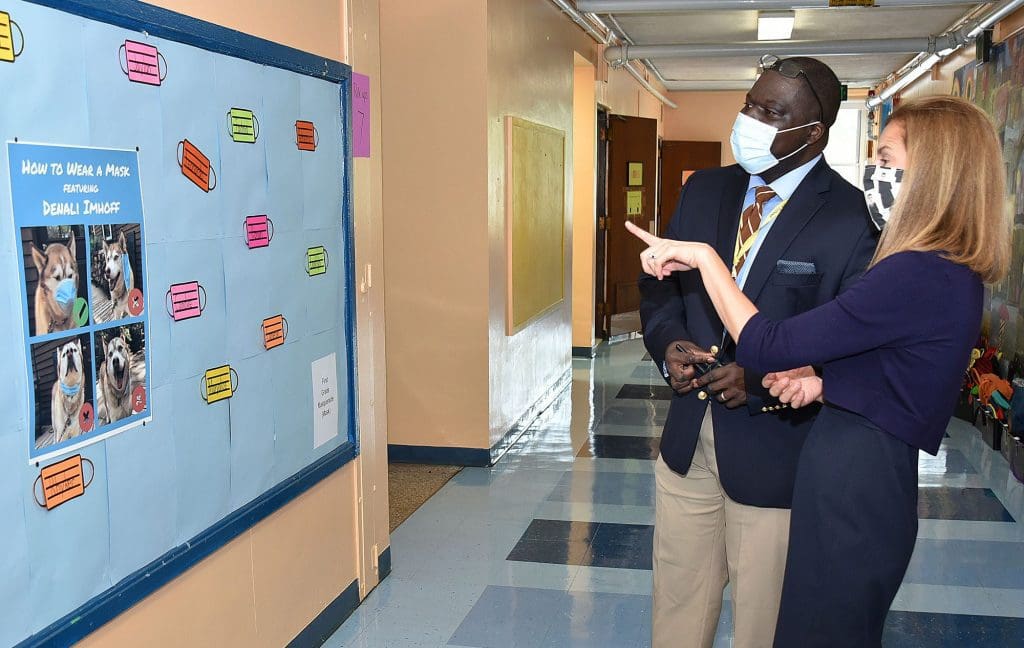 A picture is worth a thousand words.
Bob Duff- from the “Put a mask on!” fear-mongering far left- has his mask pulled down, while a student is clearly sitting less than six feet behind him!
Such a hypocrite.

Nice to see the attention being given the opening of the new school year. I’m sure it wasn’t an easy mission getting everything planned & completed before the kids arrived. A big thank you to everyone involved.

The mayors grandchildren are in Trumbull schools? I guess that say something…just do not know what, but I can guess.
When (not if) the virus rears its ugly head and King Ned shuts down the state again,Susan and the other pols will go into hiding.

@DryAsABone. It says his kids live in a different town. Not much more than that. Many kids move when they grow up. BTW – Harry’s Grandchildren went to Columbus… Story at 11…

The big story is this school is still called Columbus. Surprised Harry and Bob didn’t change the name in the middle of the night.

Yup. They live in a diffent town.

I will add that it is a recurring theme.
Next door in Stamford the old mayor (later governor) sent his kids to private schools, for various reasons. He supported “public schools” for votes but the kids went to private schools and colleges.
I find it amusing is all I am going to say but will add that anyone foolish enough to buy that tripe deserves what they get. Maine will figure it out at some point!

And finally… always trust your officials:

“BALDWIN, N.Y. (CBSNewYork) -An administrative error by a federal agency led to the mistaken killing of nearly 100 geese at a Long Island pond.
…The USDA says the geese were humanely euthanized and the meat provided to local food banks.”

I just heard that one school in Stamford,next door, closed. They did not even make it through the week and typically were affected on a Friday.
Just the beginning.