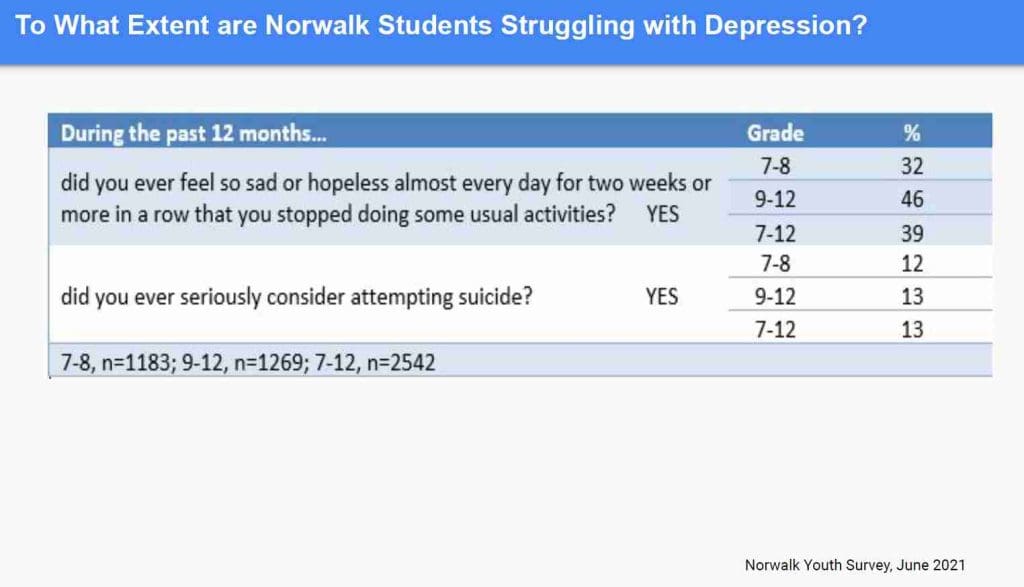 A slide from The Norwalk Partnership.

NORWALK, Conn. — Newly released data measuring the effects of the pandemic on the mental health of America’s youth lends a national perspective to similar data gathered locally by The Norwalk Partnership.

Both present a dire depiction of teenagers struggling.

According to the new data, gathered in 2021 by the Centers for Disease Control and Prevention, more than a third (37%) of high school students reported experiencing poor mental health during the COVID-19 pandemic, and 44% reported persistent feelings of sadness or hopelessness during the past year.

A similar study by The Norwalk Partnership that focused on seventh to twelfth graders, found 39% reported experiencing depression – 32% of middle school kids and 46% of high school students.

“It was basically a third of all middle schoolers and almost half of high schoolers,” Margaret Watt, Prevention Director at Positive Directions said. But the “really terrifying” statistic revealed 13% had had suicidal ideation in the last year, and 7% of them had made an attempt. “In fact, 1% had actually made multiple attempts.”

The CDC’s data was gathered from January to June last year, in a survey of 128 schools scattered across all 50 states. Responses considered valid by the CDC’s criteria – with more than 20 of the 110 survey questions answered – totaled 7,705. “The school response rate was 38%, the student response rate was 48%, and the overall response rate was 18%,” the CDC said.

The Norwalk Partnership’s survey was done in June 2021 and drew 2,542 responses from Norwalk Public School students. The breakdown is as follows:

In its outline of “severe challenges” encountered by young responders during the pandemic, the CDC found:

More than half (55%) reported they experienced emotional abuse by a parent or other adult in the home, including swearing at, insulting, or putting down the student.

Even before the pandemic, teen mental health had been in decline, the CDC states. “These data echo a cry for help,” Acting Principal Deputy Director Debra Houry said in a statement. “The COVID-19 pandemic has created traumatic stressors that have the potential to further erode students’ mental wellbeing. Our research shows that surrounding youth with the proper support can reverse these trends and help our youth now and in the future.”

“In addition, over a third (36%) of students said they experienced racism before or during the COVID-19 pandemic.”

School connectedness, “a sense of being cared for, supported, and belonging at school … had an important effect on students during a time of severe disruption,” the CDC concluded.

“Youth who felt connected to adults and peers at school were significantly less likely than those who did not to report persistent feelings of sadness or hopelessness (35% vs. 53%); that they seriously considered attempting suicide (14% vs. 26%); or attempted suicide (6% vs. 12%). However, fewer than half (47%) of youth reported feeling close to people at school during the pandemic.” 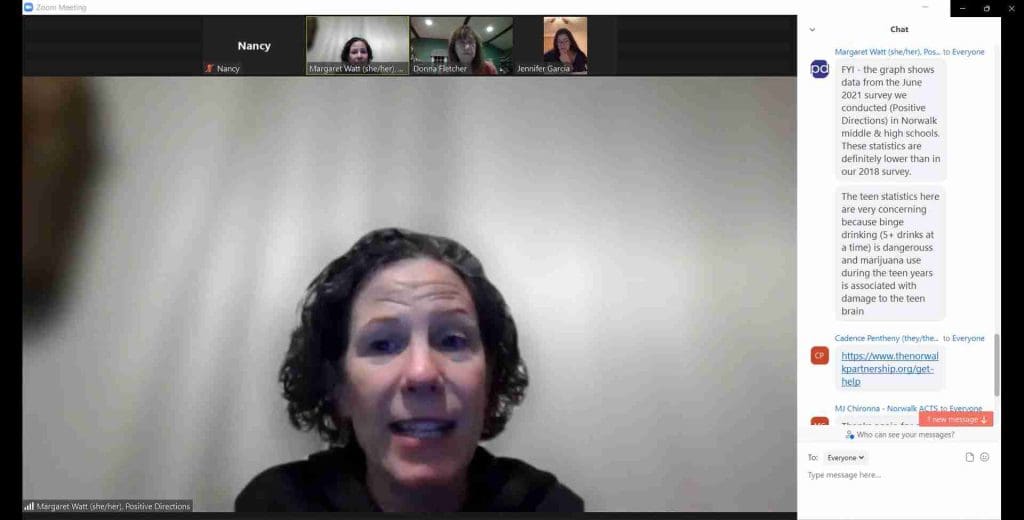 Screengrab from a January Zoom presentation from The Norwalk Partnership. Speaking is Margaret Watt, Prevention Director at Positive Directions – The Center for Prevention and Counseling.

The Norwalk Partnership’s data dive was financed by a grant from Drug Free Communities. Local youth were asked about stress, and relationships with teachers, family, friends. Their response shows “about three quarters found the pandemic very stressful. More than half do not feel connected to other kids at school.”

Of the 2,542 youth responding to the local survey, 29% identified as LGBTQ. Among them, 70% of “LGB” and 76% of transexual kids reported being depressed, she said.

Norwalk hadn’t “lost any kids this past year. But addressing suicidality and depression is just absolutely critical,” she said.

Alcohol remains the most consumed substance, with 15% of 7th-12th graders drinking. Among seniors, that figure climbs to nearly one in four.

Among students who drink, one in three vapes and one in five uses marijuana.

Those with the highest rates are LGBTQ students, as well as those who are depressed, female, enrolled in special education, and experiencing ﬁnancial strain.

Watt attributed the drop in substance abuse compared with 2018 to a lack of opportunities and social isolation. “I will say, however, I conducted this same survey in a couple of other towns and rates … were actually quite concerning in some of those towns, so this is good for us in Norwalk.”

The 2018 survey, which focused on every other grade, found 40 percent of Norwalk juniors drinking, “a third higher than the state average for juniors at that time,” she said. “So these rates are really quite a bit lower. However, those who drink also use other substances, including 10% of those who drink also misusing prescription drugs. And we have significantly higher rates … for the LGBTQ population, students with depression, special ed, financial strain, and girls.”

In focus groups, youth also reported the same opinions about drinking at the beach or on school properties, Watt said.

Today’s marijuana is “genetically engineered to be way stronger than anything anyone may have experienced back in their own school years” and the teens are “susceptible to a six-to-eight-point IQ loss, there is (an) increased chance – significant increased chance – of addiction, increased chance of psychosis. It’s quite risky,” Watt said.

The social host law says that “if underage miners are drinking on your property or on property that you control, whether you own or rent it, whether or not you knew about it, you can be held liable for it,” she explained.

Violators can be fined or even go to prison, she said. 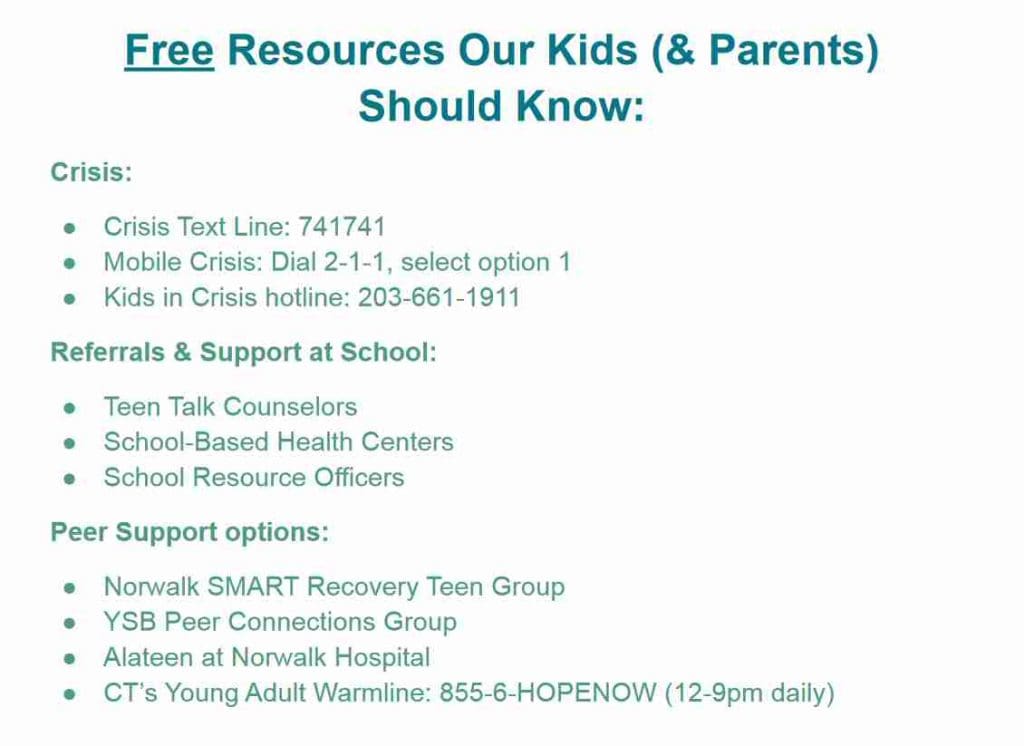 A slide from The Norwalk Partnership.

What can be done?

“With so much depression out there, and so much suicidality, it’s unrealistic to think that everyone is going to go have a counselor, right? Number one, there aren’t enough. Number two, it just it’s not logical, right? We have to create a healthier environment,” Watt said.

She spoke of friendship benches and the need for a teen center. She also recommends lighting and increased police patrols at the beach after hours, and perhaps signage to raise awareness among adults.

As for high-risk groups, she asked, “Can we have gender neutral bathrooms all over the city? Can we have signs that say ‘All are welcome here’?”

In January, The Norwalk Partnership held a forum to address the study results.

Cadence Pentheny, a community educator at the Triangle Community Center, sought to raise awareness “about what it means to be LGBTQ plus,” and gender identity.

“It’s really important that we really name that LGBTQ-plus people are not struggling because of who they are, but due to the negative treatment they are experiencing just for that,” she said. “…They’re experiencing firsthand bullying and discrimination, and you know, violence and these things happening to them, or even just perceived, right, we live in a world in which we’re constantly inundated with this information.”

If youth are “struggling so much, why would they choose to have this experience if it was a choice, right?” Pentheny said.

“One of the things to think about is are we asking our kids what pronouns they want to use,” Watt said.

Denique Weidema-Lewis, Norwalk ACTS Director of Equity and Collaborative Action, recommended the Suicide Prevention Lifeline at 800-563-4086; in July, people will be able to simply dial 988.

Watt recommended a guide of resources:

People need to be open to getting professional help, said Gail Melanson, Executive Director of the Mid-Fairfield Child Guidance Center. “You have to remember, it’s extremely common for children to need help with mental health issues and nothing to be embarrassed about, or for yourself.

“A healthy mind is as important to a child’s development as a healthy body. Mental health plays a critical role in shaping a child’s social, emotional and cognitive development. A mental health professional can introduce treatment and therapies that can help your child live a happier, healthier, safer and more productive life.”

Can we not say transexual? if you’re trying to send a useful message that you care about queer people, don’t think we don’t notice when you haven’t bothered to even learn our language.

Nancy, thank you so much for highlighting the important needs we’re seeing among our youth. I wanted to add that there are *two* important numbers people should know: the National Suicide Prevention LifeLine is 800-273-8255, and CT’s substance use hotline is 800-563-4086.

I’m also excited to share that we’re organizing “NorWALK for Mental Health” on Saturday May 7th for kids and families to raise the visibility of this issue in a fun way while also connecting people to resources. Hope everyone will join! Info will be posted on http://www.thenorwalkpartnership.org today.

Hey, at least they didn’t catch a cold, or what essentially amounts to a mild case of the flu for 99.9 percent of children. Amazing how all of the do gooders still want our children to wear masks and hide in our basements like our fearless leader Joe Biden. Meanwhile all of the data and “science” is now proving that more damage was done to our children and society writ large by our draconian preventive measures than by the virus itself. While I do agree with what we did at the beginning, and perhaps through most of 2020, everything after that has resulted in more mental illness, suicide, drug addition, overdoses, and other medical deaths of people who either were afraid, or told they must wait for the care they needed at the time. Let’s hope we learned something from this debacle.

The toll from Covid upon seniors and old folks is likely even greater owing to self imposed isolation and limited outside ventures to go shopping, etc. Hopefully we have better co-ordination between Federal, State and Local gov’t when the next Pandemic arrives. And less self aggrandizement and political gobbledygook. When major challenges arise we’re suppose to act as the United States. Not as warning political parties with different Covid messages/admonitions.

Over 1 million died of Covid in the US – that’s 330 9/11s, and that’s based on excess deaths – our per capita rate was 3x higher than Canada’s despite our having a per capita GDP 20% higher. Sadly, I know of teenagers who now don’t have a dad because he pigheadedly followed the advice of the antivaxxers and snake oil salesman who said this was just a cold. And no one is requiring masks anymore . Btw the death rate has come down of late but still more than 600 people died of COVID yesterday In the words of Daniel Moynihaneverybody’s entitled to their own opinion but not their own set of facts

And when will the government and districts do something about this? As usual, they will react when the numbers get too high. Did they really think business as usual was the right answer? When these kids went back to school there was ZERO SEL and student check ins. All district and government cares about is test scores. None of them care about student, teacher, admin and parents well being, Just test scores. As usual, they will be reactive instead of proactive. How about government, city officials and superintendents go and spend time in the trenches? Have them see more support is needed to help students deal with social skills, conflict resolution and increase empathy. Nope, never. They will continue to sit in their offices and guess what is best.